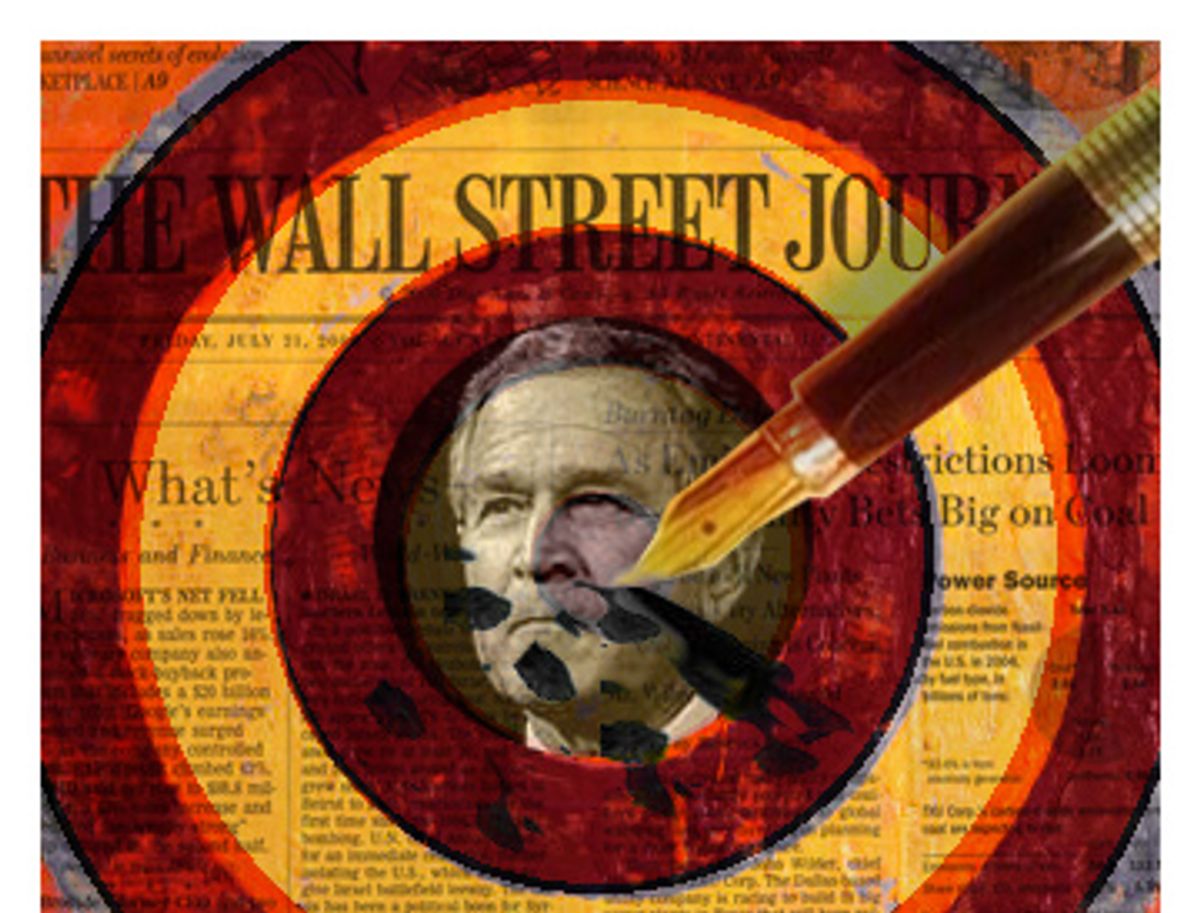 Extreme hypocrisy is far too common to take note of every time one sees it, but sometimes it is so jaw-dropping that it can't be ignored. A remarkably petulant column on today's Wall St. Journal Op-Ed page is a prime example.

Its author is Bush supporter Peter Berkowitz, a law professor at George Mason University (he's also a Senior Giuliani advisor -- see update below). Berkowitz's complaint is that "Bush hatred" is so very pervasive yet is so very unjustified, and he frets about "the damage hatred inflicts on the intellect." While he acknowledges that some past Presidents were also hated, he claims "Bush hatred is different," as it's "distinguished by the pride intellectuals have taken in their hatred, openly endorsing it as a virtue." The only specific aspect of Berkowitz's argument worth noting is how typically self-absorbed it is.

As is so often the case for whining right-wing polemicists with pretenses of high-minded grievances, the whole column is actually about him and his bruised little ego. His entire "argument" is nothing more than the by-product of what he perceives to be the oh-so-unfair treatment to which he was personally subjected during two petty social events -- once at a 2004 dinner of "several distinguished progressive scholars, journalists, and policy analysts" where everyone was mean to him because he defended Bush, and a second time at a Princeton panel earlier this year when fellow panelists criticized him for defending Bush. He harbors such a grudge over how mean people were to him on those two occasions that he has converted his anger into some sort of national crisis whereby Bush critics must learn "to discipline their passions and make them an ally of their reason."

But the far more significant aspect of this whole spectacle is that the WSJ Editors -- of all people -- have the audacity to publish a lecture on the grave harms of hatred towards the President. This is the Editorial Page that, throughout the 1990s, did more to infect and degrade our public discourse than anyone this side of Rush Limbaugh and Matt Drudge. But the WSJ Editors were actually far worse than Limbaugh and Drudge, because they put a stamp of establishment journalistic credibility on those rancid dirt-mongers, elevating them to the realm of the credible and influential.

Entire books could be written on the defamatory filth disseminated by the WSJ Editors throughout the 1990s. One excellent book that covered that topic in some depth is The Hunting of the President, by Joe Conason and Gene Lyons. But in light of Berkowitz's self-involved civility sermon this morning, it is worth reminding ourselves of just some of the profound hate-mongering and truly deranged accusations that regularly spewed from those same pages during the Clinton presidency.

First, in November of 2003, Ken Auletta in The New Yorker described the repugnant reaction to Vince Foster's death from WSJ Editorial Page Editor Robert Bartley, whom Foster partially blamed in his suicide note [via LEXIS (WSJ Editorials not available online)]:


In the Clinton era, the tone of Bartley's page became more shrill. A federal judge was characterized as "Osama's Favorite Judge," and Tom Daschle, then the Democratic Majority Leader, was "the Senate's most accomplished holdup man." Bartley treated Whitewater as if it were Watergate, devoting to it what turned out to be more than three thousand pages of editorial and op-ed columns, which were later anthologized in six volumes.

The page attacked deputy White House counsel Vincent Foster, who killed himself not long after an editorial appeared with the headline "Who is Vincent Foster?" He left a note blaming Washington for making "sport" out of politics and singling out the Journal: "The WSJ editors lie without consequence."

After the suicide, a Bartley editorial called for a special counsel to investigate Foster's death as a possible murder, and the last sentence read, "If he was driven to take his life by purely personal despair, a serious investigation should share this conclusion so that he can be appropriately mourned."

In Salon in 2002, Eric Boehlert focused on the specific dirt-peddling of one particular WSJ editor:


The piece [linking Saddam with the Oklahoma City bombing] was written by Micah Morrison, a senior editorial writer at the Journal who gained a certain notoriety during the Clinton years by chasing all sorts of conspiracy theories, most notably that as governor of Arkansas, Clinton was somehow associated with a drug running operation out of a remote airport in Mena, Ark.

The Journal Op-Ed page routinely included false trash such as this, summarized by The Washington Times in October, 1996:


David Hale, the central Whitewater witness, predicts in his first prison interview -- "it's a certainty" -- that Hillary Rodham Clinton is going to be indicted after the election, according to the Wall Street Journal.

The aforementioned Gene Lyons, who -- as a journalist for the Arkansas Democrat-Gazette -- tirelessly covered the Journal's rapid descent into the Rush Limbaugh Sewer, wrote in 1996 about the Editors' obsession with insinuating that Clinton bore responsibility for the murder of two teenagers in Mena, Arkansas on railroad tracks (Correction: the following was written by the Arkansas Democrat-Gazette's conservative Editorial page, not by Lyons):


The decline and fall of a great editorial page is a sad thing to watch, particularly when there seems no more stopping it than the onset of delirium tremens in an old friend who just can't stay off the stuff. The stuff in this case is the theory that Arkansas is one big conspiracy, and the old friend is one of the country's most prestigious and once most reliable editorial pages -- the Wall Street Journal's.

Animosity towards Bush is based almost exclusively on the policies he has implemented as President. Berkowitz all but acknowledges this, as the social events that have so upset him primarily involved his defense of Bush policies and strong reactions from critics -- little things like starting a war based on false pretenses, introducing torture to our country, spying on Americans in violation of our laws, etc. Indeed, Berkowitz describes the claims of the anti-Bush panelists who were mean to him this way:


They argued [that] Bush hatred was fully warranted considering his theft of the 2000 election in Florida with the aid of the Supreme Court's decision in Bush v. Gore; his politicization of national security by making the invasion of Iraq an issue in the 2002 midterm elections; and his shredding of the Constitution to authorize the torture of enemy combatants.

By rather critical contrast, the WSJ Editors who today published Berkowitz's self-righteous screed spent the decade tearing down a President based on the most baseless and patently false smears. And they even explicitly defended the baselessness of their Drudge-like accusations. Their very own Peggy Noonan inadvertently articulated the WSJ's motto during the Clinton presidency with her incomparably corrupt justification for spewing all sorts of fantasies about the Clintons:


Was Mr. Clinton being blackmailed? The Starr report tells us of what the president said to Monica Lewinsky about their telephone sex: that there was reason to believe that they were monitored by a foreign intelligence service. Naturally the service would have taped the calls, to use in the blackmail of the president. Maybe it was Mr. Castro's intelligence service, or that of a Castro friend.

This was all driven by an unbridled and pure hatred that was as ugly and personal as it was fact-free. The WSJ Editors bear primary responsibility for the fact that a lowly, filth-peddling gossip like Matt Drudge is the "Walter Cronkite of our era" and that Rush Limbaugh's filth is now par for our political course. All of that is bad enough. But to have to listen to them send forth into the world sermons against "Bush hatred" is really just way too much to bear.

UPDATE: As Thomas C notes in comments, Berkowitz is an official Foreign Policy Advisor to the campaign of Rupert Murdoch's favorite candidate, Rudy Giuliani, the well-known Beacon of Civility. Berkowitz is not a mere advisor to Giuliani; he's the "Senior Statecraft, Human Rights and Freedom Advisor."

This obviously relevant fact is something the WSJ didn't bother to disclose when publishing Berkowitz's Op-Ed on "Bush hatred." It looks the like WSJ has already stepped it up in the journalistic ethics competition to ensure that they stay ahead of their sister outlet, Fox News.

UPDATE II: So very unsurprisingly, Professor Berkowitz seems driven in life by a bruised ego. This conservative stalwart commenced and then pursued extremely protracted litigation against Harvard when he was denied tenure in 1997 (h/t teho). His entire lawsuit was eventually dismissed in 2003.

Berkowitz's presidential candidate loves to boast about his devotion to "tort reform" -- complaining about "frivolous lawsuits" and expensive "abuse of lawsuits". But Berkowitz happily takes advantage of the legal system to drag Harvard through expensive litigation all because he was denied tenure -- just like the aggressive tort-reformer Rick Santorum, who supported all sorts of legislation designed to limit personal injury and malpractice lawsuits for other people, all after his wife sued her chiropractor for $500,000 and collected $350,000. The greatest petulance and self-absorption is always found among our self-reliance sermonizing tough guys.

UPDATE III: Ironically, The Washington Post this morning has a front-page article reporting that the one thing the leading GOP candidates have in common -- including Berkowitz's Giuliani -- is their propensity for expressing crowd-pleasing contempt for Hillary Clinton:


They mock her proposals, utter her name with a sneer and win standing ovations by ridiculing her ideas as un-American, even socialistic. She has become the one thing the Republican candidates for president can agree on.

Earlier this year, the senator from New York was the subject of an occasional laugh line from former New York mayor Rudolph W. Giuliani. Now, the trickle has become a torrent as the leading GOP candidates seek to one-up one another in a Clinton-bashing contest aimed at energizing their party faithful.

"The competition inside the GOP for who's the most anti-Hillary is going to pay dividends," said Greg Strimple, a GOP pollster and consultant who is not working with any presidential campaign. "Looking for that piece of anti-Hillary energy is what you're seeing right now."

The crux of today's Republican Party is, more or less, driven exclusively by animosity of this sort. It's defined far more by common hatred of Enemies, foreign and especially domestic, than by any affirmative ideas. It is the Party of Rush Limbaugh, and few things are more absurd than listening to their adherents lecture the world on how distorting and bad the emotion of hatred is.

UPDATE IV: Speaking of absurd right-wing hypocrites motivated in life by a bruised ego, reader TD emails to remind me of the $1 million personal injury lawsuit against the Yale Club filed several months ago by conservative tough guy Robert Bork. Bork "is claiming that he fell while trying to step onto a dais to speak" and claims "the absence of a handrail or stairs caused him to fall." He "suffered" a "hematoma" (i.e., a bruise) on his leg, which burst. Needless to say, Bork is a long-time advocate of tort reform.

UPDATE V: Who could ever find anything to hate in this, on the day Peter Jennings (reading from a White House Press release) said Bush was to give his "end-of-the-war-in-Iraq speech"? Throughout the ABC News story, reporter Bob Woodruff refers to the war in the past tense ("Peter, the President landed in a plane that is called a Viking S-3B" that "in this particular war, was used to re-fuel other fighter airplanes"). At the end, Jennings said: "tonight, the President is going to describe how the war has essentially, if not officially, ended." Terry Moran then said in his report that the President, in his speech, would try to "sum up what he believes the war achieved."