Barack Obama and Hillary Clinton may be trading salvos over their international credentials, but the Democratic presidential contenders are really a united front. 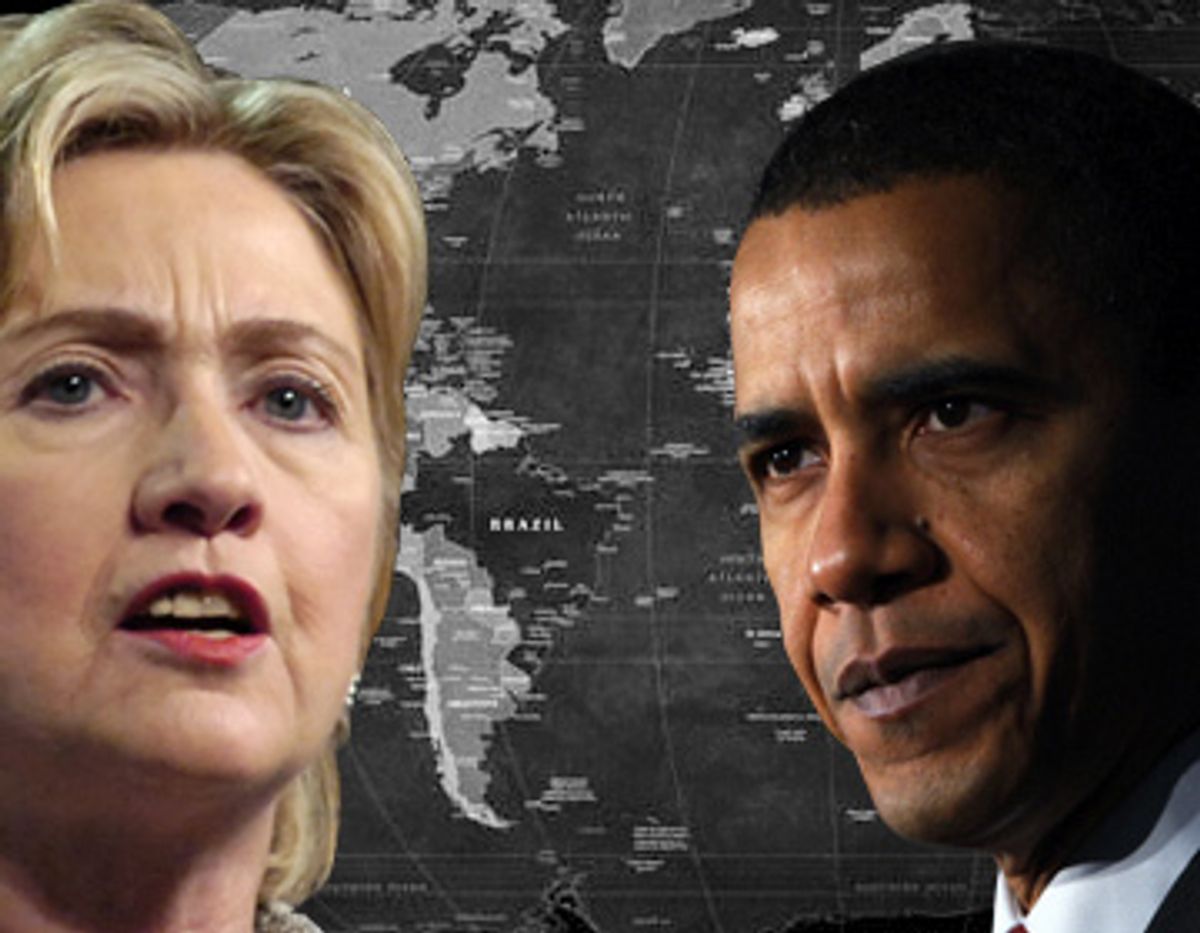 Speaking at the Bluegrass Cafe (right down the street from Crystal's Cowlick Beauty Salon) Monday night, Hillary Clinton promised, "As soon as I'm elected, I'm going to ask distinguished Americans in both parties to travel around the world on my behalf with a very simple message: The era of cowboy diplomacy is over."

Responding to a question at an American Legion hall in Manchester, N.H., Monday afternoon, Bill Richardson declared, "We have to find ways again where American diplomacy is not considered cowboy diplomacy, but is considered diplomacy where we're not the policemen of the world, but the conscience of the world."

Without calling for a formal investigation by the Plagiarism Police, it is safe to conclude that there is an eerie similarity here. But the probable cause is not rhetorical shoplifting, but the nearly unprecedented similarity in the foreign-policy positions of the major Democratic contenders. Seven years of George W. Bush has achieved something thought impossible during the Cold War or even during the 2004 primary campaigns -- he has united the Democrats on national security.

"I don't really know where these Democrats are on foreign policy," said Michael Mandelbaum, professor of American foreign policy at Johns Hopkins School of Advanced International Studies. "I don't know what John Edwards' foreign policy will be. I can't predict Barack Obama's. And the fact that it is so hard for someone like me to find these differences tells you something."

Even as they search for an issue to differentiate themselves from their rivals, members of the Democratic presidential class of '08 will admit, when pressed, that they are all singing from the same hymn book on foreign policy. That leaves them to argue over who is most qualified, like Joe Biden in this Salon interview, or, like Clinton and Obama, who are turning the topic into a blood sport.

"Rhetorically, in terms of what people say they want to do, there probably is not that much difference," conceded Chris Dodd in an interview Saturday in Marshalltown, Iowa. "People certainly agree on diplomacy and certainly agree on utilizing those other tools in our arsenal. But the fault line is experience in foreign policy."

The definition of "experience" became a high-decibel campaign issue Tuesday as Clinton and Obama hurled brickbats at each other across Iowa. The former first lady had sneered at Obama's decision on Monday to stress his childhood years in Indonesia as part of his foreign-policy credentials. In a campaign speech in Shenandoah (ballyhooed in a press release issued by her campaign), Clinton sniped, "Voters will judge whether living in a foreign country at the age of 10 prepares one to face the big complex international challenges the next president will face."

The Obama campaign quickly issued a response that echoed comments that the first-term Illinois senator has been regularly making on the stump in Iowa. "Two guys named Dick Cheney and Donald Rumsfeld have the longest résumés in Washington," Obama declared Sunday afternoon in Cedar Falls, "but they led us into the biggest foreign-policy disaster in a generation." Tuesday's press statement from Obama spokesman Bill Burton upped the ante by adding Hillary Clinton's name to the roster of those responsible for the folly of the Iraq war. (Clinton, along with Edwards, Dodd and Joe Biden, voted for the 2002 resolution granting Bush authority to launch the invasion. Obama publicly opposed the conflict.)

More than anything, this flap suggested that the knotted Democratic race in Iowa has entered its mean season with major candidates hurling irresponsible charges on the off chance that they will stick. In truth, it should be hard for an internationalist Democrat to argue that Obama's experience living in Indonesia as a child is irrelevant to understanding the Muslim world. In symbolic terms, no Democrat (in fact, no serious presidential contender in American history) can match Obama's half-Kenya-and-half-Kansas heritage.

In Grundy Center Sunday night, I asked Obama in an interview to sketch out the practical benefits to America in having a president with roots on two other continents (a father from Africa, a childhood partly in Asia). "As president," he said, "I think that means not only do people give me the benefit of the doubt, but it means that I can challenge some of the conventional wisdom in other countries and push for U.S. interests in these other countries in a way that other president cannot do."

What makes the Clinton-Obama pie fight so off-putting is that, by conventional reckoning, both candidates are gilding their résumés. Obama, after all, just three years ago was still serving in that crucible of international affairs -- the Illinois state Senate.

Clinton, meanwhile, often portrays her White House years as a major foreign-policy credential, as she did Tuesday in Shenandoah: "I have traveled the world on behalf of our country -- first in the White House with my husband and now as a senator. I've met with countless world leaders and know many of them personally." Underestimating Hillary Clinton's knowledge is a mug's game akin to belittling Warren Buffett's stock-market ability, but the former first lady's global itinerary was partly a consolation prize. She had been shut out of domestic policymaking following the failure of healthcare reform in 1994. Travel also became her therapy after the embarrassment of the Monica Lewinsky scandal.

If formal foreign-policy credentials matter, there is a compelling case to be made for the three oft ignored second-tier candidates competing in the Iowa caucuses. Richardson touts his tenure as U.N. ambassador and his record as a globetrotting hostage negotiator. For Dodd, who was first elected to Congress in 1974, it is his decades on the Senate Foreign Relations Committee, dating back to his efforts to end the American-backed war in Nicaragua in the 1980s. But they are trumped by Biden, the chairman of the Senate Foreign Relations Committee, who probably now would be secretary of state if 60,000 Ohio voters had opted for John Kerry in 2004 rather than a second Bush term.

For 90 minutes Monday morning over coffee at the Marriott Hotel in downtown Des Moines, I chatted with a relaxed Biden, who was wearing a blazer and an open-necked blue shirt, about foreign policy. While no presidential candidate can ever be laid-back and natural six weeks before the Iowa caucuses, Biden, when he occasionally expressed frustration, directed his ire not at his single-digit status in the polls, but at the intellectual void at the center of the Democratic national-security debate.

"There is a patina of a [Democratic] foreign policy that rests on 'I'll negotiate and not go to war,'" the six-term Delaware senator said. "That's about it. But when it gets beyond that into what is your foreign policy -- what is the essence of it? what are the basic principles? -- it gets kind of murky." Biden's complaint is that his Democratic rivals are fixated on having positions on individual countries rather than articulating an overall global vision. As he put it, "The distinction that I try to pick out among the other Democrats is that, as they debate one another, it's all tactics. I have not seen any strategic difference."

The ultimate challenge for a campaign consultant would be to create a 30-second TV spot based on the slogan, "They have tactics, but I have a strategy." But while Biden's argument does not fit into familiar dove-or-hawk ideological niches, it does have the virtue of coming close to describing the Democratic intramural political reality.

When asked about the political mantra that the Democrats constantly risk electoral defeat by seeming weak on national security, Biden briefly addressed the explosive question of whether Hillary Clinton's gender points her toward the hawkish side of the spectrum. "I admit that under our sexist society it is probably more difficult for a woman to be able to communicate that [toughness]," he said. "I think that Hillary communicates resolve and toughness alone. I wish she didn't think that she had to sign onto some of this other stuff." He meant, among other things, Clinton's vote for the Kyl-Lieberman resolution branding Iran's Revolutionary Guard a terrorist group.

With a Democratic nominee likely to be chosen in little more than three months, sorting out the field is no longer an exercise reserved for political junkies. Even if the Democrats agree on general themes -- disengaging militarily from Iraq, reengaging with the world and waging a more targeted fight against terrorism -- they each would behave differently in the White House when (not if) they are confronted with an unexpected crisis.

As Mandelbaum, the author of the recently published "Democracy's Good Name," put it, "Things are going to happen -- and that's when you get back to presidential character and temperament. My sense is that there are inevitably real differences among the Democratic candidates. But we will probably only know them when it's too late."