"The message is so powerful, in spite of my shortcomings"

As he tells Salon in an interview, even Ron Paul is surprised by his spontaneous, self-organizing presidential campaign. And he still hasn't seen "V for Vendetta." 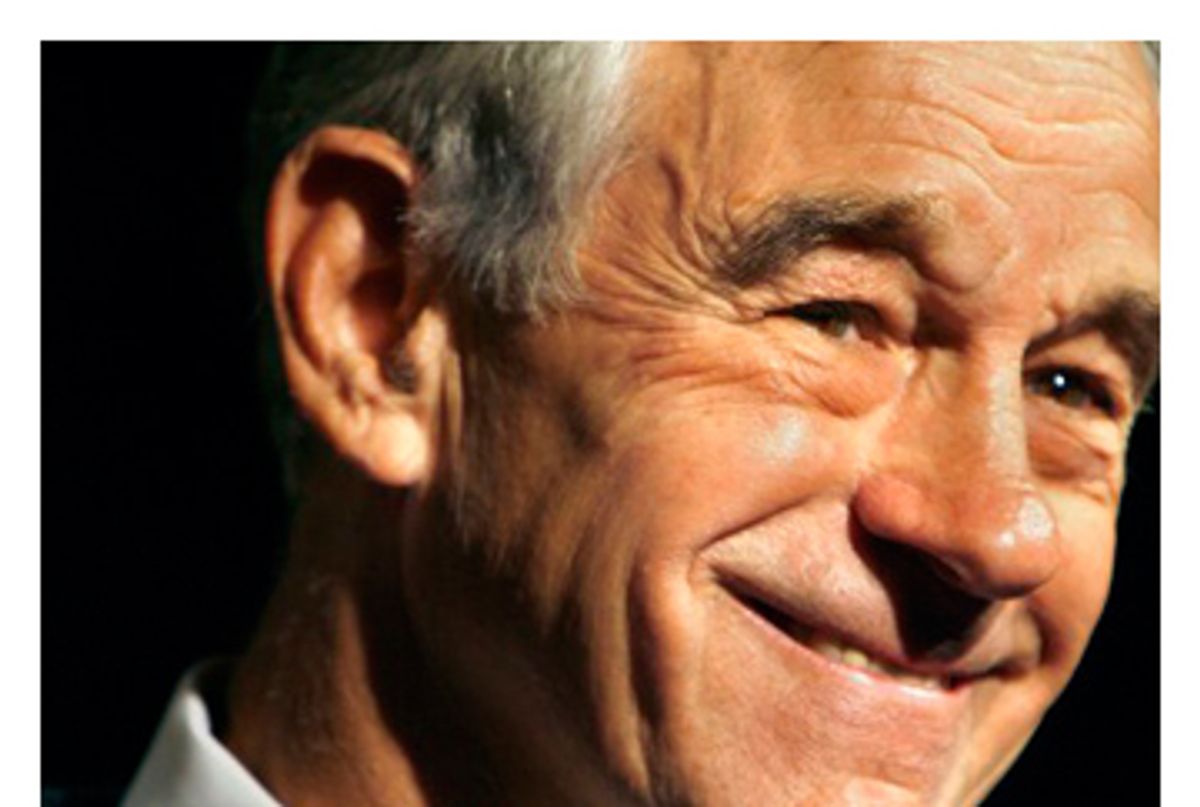 Texas congressman and Republican presidential contender Ron Paul took some time out of a busy campaign schedule Saturday to speak with Salon. As a blistering winter wind swirled outside, we spoke about Howard Dean, Guy Fawkes, his thoughts on a third-party run, and the legacy he hopes to leave behind.

What has changed in terms of the reception you have gotten online and in fundraising since the summer?

Well, it keeps growing, and it's growing exponentially. It's still impressive. It's hard to tell exactly where it will end, but certainly there is a lot of room for optimism.

If we have enough time to get the message out, [we] could win. If we run out of time, of course, hopefully we have a big impact on addressing the real problems of this country and what the solutions ought to be.

I see a lot of parallels between the reception you are getting, especially the online motivation, and what was happening to Howard Dean in 2003. Of course you could still win, but he was able to build out of that response a sustained movement. There are organizations like Democracy for America that are still around. He was able to continue as a national leader, even though he lost. Do you see that possibility?

Philosophically, I hope we can do a lot better, because not many people identify him with getting the war over with. You know, what's left? That was how he became well known. He took a stronger position. And the longer it went and the more he wanted to move up the political ladder, the less antiwar he became. So I would hope that what we are doing is bringing many people from the left as well as the right together to have ultimately a significant change in foreign policy.

Is the New Hampshire primary especially important for your candidacy?

I think it's important for everybody in every campaign. If you do exceptionally well here, you can get a bigger spotlight.

I spoke with one of the state pollsters, who works for the University of New Hampshire poll. In a recent poll of likely Republican primary voters, they asked, "Would you consider voting for Ron Paul?" The pollster told me there is a significant percentage of likely Republican voters, around 60 percent, who said they would not vote for you under any circumstances. He said a lot of that has to do with the war. The war is still very popular among early voters in the Republican primary.

They probably just talked to earlier voters. That's not very relevant in this state. It's a small number. The people who were against the war didn't vote last time, and those are the people who were not on the lists. So what about all the independents and the Democrats who are sick of the whole thing? So I don't think it is a very relevant poll you are quoting, if I understand it correctly.

So you expect clearly for a significant amount of your turnout to be independents and Democrats?

Well, if half the people in this state are independent, I would think that you would have to consider them.

You were asked this in the debate, but I wanted to follow up. Do you think right now, looking at the other Republican candidates, you will be able to support one of them, assuming you do not win the nomination?

Not unless they change their policies. I couldn't support them if I disagree with everything they stand for.

And you said at the last debate that you have no plan for running in a third party, or anything like that.

Is that the same as a denial, or is that different from "I will not run"?

Well, I guess those are the words that I can say with as much force as I can. I have no intention of doing it.

In terms of the fundraising, I was at an event earlier today right after you spoke at the Radisson Hotel in Manchester. There were about 40 people in a room above the Murphy's Taproom pub on Elm Street in Manchester. No one from the campaign was there, and they were handing out packets [to do canvassing]...

Who was it for?

For you. It was your supporters.

Did they even invite me?

They were from Arizona, New York.

In Manchester. They had organized by themselves. They had gotten lists from the campaign and they were going over to knock on doors in Bedford.

OK, I guess I did meet some of them.

That's a powerful message. That's the way it's operating. It's spontaneous. It's a message. People are organizing and it's not a surprise -- well not a surprise that we know it's happening now. But it's a delightful surprise to see a campaign run like this. You couldn't have asked for more.

Have you seen the movie "V for Vendetta"?

[Paul shakes his head no.]

Do you know much about Guy Fawkes?

What was your reaction when you found out that was the rallying cry for the Nov. 5 fundraiser? [The fundraiser, which brought in $4.3 million in one day from roughly 38,000 donors, was organized independently of the campaign by online supporters. It was pegged to a 17th century plot against the British government referenced in the popular 2005 movie "V for Vendetta." Guy Fawkes and other conspirators had planned to blow up Parliament on Nov. 5, 1605.]

The reaction because of the day they picked? I didn't analyze it all that much. I don't think we are voting on Guy Fawkes. [laughter] I don't think he was the issue. Someone was looking for an interesting angle. It sounded like it was a pretty good P.R. angle.

How much of the response do you owe to your very clear stand on the war, and how much of it do you owe to the economic issues you have been talking about for a long time, the government philosophy?

I say that the most important introductory position that I hold, to get people to listen to me and to find out more about me, is the war. That doesn't solidify the support but they tell me because I talk to them at a lot of the rallies: "You got my attention on the war, and then I go to your Web site and I look at the whole program." Then there is a significant segment of people who have studied and learned and knew something about the monetary issue. That was a real sleeper issue. I knew it was important. But I didn't realize how many people. I get a lot of applause on going after the Federal Reserve on a college campus as I do on going after the war, which is to me astounding.

You are a result of how politics is changing with the Internet. How do you see in five or 10 years from now, whether or not you win, this country moving because of these technological changes, this ability for people to mobilize themselves? How does politics change?

The technology is absolutely secondary. It's a vehicle. It's a tool. The driving force is the philosophy. It just happens that the two have come together. Our country has gone astray. There are all kinds of problems. People are hurting. They want something new. The philosophy comes along. We offer this. And it's a potential solution. People are interested, and then the vehicle just happens to be the Internet. So it has come together. So many politicians come to me: "How do we harness the Internet to go after this, or these successful politicians?" It's not going to work. It's totally unrelated. I mean, there is the vehicle and there is the problem. People call us, because they are so naive, they'll call us and say, "We have some Internet lists. We'd like to rent them to you." Internet lists? They think we rent lists to go out and solicit people. But they solicit us, because of the philosophy, because of the problem, they put this together. It is not just the vehicle, the Internet. That is the tool to solve the problem, and it has been a very useful tool.

The Internet has been very helpful, but you have to realize that if you don't do it in a major party, you are excluded. It's hard to get on ballots. The system is biased against us. And also in 25 years, or 20 years, there has been a lot of hard intellectual work done. There has been a whole generation of people that have come along, studying monetary policy, studying the Constitution. Home-schoolers have spread. In the early 1980s, the laws were adamantly opposed to home schooling. So you have had more home schooling, more private schooling, more Internet teaching, groups like the [Ludwig von] Mises Institute. All this has had an influence. So we have had a generation of intellectual groundwork that has again helped make the tool that much more valuable.

So you are optimistic for the next generation, the people coming up?

Oh, yeah. I'm impressed that the campaign is seen as being very, very positive, and a lot of hope, even though we talk about all of our problems. That to me is sort of somebody is looking down on us, as though they have given us a minor miracle. We can moan and groan and everybody walks away, but we feel good because we see some hope.

What was the biggest surprise of the last six months? What was the time that you turned to your wife and said, "I can't believe that the campaign is taking off like this"?

Well, there was one moment that I knew something was different, even though there have been many -- the Nov. 5 [fundraiser] and all this. But it was early on. It was probably three days after the first debate [in May]. I had a small rally, a little fundraiser. We thought we could get 100 or 200 people out in Austin, Texas. And all of a sudden there were like 600 people there. And it was a result of the debate. Because it was the first time that a large number of people [had heard my message]. I thought I did a lousy job, and I only had four minutes, and all I had to do was shout a few lines. The message is so powerful, in spite of my shortcomings, that the people came out. And I thought, well, this thing is different. I've never had this before. That to me was a real eye opener.