Meghan McCain is not Chelsea Clinton

No fear and a little loathing on the campaign trail with the 23-year-old daughter of Republican candidate John McCain. 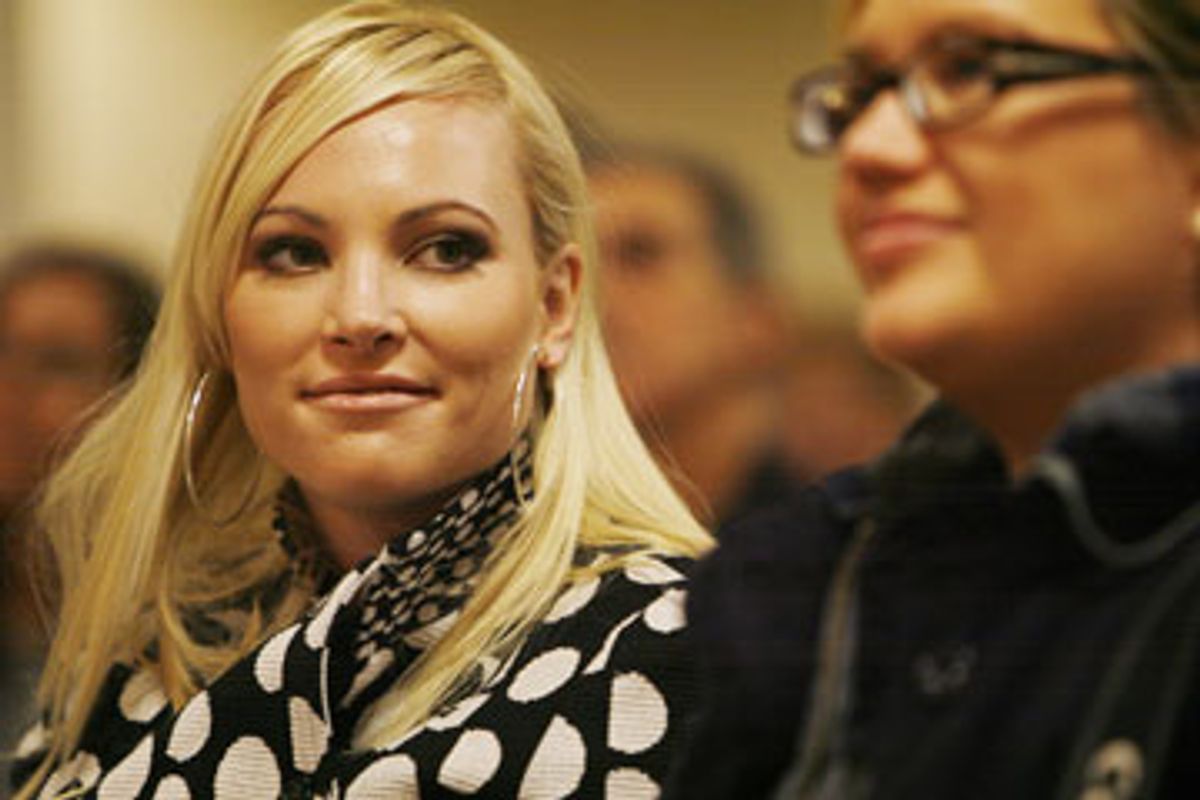 There is only one proper place for the candidate's daughter, sunny and smiling behind mom or dad on the stump, in the campaign ad, on election night as confetti rains down. Everything else is out of place, and fraught with danger. In American politics, the candidate's daughter has no right to thoughts, desires or a life of her own.

These rules are brutally enforced by the media. If one of the Bush twins gets drunk in college, falling over and straddling a girlfriend's leg, the camera snaps rock the tabloids, prompting a national dialog about underage drinking. If Chelsea Clinton goes to work for a hedge fund, she calls her mom's commitment to the poor into question. And nothing more needs to be said about Alexandra Kerry's see-through mishap on the Cannes red carpet, or Mary Cheney's attraction to women, or that time Ashley Biden was arrested for obstructing a police officer outside a North Side bar in Chicago.

So the question must be raised: What exactly is Meghan McCain, the 23-year old daughter of Republican candidate John McCain, thinking as she makes her way through the backstage passageways at her father's MTV/MySpace forum? Dressed to impress, in black knee-high boots, she moves on a mission, sometimes a Diet Coke in hand, a mini-entourage of friends swirling around: a photographer, a videographer, and a close pal, La-Toria Haven, who happens to be wearing a vintage campaign button from the 1972 McGovern campaign, with the anti-war message "Come Home America." Collectively, they are the team that produces McCainBlogette.com, one daughter's experiment in citizen journalism, a behind-the-scenes glimpse of a young person's life on the campaign trail.

In the brutal, dehumanizing, free-fire-zone of presidential politics, this is exactly the kind of thing that is never allowed: A candidate's daughter doing her own thing. It's acceptable if Sarah Huckabee, the 25-year-old daughter of the Iowa frontrunner, works herself to the bone as her father's field director. It makes sense when Chelsea, 27, hits the trail to stand behind mom Hillary in an attempt to counteract the Oprah effect. Even Cate Edwards, 25, can get away with helping dad John pack supplies at a food pantry on the eve of Thanksgiving. But how does Meghan McCain fit in? One recent blog entry praised songs by Tupac Shakur, the Black Rebel Motorcycle Club, and something called "Sex Bomb" by the German orchestra leader Max Raabe.

If she wants to blog according to the rules, she should be doing what the Romney sons do in their "Five Brothers Blog," i.e., unending chirpy cheerleading. Writes oldest son Tagg in one entry, "Now is the time for all of our readers to step up to the plate and help us win the nomination." Go Team Romney! Meghan should be acting as a campaign prop, delivering the message of the day -- No Surrender! Straight Talk! The Surge Works! -- but instead she is working the room with a crew that sports a tongue stud and an oversized anti-war campaign pin from 1972.

In other words, she tries to do what she wants, which means, in her case, entries about having fun on the campaign trail, as the official campaign staff nervously eyes her from a distance. "I thought there are probably a lot of people out there who have no idea what a campaign is like, what it looks like, what a campaign feels like," she says of the inspiration for her blog, which is funded and operated independent from the campaign. "I wanted to show my friends and people that so much about politics and so much happens behind the scenes."

And that is what you get on McCain Bloggette -- ephemera, not politics or policy. The girls post photos of "Dad," the candidate, having his makeup done in the pre-debate green room. Then there are shots of Meghan and her friend Haven, the vintage pin collector, sunning on the airport runway in South Carolina, or belting karaoke with campaign staff in Dubuque. From the blog: "[S]ome friends from the campaign invited us to join them at a karaoke bar down the street and we decided to go, clad in our pajamas. In true karaoke fashion, I proceeded to butcher 'New York, New York' and La-Toria and Heather gave their best attempt at 'Celebrate.'"

In one post, Meghan displays a star tattoo on her right foot. In another, she notes that her boots were made by Giuseppe Zanotti, a lapsed disc jockey turned shoe designer from San Mauro Pascoli, Italy. It is, in other words, the blog of a 23-year-old devoted to Dad who happens to be on the campaign trail -- not the blog of a candidate's daughter who has joined the campaign. "My parents didn't make me scared of the world. I'm not scared," Meghan explains. "I mean people are going to judge you anyway, so I would rather just let people judge me on my own terms."

In exchange for taking this treacherous path, Meghan and the girls have been duly punished online. To blog as a woman is hard enough. To blog as a blonde woman in politics who boasts about her own fashion sense is harder. Comparisons to Paris Hilton and other professional ditzes are emailed with some frequency. When the blog debuted, the snide Washington gossip site Wonkette headlined its post, "Dept. of Your Blog Sucks." The snarky "ladyblog" Jezebel mock-gushed, "Boy is she blonde!" Another blog editorialized, "It reads like bad Vogue, or Chicken Soup for the Campaign Daughter's Soul."

But then Meghan has been around this block before, and she chooses to ignore the bad vibes. "I can't read things that are mean to me or mean to my family," she says. Even before puberty, she was thrust in front of a camera at the 1996 Republican National Convention, in an American flag print outfit that she disapproves of to this day. In 2000, when her father ran an insurgent Republican primary campaign, the prospect of her having a hypothetical abortion became the subject of national political chatter. "It's the really sick part of politics," Meghan explains. "Everybody Googles everybody when they go on a date with them. I got set up with a guy a few years ago. He was like, 'Is it really true that people asked about your hypothetical abortion?' I was like, this is a fun date."

The idea for the blog began last summer, after Meghan graduated Columbia with a degree in Art History and internships at Newsweek and "Saturday Night Live" under her belt. Her younger brother Jimmy, 19, had enlisted in the Marine Corps and was preparing to ship overseas. Her brother Jack, 21, was about to enter his junior year at the Naval Academy, and her little sister Bridget, 16, was still in high school in Arizona. Her three older siblings, from her father's first marriage, all had school, jobs and family to occupy them. She alone wanted to find a way to spend her time on her father's campaign, but she wanted to do it on her own terms.

"I knew I wanted to help out, but I just didn't know what to do," she remembers. So, with Haven, she started reading old campaign books. She read the fictional "Primary Colors," the non-fiction but drug-enhanced "Fear and Loathing on the Campaign Trail '72." They watched "Journeys With George," Alexandra Pelosi's documentary of the 2000 Bush campaign. By September, the idea of a blog had started to congeal. "She did not want it to be an extension of the campaign," remembers Cindy McCain, the candidate's wife and Meghan's mother. But that was alright. "The only message that I have ever encouraged any of my children to listen to and live by is just be yourself," says Cindy. "John's maverick attitude is very much what Meghan is about also."

And so the project was green-lighted, and the traveling McCain campaign staff was told to incorporate a traveling troupe of as many as four young women on the road, with near-total access to the candidate. Editing for the site is done remotely, by a former McCain staffer who does not currently work on the campaign. But when Meghan speaks to the press, as in this article, a campaign minder tags along.

"Very heavy," deadpans father McCain, 71, when asked what he thinks of the blog. He then shoots a knowing look to his spokeswoman. "Some of it is hard for me to understand. A lot of heavy issues, you know." But does he approve of his daughter showing off her tattoo and boasting about her taste for Tom Waits? "She's having fun," he continues. "I want her to enjoy the campaign. It's once in a lifetime. And then I want her to get a job."

Cindy McCain said she wanted to make sure that Meghan was ready for the flak that might come. "The only thing that was ever discussed with Meghan," she says, "was making sure that she understood by upping her public profile she was upping herself as a target."

Back at the MTV forum, she does not seem to be worrying about such things. Just a few days earlier, she had done a standup interview with Sway, a dreadlocked MTV news correspondent, in which she talked about how much Red Bull she drank. "It can get really tense. It's so serious all the time. The sky is always falling," she said about the professional reporters and staffers on the campaign. Now backstage, she races around, all-access pass dangling, chatting up the crowd and setting up shots with her camera ladies. MTV correspondent Gideon Yago stops to chat with her. John Norris, MTV's ageless newsman in tight jeans and blond curls, does a standup with her. Meghan McCain is having fun, with just weeks to go before Iowa and New Hampshire. She is not sure if it will help her father win the election.

"One thing I was trying to do is show that I have my own personality, and I am real. And I think people respond to authenticity," she says, reciting the McCain family motto. "People come up to me all the time and say, 'I love your blog.' So I don't know if it is influencing voters, but it is influencing people."

This sort of sentiment is heresy in a multimillion dollar presidential campaign. Voters, in the end, are the only thing that matters. But then Meghan is not the candidate. She is just the candidate's daughter, and she is trying to figure out for herself what that means.