Old Testament-style wrath and the Republican war for Iowa 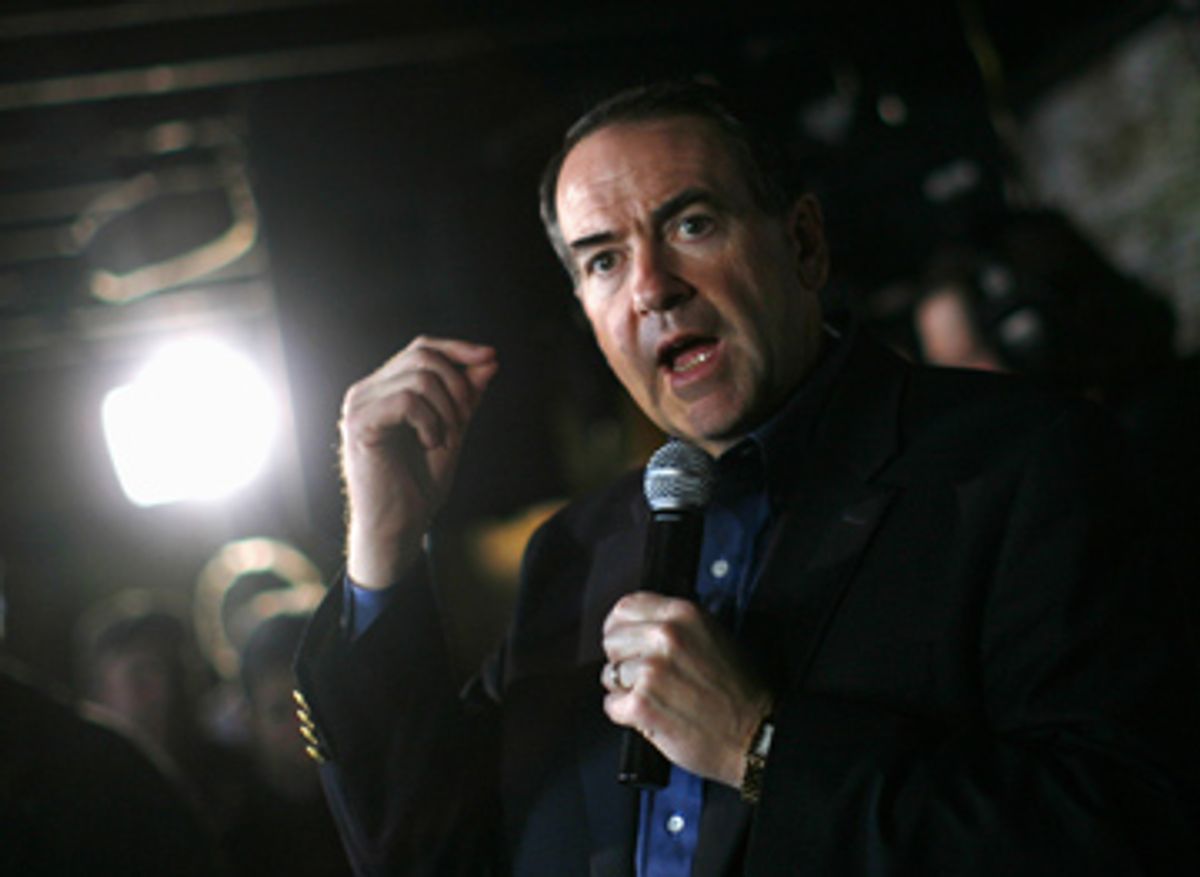 INDIANOLA, Iowa -- In the saga of the Republican campaign for Iowa, put Saturday down as the day the affable, folksy preacher finally mustered up some Old Testament-style wrath.

And finally, he said Romney was lying about his own record. "I didn't just say I was pro-life to get elected," Huckabee told reporters after his speech to voters. Here, he's even quibbling with one of the only nice things Romney says about him (Romney ads say they're both "good men" and "pro-life governors"). "I was consistently pro-life... he's a recent convert to the pro-life position."

Before Huckabee's news conference was even over, spokesman Kevin Madden said Romney had nothing to apologize for. (And no, he and I are not related.) "Mike Huckabee's record is his record and his alone," Madden e-mailed me during Huckabee's presser. "It's a troubling record, but the facts about it are true and the differences many Republicans have with his positions are very real."

In a race where many of Huckabee's supporters say one of the things they like most about him is his refusal to go negative, even in the face of Romney's ads, though, what does this new tactic mean? Just Friday, Romney put two new ads on the air that Huckabee called the last straw. (I will defer to the Boston braintrust and call them "contrast" commercials instead of attack ads, but they have all the hallmarks of a hit piece; when the federally mandated "I approve this message" comes before the ad, instead of after, it's because the candidate doesn't want to take credit for what you've just seen.) The sped-up campaign has gotten so complicated on so many different levels that Huckabee defended McCain, against a Romney ad that zings him over illegal immigration. That's despite the fact that if Huckabee does win Iowa, McCain -- now camped out in New Hampshire -- is hoping to crush him there. "He's now attacked John McCain, he's attacked Rudy Giuliani, he's attacked everybody," Huckabee said. "He's not telling anybody why he should be president, he's only telling everybody why we shouldn't be president."

Of course, it's one thing to call a rival dishonest in front of a room full of reporters, and it's another thing to spend limited resources to do it on television 30 seconds at a time. Huckabee and his campaign manager, Ed Rollins (no stranger to negative campaigning himself), both refused to rule out the prospect of a counterpunching ad against Romney. But they said that wasn't immediately in the works. If Huckabee never directly answers back, that may be mostly a function of crowded airwaves. He says he's got $2 million in the bank, but there's not much he can do with it in Iowa. An extremely unscientific study of Des Moines cable channels since Wednesday makes me think the only air time Huckabee could buy to try to savage Romney would come between the infomercials for the Magic Bullet blender system sometime before dawn. (It can go in the microwave and it's dishwasher- safe.)

More likely, though, Huckabee's trying to have his "comparison" cake and eat it, too. In his own TV spots, Huckabee plays the sympathy card, telling voters, "If you love negative campaigning, you've got to be loving the last few days of this election." At the same time, he gets headlines blaring "Huck Turns Hulk," and blog posts like this one, so the media can carry his anti-Romney message to undecided voters for him. Huckabee aides say they don't know whether Romney's commercials are cutting into the Arkansan's support here, but if Saturday is any guide, they're not taking any chances.