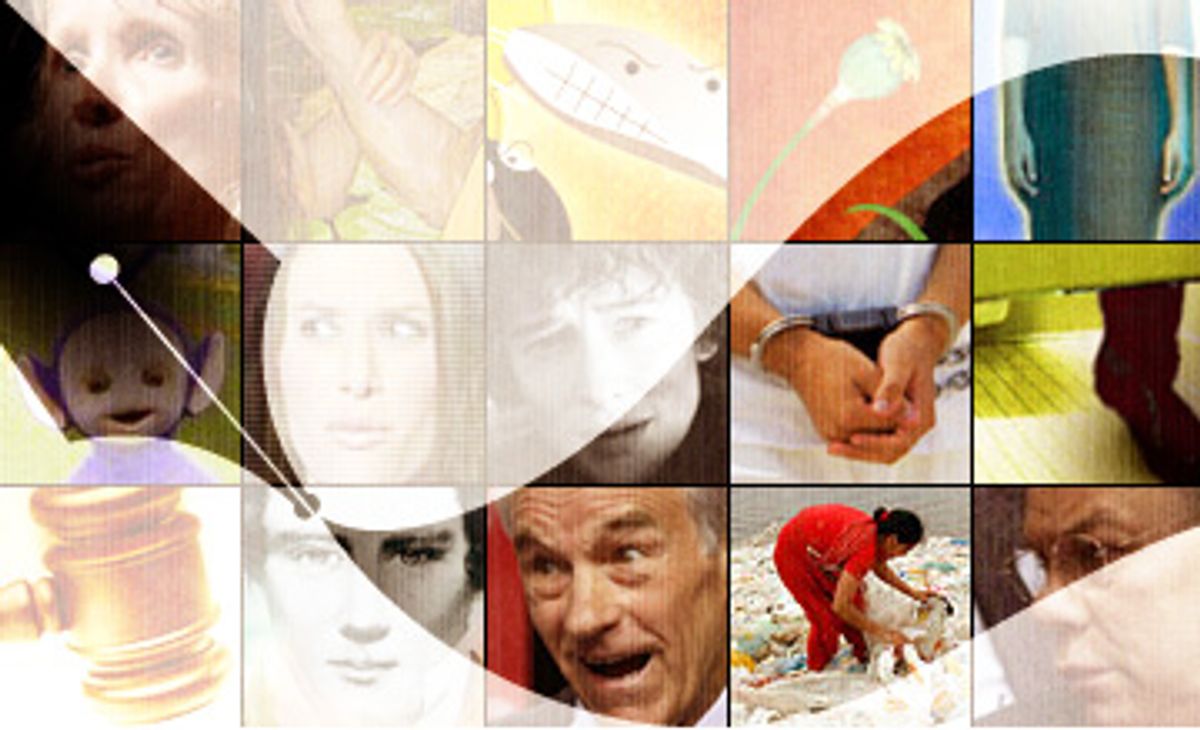 Mission deflated: Our occupation of Iraq has been a losing game for a lot of reasons. Consider one Army unit's effort to hand out hundreds of soccer balls to Iraqi kids.
By Mark Benjamin

The CIA's torture teachers: Psychologists helped the CIA exploit a secret military program to develop brutal interrogation tactics -- likely with the approval of the Bush White House.
By Mark Benjamin

Bjørn Lomborg feels a chill: Global warming doesn't faze the infamous author, who argues that polar bears are doing fine and Al Gore is way too hot under the collar. But can the "skeptical environmentalist" back up his rosy views?
By Kevin Berger

Why bathroom sex is hot: Larry Craig is the latest politician to get caught with his pants down. So what is the eternal allure of sex in a stall, and does it make you gay?
By James Hannaham

I Like to Watch: AMC's "Mad Men" captures the ambivalence of the American dream, while NBC's "Friday Night Lights" fumbles hard.
By Heather Havrilesky

The readers strike back: Massive online feedback has rocked writers and changed journalism forever. This brave new world is filled with beautiful minds and nasty Calibans and everything in between. Its benefits are undeniable. But do they outweigh its insidious effects?
By Gary Kamiya

Tinky Winky says bye-bye to Jerry Falwell: The former TV star recalls the trauma of being called gay by the conservative preacher.
By King Kaufman

At her majesty's pleasure: After a nightmare flight from New York to London, I was thrown into a Victorian hellhole of a prison alongside drug smugglers and rapists. This is my story.
By Peter Kurth

Bush's long history of politicizing justice: It's not only the U.S. attorneys who are threatened by partisan politics. Since Day One, the Bush administration has been quietly dismantling the DOJ's Civil Rights Division.
By Alia Malek

The dark legacy of Carlos Castaneda: The godfather of the New Age led a secretive group of devoted followers in the last decade of his life. His closest "witches" remain missing, and former insiders, offering new details, believe the women took their own lives.
By Robert Marshall

It's easy for soldiers to score heroin in Afghanistan: Simultaneously stressed and bored, U.S. soldiers are turning to the widely available drug for a quick escape.
By Shaun McCanna

Plastic bags are killing us: The most ubiquitous consumer item on Earth, the lowly plastic bag is an environmental scourge like none other, sapping the life out of our oceans and thwarting our attempts to recycle it.
By Katharine Mieszkowski

The fall of man: For ages, impotent men cowered in shame and submitted their penises to terrible remedies. Yet in time, a new cultural history shows, relief would arise for their private misfortunes.
By Laura Miller

The Mormons are coming: Long before Mitt Romney and "Big Love," Mormons were demonized as polygamists, prudes and vampires. But Mormonism just may be the first major world faith since Islam.
By Andrew O'Hehir

Ron Paul is blowing up real good: The rambunctious GOP candidate wants to drag the U.S. out of Iraq, can the war on drugs, and overturn the Patriot Act. No wonder Republican power brokers want to boot him off the stage.
By Michael Scherer

Repeal the Second Amendment: The best way to reduce the odds of another blood bath like the one at Virginia Tech is to amend the Constitution and abolish the right to bear arms.
By Walter Shapiro

Inside the Creation Museum: Adam and Eve frolic amid the dinosaurs in the new $27 million museum that demonstrates Darwin has nothing on the Book of Genesis.
By Gordy Slack

Fox's Ann Coulter 2.0: Conserva-babe and star-in-the-making Rachel Marsden has a, um, colorful past. What was Fox thinking?
By Rebecca Traister

Men who hate women on the Web: And the women (like me) who try to ignore them. Or at least I did -- until the Kathy Sierra affair.
By Joan Walsh

"I'm Not There": This dazzling film explores the idea of Bob Dylan, "poet, prophet, outlaw, fake, star of electricity."
By Stephanie Zacharek