Who thinks a third party candidate like this is a good idea, and why? 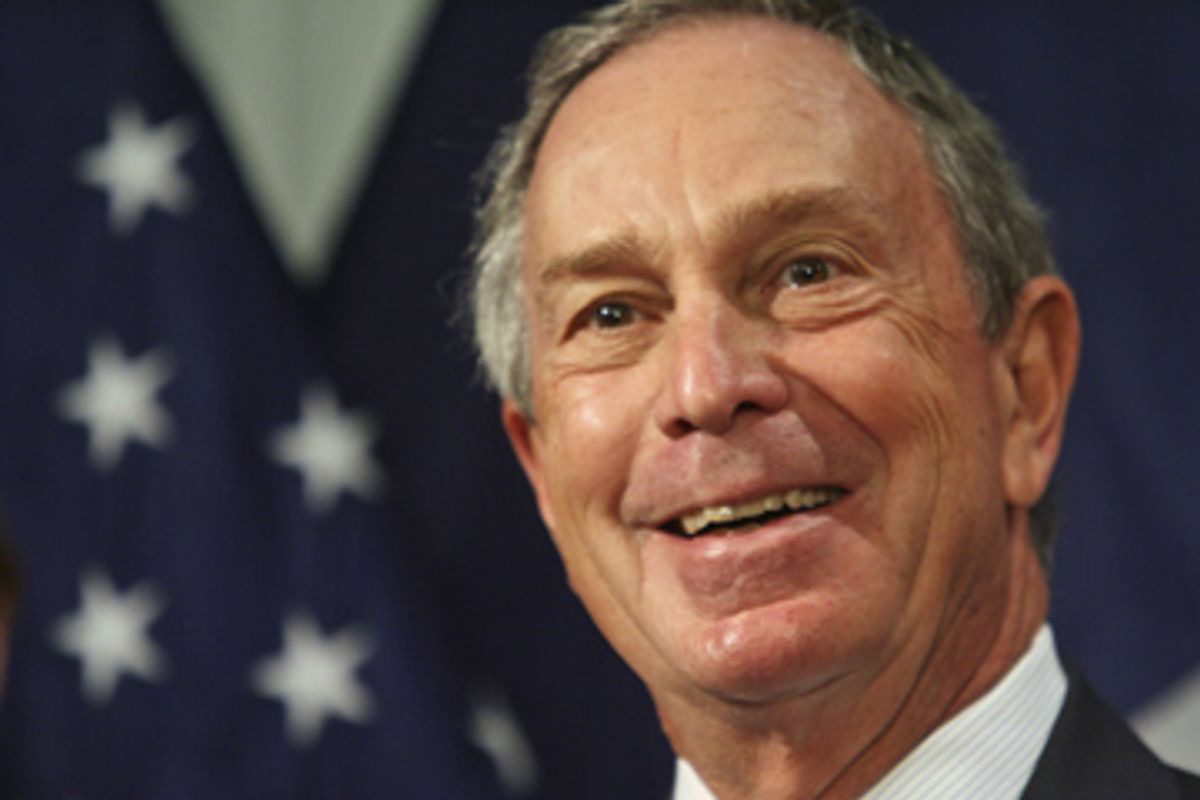 Following along in David Broder's excited footsteps, Sam Roberts in The New York Times reports that Michael Bloomberg "is growing increasingly enchanted with the idea of an independent presidential bid, and his aides are aggressively laying the groundwork for him to run." And a handful of retired, mediocre politicians with no following are issuing self-absorbed, thug-like demands, complete with deadlines:


Former Senator David L. Boren of Oklahoma, who organized the session with former Senator Sam Nunn, a Democrat of Georgia, suggested in an interview that if the prospective major party nominees failed within two months to formally embrace bipartisanship and address the fundamental challenges facing the nation, "I would be among those who would urge Mr. Bloomberg to very seriously consider running for president as an independent."

Is it even theoretically possible for Democrats to "cooperate" more with Republicans than they've been doing since taking over control of Congress?

The NYT article quotes actor Sam Waterston of the painfully silly, substance-free Unity '08 group describing the promise of Bloomberg's candidacy as promoting "Unity08's principal goals of a bipartisan, nonpartisan, postpartisan ticket." The website Unite for Mike -- a grass-roots movement that now has 500 supporters! -- says that Bloomberg "has the vision, experience and passion of a true and demonstrated leader" and that Bloomberg can solve this problem: "Our international leadership has become confused and directionless. We are no longer the shining beacon of freedom and justice to our fellow nations."

Here's Bloomberg's record of Independence, Judgment, Competence, and Trans-partisan Wisdom. Consider how sterling his judgment is and how able he would be to make the world respect us again:


Laura Bush and Mayor Michael R. Bloomberg stood shoulder to shoulder yesterday in an appearance that may well dispel any lingering doubt as to the mayor's feelings about the president, or of the mayor's own political identity. . . .

[T]here he was yesterday, throwing in his words of support for the president's decision to invade Iraq -- promoting one of the notions that is central to the rationale for the attack, that the conflict was justified by what happened on Sept. 11.

"Let me add something to that," Mr. Bloomberg said after Mrs. Bush gave her defense of her husband and his decision to go to war. "Don't forget that the war started not very many blocks from here."


Dating back to his infatuation with Bush, the mayor has always been an enthusiastic supporter of the war in Iraq. He marched lockstep in the Bush drive toward invasion when he addressed the United Nations General Assembly in September 2002: "Freedom comes at a price, and tragically, sometimes that price is the commitment to defend freedom by arms. America has been, is, and always will be willing to do its duty -- to sacrifice even its own blood, so that people everywhere can live as individuals responsible for their own destinies." (As Wayne Barrett once pointed out in the Village Voice, the man spouting this brave talk got out of the Vietnam draft because his feet are flat.)

Bloomberg's pro-war rhetoric dutifully echoed the White House line connecting Saddam Hussein with al-Qaida and 9/11, almost as if Karl Rove had programmed his brain. "I'm voting for George W. Bush and it's mainly because I think we have to strike back at terrorists," he said in September 2004. "To argue that Saddam Hussein wasn't a terrorist is ridiculous. He used mustard gas, or some kind of gas, against his own people."


I want to thank President Bush for supporting New York City and changing the homeland security funding formula and for leading the global war on terrorism.

The president deserves our support.

We are here to support him.

And I am here to support him.


We are going to get George W. Bush re-elected as president of the United States! We are going to carry New York City and New York State. Everybody thinks I'm crazy, but I think we can do it.


Even though the City Council passed a resolution opposing the war, Bloomberg called an old friend, Paul Wolfowitz, to express his desire to host a ticker tape parade "to say thank you," apparently as unaware as the "Mission Accomplished" president that the troops would not be coming home for years. Bloomberg actually contributed $5 million to the Johns Hopkins School of Advanced International Affairs in the late '90s, when war architect Wolfowitz was dean. . . .

Even before the war, Bloomberg brought his mother and daughter to the United Nations, where he addressed the General Assembly a day after Bush did in September 2002. Echoing Bush's warnings that the U.S. would go it alone if the U.N. didn't act, Bloomberg "praised" Bush's war on terror "and offered support for an attack on Iraq," according to the Daily News.

I have said time and again that you cannot negotiate when there is a gun to your head. The international community needs to send a clear message to these terrorist organizations -- and the countries that fund and support their reign of terror -- that these kinds of attacks on peaceful, democratic nations will not be tolerated. . . . .

I commend President Bush and his cabinet for their continued support of Israel and its right to defend itself. I deeply hope that the fighting will end soon, and that all the innocent people affected by this conflict will again be safe. Our thoughts and prayers are with the families of those soldiers who have fallen in combat, the brave sons and daughters of Israel who are defending Israel's freedom at this very moment, and with the people of Israel who are an inspiration to all of us as they continue to go about their lives in the face of such uncertainty.

I have always believed that the fate of Israel and the future of New York City are deeply connected. If Israel's democracy is compromised, so too are our freedoms here at home. A strong Israel means a strong America and a strong New York. And as Americans and New Yorkers, we must continue to stand with Israel as we have done for the past 58 years, and we must never lose our hope for peace.


Bloomberg, in fact, identifies strongly with the defeated Democrat from Connecticut. "I think what they're doing to Joe Lieberman is a disgrace," the mayor volunteered when I met with him in his offices in July, shortly before anti-war bloggers helped Ned Lamont beat Lieberman in the primary. . . . A few days later, Bloomberg was offering to campaign for Lieberman.

He also is as enamored of government control, police powers and surveillance as anyone in the Bush administration. He is an unrestrained advocate and enforcer of the War on Drugs (despite his own acknowledged use of marijuana, of course) and advocates the creation of "a DNA or fingerprint database to track and verify all legal U.S. workers," about which the NY Civil Liberties Union said, with extreme understatement: "It doesn't sound like the free society we think we're living in. It will inevitably be used not just by employers but by law enforcement, government agencies, schools and all over the private sector."

Clearly, this is just exactly what our country desperately needs, what it is missing most -- a neoconservative, combat-avoiding, Bush-supporting, Middle-East-warmonger who sees U.S. and Israeli interests as indistinguishable and inextricably linked, with a fetish for ever-increasing government control and surveillance, and a background as a Wall St. billionaire. We just haven't had enough of those in our political culture. Our political system, more than anything, is missing the influence of people like that. That's why it's broken: not enough of those.

Bloomberg is basically just Rudy Giuliani with a billion or two dollars to spend to alter the election. When it comes to foreign policy, war-making and government power, he offers absolutely nothing that isn't found in destructive abundance among the most extremist precincts in the Republican Party, while his moderate to liberal stance on social issues would prevent him from actually winning the support of his natural GOP base.

In fact -- despite his steadfast neoconservatism -- it's hard to see how the candidacy of a divorced, unmarried, stridently pro-gun-control, pro-choice, socially liberal New York City billionaire would accomplish anything other than offering the Republicans their best hope of winning in 2008. All of this seems to be intended as punishment meted out by the Establishment to the Democrats -- using Bloomberg's billions as the weapon -- for not repudiating their loudmouth, restless liberal base strongly enough. That, more than anything, seems to be the oh-so-noble and trans-partisan purpose of David Broder, David Boren and Sam Nunn: to find a way to stifle the populist anger at our political establishment after 8 years of unrestrained Bush-Cheney devastation, increasingly represented (on the Democratic side) by the Scary, Angry, Intemperate John Edwards campaign.

A Bloomberg candidacy would have no purpose other than satisfy his bottomless personal lust for attention and bestow the wise old men threatening the country with his candidacy with some fleeting sense of rejuvenated relevance and wisdom. His political views are conventional in every way and he's little more than an establishment-enabling figurehead. The whole attraction to his candidacy has nothing to do with any issues or substance and everything to do with an empty addiction to vapid notions of Establishment harmony and a desire to exert control, whereby our Seriousness guardians devote themselves to a candidate for reasons largely unrelated to his policies or political views, thus proving themselves, as usual, to be the exact antithesis of actual seriousness.