How Barack Obama swept to victory in Iowa

In three different Des Moines precincts, a vote-by-vote account of how the Obama wave built. 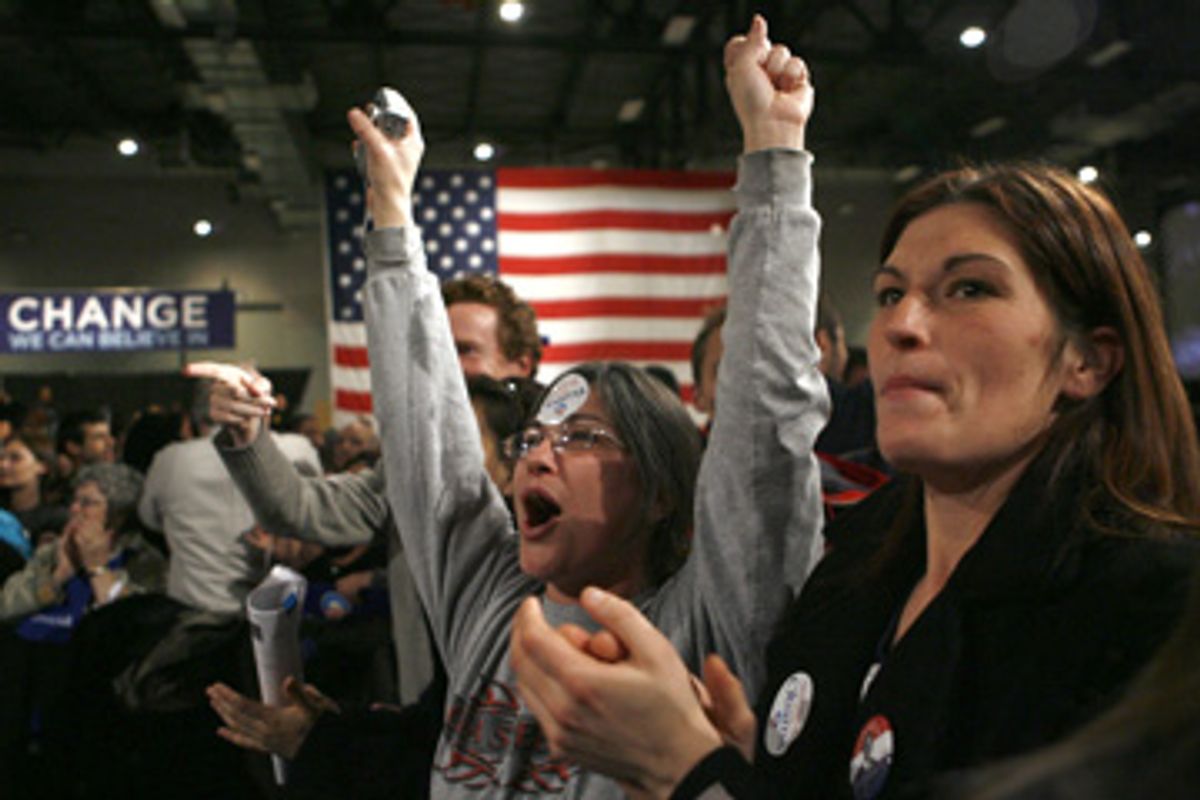 The battle for Precinct 67 was decided in the parking lot. Just the crush of cars filling every parking lot around Central Campus, a high-school academy just west of the city center, signaled that this would be a big night for Barack Obama. As Jeffrey Hunter, the owner of the Hotel Fort Des Moines (yes, he is my temporary landlord), who was caucusing for Obama, said amid the bedlam in the school cafeteria, "I've never seen turnout like this." Democratic turnout here in Iowa Gov. Chet Culver's home precinct wound up more than doubling 2004 levels.

Like shepherds, organizers for each candidate gathered their supporters at cafeteria tables in different sections of the room -- and, even as Democrats were still signing in, the outcome seemed visually obvious. Like islands in a sea, lonely tables for the supporters of Joe Biden, Bill Richardson and Chris Dodd (plus a small knot of Dennis Kucinich backers in the rear of the room) were a visual sign that these candidates would not make the 15 percent threshold to win one of nine delegates awarded here. (With a record 471 caucus-goers in Precinct 67, a candidate needed 71 supporters to be viable.)

Paul Pettinger, a software engineer who had still not made up his mind (he was leaning Edwards) as the initial count neared, pointed to the dozens of Democrats lined up against the side wall as the initial parliamentary maneuvers began. "Most of the people who don't know what they're doing are for Obama -- they're the new voters," he said knowingly. Of course, Pettinger himself last attended a caucus in the 1980s.

Even before the official count began, the Edwards group knew they were in trouble, since they calculated they needed nine more supporters to avoid being shut out in Precinct 67. Mari Culver -- the wife of the governor and John Edwards' leading Iowa supporter -- said determinedly, "We've got to start horse-trading. We've got to go to the Richardson people."

The supporters of the New Mexico governor did not even stay together long as a group, but started wandering the room looking for new political homes. When the first-round numbers were announced, with the governor doing the arithmetic for the caucus chairman, the results were: Obama 245, Hillary Clinton 106, Edwards 75 (they had gotten their delegate), Richardson 26, Biden 18, Dodd 12, Kucinich 5 and uncommitted 4 (including Gov. Culver himself, who had always intended to remain neutral).

Then with the patriotic intensity of a Frank Capra movie in modern dress came the bidding war for the allegiance of 65 Democrats whose candidates were not viable. Anne Fredrickson, the Clinton coordinator in Precinct 67, stood on a chair and shouted to the unaligned voters milling around, "If you want change, then there's no bigger change than putting a woman in the White House." (The feminist ploy failed -- Clinton picked up only three additional supporters). A Dodd backer pleaded with Iowa Attorney General Tom Miller, a major Obama backer and Precinct 67 resident, to throw some extra supporters his way so that Dodd might maneuver to take a delegate away from Clinton. "If you were closer, maybe we could do something," Miller said.

The final round of maneuvering led to a count of Obama 276, Clinton 109 and Edwards 80. Under caucus arithmetic (which is too intricate for mere mortals), Obama received five delegates, Clinton two and Edwards two. Mari Culver's maneuvering had taken her chosen candidate from no delegates to a tie with Clinton in the numbers reported to the state party. As most of the Democrats headed home with the presidential vote over at 8:00, precinct chairman Kim Jones had one final word for the group, "If you think this is total, absolute chaos -- welcome to Iowa."

Gordon Fisher, the former chair of the Iowa Democratic Party, was a perpetual motion machine in Des Moines' Precinct 47 Thursday night, slapping Obama stickers on caucus-goers until he ran out, then slapping on some more. As the lecture hall inside Drake University began to fill up, neighbors greeted neighbors, sharing sandwiches and bottled water across candidate lines, with no tension: It was clearly a big Obama night.

Precinct 47 more than doubled its turnout over 2004, when 160 Democrats caucused. This time around 350 showed up, and 144 went for Obama on the first round. Fisher explained his candidate's appeal in a short, passionate speech, trying to sway supporters of candidates who didn't get 15 percent -- which meant everybody except Hillary Clinton and John Edwards. "I used to be the chair of the Iowa Democratic Party and I like to think I know something about electability," he said, and he pointed to the Obama signs proclaiming "Unity" that lined the walls. "It takes more than Democrats to win an election. Time and time again, Obama has shown an ability to win independents and Republicans."

Kent Sovern echoed Fisher. The communications director of Iowa's Democratic Veterans' Caucus, he supported Hillary Clinton until just a few weeks ago. "As I traveled the state doing veterans work I was hard-pressed to find anyone who was her second choice, and I concluded Barack's more electable. Hillary will hit a ceiling [of support], as unfortunate as that may be."

Precinct 47, mostly northwest of Drake University, features a mix of middle-class professionals, immigrants and African-Americans. Each candidate's supporters were overwhelmingly white, but Obama's were clearly more diverse and young. Weslyn Caldwell, 25, said it was her first caucus -- her father lobbied from Missouri to make sure she participated, and the Obama campaign called her twice a night until she finally committed to caucus for him. The African-American mother of a kindergartener, who works at Principal Financial Group (site of a Mitt Romney event today), says she considered supporting Hillary Clinton, but finally went for Obama. "She thinks she has all the answers; he seems more open to the change we need."

Clinton supporters were downcast, but seemed to expect their candidate's relatively poor showing. (She went from second to third, behind Edwards, when "non-viable" candidates' supporters re-caucused.) "I'm a little disappointed, but I had a hunch," said Craig Martin, a registered independent who became a Democrat to support Clinton. "Obama's campaign has just done a heck of a job; I hardly heard from Hillary."

The other candidates' supporters took the results in stride. Whatever bitterness may exist between the Democrats' campaigns at a national level didn't seem to poison Precinct 47. "The great thing is that they're all great," said Diane Wormson, a Biden supporter. There was little evidence of a rumored Bill Richardson-Obama deal in the Drake lecture hall; the Richardson folks I talked to scattered to Edwards and Obama. Some Biden supporters tried to stick together and lobby Richardson backers to join them as a formally non-committed independent bloc, but that fizzled. Biden supporter Jamie Wormson switched to Edwards, relatively happily. "Obama/Edwards would be a nice message to come out of Iowa tonight," the small-business owner said as he grabbed his coat and headed out into the cold.

A huge crowd gathered at Precinct 15, just north of downtown Des Moines, overflowing almost to the sidewalk of the Grace Lutheran Church as caucus-goers tried to check in before the deadline. The caucus started 45 minutes late due to the turnout. About 110 people caucused here four years ago, and John Edwards won four of the precinct's six delegates.

This year, so many people crowded into the church that it took the caucus chairwoman a few minutes just to figure out how to count them. (At least a third were caucusing for the first time, based on an informal survey as the meeting started.) The total came to 186 -- an increase of nearly 70 percent. Candidates needed support from 28 people to reach the 15 percent needed to win a delegate, or survive to a second round of counting.

The meeting started late enough, and the packed room was hot enough, that chairwoman Tammy Keiter moved almost immediately to the first count. But not before a quick reminder of what this whole process is supposed to lead to in November. "Tonight is a special night for all of us, to be here, being the first in the nation and also to finally end the Bush era," she said. The whole room erupted in cheers.

As the first count rolled along, however, unity mostly went out the windows (open, despite an outside temperature near freezing, to keep the room reasonably comfortable). The process looked more like some elementary school recess activity gone awry than an exercise in democracy. Bill Richardson's group pried Joe Biden supporters in, one by one, until none were left. A white-haired woman in a Tommy Hilfiger sweater walked across the aisle to the Obama crowd, waving a Hillary Clinton sign, and started screaming, "Hillary! Hillary! Hillary!" She had to be pulled away by her friends. Obama's group, in turn, started chanting, "Hope! Hope! Hope! Hope!" as Betty Andrews exhorted them on. "You want hope, step this way! If you believe in change, step this way!"

The director of Iowa's African-American Festival (scheduled for Des Moines in 23 days), Andrews supported Clinton until early December -- and she had a convert's zeal for her new cause. "It's Obama's time," she said. She was an independent until Thursday night, and she was caucusing with a party for the first time. She may switch her registration back by November. "I think it's important to support the person, not the party," she said.

Throughout the count, the negotiating was mostly limited to Biden's surrender to Richardson. Edwards supporters didn't bother trying to talk any Clinton voters their way, and Kucinich's three supporters proudly stuck by him to the end, refusing to switch to Obama unless a second count came up.

By the end of the night, what was a solid Edwards precinct in 2004 had nearly sent half its delegates to Obama. But caucus math made the outcome a de facto tie between the two candidates. Though Obama had support from 72 people, and Edwards only 49, they each wound up with two delegates. Clinton, stuck on 40 people, was left with one delegate. And Richardson slid into viability without any room to spare, winding up with 28 people and one delegate -- thanks entirely to support from people who had come in the door supporting Biden. The two had been dueling for a fourth-place finish statewide when the evening's voting started.