Clinton rocks the vote in the Granite State

With her stunning victory over Barack Obama in New Hampshire, Hillary Clinton disproved the polls and pundits and set up the Democratic race of a lifetime. 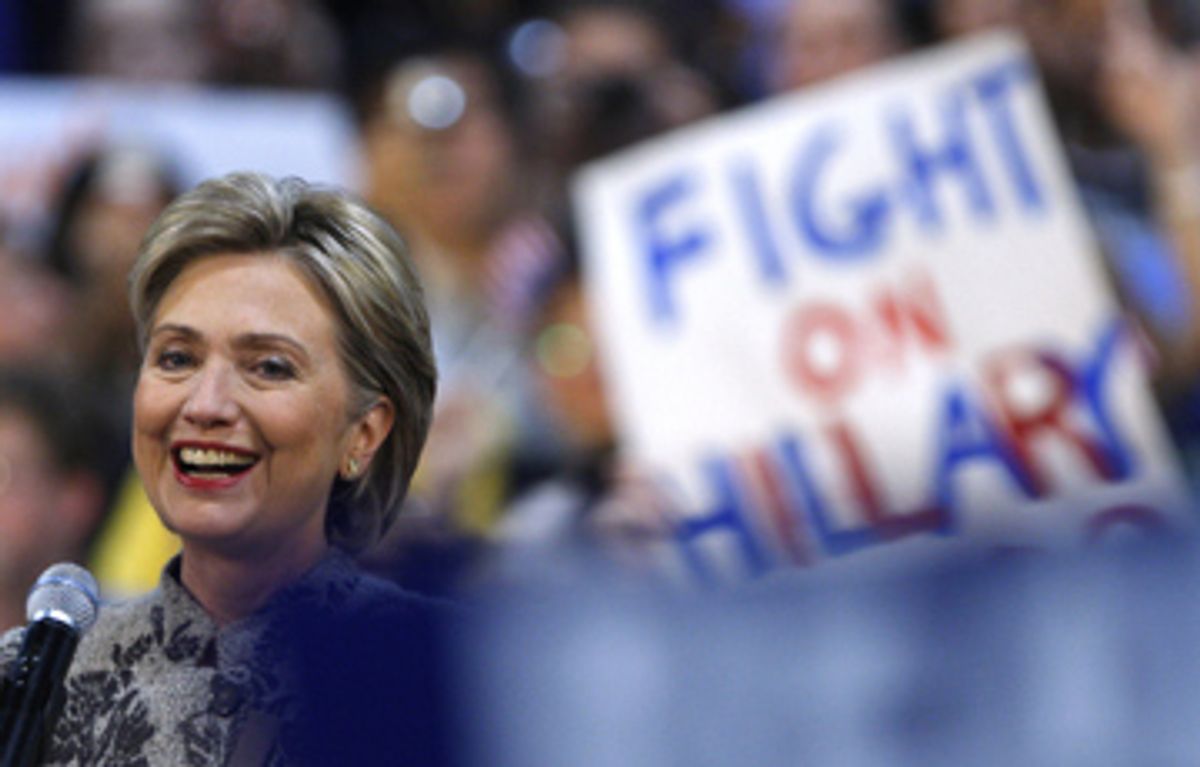 Finally, a Clinton has won the New Hampshire primary. Hillary Clinton's opening words of her snatched-from-the-jaws-of-defeat victory speech Tuesday night touched on the improbability of the wild final days before the primary. "Over the last week, I listened to you -- and, in the process, I found my own voice," she declared in a tone that was more awe-struck than triumphant. "I feel like we all spoke from our hearts and I am so gratified that you responded."

With every public poll predicting that Barack Obama would win here by a comfortable margin, there was gape-jaw amazement virtually everywhere in Campaign Land as Clinton clung to a narrow lead through the evening. The long count on Tuesday night -- with the networks holding off on making a projection until two-thirds of the precincts were in -- was a reminder of the folly of projecting far into the future before a single primary vote was cast. But instead Clinton held a 39 percent to 36 percent lead over Obama at 1 a.m. with 93 percent of the precincts tallied. John Edwards, whose populist rhetoric was always out of sync with this affluent state, was running a weak third with 17 percent.

Not only had the polls and the pundits pointed to a double-digit Obama victory in New Hampshire, but there was growing consensus that the first-term senator would sweep everything through the Feb. 5 Big Kahuna primaries. Many in the Obama camp also fell victim to this irrational exuberance with his victory speech originally planned for 9:30. Instead at that hour, Obama was rewriting his remarks to begin with congratulations to "Sen. Clinton on her hard-fought victory here in New Hampshire."

There were warning signs that Obama's lead in the Granite State might be made of gossamer, but it was easy to ignore them amid the "as goes Iowa, so goes America" frenzy that surrounded the candidate who seemed to personify change and hope. The final CNN/WMUR tracking poll, conducted over the weekend, found that only 53 percent of Democratic voters had "definitely decided" whom to support. Yet the exit polls found that the late deciders broke pretty evenly for Clinton and Obama.

So what happened? Years from now, graduate seminars in political science will be devoted to unraveling this roller-coaster primary. The number that leaps out from the exit polls is that women went for Clinton over Obama by a 46 percent to 34 percent margin. What is impossible to know (yet easy to theorize about) is whether this gender gap was accentuated by the emotional moment Monday when Clinton fought to hold back the tears. The overreaction to this incident by many male pundits (whose views seemed shaped by Ed Muskie's alleged tears before the primary 35 years ago) may have triggered a feminist "you go, girl" counterreaction. But this is just a guess based on anecdotal rather than statistical evidence.

As first glance, the New Hampshire results seem to eerily mirror the 2000 Democratic primary when Al Gore carried the cities and middle-income voters, while insurgent Bill Bradley was the champion of the affluent, the picture-postcard small towns and the student vote. This time Barack played Bradley to Hillary's Gore. The exit polls showed Clinton winning with voters whose household income was under $50,000, while Obama carried most upscale and younger voters. (Edwards did not get more than 20 percent support from any demographic group.) In similar fashion, Clinton whomped Obama by a 48-to-30 margin with voters who did not attend college.

The New Hampshire results will hang over the Democratic race for 18 long days until the Jan. 26 South Carolina primary. (The Jan. 19 Nevada caucuses will have a less predictable effect on expectations.) The Clinton campaign is in the process of revamping itself on the run by bringing in Hillary's former White House chief of staff Maggie Williams and former Bill Clinton political director Doug Sosnik at the upper levels of the seemingly sputtering campaign. Now suddenly, it is the Obama bandwagon that may be misfiring, although no one is talking about staff shake-ups back in Chicago.

The problem for Obama may be that -- for all his eloquence and for all the hopes that rest on his shoulders -- he still cannot close the deal with a majority of Democratic voters. Among the most intriguing statistics in the exit polls was that Clinton narrowly beat Obama, totally contrary to expectations, among voters who "strongly favor" their candidate. You read that right: Hillary Clinton, the reputed status-quo candidate, has the most passionate supporters. Obama, whose crowds were near-unprecedented in New Hampshire primary history, somehow led among voters who had "reservations" about the candidate they supported.

Exit polls are notoriously blunt instruments since the questionnaires have to be short to accommodate voters being interviewed on the run. And despite the allure of hard data (the sentiments of people who have actually voted for president), there is a danger in over-analyzing these still limited samples.

In his lilting speech Tuesday night to his disappointed supporters, Obama declared, "You made it clear that at this moment -- in this election -- something is happening in America." What New Hampshire made clear is that we will have the next month to decipher what is happening in America as Obama and Clinton -- the first African-American and the first woman to come this close to the White House -- battle each other until at least Feb. 5. There will be no coronation (especially with Edwards still on the fringes), no parade of inevitability, no rush to judgment. Instead, after the jolt from New Hampshire voters, we may be in for the most fascinating Democratic race in memory.