A resurgent John McCain claims victory in the state he won eight years ago. Now on to South Carolina, where they play rough. 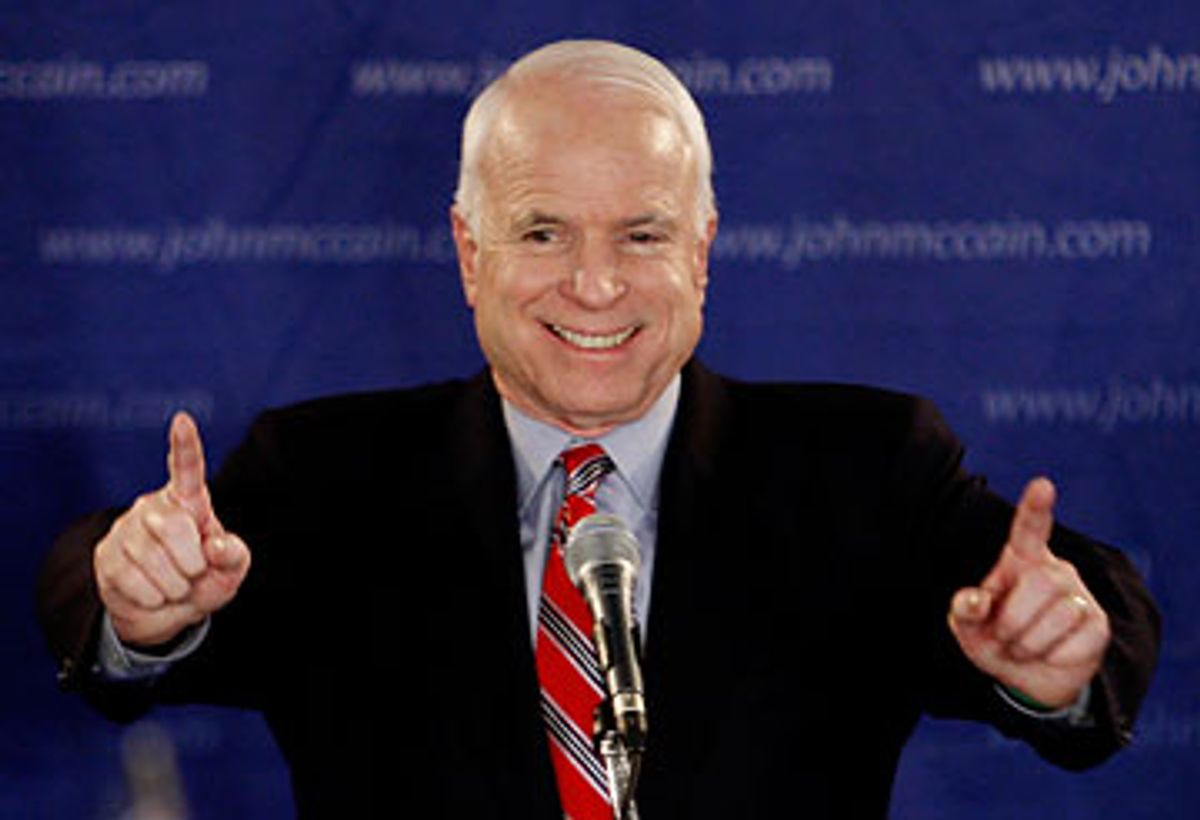 The theme from "Rocky" blared as John McCain walked into a roiling ballroom full of supporters Tuesday night. Just in case anyone didn't get the message, McCain opened his victory speech with a crack about being too old to be a kid, "but tonight, we sure showed them what a comeback looks like." He rolls out of New Hampshire once again the GOP front-runner -- and what a way to get there.

By sending Mitt Romney to his second defeat since last Thursday, McCain completed a resurrection that might impress even Mike Huckabee's supporters. A year ago, McCain was trying to lock down the establishment early and make himself the inevitable nominee. 2008 turns out not to be the year for inevitability. McCain's campaign fell apart last summer, leaving him nearly broke and languishing in the polls. Without much choice, he gambled his political future on New Hampshire. And when the basic weaknesses of the GOP field left him an opening, he seized it.

With stronger rivals, the gambit might never have worked. The differences McCain has with much of the Republican base didn't vanish. He still gets questions from voters about his immigration reform plans and his campaign finance reform law, and he hasn't lost his apparent inability to walk into a gathering of his fellow Republicans without finding a way to annoy them. Yet Romney didn't settle on a message that fit him until after he'd lost Iowa, and the compressed calendar didn't leave him enough time to put it to much use. Rudy Giuliani abandoned Iowa and New Hampshire for (maybe) sunnier Florida. Huckabee's aides still don't quite know how to run a national campaign. Conservatives were still wishing Fred Thompson would get into the race even after he did.

Almost by default, that left McCain. He stuck to the "straight talk" that won him the state eight years ago, railing against federal spending and exhorting supporters to join "a cause greater than yourself." But the war in Iraq and the 9/11 attacks added an extra focus on national security to the Republican race in particular. McCain used his defense credentials to push back against Romney's criticism on taxes and immigration, implying Romney wouldn't know how to keep the country safe, and McCain boasted of supporting the surge in Iraq even when it wasn't popular. Unlike eight years ago, exit polls showed McCain winning among Republicans and independents alike. He beat Romney among voters whose main criterion was "most electable" and even among those who said their biggest issue was the economy.

In his victory speech, John McCain reminded all listening that he is, in fact, a Republican. Reading from a prepared text, McCain said he wanted to restore America's faith in government -- and in the Republican Party. "In recent years, we have lost the trust of the people, who share our principles, but doubt our own allegiance to them," he said. "I seek the nomination of our party to restore that trust; to return our party to the principles that have never failed Americans: The party of fiscal discipline, low taxes; enduring values; a strong and capable defense." But his bid for national unity -- and the support of independent voters -- may suffer if he makes supporting the Iraq war its keystone. "As we confront this enemy, the people privileged to serve in public office should not evade our mutual responsibility to defeat them because we are more concerned with personal or partisan ambition," he said. "Whatever the differences between us, so much more should unite us."

His closest advisors felt this victory coming for days, maybe since before Iowa. Strategists who took the blame for his woes last summer were looking forward to watching pundits eat their words. In McCain's hotel suite Tuesday night, allies and advisors were reportedly so raucous that the candidate had to retreat to the bathroom to take congratulatory phone calls from Romney and Huckabee. But even so, members of the McCain team didn't always seem to quite believe what was happening. Senior advisor Mark Salter all but walked away from any conversations this weekend that dared to look past New Hampshire. Admaker Mark McKinnon managed to sound both dumbfounded and certain at the same time when he predicted Republican donors and establishment types would come on board with a win here.

After a brutal battle against Romney, aides were amazed at how quickly the networks called it for McCain. His supporters, however, weren't. The room was already buzzing before Fox News projected their man as the winner, and when the news came, the crowd erupted. "Mac is back!" is a relatively new rallying cry for McCain supporters, but it caught on quickly, and swept through the ballroom at odd intervals even after McCain's speech was long over.

Romney's party was a glummer affair, even before the official word of his defeat. The savior of the Salt Lake City Olympics went back to the sports language that he seemed to find some comfort in last week. "Two silvers and a gold," Romney told supporters. The gold came in Wyoming's mostly uncontested caucus on Saturday. He avoided the awkward baseball metaphor he stumbled through after Iowa ("it's a 50-inning ball game"), but supporters got bright red Romney Thundersticks and foam catcher's mitts (get it?) as they walked in anyway. Before the polls even closed, the cash bar was doing a brisk business, but not because drinkers expected a happy end to the night.

Aides said Romney was still well poised to sweep through later states. "If you look at the calendar, we go all the way through Feb. 5," said spokesman Kevin Madden. "These are two states and two strong finishes in the top two. It's a measure of strength that we've done that well in these early primary states." The only problem? Madden was already spinning Romney's loss hours before the polls closed. When he addressed supporters, Romney promised he'd keep going, and he hit the cheeriest parts of his cheery stump speech while conceding. "I believe it's time to send somebody to Washington who will actually get the job done," he said. "I will fight across this nation, on to Michigan and South Carolina and Florida and states after that."

Michigan, where Romney's father, George, was once governor, votes next Tuesday. Still, it's Huckabee, not Romney, whom the McCain team sees as the biggest obstacle to continuing his momentum. McCain's advisors expect the New Hampshire win to carry them through Michigan, as well.

But South Carolina, where Republicans vote in 10 days, is another story. Evangelicals, whom McCain worked hard to woo, comprise around half of the GOP primary vote, and they may not choose McCain when they have a chance to vote for an ordained Baptist minister instead. And while Huckabee and McCain like each other and won't use negative tactics to prevail, it's hard to predict what kind of dirt might get thrown around in the Palmetto State. McKinnon -- who worked for George Bush eight years ago as the South Carolina establishment clawed McCain into submission -- said he was shocked by what he saw then. "They do that sort of stuff for fun down there," he said. "The dogs come off the chains." If McCain's remarkable comeback is going to continue, he may have to find a way to survive the same treatment this time.