In this interview and podcast, the director of the terrifying documentary "Taxi to the Dark Side" talks about torture and the tragic fate of an Afghan cabdriver. 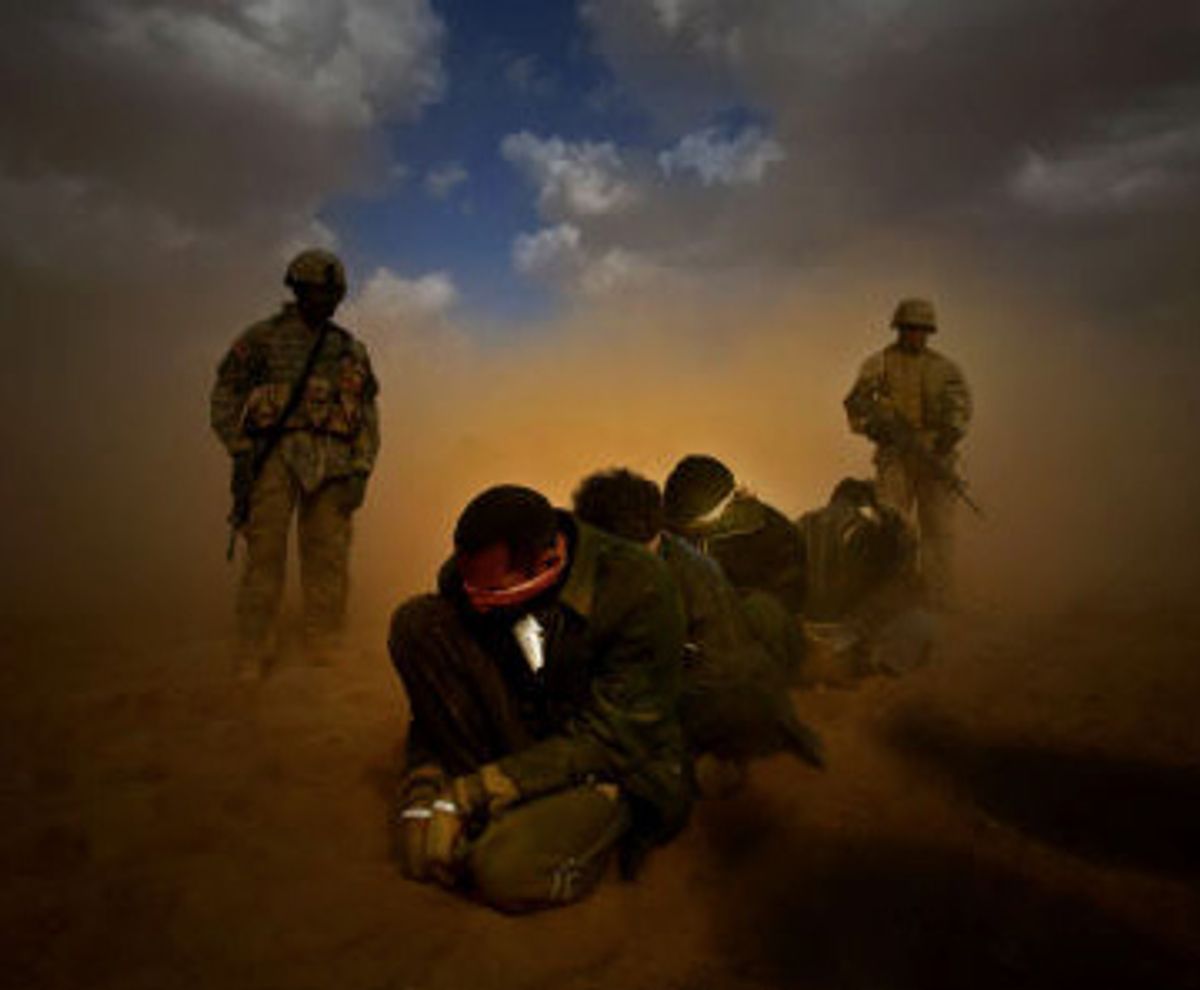 To listen to a podcast of the interview with Alex Gibney, click here.

When I first saw Alex Gibney's terrifying documentary "Taxi to the Dark Side" last year at the Tribeca Film Festival, an audience member after the premiere screening asked Gibney what he hoped the film's effect would be. "I hope it provokes some rage," he said.

The question whether Americans can ever be adequately enraged by the Bush administration's document-shredder approach to the U.S. Constitution -- and its abandonment of all conception of human rights and human decency -- remains to be answered. But "Taxi to the Dark Side" is a pretty good start. The film's evocative title refers to the fate of an Afghan taxi driver named Dilawar, whom Gibney believes was the first person murdered while in U.S. custody during the "war on terror" (but definitely not the last) and also to Vice President Dick Cheney's infamous remark that in order to combat evildoers "we have to work the dark side."

With the same combination of cinematic zeal and intense research that he brought to "Enron: The Smartest Guys in the Room" (in this case, largely drawn from Carlotta Gall and Tim Golden's New York Times reporting), Gibney here approaches an even bigger question than the depredations of corporate capitalism: Since we're already too late to stop the United States from becoming a country that detains, tortures and kills perceived enemies in secrecy, how can we begin to undo the damage?

While the focus of "Taxi to the Dark Side" is the mistreatment, and worse, of prisoners at places like Abu Ghraib in Iraq and Bagram Air Force Base in Afghanistan (where Dilawar died), Gibney's central point is that the abuses were too widespread and systematic to be blamed on a few overeager or underqualified military police. They resulted instead from a concerted effort to claim new and permanent powers for the U.S. presidency, and to condition Americans to the idea that the limits of decent conduct were now to be ignored.

I interviewed Gibney last spring, not long after his Tribeca premiere. (Since the interview, he has completed work on "Gonzo: The Life and Work of Dr. Hunter S. Thompson," which premieres this month at Sundance.) "Taxi to the Dark Side" is in theaters beginning Jan. 18. (Listen to a podcast of the full interview here.)

"Taxi to the Dark Side" is devastating. Can you break down what this film covers?

It starts off as a kind of murder mystery in a way. A young Afghan taxicab driver is killed at the Bagram Air Force Base in Afghanistan ... a detention center for all sorts of people who were captured right after the invasion of Afghanistan and right on to today, throughout Afghanistan and sometimes in Pakistan ... kind of a clearinghouse and interrogation center. And this guy, this taxi driver, was picked up near the Pakistan border and brought to Bagram. Within five days of his arrival there, he was dead. The Army initially concluded that he died of natural causes. An enterprising New York Times reporter named Carlotta Gall went up to the village where his parents lived, and they actually had the death certificate; they couldn't read it because it was in English. She read it, and at the bottom under "Cause of Death" was [a box marked] "Homicide," and that was the one that was checked. After that, investigations began, but it took a long time to unravel the story. In the film, the story uses that as a starting point to investigate this whole network of detention and interrogation that the Bush administration has put in place, with all the allegations of torture, violations of Geneva Conventions, undermining of habeas corpus and, I would submit, ultimately, the rule of law. It ends up being a film about corruption -- how this new system of detention and interrogation corrupts us all.

I think for people who've been tracking this issue through the New York Times reporters you're talking about, the Washington Post and Salon, to some extent, a good deal of this is already known, but your film patches the pieces together in a really compelling way. What do you have in the film that's essentially new reporting?

Some of the new reporting involves materials that have never been seen before. Nobody had seen the images from inside Bagram prison, for example. There's some other videotape of the highest-ranking JAG officer in Afghanistan, who more or less admits that some of these practices, which led to this guy Dilawar's murder, were common and, indeed, approved techniques. There are some Abu Ghraib images that have never been seen in a film before, and we have discussions with some of the guards and interrogators from Bagram that nobody's seen before. So it's this focus on Bagram that's new. Bagram, of course, precedes Abu Ghraib by some great distance. Indeed the unit in charge of the interrogation of Dilawar is sent to Abu Ghraib not very long after Dilawar's death and they're in charge there.

And you're right. The contribution this film makes is to try to put the pieces together and to use this story of the Afghan cabdriver as a way of looking at the system, but to do so in way that you get some real texture and feeling for what it was like on the front lines for these guards and interrogators and how that intersects with what the policy makers were doing up at the top. We have some important interviews with some key people who were inside the administration and tried to stop this policy.

Alberto Mora is one, the former general counsel of the Navy. Lawrence Wilkerson, the former chief of staff to Colin Powell.

The question that's been hovering over this entire period, from Bagram to Abu Ghraib to Guantánamo, is: Where were these policies set, and who set them? You don't exactly make the case that it's a clear-cut situation where Donald Rumsfeld wrote a secret memo that said "Torture prisoners," and that's what happened. It's cloudier than that.

It is cloudier. And that's part of the problem. There are some documents that are being sought even now by the Senate Judiciary Committee and the Senate Armed Services Committee that have never come to light. Notably, allegedly, the document that gives the CIA authorization to waterboard people, for example. Some of the documents have come to light, for example, the torture memo, which we refer to in the film, [which] redefines torture [as] only that which intentionally leads to organ failure or death ... Well, that's a pretty broad definition.

So, for instance, pulling out your fingernails isn't torture under that definition, since it isn't going to kill you.

It doesn't lead to organ failure, and if you're not intentionally trying to cause organ failure, you can pull out someone's fingernails and that would be OK. The metaphor that I like the most is a virus. The Bush administration, notably the office of Dick Cheney, David Addington ... and the office of the White House general counsel Alberto Gonzales ... it's like they let a virus loose in the system and the virus mutates and migrates. You can't say that there's always an order that goes down and that's why these things happen.

One of the most telling things in the film is, there is clearly a memo that is sent by Donald Rumsfeld exclusively for the interrogation of Mohammed al-Katani, who was alleged to have been the 20th hijacker, and there's some very clear guidelines laid down that authorize new interrogation techniques that clearly would never be allowed under the Geneva Conventions. These, I would argue, as Alberto Mora argues, are clearly torture. But it's only authorized for one particular person. What happens is, the people at Bagram who are getting tremendous pressure to get good intelligence, they hear that their pals over at Guantánamo have these new guidelines and they're thinking, "Wow, we could really use those over here." And so they start using them. They're not authorized to [use them], but they start. I think it gives you some sense of how the process works: Tremendous pressure comes down from on high, and also the wink and the nod. The message is, the gloves are off.