The directors of "Half Nelson" return with a moving, elegant baseball odyssey. Plus: Mississippi minimalism, suddenly hot. 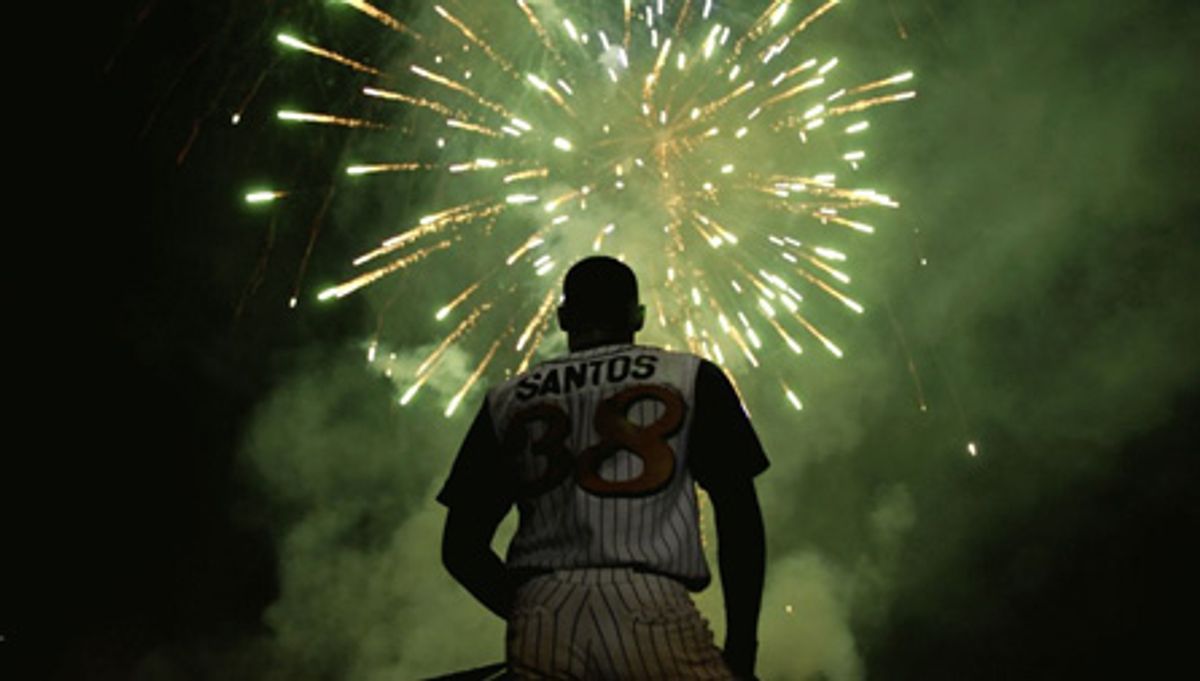 PARK CITY, Utah -- Following up a big success is a difficult task for any artist, sometimes a stranger and riskier one than achieving success in the first place. Already at Sundance this year, we've seen the premiere of Alan Ball's "Towelhead," his first venture since wrapping up "Six Feet Under," one of the most beloved and acclaimed TV series in the medium's history. On Monday evening, Park City hosted the unveiling of "Sugar," the new film from the "Half Nelson" writing-directing team of Anna Boden and Ryan Fleck.

I responded to "Towelhead" as a noble disappointment and "Sugar" as a rich and moving surprise, but let's give these filmmakers credit, first of all, for venturing into new terrain. It really helps, in both cases, if you put the previous works out of your head as much as possible. Ball leaves the urbane, middle-class L.A. of "Six Feet Under" behind for newly sprouted suburbia, circa 1991, while Boden and Fleck abandon the Marxian-Brechtian Brooklyn drama of "Half Nelson" for, believe it or not, the Dominican Republic and the baseball diamond.

Yeah, "Sugar" is a baseball film. It's definitely got elements of social and political subtext, especially as it captures the strange world of the Dominican "baseball academies," where that nation's raw talent is nurtured for North American harvest in a sort of plantation system controlled by Major League Baseball teams. But more than anything else it's a story of one young man's maturation and transformation, as 20-year-old pitcher Miguel "Sugar" Santos (Algenis Pérez Soto) moves from the Dominican Republic to spring training in Arizona, minor-league stardom in Iowa and onward toward an ambiguous destiny. And it's got an awful lot of baseball in it.

Let's marvel a moment longer at the fact that "Sugar" has no name actors whatsoever -- although Pérez, himself a former ballplayer with soulful eyes and a brilliant smile, could be a movie star in waiting -- and maybe 65 to 70 percent of the dialogue is in Spanish. It's also a straightforward, traditionally constructed character drama shot in bright colors, with none of the frame-breaking or Greek-chorus effect or whatever you want to call Boden and Fleck's technique in "Half Nelson." Essentially, "Sugar" follows Miguel's career trajectory forward from the moment he masters the "knuckle curve," an almost unhittable pitch that renders him, at least temporarily, a hot property in the Kansas City Knights' farm system. (Other big-league teams are referred to by their real names, but Sugar's franchise, the Knights, are fictional.)

At first, Sugar is just one of the guys at the Knights' academy in Boca Chica, where young prospects live in dorm barracks under a 10 p.m. curfew, spending every waking moment playing baseball, working out or consuming enormous quantities of cafeteria food. (Oh, there's also English class: "I got it!" "Ground ball!" "Line drive!" "Home run!" And then a chorus of "Take Me Out to the Ballgame.") But when a visiting American instructor shows him the knuckle curve -- one of the most dazzling and difficult pitches in a hurler's arsenal -- Miguel begins to look like a hot property.

Along with showing us a world even most baseball fans know nothing about, Boden and Fleck capture Miguel's prodigious loneliness as he travels to the Knights' spring-training camp in Phoenix, where older Latino players show him the ropes: No hotel-room porn, no drinking beer from the minibar. It takes him numerous visits to Denny's before he can summon up enough English to order something besides "Fren toast." When Miguel is assigned to the Knights' class-A franchise in Bridgetown, Iowa, he lives on a farm outside of town with an older couple whose principal passions in life are the Presbyterian Church and the Bridgetown Swing, Sugar's new team. He pines for the Higginses' wholesome Christian-teen granddaughter, who likes him back, but the distance between them is more than a matter of race or language or religion.

Pérez has to carry an immense amount of this movie on his muscular shoulders, and must convey to us with very few words and almost no overt emotional display that Miguel is searching for something that baseball can't give him. For a few weeks Miguel is the star of Bridgetown's starting rotation, but after he injures his foot and has trouble reestablishing control of his pitches, his Dominican dream of Yankee Stadium stardom and lifting his whole family out of poverty begins tangibly to slip away.

Sugar's story takes some unexpected shifts in the last third of the film, but what's wonderful about Boden and Fleck's movie is that it never tries to psychoanalyze its protagonist, never inserts a helpful voice-over or an Anglo girlfriend to explain everything. Sugar's journey and destination just make sense, and if the hero of this tender and lovingly constructed film is a dignified young man who holds himself at a distance from us, we'll respect him all the more for it in the morning.

"Sugar" probably won't find the audience "Half Nelson" did, although the packed house at the Park City Racquet Club seemed fully absorbed. And it certainly lacks that film's indie-hipster cachet. It was produced by HBO, and may receive only a limited theatrical release before moving to the small screen. Those aren't bad things. To me, they indicate that Boden and Fleck are filmmakers who insist on hewing their own path, without chasing last year's audience or becoming imprisoned by subject matter and style.

If "Sugar" is one clear standout in what looks like a weak and uneven year for narrative features at Sundance, Lance Hammer's debut "Ballast" is the true critic's darling, a work of minimalist technique and emotional generosity. Shot on 35 mm film using only available light, "Ballast" is a profoundly American film that's nonetheless rooted in the European tradition of improvised, lo-fi naturalism (as in, say, the work of Belgium's Dardenne brothers). Hammer's southern Mississippi landscapes are wide, flat, wet and strewn with trash; his people seem as if they might be swallowed up at any moment.

"Ballast" is built on an uneasy human triangle: There's bad blood between Lawrence (Micheal J. Smith Sr.) and Marlee (Tarra Riggs), who used to be his late brother's girlfriend. Lawrence is paralyzed by grief and depression, and Marlee is almost consumed by anger, but they keep being drawn together by a shared desire to help Marlee's 12-year-old son, James (JimMyron Ross), who's in danger from small-town thugs and has begun smoking crack. (James' mode of reaching out to his uncle is coming over with a gun to rob him occasionally.) There's plenty of dramatic incident in "Ballast," including a couple of shootings and Marlee's attempt to resurrect the defunct family store, and the acting of Hammer's nonprofessional cast is impressive. But audiences primarily in search of plot will be frustrated, because the central experience of the film is visual and emotional. Violence and tenderness alike are dwarfed by cinematographer Lol Crawley's wintry wide-screen landscapes, and the film's adults will have to join forces to prevent James from disappearing into them.