Giuliani's rope-a-dope strategy in Florida has included obsessive security and plenty of pandering. But it looks like lights out for his presidential bid. 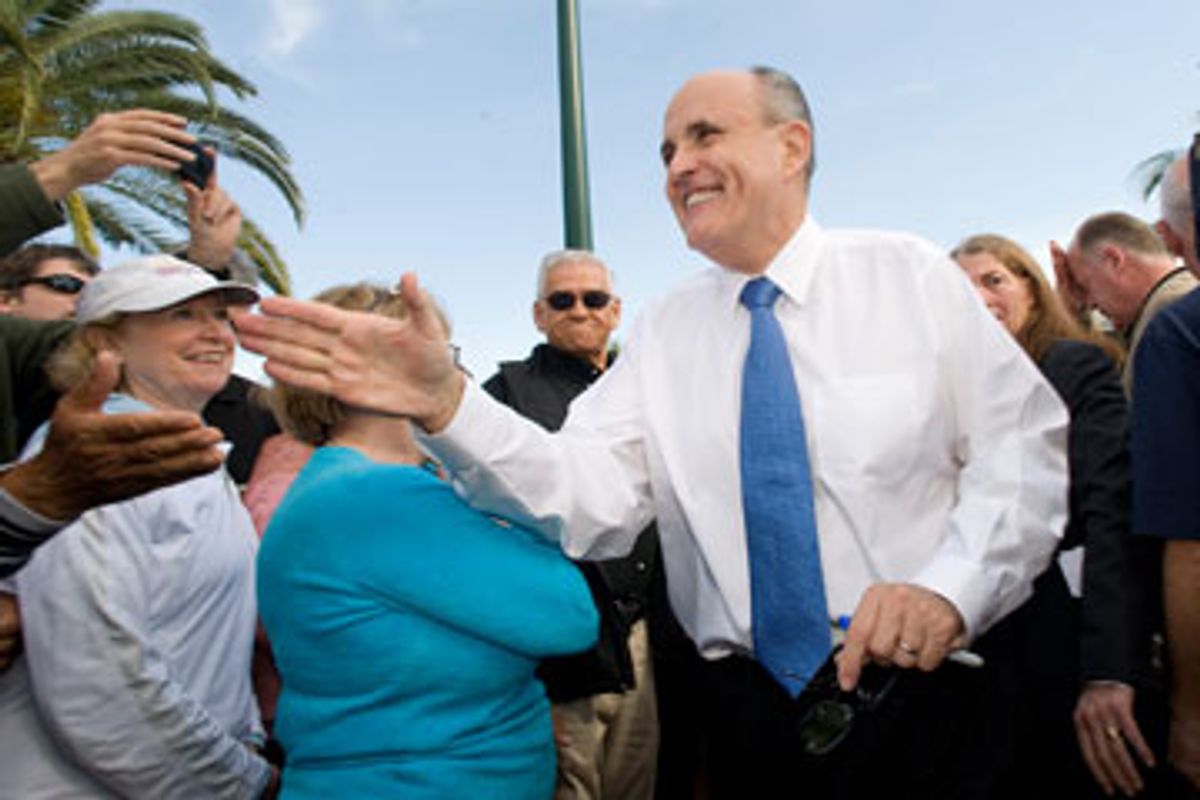 For a native New Yorker, it's a familiar story: You work hard your whole life, day in, day out. But when the grind and the cold weather finally get to you, you park yourself in sunny Florida and retire. The weather is nice, the taxes are low, and there are plenty of other Northerners around to keep you company.

Of course, that wasn't quite the narrative Rudy Giuliani had in mind when he relocated his presidential campaign from midtown Manhattan to Winter Park, Fla. The leap to an Orlando suburb was supposed to be the crucial step in the former New York mayor's triumphant path to the White House. While his rivals punched each other out in states where Giuliani's pro-choice, gay-loving GOP heresies wouldn't fly with the base, he'd find refuge here, win the primary and cruise through Feb. 5 -- then, ideally, crush Hillary Clinton in an all-New York general election rematch of the Senate campaign he aborted eight years ago.

Instead, Giuliani looks likely to join thousands of other New York natives for whom Florida is the end of the line careerwise, at least as far as his 2008 White House bid goes. The race is neck and neck here, but it's John McCain and Mitt Romney dueling for victory. Polls show that Giuliani is in danger of falling to fourth, a cataclysmic slide for a candidate who led the state by 5 points less than a month ago and by more than 20 points in November. With the economy dominating the headlines and playing to Romney's strengths, and McCain gobbling up all the ink on national security, "America's Mayor" barely even has a chance to talk about 9/11 anymore.

"This is going to go down as a tragic farce of a decision," pollster Tom Eldon said of Giuliani's big bet on Florida. Eldon's survey for the St. Petersburg Times and Miami Herald last week showed Giuliani with little hope of pulling into second place, much less first.

To everyone but his own advisors, Giuliani's rope-a-dope strategy seems, predictably, to have left him seriously wobbling. He has finished no better than fourth -- and more often, sixth -- in elections in Iowa, Wyoming, New Hampshire, Michigan, Nevada, South Carolina and Louisiana. At some point, even if you're not trying to win, losing so often makes you seem like, well, a loser. "He didn't have to win those states, but he didn't have to go completely dark," said one influential Florida Republican, who remains neutral in the race, but didn't want to be quoted by name criticizing Giuliani's strategy. "For somebody who's not a political junkie, who doesn't watch things closely, he's probably being viewed as an also-ran," admitted Greg Madonna, an airline pilot from Weston, Fla., who's the co-chairman of Giuliani's campaign in southern Broward County.

Giuliani and his aides say Florida's early voting laws -- which mean some supporters may have banked votes for him before his fall -- will help him surprise people. "If he wins this thing on Tuesday, people are going to be upended," said Bill Paxon, a former New York House member who has been one of Giuliani's staunchest supporters.

But Giuliani backed himself into a corner making his last stand in an expensive state against better-funded opponents -- especially Romney, who can easily afford to put himself on television in all of the state's media markets. It never made much sense, Eldon said, for Giuliani to plan for a showdown against a billionaire in a big primary state like Florida.

Giuliani has not given up. After making a career in New York as a pugnacious, larger-than-life mayor who never backed away from a fight, Giuliani is presenting himself here as the calm middle ground between the sparring McCain and Romney. "What we should be talking about is not negative criticism of each other, what we should be talking about is what we can accomplish for the people of Florida and the United States," he told reporters Sunday. For Giuliani, that includes a tax cut he says would be the biggest in history (and would replace all tax forms with a one-page sheet); an increase in the size of the military; and, especially for Florida, federal funds to help insure homeowners who risk losing everything in a hurricane. Naturally, being Rudy Giuliani, he also says his plan would help insure people against inevitable terrorist attacks.

He has practically made an art of pandering across the Sunshine State. And it hasn't been limited to discussion of radical jihadists, hijacked airplanes and collapsing buildings. On Calle Ocho Friday morning -- the fiercely anti-Castro heart of Miami's Little Havana -- he used his stump speech to reduce his mayoral career essentially to two moments. Speaking to a community center full of senior citizens (where he shared the stage with a troupe of geriatric salsa dancers), he said, "When I was mayor of New York, I made certain that Fidel Castro was not invited to the U.N. 50 celebration, to make clear what I think of him." Never mind that Castro still came to New York and got a hero's welcome in Harlem; the line got more applause than anything else he said (especially once it was translated more concisely into Spanish). He also took credit for a bold stroke of international diplomacy, when he named the street that the Cuban U.N. mission sits on "Brothers to the Rescue Corner," after Cuba shot down a plane flown by the Miami-based exile group.

Moving along to Miami's Latin Builders Association later on Friday, he joked about how much better his wife Judith's Spanish is than his. ("You probably should have her up here doing the speech, she could probably do it both ways.") But then, in stops in Sarasota on Friday and Orlando on Saturday, he went for the surefire applause a GOP crowd gives to anyone promising to crack down on illegal immigration. At a Boca Raton synagogue Sunday, he talked up Israel as a prime example of a country with tight border control, in an otherwise standard stump speech that he delivered wearing a yarmulke.

His events still drew big crowds, although in a state as large as Florida that's not necessarily an indicator of strong support. From stop to stop, the atmosphere often felt flat when he spoke; there was none of the electricity of a campaign that's going places. The only heat at all seemed to come when Giuliani mentioned New York. "One of the things that I love about Florida is every place I go, I meet New Yorkers," he said in Miami on Friday. "Sometimes I think there are more New Yorkers in Florida than in New York. Is that possible?" Introducing Giuliani at a pizza joint in Port St. Lucie on Sunday, Long Island's GOP Rep. Peter King nearly started a riot over who was better, the Mets or the Yankees. The cars overflowing the pizzeria's parking lot were covered in NYPD bumper stickers, and the restaurant itself sat only one block away from New York Street.

Yet, Giuliani is still so wrapped up in the post-9/11 Cult of Rudy that it hinders his campaigning in ways he apparently fails to see. His campaign is obsessive about security -- keeping him distant from voters much of the time. After a "Women for Rudy" event in Orlando, a bodyguard snapped at one woman for trying to duck under a velvet rope to actually meet the candidate. While actor Jon Voigt, who joined Giuliani on the trail in Florida, mingled easily with voters, Giuliani rushed from the podium to his waiting motorcade. In Little Havana, Giuliani and his entourage marched out of a room full of reliable supporters just minutes after his speech ended, brushing past elderly Cuban ladies on their way. On Sunday in Port St. Lucie, local police stood guard over a pizzeria where he spoke as if Giuliani were already president.

Essentially, Giuliani's bet-it-all-on-Florida strategy appears to have been too clever by half; by the time the primary race got to Florida, he was barely a part of it anymore. What will likely be one of the final indignities of this election cycle for him came Saturday night, when Florida Gov. Charlie Crist -- who nearly endorsed Giuliani last fall -- came out for McCain instead. Crist hugged McCain onstage at a GOP fundraising dinner in St. Petersburg, while Giuliani addressed a similar shindig in Orlando. Crist never gave the Giuliani campaign any notice about his surprise move, leaving Giuliani aides feeling stung. "Someday, I'll talk about that, but not right now," his campaign manager, Mike DuHaime, said Sunday evening.

Giuliani tried to take the snub in stride, saying Sunday: "The governor has the right to endorse anybody he wants, but I think ultimately the voters of Florida are going to vote based on who's best for Florida." The problem for him, though, is that it's looking like fewer and fewer voters in the Sunshine State think he's that candidate.