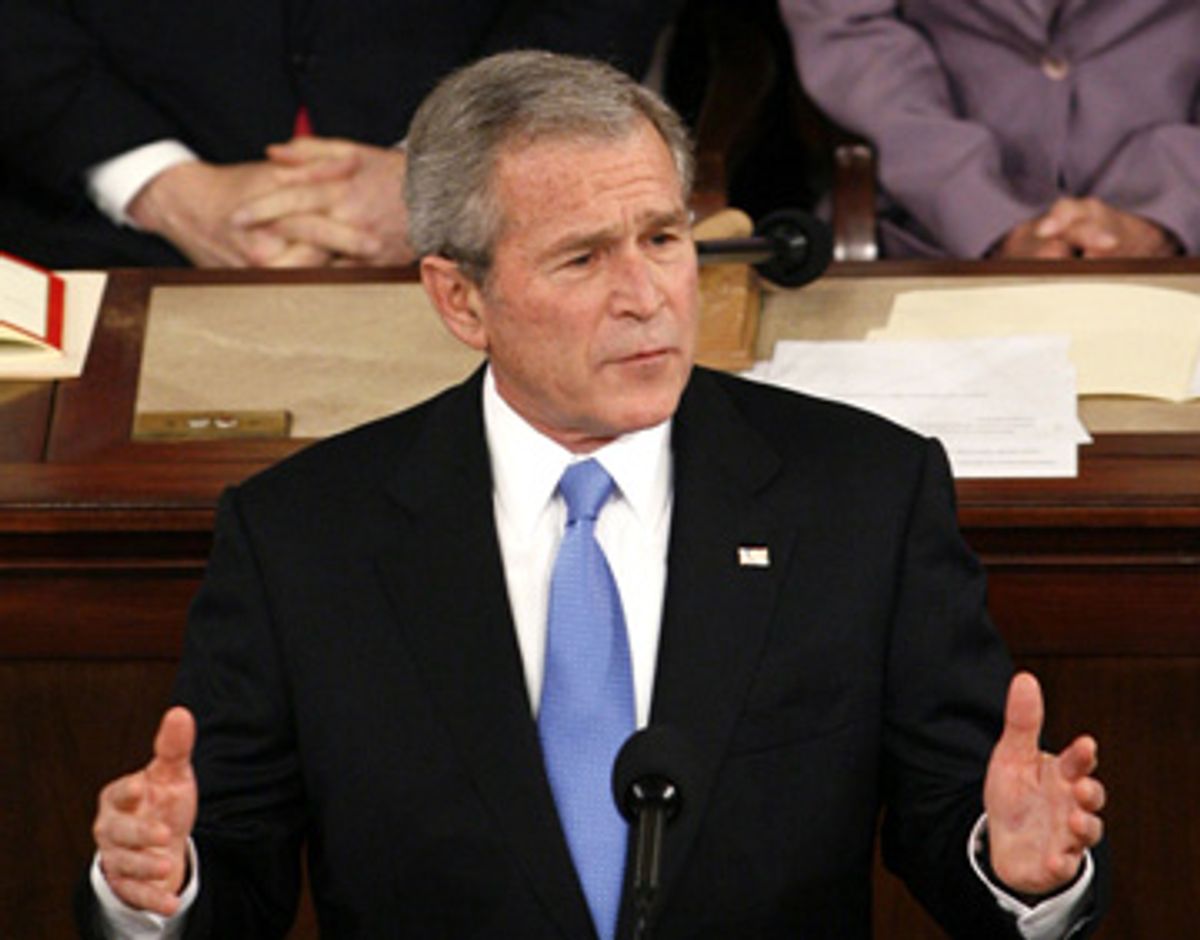 About the only drama in Monday night's State of the Union address was provided by a clever speechwriter's gambit. Rather than offering a verdict on the nation's health in its traditional place at the beginning of the speech, George W. Bush waited a full hour until his penultimate sentence to declare, "So long as we continue to trust the people, our nation will prosper, our liberty will be secure and the state of our union will remain strong."

This was scant reason to miss the debut of HBO's "In Treatment" or to delay the thrill of cleaning out the medicine chest. The poignancy of the president's final State of the Union night was hard to detect, except when the network anchors needed to fill dead airtime by talking about it.

Bush was ballyhooed in advance as planning to speak of his guiding philosophy. But all he offered was the banal sentiment: "As Americans, we believe in the power of individuals to determine their destiny and shape the course of history. We believe that the most reliable guide for our country is the collective wisdom of ordinary citizens."

That ode to the genius of the American people invites a look at the president's popularity ratings. Bush came into this State of the Union address on a statistical roll that it will be difficult, if not impossible, for his successor to match. Beginning with the president's first formal State of the Union in 2002, each year he has stood before Congress with a lower approval rating (courtesy of the Gallup poll) than the year before. In January 2007, it seemed a daunting challenge to drop below his 36 percent approval rating. But Bush -- a president who fantasizes that he will be absolved by history -- was up to the task, falling below the one-third mark.

Any major Bush speech carries the built-in danger that the president will suddenly sound the drums of war by adding a new member to the Axis of Evil. Luckily, the citizens of places like Costa Rica and Estonia could go to bed feeling secure Monday evening.

But when it came to Iran, a charter member of the trio of evildoers, Bush waxed amnesiac. There was no reference to the latest National Intelligence Estimate that found that Iran had abandoned its nuclear weapons program. Instead, Bush warned that Tehran "continues to develop its capability to enrich uranium, which could be used to create a nuclear weapon." He also demanded that the leaders of Iran "come clean about your nuclear intentions and past actions."

There is little that Bush could say at this point about Iraq that has credibility. And it seems almost unsporting to waste time parsing his words for omissions, misstatements and contradictions. Yet it was dizzying Monday night to hear Bush invoke Osama bin Laden -- he who shall not be named -- to justify his Iraq policy. It was a feat of presidential logic to argue, in essence, that multiplying two failures together (bin Laden and Iraq) equals success. As Bush put it, "Last month, Osama bin Laden released a tape in which he ... admitted that coalition forces are growing stronger in Iraq. Ladies and gentlemen, some may deny the surge is working, but among the terrorists there is no doubt."

On a day in which Senate Republicans failed to thwart the filibuster against the FISA bill, Bush limited his discussion of the topic to just nine sentences near the end of the speech. There was no public threat of a veto if Congress sends the president a 30-day extension for the eavesdropping legislation that will expire Feb. 1. And compared with possible Bush complaints about weak-kneed Democrats obstructing the war on terror, the president sounded positively muted when he said to Congress, "If you don't act by Friday, our ability to track terrorist threats would be weakened and our citizens will be in greater danger."

As the clock runs down on his presidency, Bush cannot avoid fostering the soft bigotry of low expectations. It was not much, but Bush does deserve a teaspoon's worth of credit for reiterating his humane approach to immigration, even if that sentiment would get virtually anyone else excommunicated from the Republican Party. On the eve of Tuesday's Florida primary, John McCain, a moderate on immigration, would not have dared to say as Bush did, "We must also find a sensible and humane way to deal with people here illegally." In GOP circles these days, "humane" is a fighting word.

Bush's new cause is to bravely battle against congressional earmarks. (In this case, he is a weak echo of McCain.) It is interesting -- and surely coincidental -- that the president only recognized the budget-busting folly of these pork-barrel projects after the Democrats took over Congress in 2006. Yet Barack Obama appeared to be cheering when Bush declared, "If you send me an appropriations bill that does not cut the number and cost of earmarks in half, I will send it back to you with my veto."

Alone among the three senators still in the race for president, McCain had the wisdom to skip the synthetic spectacle entirely and remain in Florida. Hillary Clinton would have been entitled to give one of her signature laughs when the president crowed that his "budget will keep America on track for a surplus in 2012." Bill Clinton, of course, bequeathed a balanced budget to his spendthrift successor in 2001.

The best rhetorical flourish of the evening, though, was not a product of the Bush speech-writing team but came from Obama. In a video released by his campaign, Obama said, "Each year, as we watch the State of the Union, we see half the chamber rise to applaud the President and half the chamber stay in their seats ... Imagine if next year was different. Imagine if next year, the entire nation had a president they could believe in."

A year from now, a different president (probably a woman, an African-American, a Mormon or a former POW) will be giving a maiden speech from the well of the House of Representatives. The nation will still be mired in Iraq and may well be battling to emerge from a recession. But one thing is certain: Nostalgia for the good old days when George W. Bush gave a State of the Union will be muted if not nonexistent.