McCain tees off on Romney

The emboldened front-runner took shots at Romney throughout Wednesday's GOP debate, as if winning seemed less important to him than pissing off his rival. 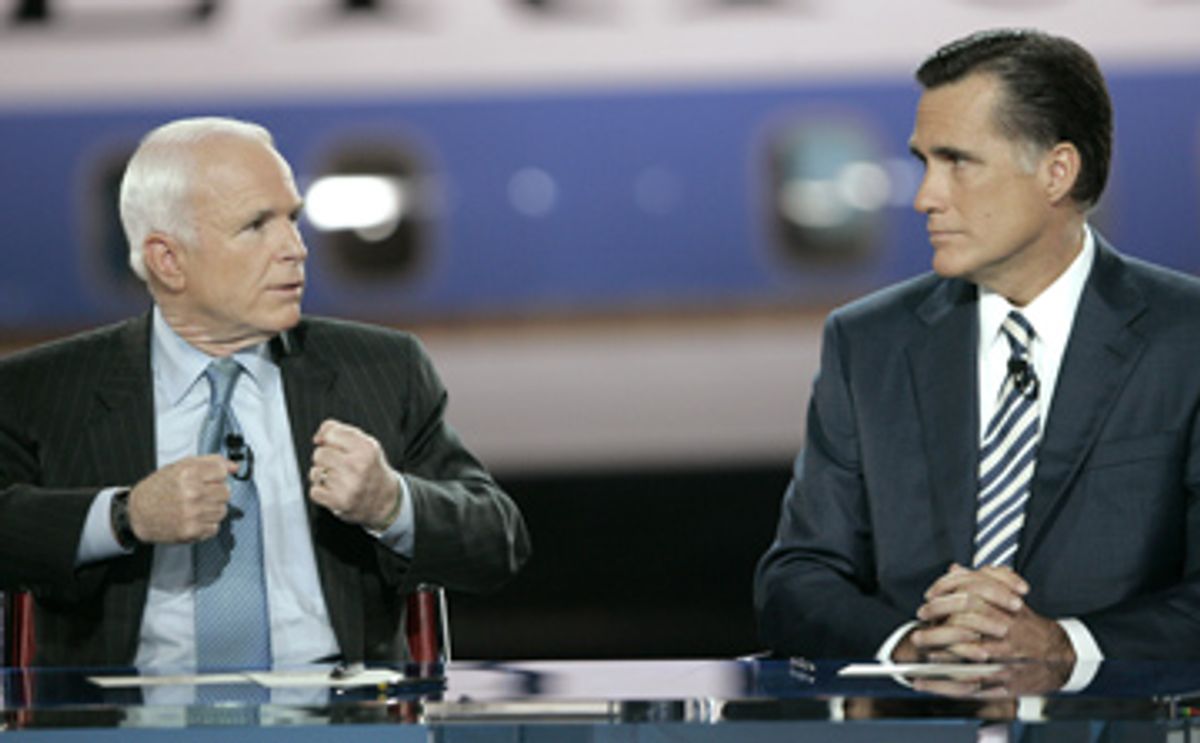 For what will likely be the last debate of the Republican primary campaign, organizers lined up the dwindling GOP field in front of Ronald Reagan's old Air Force One jet, now the centerpiece of the Reagan presidential library. They left the decommissioned F-14 Tomcat fighter -- complete with missiles under its wings -- on the lawn out back (where presumably it serves to scare off any of the neighbors who might have designs on sneaking in to steal some presidential jelly beans). By the end of the night, it was hard to escape the sense that the wrong plane served as the backdrop for what turned into a prolonged series of testy exchanges between John McCain and Mitt Romney. Alas, Mike Huckabee and Ron Paul were relegated to combat observers.

A day after McCain made the GOP nomination his to lose by beating Romney in Florida's primary, Romney sometimes looked and sounded rattled, as if McCain's ability to return from the political grave had gotten inside his head. But he spent the night pressing the case that McCain isn't reliably conservative enough to unite the party and hold the White House in the general election. McCain, meanwhile, seemed happy to dig and dig at Romney throughout the debate; winning elections next Tuesday seemed less important to him than just pissing off his rival.

"If you get endorsed by the New York Times, you're probably not a conservative," Romney said early on, when asked if McCain was "outside the mainstream" of the Republican Party. The line might as well have been a "kick me" sign on Romney's back. McCain practically came out of his shoes. "Let me note that I was endorsed by your two hometown newspapers who know you best, including the very conservative Boston Herald, who know you well better than anybody," McCain said with a nasty grin. "So I'll guarantee the Arizona Republic will be endorsing me, my friend."

Romney had to defend his record as Massachusetts governor from a laundry list of McCain criticism; he seemed so flustered by the attacks that he had to keep looking down at his notes, underlining points on a card as he spoke them out loud. He did better when he stuck to his "Washington is broken" theme, though at times he struggled to avoid listing President Bush among the vandals in response to questions from CNN, Politico and Los Angeles Times reporters.

McCain continued to claim Romney supported timetables for withdrawing troops from Iraq last year, a charge that amounts to surrender in McCain's world. He brought it up late in the Florida campaign to put Romney on the defensive on foreign policy, and the tactic again did exactly what it was intended to do. "Unequivocally, absolutely no," a defensive Romney shot back. "I have never, ever supported a specific timetable for exit from Iraq." Romney glared at McCain. "By the way," he said, "raising it a few days before the Florida primary, when there was very little time for me to correct the record ... sort of falls in the kind of dirty tricks that I think Ronald Reagan would have found to be reprehensible."

But sadly for Romney, the Gipper isn't around to referee this one. While many newspapers and news organizations point out that McCain's charge doesn't stand up, Romney hasn't figured out an effective way to answer it without getting bogged down in a debate over national security that he probably can't win. "One of the two great regrets I have in life is I didn't serve in the military," Romney said, without revealing what the other one is. "I'd love to have."

At a fundamental level, McCain's strategists appear to think Romney's karmic balance on negative attacks is so far in the red that they can get away with this one. And in fact after the millions of dollars of ads Romney ran accusing McCain of favoring amnesty for illegal immigrants or ripping Mike Huckabee on economic issues, it was easy to tune out his protests that McCain was treating him unfairly now.

"Is it not fair," Romney asked, "to have the person who's being accused of having a position he doesn't have, be the expert on what his position is?" He won applause from the audience, but McCain's endorsement before the debate by Rudy Giuliani, who pointedly noted that he and McCain had never run ads attacking the other, was a reminder of how much the rest of the GOP field resented Romney's televised hectoring through the fall.

Still, McCain sometimes went overboard. It's not easy to make people feel sorry for Romney at this point in the campaign, but the answer McCain gave to the question, "Is Governor Romney ready to be a military commander?" was gratuitously mean.

"Oh, I'm sure that, as I say, he's a fine man," McCain said nonchalantly. "And I think he managed companies, and he bought, and he sold, and sometimes people lost their jobs. That's the nature of that business."

McCain had been gracious Tuesday night in his Florida victory speech, but a day later, the prospect of kicking Romney while he was down appeared to be too much for him to resist. The campaign could soon be all but over. California Gov. Arnold Schwarzenegger will endorse McCain Thursday, joining Giuliani, and other big names may fall in line before Tuesday's 24 elections. If McCain does win the nomination, he'll have a hard enough time uniting the Republican Party around his candidacy without gloating his way through the home stretch.

But after a hard-fought campaign whose twists and turns lasted more than a year, he doesn't seem to be able to help himself. Maybe that's just the nature of this business.