The qualms before the storm

How might Clinton and Obama handle the Oval Office? On the eve of Super Tuesday, what we still don't know could come back to haunt us. 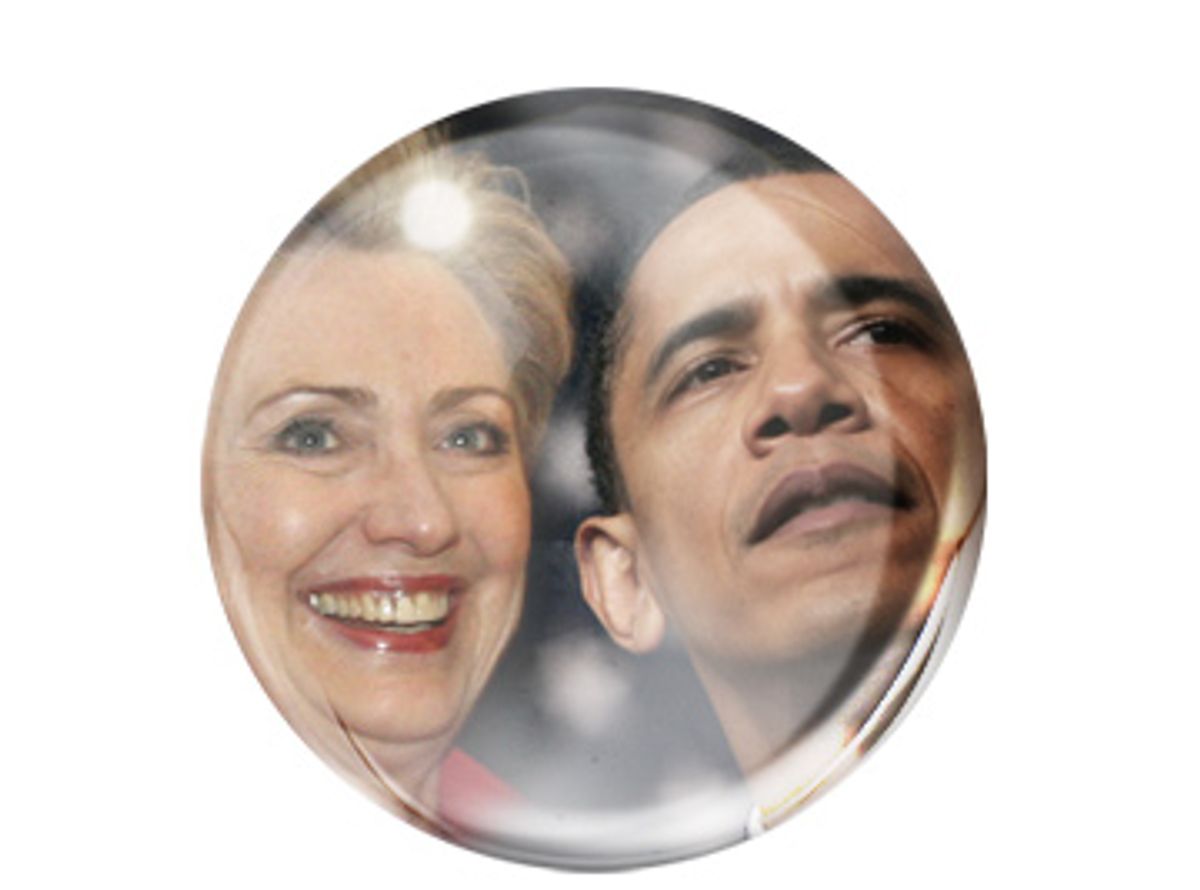 After 18 debates, $41 million in television ads and more town meetings than New England witnessed since the dawn of democracy, what is left to know about Hillary Clinton and Barack Obama? In theory, a year-long (and counting) presidential campaign can be justified as an attempt to teach us about the candidates by replicating the pressures of the Oval Office, much as planning a wedding imperfectly mirrors the stresses of marriage. But, in truth, so much that voters need to know about the next president is unknowable.

I first interviewed Hillary Clinton in the governor's mansion in Little Rock in September 1992. I have been following Barack Obama closely since he made his first test-the-waters foray into Iowa in September 2006. And yet as a New York primary voter, I feel like I will be groping in the dark next Tuesday when I pull the lever for Clinton or Obama. The old-fashioned voting machine will register my choice with a satisfying ker-chunk, but the sound in my ears will be the dismaying roar of continued uncertainty. Try as I might to accentuate the positive, I cannot fully transcend my reservations about both candidates.

What gives me pause is the memory that the last three newly elected Democratic presidents had a bumpy arrival in the White House. (Lyndon Johnson, elevated by the assassination of JFK, was a special case.) The generational torch may have been passed to John Kennedy in 1961, but so was (courtesy of the Eisenhower administration) the planning for the ill-conceived Bay of Pigs invasion of Cuba. Jimmy Carter (in whose administration I served) faced what turned out to be an insurmountable learning curve going from a single term in the Georgia gubernatorial mansion to the White House. As for the early days of the Clinton presidency, it is hard to know whether to start with the slapdash way the White House staff was chosen, the three tries to select an attorney general, the Waco disaster or that hardy perennial, the failure of healthcare reform.

What follows is a personal list of some of the things that I wish were clearer in my crystal ball about a would-be Obama or a second Clinton presidency. This exercise is not designed as a backhanded endorsement of either candidate, since I am genuinely torn in my allegiance. Rather, if you must, regard it as the qualms before the storm.

In the ambition of her healthcare plan (which is more far-reaching and more expensive than Obama's) and many of the policy proposals in the campaign (such as energy), she has broken with the cautious-to-a-fault style that she had nurtured in the Senate. Was this merely a tactical gambit to respond to the bold challenge in the issues primary from John Edwards on her left? Or does this represent -- as some of her advisors have assured me -- a permanent rejection of the tiny-steps incrementalism (remember school uniforms) that characterized much of Bill Clinton's presidency?

What lessons should we draw from her mixed record on Iraq? Rehashing her vote to permit George W. Bush to go to war or psychoanalyzing her refusal to apologize for her 2002 misjudgment has become futile. I have respect for her current position on Iraq, since it took some gumption to resist the political demands for a pell-mell withdrawal upon taking office. But I wish I knew how skeptical she would be when the intelligence community comes up with its next "slam-dunk" warning about terrorism or a rogue state's alleged nuclear-weapons program.

Even after removing Grand Inquisitor Kenneth Starr and the dry hole that was Whitewater from the equation, there were undeniably sleazy undertones to the Clinton years. In particular, there was the 1996 fundraising scandal and the pardon-me excesses of Clinton's last days in office. Even though Hillary was not responsible for much of this muck, has she been chastened by the experience?

Yes, she has repeatedly said, "It's my name on the ballot and it will be my responsibility [to be] president and commander in chief." But can Bill Clinton contain himself for long, no matter what promises he makes to his wife? Will voters wish at the end of four years that he spent more time battling AIDS worldwide and less time confusing lines of authority in the White House?

No one in recent memory has had more of a charmed life politically, from running against the obnoxious Alan Keyes for the Senate in 2004 to stunning Clinton and the world with his breakaway victory in the Iowa caucuses. There are moments when it is easy to get the sense, despite the leavening factor of his wife, Michelle, that Obama believes his own press clippings. But sooner or later the golden coach will turn into a pumpkin. How will he react to adversity?

Obama's bring-us-together rhetoric has been a hallmark of his career from the 2004 convention speech to his victory-night address after the South Carolina primary. What does Obama do, for instance, if Congress refuses to approve his healthcare plan, despite all of the blandishments and bully-pulpit arguments? The battle against Washington cynicism has proven to be politically potent, but in a showdown with an unproven president my initial bet would be on the forces of status-quo politics.

Few would have guessed when this campaign began that it would be Obama (and not Hillary Clinton) who would be offering the least access to the press. So far Obama has gotten away with his ill-disguised disinterest in answering questions from his traveling press corps. What does this say about his willingness to be challenged about his views and his policies? As John Kennedy demonstrated, jousting with the press can be both good politics and an effective way to hear alternative voices.

No matter how he gilds his résumé, Obama cannot hide his lack of any administrative experience or the lack of any exposure to a Democratic presidency. What models will he follow in organizing a White House? Will he practice Chicago-style politics and prize loyalty over Clinton-era expertise? Or, ultimately, would he be such an inspirational leader that this gap in his knowledge does not matter?

Too many questions about both Clinton and Obama. And too little time before Tuesday. On reflection, maybe we should either have longer presidential campaigns or better crystal balls.