Clinton and Obama fight on to the next round of primaries -- and a probable matchup with John McCain. 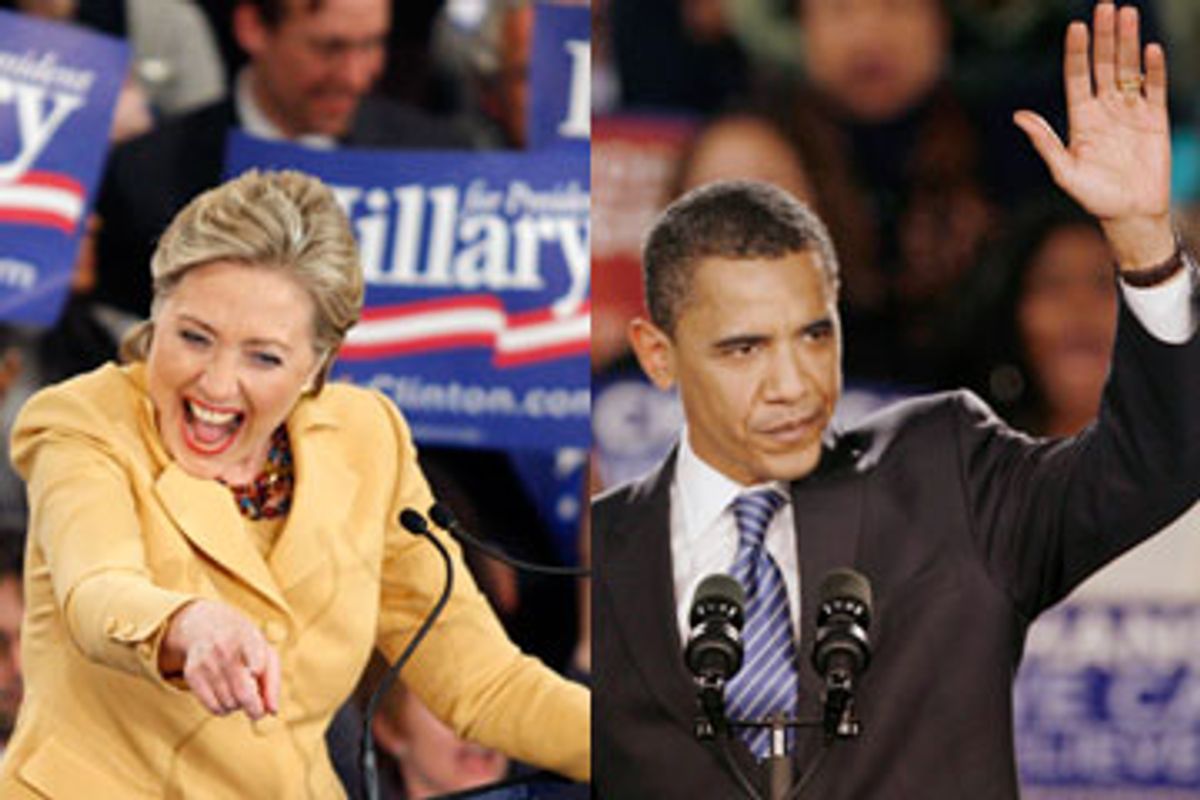 Never before in the long history of presidential politics have so many voters in so many states gone to the polls and their caucus sites on the same day -- and decided so little. Instead of wrapping things up, the delegate contests in 24 states gave certainty a bad rap.

As Tuesday night flowed into Wednesday morning, the Democratic race once again lacked a coherent story line. The surging Barack Obama movement, fueled all week by the Kennedy family endorsements, reached its temporary limits. Hillary Clinton -- who seemed just 48 hours ago to be on the wrong side of history -- managed to hold on to enough primary states (from Massachusetts to California) with her coalition of lower-income white women, white Catholics (particularly in the Northeast) and Latinos from coast to coast.

On the Republican side, John McCain stumbled to the cusp of the nomination -- aided by a Mike Huckabee resurgence in the South at the expense of Mitt Romney. His biggest breakthrough of the night came when he carried California, following earlier victories over Romney in New York, New Jersey and Illinois. While McCain still arouses intense conservative opposition and has yet to prove that he can win in traditional GOP climes, he does seem poised to be bathed in the spotlight underneath the balloon drop at the Republican National Convention.

If McCain is indeed the Republican nominee, America will in 2008 elect a sitting senator to the presidency for the first time since 1960 and for only the third time in history. But it remains anyone's guess (and it is risky to hazard one) whether McCain's Democratic senatorial opponent will be the Gentlelady from New York or the Gentleman from Illinois.

The Clinton-Obama race remains so close that it promises to offer a crash course in the Democratic Party's arcane rule book. Because Democratic delegates are allocated on a proportional basis -- mostly by congressional districts -- we will not know until Wednesday (at the earliest) which candidate won a majority of the 1,681 delegates that were at stake on Woozy Tuesday. Obama's team claimed to have a modest delegate edge for the evening because the Illinois senator won his home state's primary and the caucuses in Minnesota, Kansas and Colorado by lopsided margins. Early Wednesday morning, MSNBC tentatively calculated that Obama would prevail in the Super Tuesday delegate race by a hairbreadth margin of 841 to 837.

Yet the Clinton campaign -- which has been losing altitude since Bill Clinton hogged center stage in the week before the South Carolina primary -- could argue that it was on the slow-but-sure comeback trail. While the former first lady's margin in California was partly powered by early votes cast before her time of troubles, the exit polls also revealed that Clinton beat Obama by 49 to 44 percent among voters who decided on the day of the primary.

Even though Democrats by the end of Tuesday had voted to select more than half the pledged delegates to the Denver Convention, the eight statewide contests (plus the District of Columbia primary) slated for the rest of February are likely to influence the short-term tone of the press coverage. Here the advantage lies with Obama since the states in play are either caucuses (Washington, Nebraska and Maine) in which the intensity of his support matters; primaries with a heavy African-American vote (Louisiana, Maryland, Virginia and D.C.); or contests that play to the first-term senator's unique strengths (a primary in his birth state of Hawaii and the open-to-everyone primary in the liberal reformist bastion of Wisconsin).

What the month of February offers Hillary Clinton is a chance to regroup. She has survived what was probably the best week that Obama has had in the campaign -- and her call for weekly debates plays to her strengths. She also needs to develop a new rationale for her candidacy, since voters have not been flocking to the polls brimming with enthusiasm for the notion that she is "Ready!" or that she promises a third Bill-and-Hillary term. What Clinton does have going for her is the pot of delegates at the end of the road -- the March 4 primaries in Texas (where Latinos are a force) and Ohio (a state with a heavy concentration of traditional lunch-bucket Democrats), whose voters almost perfectly mirror the demographic makeup of her core supporters.

Barack Obama, though, is the first insurgent candidate in history who goes into the far turn of the presidential race with a powerful fundraising advantage. Obama's army of small donors (who can keep giving over the Internet) contributed $20 million more than Clinton raised in January as she relied on traditional big givers (many of whom have hit their legal contribution limits). What this means is that Obama will be guaranteed the resources to make heavy TV advertising buys in all the states through March 4, while Clinton will either have to carefully hoard her resources or re-create her once-vaunted fundraising machine.

But money alone may not be enough for Obama to transcend the limitations of the coalition that has carried him this far. In states like Alabama and Georgia, according to the exit polls, Obama won more than 85 percent of the African-American vote. He also garnered a surprise victory in Connecticut -- on Hillary Clinton's doorstep -- by winning his traditional majorities among those with college degrees and family incomes over $100,000. The difference for Obama here was that a whopping 57 percent of the voters in the Connecticut Democratic primary were college graduates. Obama also carried Missouri -- thanks to another 85 percent sweep among African-Americans -- but still lost heavily among voters whose education stopped with high school.

These demographic breakdowns are certain to be endlessly analyzed by the most important voters still up for grabs -- the more than 500 "superdelegates" to the Democratic National Convention (governors, senators, House members and Democratic National Committee members) who have yet not endorsed a candidate. These are the free agents in the mix, and their importance is exaggerated by the difficulty that Clinton and Obama both face in assembling a Convention majority through the primaries and caucuses.

More than anything else, what these independent superdelegates are looking for is a winner in November. And the measure of the next month (and beyond) may be how well Clinton and Obama match up against a nontraditional Republican named McCain.