Requiem for a right-wing dream

Mitt Romney preached about a degraded America -- then quit the '08 race. Now hardcore conservatives have to cozy up to John McCain. 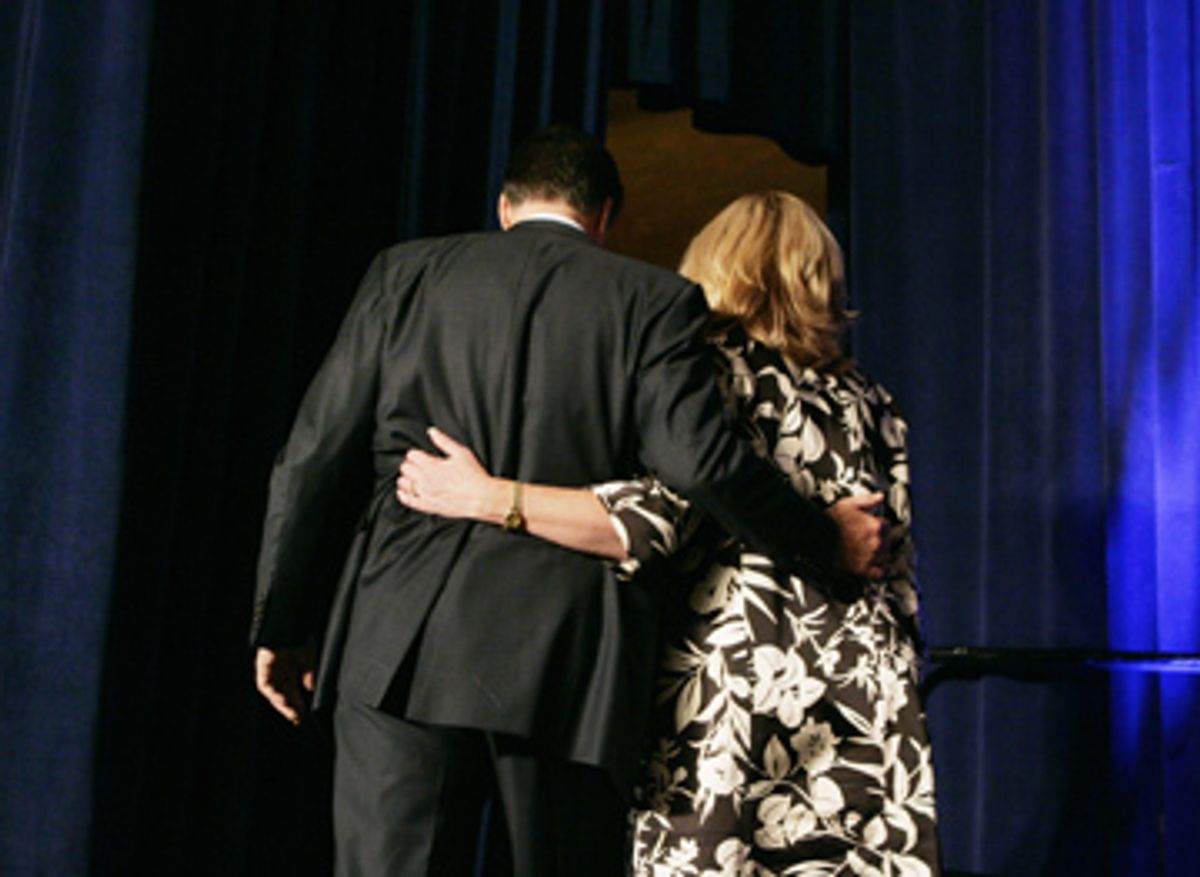 What was supposed to be Mitt Romney's last stand started off reasonably well Thursday. The crowd at the Conservative Political Action Conference was primed for him; cheers of "Mitt! Mitt! Mitt!" rose up even before he hit the stage. If there was ever a room where Romney could start the right-wing backlash of Rush Limbaugh's dreams against John McCain, this was going to be it.

But Romney proceeded to snatch away the last hope of hardcore Republican activists. He would not be their devoted conservative savior in the race for the White House. Instead of digging in to continue his campaign -- which fared rather miserably at the polls on Super Tuesday -- he quit. By the end of the day, a painful truth had started to sink in for the CPAC faithful: It would be McCain in '08, or bust.

"I think a lot of people are going to pout and say they won't [support McCain]," said Michelle Malkin, the conservative bomb-thrower, perched in the back of the room to live-blog Vice President Dick Cheney's speech at the conference. "But when it comes time for November," she conceded, "the closer we get, people will hold their noses" and support McCain over Hillary Clinton or Barack Obama.

That doesn't mean the hardcore base of the party will go easily. Romney's strategists had told talk radio host Laura Ingraham that Romney would be quitting the race just before Ingraham walked out to introduce the former Massachusetts governor -- but she still used her remarks to tear into McCain.

"I want you all to calm down -- calm down, simmer down, calm down, let's all come together here," she said as she took the stage. It was a jab at McCain; he'd admonished Limbaugh in the same manner a few days ago. There was more: "I don't think it's enough to say that you were a foot soldier in the Reagan revolution," she said, quoting a frequent line of McCain's. "I think the question is what have you been doing for conservatism lately."

The crowd roared with approval.

Armed with that lead-in, Romney loaded up his speech with plenty of red meat for the audience -- most of whom didn't yet realize it was his swan song. This provided a shot of dramatic irony -- if not sheer surrealism -- for anyone watching on television; while the crowd in the room was unaware, the news of Romney's deep-sixed presidential bid was already all over the networks.

"Even though we face an uphill fight, I know that many in this room are fully behind my campaign," he said, as his fans waved the bright red thundersticks that somehow became a campaign trademark. "You are with me all the way to the convention. Fight on, just like Ronald Reagan did in 1976."

He looked tired, but at the same time, more comfortable, more self-assured than he'd been since he lost the Iowa caucuses to Mike Huckabee, leaving him in a scramble to catch McCain. Young conservatives cried out, "No!" as they now realized what he was telling them.

"I want you to know, I've given this a lot of thought -- I'd forestall the launch of a national campaign and, frankly, I'd make it easier for Senator Clinton or Obama to win," he said. "I entered this race because I love America. And because I love America, in this time of war, I feel I have to now stand aside for our party and for our country. You guys are great."

It was a strange way to bow out for a man who, not that long ago, boasted that he was "an independent" during Reagan's administration and who voted for Paul Tsongas in the 1992 Democratic primary. (To boot, Romney spokesman Eric Ferhrnstrom wouldn't rule out a 2012 run, though he said it was too early to speculate about that.) Instead of making the traditional farewell speech at home, surrounded by his family, Romney went down swinging.

Suddenly, here inside the hallowed walls of the Omni Shoreham's grand ballroom, he rediscovered his zeal for the kind of talk on social issues usually reserved for nutty right-wingers. He accused Democrats of trying to kill American culture, for starters. "The attack on faith and religion is no less relentless," he said. "And tolerance for pornography, even celebration of it, and sexual promiscuity, combined with the twisted incentives of government welfare, have led to today's grim realities." It was as if he thought Ron Jeremy was part of Clinton's kitchen cabinet.

This Romney, mostly MIA since Iowa, never worked quite as well as the biz-whiz technocratic Romney who won Michigan and gave McCain a run for his money in Florida. "He was the strongest, most attractive alternative to John McCain, but he was still a deeply flawed alternative to most conservatives," Malkin said.

But it seems they had nobody else to turn to. In spite of his frequent flip-flopping in the campaign on issues near and dear to the crowd here, Romney seems to have emerged as the Barry Goldwater of 2008. "His positions were authentic," said Stephen Ontko, the president of the Kent State University College Republicans, who said only a true believer would have walked away via a speech during CPAC. By quitting where he did, Romney may have finally done what he couldn't do throughout the campaign -- erase all the lingering questions about what he really believed.

That doesn't seem to be the case for McCain. Though aides managed to get stickers, signs and T-shirts distributed widely in the 90 minutes between Romney's speech and his own, the Arizonan still seemed to be walking straight into enemy fire when he took the stage.

"It's been a little while since I've had the honor of addressing you, and I appreciate very much your courtesy to me today," he said. "We should do this more often." Last year, McCain skipped the convention for fear of a hostile reception. This year, he thought he was going to have to put down a Romney grass fire, but instead found himself the more-or-less uncontested favorite for the nomination. (Huckabee hasn't quit the race yet, but McCain's strategists see him as unthreatening enough that McCain made a point of praising the Arkansan in his speech.)

McCain had his troubles with the crowd, drawing some boos at the outset. But there were hardly any by the time he was done -- clearly he was here to mollify them to the best of his strategic ability.

The election, McCain said, will hinge on tax cuts and on conservative judges. Don't worry, he told the activists, he was with them on those.

But it's the war that truly motivates McCain, both personally and strategically, and that's where he deployed his toughest rhetoric: "Senator Clinton and Senator Obama will withdraw our forces from Iraq based on an arbitrary timetable designed for the sake of political expediency, and which recklessly ignores the profound human calamity and dire threats to our security that would ensue."

McCain can often seem like his heart isn't really in the conservative cause -- with his frequent appearances on "The Daily Show," his ironic way of talking about himself and his easy give-and-take with the press. But with the Republican Party on thin ice these days with the American electorate, he may well need the full support of the base if he wants to win in November -- a point right-wingers are eager to exploit.

"In a highly competitive, close campaign, Senator McCain will need the intensity and the conservatism of the grass roots of the party," said Ralph Reed, the one-time Christian Coalition leader-turned-lobbyist, who said he wasn't supporting anyone yet in the primary fight. "They're the ones who lick the envelopes, they're the ones who work at the phone banks, they're the ones who burn the shoe leather and ring doorbells."

McCain managed to all but win the nomination without winning over the hardcore GOP base in the primaries. But by showing up for CPAC on Thursday, and even sounding a bit contrite, McCain showed that he knows the potential importance of the folks on the far right, too.