DVDs you definitely don't have

An almost forgotten silent-comedy genius, ground-breaking British docs of the '50s and the Eurosleaze wonders of "Black Emanuelle's Box." 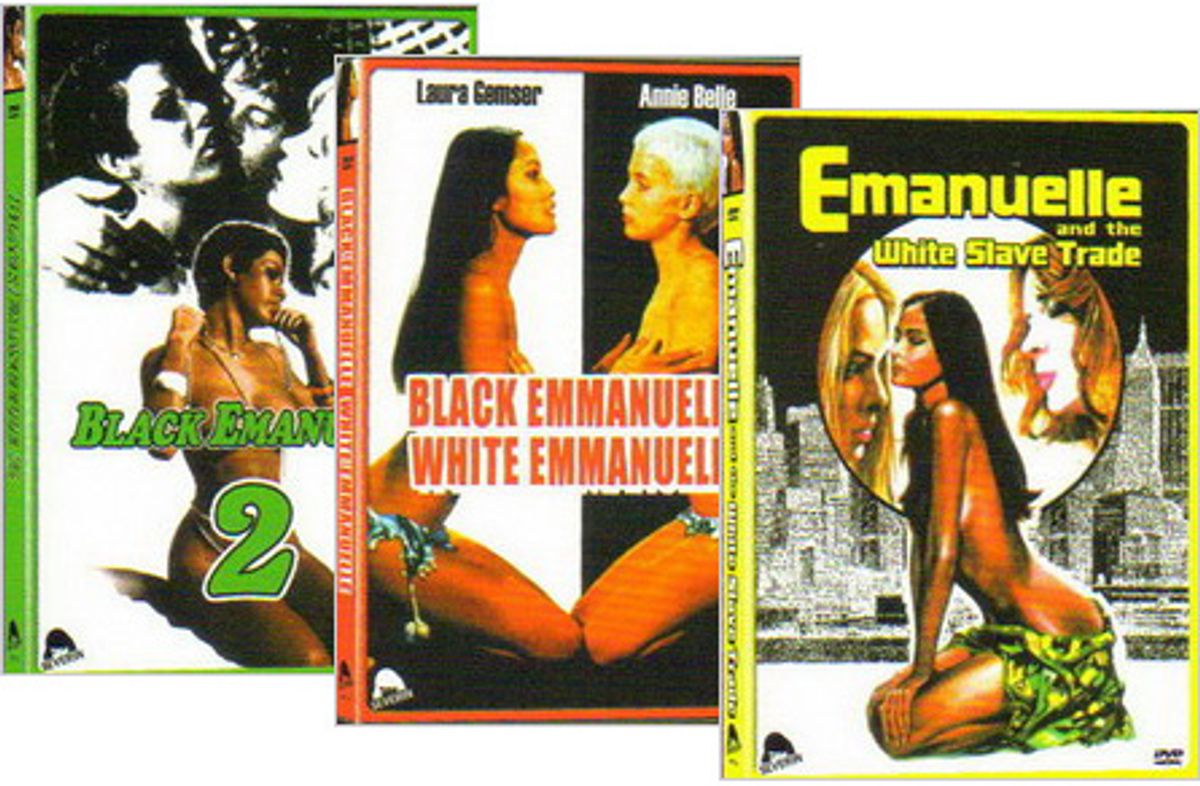 When I started thinking about remaking Beyond the Multiplex in blogulous form, I wrote to everybody I knew in the DVD world and basically told them, "Hey, I'm looking for stuff that's outside the mainstream and probably won't get reviewed alongside the four-disc director's cut of 'Transformers' or whatever. So bring it on!"

Jesus God. I had no clue. At first I was worried that I wouldn't find enough genuinely unusual and interesting stuff to cover. Ha! Instead, I find myself in the dazed, consumer-narcosis condition familiar to everybody -- journalist, industry Morlock or plain old movie buff -- who vaguely wants to know what's, you know, "new" and "worth seeing." If anything, the DVD market is more simultaneously confusing and exciting than the weekly deluge of new films. How in the name of "The Dark Heroine Muk Lan-fa" is anybody supposed to keep up with this stuff? At least if you focus on 1960s Cantonese-language action movies and Mexican wrestling films, like my old friend Todd Stadtman, your universe is somewhat limited.

Not me. I'm supposed to sit here in my armchair, smoking a pipe, wearing a Jimmy Carter cardigan and opining on all things cinematic. So within the last few weeks, I've been sent screener DVDs of classic silent comedy, groundbreaking early-'60s British documentaries, '70s softcore genre films, feminist experimental films and punk-rock undeground films from the '80s, classic European art-house cinema and "Vegan Cooking for Animal Lovers." (I haven't watched that, but one recipe is entitled "When Spud Gets Off Heroin This Is the Potato Salad He Will Eat.") And that's not counting the stuff I'd like to take more time to absorb and write about thoughtfully, like the Criterion Collection's amazing new Agnès Varda box set or Lars von Trier's "The Kingdom: Series Two" or Tsai Ming-liang's barely-released-in-theaters "I Don't Want to Sleep Alone" or Alix Lambert's Russian-prison-tattoo documentary "The Mark of Cain" (apparently referenced by David Cronenberg and Viggo Mortensen in their "Eastern Promises" research).

I still hope to get to all of those; part of the plan with the daily incarnation of Beyond the Multiplex is more DVD reviews, more often. But I'm just getting back to the frozen East after two weeks of family-related leave in the hallucinatory California sunshine. (Memo to self: Whenever possible, avoid flying into LaGuardia airport. At midnight. In February. With two small children.) So these really aren't reviews. This is more like a one-stop shopathon for relatively new and highly eccentric discs from the darker tidepools of the pop-culture economy. I've sampled them all (with one noted exception), but not exactly savored them to the fullest.

Stuff I've already reviewed John Turturro's bizarre and wonderful "karaoke musical" "Romance & Cigarettes" (Sony) and Philippe Garrel's Paris 1968 drama "Regular Lovers" (Zeitgeist) -- two of my favorite films of 2007 -- are both now available on DVD. So is James Gray's intriguing cop thriller "We Own the Night" (Sony), a movie that may defeat its own intentions but is well worth seeing. Argentine director Lisandro Alonso's mesmerizing, enigmatic "Los Muertos" (Facets) didn't make my 10-best list, but on seeing it again, I'm not sure why.

"The Harry Langdon Collection: Lost and Found" (All Day Entertainment/Facets) One of the hottest screen comedians of the 1920s, Harry Langdon was viewed by many peers like Mack Sennett, Harold Lloyd and Stan Laurel as the greatest of them all. Langdon's subsequent historical invisibility is something of a mystery. Maybe his deadpan, forlorn, man-child persona hasn't worn as well as the work of Lloyd or Charlie Chaplin or Buster Keaton, but as this extraordinary four-disc, 624-minute set makes clear, he clearly influenced (and was influenced by) all three of them, and many of his classic '20s shorts are sublime examples of the form. This set results from a massive recovery effort, gathering Langdon's work from commercial archives and private collections.

"Free Cinema" (Facets) While the oft-mythologized "Free Cinema" movement of the mid-1950s produced several of the filmmakers who would revolutionize British dramatic films in the next decade, including Lindsay Anderson and Karel Reisz, all the movement's films were documentary shorts that combined social realism with an ambitious, experimental sense of form. The Free Cinema rebels simultaneously sought to defy the then-dominant conventions of documentary filmmaking and also to uproot Britain's sharply class-delineated sense of self, producing a self-portrait of the postwar nation with all its awkwardness and contradiction on display. Many of these pictures remain absolutely thrilling, from the famous ones like Anderson's "Every Day Except Christmas" (about the workers at Covent Garden's flower market) and Reisz' expedition into London teenage life, "We Are the Lambeth Boys," to obscurities like Claude Goretta and Alain Tanner's semi-experimental "Nice Time" or "Enginemen," made by the Manchester collaborative known as Unit Five Seven. A tremendously important set for cinema-history buffs and all fans of postwar British film.

"Black Emanuelle's Box: Volume 2" (Severin Films) I'm no longer exactly the kind of trash-cinema devotee who's going to delve deeply into this collector's-edition set of mid-1970s Eurosleaze. Maybe part of me wishes I still was. The Italian-made "Black Emanuelle" series -- her name was sometimes spelled with one "m" and sometimes with two -- wasn't quite X-rated porn and wasn't quite R-rated imitation James Bond, but occupied a softcore zone in between the two. Various voluptuous actresses (in this set, it's Laura Gemser and Sharon Lesley) played the heroine, ever eager to pursue international criminals while largely disrobed, stopping along the way for the occasional three-way or girl-girl scene. Believe it or not, "Black Emmanuelle, White Emmanuelle," first of the three films in this set, was directed by Brunello Rondi, one of the writers of Fellini's "La Dolce Vita" and "8-1/2." (Whatever conclusions you choose to draw about the uncertain relationship between trash and art in Italian cinema are correct.) Includes a soundtrack CD, alternate scenes, interviews and lots of other stuff I'll never get to.

Lynne Sachs: 10 Short Films (Microcinema) Best known for her essayistic documentaries "Investigation of a Flame" and "Which Way Is East," Lynne Sachs has an alternate career as a creator of experimental shorts likelier to be seen in art museums than movie theaters. Ranging from 1986 to 2006, and from 3 to 12 minutes in length, the examples in "10 Short Films" are lyrical and challenging, personal but never dogmatic, often totally mysterious and just as often surpassingly beautiful.

"Bianca Beauchamp: All Access" (Halo-8) OK, I watched about five minutes of this one. I just want you to know that it exists. Hey, if you'd rather own a two-disc special edition of this not-exactly-pornographic documentary about the erotica industry's reigning "latex fetish goddess" than anything else on my list this week, more power to you. This film evidently follows the eponymous (not to mention pneumatically impressive) Ms. Beauchamp, seen on the cover wearing a becoming but not very comfortable-looking ensemble of pink latex bodice and lemon-yellow latex skirt, as she hosts a Montreal festival of latex-fetish enthusiasts. Obviously the T&A leer quotient is off the charts, but there's also an odd, half-sympathetic subculture documentary under the surface here. If you subtract Bianca and her killer outfits, most of the guys at Montreal Fetish Weekend could be attending a fantasy-wargaming convention.