George Romero's "Diary of the Dead" uploads the undead onto the Web. But wait -- aren't they here already? 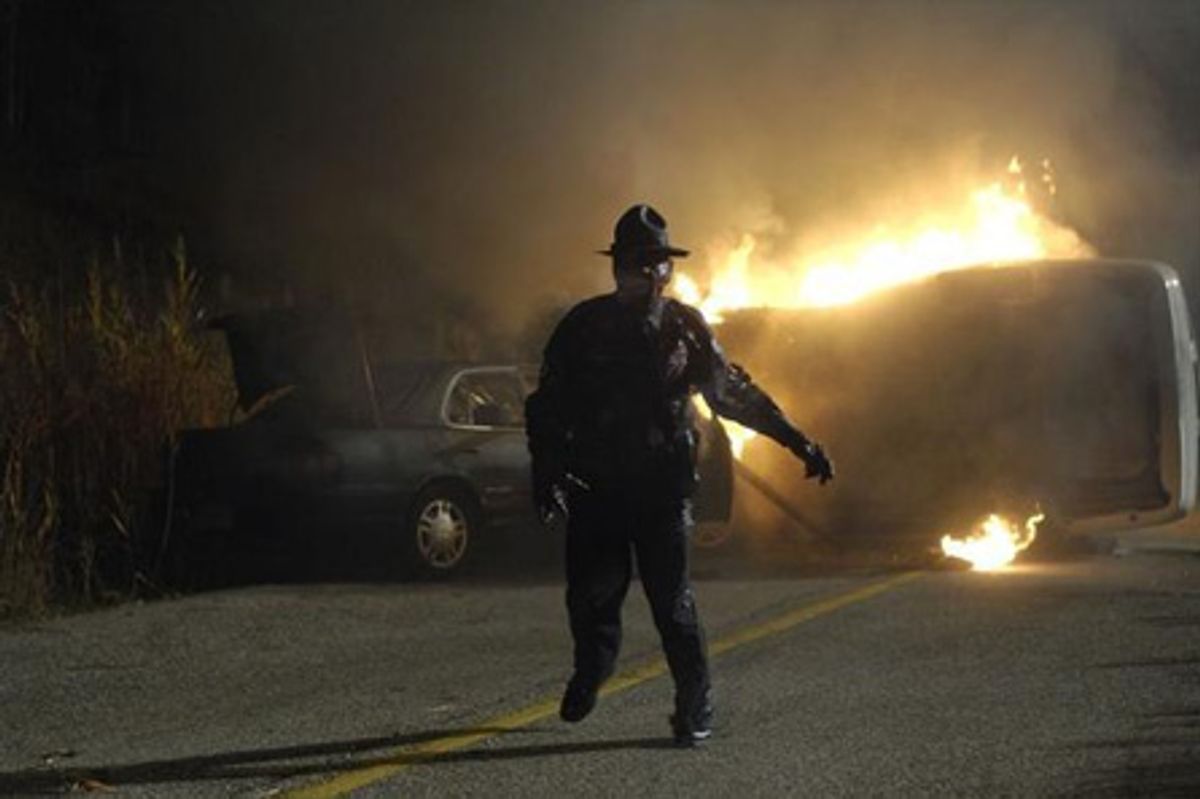 "Diary of the Dead"

Four decades after making a $115,000 black-and-white zombie movie in the Pennsylvania woods and reshaping horror-film history, George A. Romero has come full circle. Leaving studio dollars and high-end special effects behind, Romero has made a low-budget zombie movie set in the Pennsylvania woods. "Diary of the Dead," which premiered two weeks ago at Sundance and opens around the country today, is not another sequel or follow-up to his now-classic "Dead" trilogy, but more like an attempt to reimagine the original "Night of the Living Dead" in a post-9/11, post-Katrina, YouTube/MySpace world.

As a group of University of Pittsburgh student filmmakers headed by the compulsive Jason (Josh Close) and his recalcitrant sweetheart Debra (Michelle Morgan) witness the technological civilization around them abruptly crumbling under the assault of the brain-munching undead, they keep doggedly editing and uploading their videos to the Web. Everything we see in "Diary of the Dead," in fact, is supposedly shot by Jason and his friends and later edited by Debra, who explains her methods in an arch opening voiceover: "In some places I've added scary music to the video. Because I do want to scare you. Maybe it will wake you up."

Meanwhile, all the background video Romero uses to indicate the encroaching chaos around them is real, and a lot of it's recognizable: Desperate crowds outside the Superdome in New Orleans; street riots in Latin America and Asia; genocidal civil violence in Rwanda and elsewhere. As usual with Romero, the social and political subtext is barely veiled, if at all. "Diary of the Dead" is thematically ambitious and at least mildly ingenious in form (although it's too bad for Romero that the similarly structured "Cloverfield" came out first). His zombies, if you'll forgive me saying something so tedious, are always metaphorical, and represent the yawning darkness that lies beneath the sleek but fragile surface of our techno-consumer culture.

OK, that's the end of the good news. As long as I live I'll have a soft spot for Romero, a genuine filmmaking maverick of the pre-indie age who scared the living crap out of us while making us believe that resisting the Hollywood machine was both possible and necessary. Each of the films in his original trilogy has spawned its own genre, and I continue to believe that the unjustly neglected "Day of the Dead" (last of the three), claustrophobic and apocalyptic nightmare that it is, marks the creative end point of zombie cinema.

None of that excuses me from telling you that "Diary of the Dead" is a limp and dreary experience, at least after you get past its intriguing premise. It's poorly written and woodenly acted, completely formulaic and hopelessly imprisoned by both its genre and finally its form. I mean, it's great that George Romero knows about MySpace, I guess, but spicing up a middling, muddling zombie flick with a few electronic-lifestyle fillips is beneath him, frankly. Romero didn't actually go back to Pittsburgh to make this movie; he shot it in Canada just like a middlebrow Hollywood director would, and something about that fundamental betrayal seems to infect the whole enterprise like a single zombie bite.

Sure, there are a couple of good exploding-eyeball jolts, and one delirious scene involving a zombie-fighting deaf Amish farmer that recalls Romero at his loopiest. But the central characters are dull, near-anonymous archetypes -- the soulful stud, the nerd, the rich playboy, the good girl, the Texas cheerleader -- and except for the Amish interlude the plot moves from one recycled episode to the next. Our voyagers head across Zombylvania in a Winnebago, but that's not safe. They find shelter with one group of scary-looking survivalists but are preyed upon by another. Their attempts to go home involve meeting family members who, let's just say, have developed new priorities, and they end up in a super-secure retreat that proves a little less safe than advertised. Never seen any of that before, have you?

None of that might matter if the movie were made with some vigor or intensity, but I can't help feeling that Romero himself is finally bored with the strictures of the genre he invented. What was fascinating about "Day of the Dead" (and, at least in spots, about the "28 Days Later"/"28 Weeks Later" films) was the attempt to imagine a reconstructed human society in which something as devastating as brain-eating zombieism becomes an administrative problem or a quasi-manageable epidemic like AIDS or Ebola virus.

Like almost every zombie movie ever made (the "28" series included), "Diary of the Dead" defaults to an intellectually lazy, teenage-grade nihilism. It was both terrifying and appropriate, amid the nuclear terror and near-revolutionary climate of 1968, to point out that an unexplained and uncontrolled event might bring a sudden end to human civilization. But after 30 or 40 films in which the zombies eat everybody and the world ends, the shock value is lost and the message doesn't resonate anymore. The lights go up in the theater, and we have to go back to our undead jobs and our undead families. We only eat each other occasionally and we seem, at least officially, to be alive. Now that's scary.