All that mattered about the showdown in Austin was whether she could stop Barack Obama's momentum. Were her powerful closing words a magic bullet? 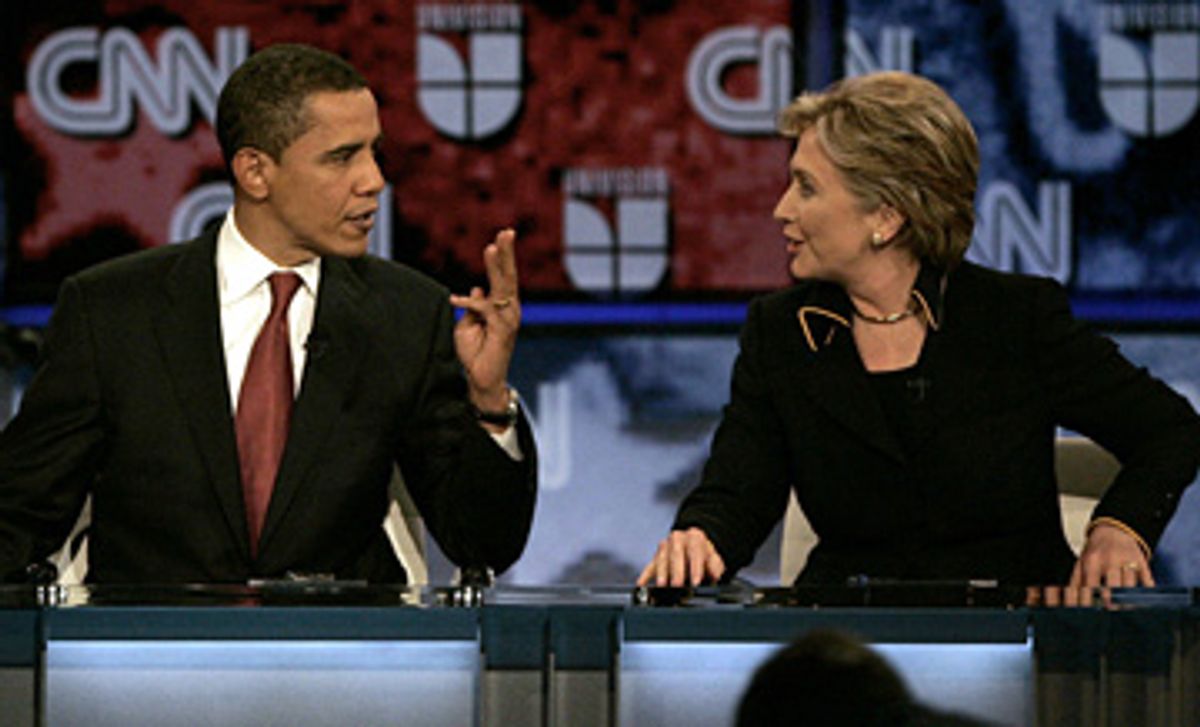 The line is a staple of Barack Obama's oratory: "We can't keep playing the same Washington game with the same Washington players and expect a different result." And it also encapsulated Hillary Clinton's dilemma Thursday night in Austin as she strode onto the stage for the 19th debate of what for her has been a long downward slide of a presidential campaign. She couldn't keep saying the same things in debates with Obama and expect a different result.

The former first lady is on a losing streak unrivaled in politics since Rudy Giuliani gave up his fantasy of being president. The latest ABC News-Washington Post polls, released just before the debate, showed that her once formidable leads in the March 4 Texas and Ohio primaries have shrunk to near invisibility. So the only relevant question about the 100-minute CNN/Univision debate was: Did she do anything to change the contours of the campaign?

For most of the evening, the answer was a decisive no. The debate started so slowly, with so much overall agreement on policy, that it was impossible to find the occasional hairs that Obama and Clinton were splitting. Only after the first commercial break, when the seemingly desperate CNN anchors Campbell Brown and John King decided to mix it up, was there a brief flare-up as Obama was asked about plagiarizing speech lines from Massachusetts Gov. Deval Patrick, a supporter. This gave Clinton a chance to deliver a clearly rehearsed, but potent putdown: "Lifting whole passages from someone else's speeches is not change you can believe in, it's change you can Xerox."

But Obama, who merely has to run out the clock on the rest of the primaries, had adroitly built an almost impregnable defense. In his opening statement, the first-term Illinois senator preempted Clinton's anticipated challenge on policy issues such as healthcare by saying, "What is lacking right now is not good ideas. The problem we have is that Washington has become a place where good ideas go to die." This was another version of Obama's mantra, the refrain that has left Clinton on the defensive for weeks: I can change the culture of Washington and, Hillary, you're too divisive to pull it off.

When pressed by the CNN moderators to respond to Clinton's jibe in stump speeches that "actions speak louder than words," Obama harked back to a 2005 scandal at Walter Reed Army hospital, which, incidentally, was first reported by Salon. As Obama put it, "If you talk to those wounded warriors at Walter Reed who, prior to me getting to the Senate, were having to pay for their meals ... while they're recovering from amputations, I think they've said that I've engaged not just in talk, but in action."

Throughout the evening, Clinton demonstrated once again that in a technical sense she is a more accomplished debater. While Obama, who was admittedly shaking off an audible head cold, seemed tentative at times, Clinton was consistently crisp as she rattled off her answers. True, sometimes her lines seemed forced: "We've got to get back to being the innovation nation." But she always radiated the sense that if pure competence -- rather than inspiration -- was what mattered in politics, she would be vaulted to the head of the class.

But it was emotion that Clinton needed, something to prompt Democratic voters (and, yes, superdelegates) to pause in their headlong rush to anoint Obama as the 2008 nominee. After quasi-public debates within her campaign on how aggressively to attack Obama, Clinton decided (with the notable exception of the Xerox crack about plagiarism) to walk on the mild side. She, for example, refused to take the bait when Univision's Jorge Ramos pointedly asked her exactly what she meant by her line in her stump speech, "One of us is ready to be commander in chief."

Bill Clinton's style as a president and a politician was to procrastinate until the last moment when he could (often, but not always) rescue himself with a dramatic gesture. That was never Hillary's approach, at least, not until Thursday night. But then came the final question of the debate as first Obama and then Clinton was asked about being "tested at times of crisis."

Barack's answer was easy-on-the-ears blather beginning, "What I look at is the trajectory of my life because, you know, I was raised by a single mom." As he spoke, it was easy to imagine the calculations that probably were going on in Hillary's head: Do I dare allude to Monica Lewinsky? Do I take the risk of coming across as a victim? How far can I go in the final seconds of the debate without my answer backfiring?

But all the armchair speculations in the world could not prepare viewers for the dignity and emotional power of Clinton's answer. "I think everybody here knows I've lived through some crises and some challenging moments in my life," she began. "And I am grateful for the support and the prayers of countless Americans. But people often ask me ... 'How do you keep going?' And I just have to shake my head in wonderment, because with all of the challenges that I've had, they are nothing compared to what I see happening in the lives of Americans every single day."

Then, with the careful geographical precision that is one of her political strengths, Clinton ended this riff by describing a wrenching visit to wounded soldiers at the Brooke Medical Center in San Antonio. It would be melodramatic to believe that a single debate response could rescue a drowning candidate. But Clinton's Austin answer seemed destined to, at minimum, be remembered as a high point of her campaign.

And then maybe out of carelessness or amnesia, Clinton went a beat too far. Turning to Obama, she said, "Whatever happens, we're going to be fine ... I just hope that we'll be able to say the same thing about the American people, and that's what this election should be about." It was a lovely sentiment, one that would make any presidential debater proud. The only problem was -- as the Obama campaign gleefully pointed out in a press release shortly thereafter -- that John Edwards had used almost the identical words in a mid-December debate.

It is safe to say that the overhyped plagiarism issue is officially dead, since both Obama and Clinton have now been nabbed for phrase-swiping. But what will be impossible to know for a few days is whether Clinton -- by recycling Edwards' rhetoric -- marred her moment. The very tentative guess is that Hillary Clinton still managed to inspire voters in Texas and Ohio to look again, perhaps for the last time, at the candidate whom they are poised to jettison in favor of Barack Obama.