"Be Kind Rewind" is no rib-tickling pop-culture mashup, but a loving tribute to all that is antiquated, homemade, lost or forgotten. 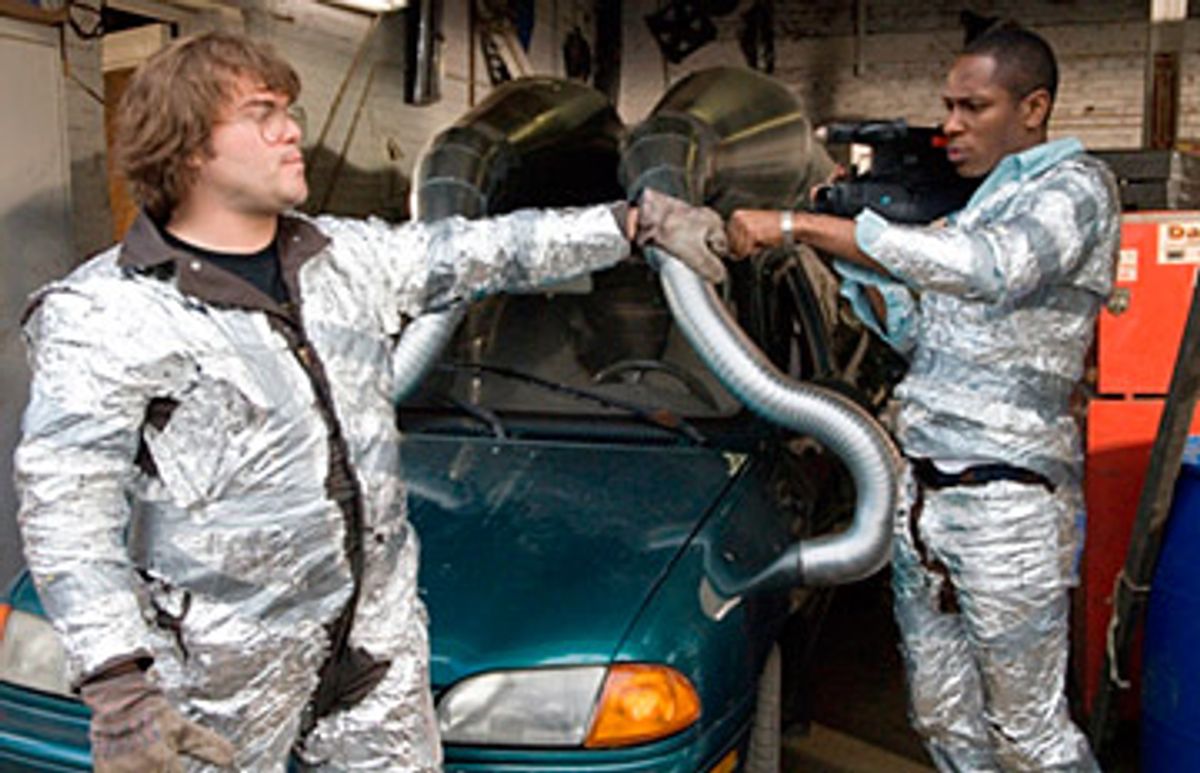 Jack Black (left) and Mos Def in "Be Kind Rewind."

In case you're still under the impression that Michel Gondry, he of all those Björk videos and "Eternal Sunshine of the Spotless Mind" and the underappreciated (if you ask me) "Science of Sleep," is some hipster 21st century pop impresario, "Be Kind Rewind" ought to disabuse you of that. Gondry is something else altogether, a DIY throwback, a believer in homemade technology and intimate personal expression whose success is a grand and perverse joke. He enjoys directing movies, for now, because he has lots of ideas and loves to make things, not because he wants to dazzle you with his cleverness while you sit there in the dark. At some point, he might give all his equipment to some 11-year-old kid he meets on the street and go back to making cardboard constructions in the garage.

Mind you, for Gondry "equipment" mostly means a camera, along with construction paper, cardboard and wooden doweling; he doesn't use digital effects or editing trickery and he never has. He pretty clearly sees himself in Jerry (Jack Black) and Mike (Mos Def), the two video-store idiots in Passaic, N.J., who start compulsively reshooting all the '80s and '90s Hollywood films they've accidentally erased in the downscale VHS-only emporium owned by Mr. Fletcher (Danny Glover, in sideburns and a cheap suit). Like Gondry, Jerry and Mike are just making the movies in their heads; maybe the movies in his head are not "Robocop," "Driving Miss Daisy" and "Rush Hour," and maybe he has a certain expressive aptitude they don't, but for Gondry those aren't the most important questions.

"Be Kind Rewind" is an achingly sweet, shambling creation that takes its time and wanders through slow-moving sight gags and odd supporting performances (like Mia Farrow's, as a dithery, lonely woman who is among the store's only customers) and ends up with a marvelously warm community-melding scene out of maybe 1924, with a bunch of people standing around on the street watching a black-and-white silent film. It absolutely is not a rib-tickling movie-movie mashup, featuring affectionate, hilarious takedowns of movies you love and movies you love to hate.

We see a fair bit of Jerry and Mike's earnest, incompetent, tin-foil-based remake of "Ghostbusters," but only brief snippets of "Men in Black," "Boyz n the Hood" and so on. These are pretty funny in small doses, and even in a strange way delightful, but it also hurts a little to watch them, and I think it's supposed to. It hurts the same way it would hurt to watch your teenage cousin's home video of himself performing a scene from "The Mummy Returns," and for the same reason: All of us have had our imaginations so thoroughly colonized by corporate entertainment product that to set ourselves free we have to exorcise it all first.

Mike and Jerry call their fast and sloppy film-replicating technique "sweding" (for reasons I can't really explain), and you might say that Gondry has sweded numerous movie conventions here. "Be Kind Rewind" has a thoroughly nonsensical plot and never tries to make sense, but then it's less a story about two guys and a video store than a symbolic celebration of everything that is antiquated, dilapidated, self-invented or simply untrue. Why is Mr. Fletcher obsessed with one-time African-American musical legend Fats Waller, who he claims used to live in the crumbling Passaic building now occupied by his failing store? For the same reason the store only rents videotapes, although we are apparently in the present tense and the chain store in town has DVDs.

Black and Mos Def make an appealing pairing. While the former displays his occasional scenery-munching tendencies, Def's low-key, laconic demeanor as Mike -- who desperately tries to keep the store working smoothly while Mr. Fletcher is away at a convention of Waller fans -- seems to calm him down a little. I wish there was more for both Glover and Farrow to do, separately and together; both are old pros who work wonders with their minimally sketched roles (and there's just a hint of possible romance between their characters). Sigourney Weaver shows up for a few minutes as the evil corporate lawyer sent to shut down the sweding operation and destroy all the copyright-infringing videos.

Actually, when it comes to the resolution of "Be Kind Rewind," Gondry is either too pessimistic or too starry-eyed, depending on your orientation. In real life, the kids from Biloxi, Miss., who spent their adolescent years cranking out a shot-for-shot "Raiders of the Lost Ark" remake have become minor media darlings, and may themselves be the subject of a Hollywood film. But Gondry doesn't want sweding to become a new pathway to pop-culture meta-celebrity, he wants it to liberate Jerry and Mike (and you and me) from pop culture altogether.

In the last scenes of "Be Kind Rewind," Gondry struggles to imagine a communitarian, utopian cultural work emerging from the streets of Passaic, where Fats Waller never lived. Jerry and Mike and Mr. Fletcher and Farrow's Miss Falewicz and everybody else in town come together to make a whimsical, faux-1920s silent about Waller's life. It may not be accurate as to fact, but it has all the joy and wonder and passion for what is lost and sense of redemptive social and personal possibility that lies unexpressed at the core of Gondry's work, and that the rest of this likable, haphazard movie can only flirt with.