Was her campaign stop in an Ohio town called Hanging Rock a metaphor -- or a symbol of dogged defiance? 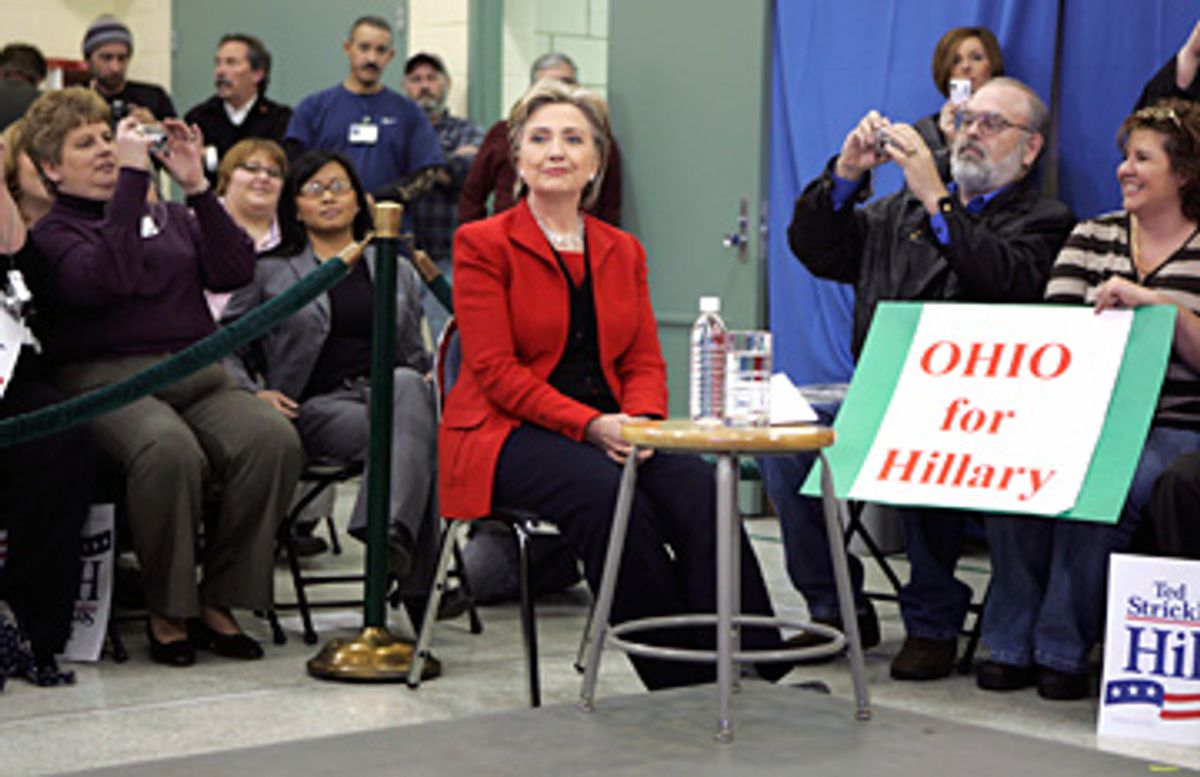 Gov. Ted Strickland, who represented this hardscrabble southeastern corner of Ohio in Congress, was trying to explain to his core constituency that Hillary Clinton has an emotional grasp on the values and vicissitudes of Appalachia. "She understands," the first-term governor declared, "that life is tough, that people struggle ... that, although people work really hard [and] do the best they can, they feel like life doesn't give them a fair shake."

Strickland was introducing Clinton at a town meeting in a community center here Thursday afternoon, her last stop in Ohio before heading for Texas for Friday and Saturday. The governor's words were inadvertently double-edged, since they could just as easily apply to the New York senator as she faces a double-barreled primary shootout on Tuesday that may end her campaign. For Clinton too has worked really hard, done the best that she can and occasionally expresses her frustration that she has not gotten a fair shake.

All winning campaigns are alike, every losing campaign is unhappy in its own way. Tolstoy, of course, never covered the primaries, but he would have understood the fascination with once-high-flying presidential contenders as they glimpse the specter of defeat. Some candidates on the brink are angry, some are catatonic, some are self-pitying and some are gleefully uninhibited because it no longer matters. But, in her latest character test, Hillary Clinton has chosen another route -- an unbowed, unbroken, unflappable determination to press forward as if she, not Barack Obama, was in the catbird seat.

At a press conference in Hanging Rock, Clinton allowed herself a moment of glee at the news that her campaign had raised $35 million in February -- not as much as the Obama campaign raked in, but more than enough to be competitive. "When people found out that I didn't have the resources to compete and I did put my own money in, it just set off a chain reaction across the country," she said, referring to her $5 million loan to her campaign, which has not been repaid. "Hundreds of thousands of people saying, 'Wait a minute. We want this campaign to go on. We believe in her. And I'm going to show that by contributing.'"

Since Tuesday night's Cleveland debate, in which she was widely faulted for complaining about always getting the opening-gun tough question, Clinton has mostly been running as if Obama did not exist. There have been occasional flash points, such as her exaggerated claim here Thursday about her opponent's healthcare plan. "I believe that you've got to have healthcare for everybody. It's got to be affordable ... My opponent wants only your children to have health insurance." In truth, while only Clinton explicitly advocates mandating that all adults obtain insurance coverage, both candidates call for about $100 billion in annual subsidies to make such policies affordable.

While stressing the economic hardship of Rust Belt and rural Ohio, Clinton has been playing to her strengths as a master of the nuances of policy. There was nothing feigned about her enthusiasm in Hanging Rock when she said, "I was really excited back in those White House days to help start Early Head Start." Again and again, from Lorain Tuesday to Hanging Rock Thursday, Clinton defines good policy with a single telling word: "smart." As she put it in Lorain, "What we've got to do is to get smart. I want to lead our country to be globally competitive."

But perhaps the most emblematic word for Hillary was uttered Wednesday during a news-free, but determinedly serious, economic roundtable in Zanesville. The speaker was not Clinton, but a panelist, Florine Mark, the CEO of Weight Watchers. "When I think of Senator Clinton, I think of the word 'safe,'" Mark said in a line that, had it been uttered by an ordinary voter during a focus group, might have prompted a pollster to write a "listen to the voice of the people" memo.

"I will always feel safe with this woman as president of the United States of America," Mark continued moments later. "If, God forbid, that red phone in the White House rings, I want her there to answer it." The hotline with Moscow is, of course, a Cold War relic. But another artifact of the 20th century may be the political quest for guaranteed-in-advance "safety."

Voters this year seem to be risk takers. What other message can you draw from the ascension of Barack Obama, a candidate who personifies promise? Even GOP primary voters have taken an uncharacteristic gamble on the sometimes non-traditional Republicanism of John McCain, a candidate who until recently had more enemies in his own party than Barack Obama. To offer a glib one-size-fits-all explanation: It may be that the voters are saying, "We thought we made the 'safe' choice in 2004 by reelecting George W. Bush in the middle of a war -- and look where it got us."

Where this flight from safety has gotten Clinton is to the edge of elimination if she does not win both Ohio and Texas on Tuesday. With Obama ahead by every measure and riding the crest of 11 straight victories in delegate contests since Woozy Tuesday Feb. 5, Clinton desperately needs primary votes and delegate victories, not spin from her handlers. But with her lead in the polls shrinking, particularly in Texas, Clinton has moved to the edge of night.

That is why there was something brave -- or foolhardy -- in the Clinton campaign scheduling an event in a town called Hanging Rock. With a population of 279, according to the 2000 census, this was not a mandatory vote-rich stop. With this dateline, it is easy to envision Hillary Clinton in "Perils of Pauline" fashion, teetering on the edge of the abyss or clinging to a rock wall with knees and fingernails.

Is this imagery unfair? The line within the Clinton camp is that the press pack is so wedded to writing premature obituaries for the New York senator that all evidence can be employed to fit that twilight story line. The belief in Hillary Land -- no, more accurately, the hope -- is that if Clinton survives by winning Ohio and Texas, that turn of events, in itself, will cause a massive revision in the campaign narrative. Suddenly, the question of the day would become: What is Obama's problem with being able to win big states?

With Obama's current delegate lead, this scenario seems a stretch. But from the overhyped Rudy Giuliani (remember him?) to the allegedly invincible Clinton (remember those days?), this has not been a great presidential season for the pundits and their tell-it-to-the-mountain Conventional Wisdom. Which is why it is folly to get too far ahead of the voters (remember them?) in this Hanging Rock of a campaign year.

If the end is nigh for the fantasies of a Clinton II administration, it will mark the family's first political defeat since Bill, then 34 years old, was defeated for reelection as Arkansas governor in 1980. (If you missed the intervening years, here is the plot summary: He recovered.) But what is fascinating is that, in these closing days before the Ohio and Texas primaries, Hillary has been consistent rather than the political changeling that her detractors portray. She is going out (if that is her fate) as she came into the political orbit three decades ago -- as a smart, serious and sound policy maven who leaves to others soaring rhetoric and stirring emotions.