Flag pins are for losers -- literally

Conservatives are still hitting Barack Obama for having an empty lapel, but guess what happened to all the presidential candidates who did wear flag pins? 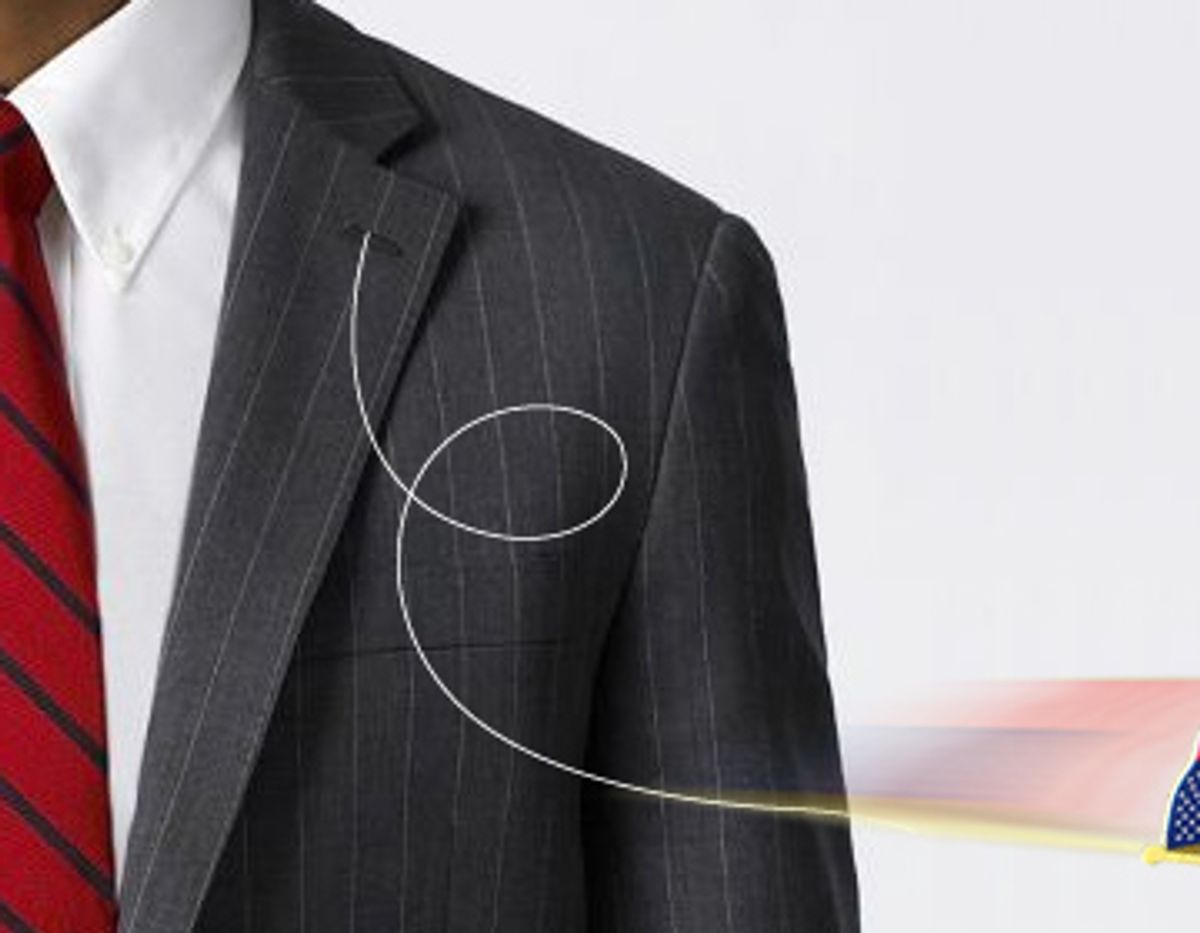 Is a man fit to be commander in chief if he won't even fly the flag from his buttonhole?

Does that man, Barack Obama, think he's "too good -- too patriotic! -- to wear a flag pin on his chest?" Because that's what William Kristol believes.

Grow up, the Chicago Sun-Times advises: "Oh for Pete's sake, Senator Obama, pin the darn American flag to your chest." Otherwise, the poor dope will "catch a world of hurt for ... polarizing comments [that] make him sound like a hardened leftist."

Has Obama's failure to wear a flag pin really done "more damage to his White House hopes than a bomb bursting in air?" The New York Daily News thinks so.

Or is it just possible that Barack Obama knows more about getting to be president than all of these pundits laid end to end, as they probably should be? Is it possible that an empty buttonhole might actually help a candidate of either party, now that the nation's No. 1 flag-wearer is circling the bowl with the lowest presidential approval ratings ever recorded?

Let's go beyond the Beltway and take a look. Out there on the campaign trail, who's actually been wearing lapel flags in this race and who hasn't -- and how's that been working out for you guys anyway?

On April 26 of last year in Orangeburg, S.C., the Democrats held the first debate in the campaign that never ends. First thing that morning the candidates were all in a hurry to throw on their clothes, grabbing any old thing that came to hand. Yeah, right.

It was the most important day of their political lives to date, and they agonized over each tiny sartorial decision. Windsor knot or four-in-hand? Blue or red?

Here's where everybody came out on lapel flags. The photo coverage of the debate shows that only Joe Biden decided to wear one. The other seven -- Mike Gravel, Dennis Kucinich, Bill Richardson, Hillary Clinton, Barack Obama, John Edwards and Chris Dodd -- went without.

Of course you'd expect that from a bunch of surrender monkeys, wouldn't you? So let's turn to the Republicans, tough-talking patriots to a man. Their first debate came a week later in Simi Valley, Calif. And sure enough, Tommy Thompson, Tom Tancredo and Rudy Giuliani, nonveterans all, were careful to pin on their flags.

Wait a minute, though. Mitt Romney, Ron Paul, Sam Brownback, Jim Gilmore, Duncan Hunter and Mike Huckabee all left their little flags back home on the bureau. And so did John McCain. Hmm.

By May 15, at the Columbia, S.C., Republican debate, Tancredo had stopped wearing his flag. By June, Democratic candidate Joe Biden had deflagged as well.

The only candidate of either party who chose to add a flag in the course of the campaign was Bill Richardson, who flagged up toward the end of the summer. With Biden's flag gone by then, Richardson had become the only Democratic candidate to wear a flag in the debates.

On the Republican side, Tommy Thompson continued to wear his flag till the bitter end, which came in August when he placed sixth in the Iowa straw polls. The empty Thompson slot was filled the following month by Fred. The lobbyist/actor picked up Tommy's banner, so to speak, and was still wearing it in January when he, too, dropped out.

Rudy Giuliani, who probably wears a flag to bed, dropped out a week later after racking up a pathetic 15 percent of the vote in the Florida Republican primary.

Do we see a subtle pattern emerging here? Every presidential candidate of both parties who ever wore a lapel flag during the debates, even as briefly as Biden, bought himself a one-way ticket to Palookaville.

And every major party candidate who remains viable today -- John McCain, Mike Huckabee, Hillary Clinton and Barack Obama -- has seldom if ever been spotted with a flag in his or her lapel.

Don't think the press hasn't been noticing, either. To this day there has been a steady drumbeat of silence in the media over the flaglessness of Huckabee's, Clinton's and McCain's lapels.

Nor would Obama's disrespect have made news if only he had thought to point the finger at everyone else still in the race when a TV reporter posed his trivia question back in October. But instead he gave an honest if incomplete answer.

Obama said he had worn a pin after 9/11 but stopped once he began to notice, and here I paraphrase wildly but no doubt accurately, that most of the people still wearing lapel flags were assholes.

On the evidence of the campaign so far, Obama wasn't the only one who noticed.

Clinton, Huckabee and McCain, we may say with confidence, would wear anything or even nothing at all if they thought it would help them win the nomination. Then why, when it came to miniature flags, did the three join Obama in opting for nothing?

Dosed with Pentothal, each would most likely come up with a variant of the answer Obama had hinted at: that lapel flags no longer signify simple patriotism, but something that you don't want sticking to your fingers these days.

For these past six years and more, men with those bright little flags apparently riveted to their lapels have fed the voters a daily diet of fear, secrecy, lies and a cruel war with neither point nor end.

No sensible politician would want to march under this tiny, metallic banner. Just look at all the fallen stars who did.

Jerome Doolittle is a novelist, journalist and blogger, and a former speechwriter for President Jimmy Carter.