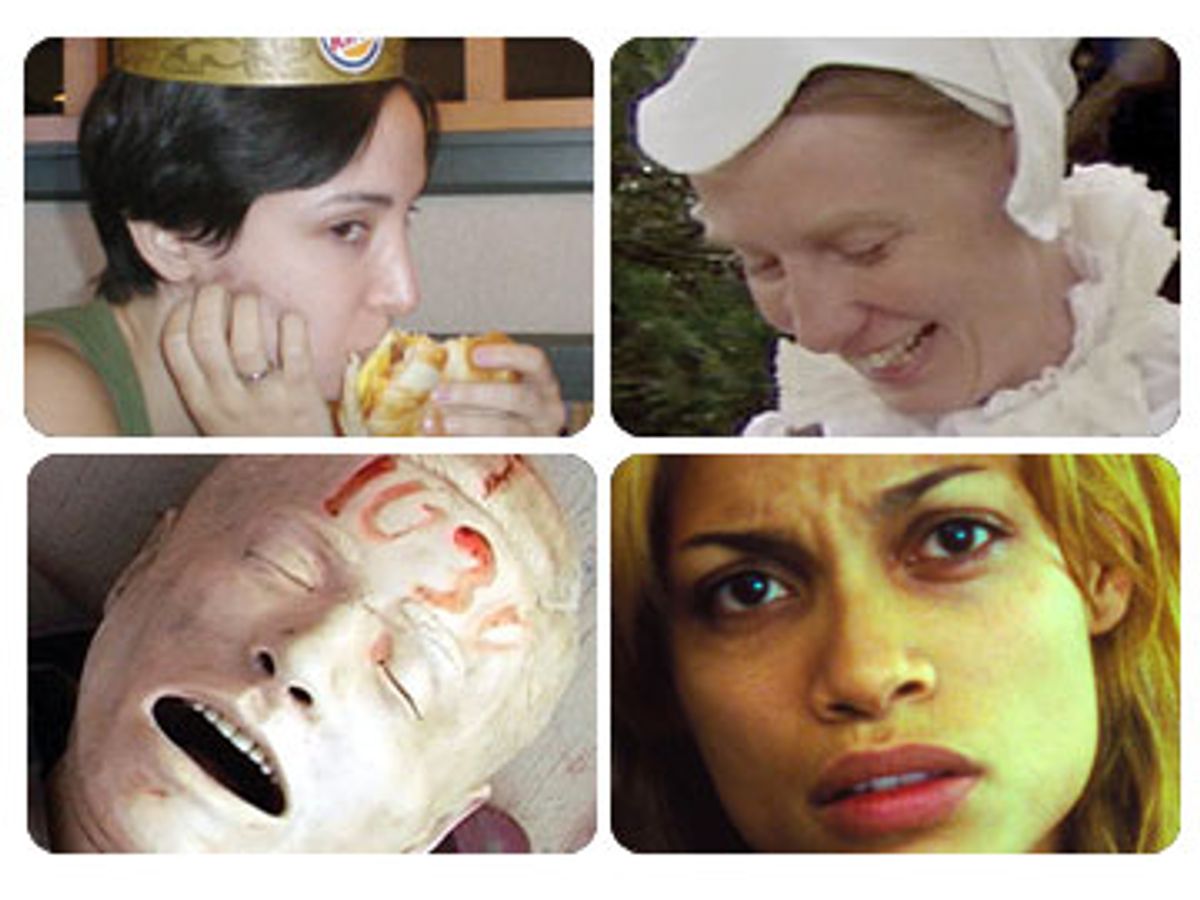 There's no point even bothering to attend the South by Southwest Film Festival if you're not open to discovering movies you haven't heard about -- and may never get the chance to see again. Sure, I was plenty glad to see "Harold & Kumar Escape From Guantánamo Bay" a month before the rest of the world, but that's not what I'm talking about. Despite the Indiewood premieres, the ever-larger hordes of attendees and the expanding media presence, SXSW still feels like a showcase (and trade show) aimed at people who love movies more than the movie business, and whose definition of "independent film" still includes some elements of anti-Hollywood subversion and rebellion.

While the spring weather in central Texas was a little disappointing this year (it finally cracked 70 degrees -- on the day I was heading back to New York), and I was so busy I never checked out Austinites' numerous barbecue recommendations, this was a terrific SXSW for unsung and off-the-radar motion pictures. Of course my list of 10 discoveries is entirely subjective, and it also has an element of randomness, because nobody can see everything at a fest of this size (in accordance with my usual festival tradition, I've got one movie on my list I didn't see). It's weighted in favor of documentaries, seven to three, which isn't a surprising ratio given the crapshoot nature of narrative features at SXSW (and most other festivals that aren't Cannes or Sundance).

Most of these 10 movies will be released someday, by somebody and in some form, and I'll do my level best to keep you up to date. (A couple already have distribution lined up, and I've noted that when I know about it.) In the meantime: Dude, it's all about interactivity! If any of these sound interesting, take a little consumer action. Seek out the Web site, write to the filmmakers, and try to get a film festival or independent exhibitor in your area interested. This was a big year at SXSW for documentaries about fan subcultures, and the surprising creativity and independence they have fostered. Maybe that's a template for the indie-film world. In the face of the six-headed Hollywood hydra, indie-film fans have to play a role alongside filmmakers in making sure that smaller, stranger pictures get seen by people who might actually like them.

"Explicit Ills" This gentle, lovely and consistently surprising survey of life in a Philadelphia inner-city neighborhood that's gradually succumbing to gentrification marks the writing and directing debut of 27-year-old actor Mark Webber (who does not appear in the film). Lustrously photographed by Patrice Lucien Cochet, "Explicit Ills" features an all-star roster of Webber's indie-actor peers, including Paul Dano as a hipster artist turned drug dealer, Rosario Dawson as a working-class mom, Lou Taylor Pucci as a semi-unemployed actor and Tariq Trotter as an African-American family man and entrepreneur. Webber wears his lefty politics on his sleeve, but the film's alchemical mixture of race, class, sex and money is far more sweet than bitter, and hardly ever preachifies. Besides, kid actor Francisco Burgos will break your heart.

"Full Battle Rattle" OK, I missed this documentary, which copped a special jury prize at SXSW, but by all accounts it's amazing. Directors Tony Gerber and Jesse Moss take us inside the $1 billion "virtual Iraq" built by the United States Army in California's Mojave Desert, where troops train for three weeks before deployment to the non-virtual Iraq. "Full Battle Rattle" follows a battalion that's trying to pacify the simulated town of Medina Wasl (populated with specially recruited Iraqi immigrants) and kill or contain insurgents (played by American soldiers). Scheduled for limited release this summer.

"Living With the Tudors" This dry, droll and slightly dark documentary from the inimitably strange pair of British artist-filmmakers Karen Guthrie and Nina Pope (known collectively as Somewhere) explores the world of Kentwell Hall in Suffolk, England, home to a large-scale 16th century "reenactment." Guthrie and Pope spent four years in the reenactment world and gained the trust of some of its hardcore loyalists, people like Sue, a one-time lawyer who has lost all desire to live in the outside world, and Tissy, once an airport security guard and now "lady of the manor" at Kentwell Hall. Alternately witty and sympathetic, "Living With the Tudors" moves beyond mere subculture anthropology into a kind of meditation on the desire, or need, we all sometimes feel to escape from our lives.

"Nerdcore Rising" Is this the year when Internet fanboy-geek culture (or choose your own insulting epithet) comes out of the shadows to reveal the full flower of its variety? Maybe so, but whatever about that. Negin Farsad's hilarious and delightful documentary "Nerdcore Rising" follows MC Frontalot, pioneer of the "nerdcore hiphop" movement, on his inaugural tour around the country. Frontalot is actually Damian Hess, a white guy in his 30s from Berkeley, Calif. (in other words, yo, he's my homey), a former Web designer who has turned his compulsive rhyming skills and avowedly mediocre rapping into an actual performing career, all without a major-label recording contract. Or any other kind. His music and reputation have spread entirely via the Internet, and let's just say his subject matter -- "Star Wars" conventions, Web-porn addiction, "Magic: The Gathering" and so forth -- is geared to a specific niche audience that's not quite the same as Snoop Dogg's. Funny, inspiring, authentic, sympathetic and never, ever mean. (Or at least not in a bad way.)

"Nights and Weekends" Click the title to read my review of this intimate, adventurous and awkward two-hander co-directed by "Hannah Takes the Stairs" auteur Joe Swanberg and co-star Greta Gerwig. Some will love it, some will hate it, but I see "Nights and Weekends" as a breakthrough, much more grown-up and sophisticated than the 20-something angst of "mumblecore" movies to date. IFC will distribute later in 2008.

"One Minute to Nine" With its gradual buildup and devastating last 20 minutes, Tommy Davis' documentary about Wendy Maldonado, a woman in rural Oregon who murdered her abusive husband, was the most powerful doc I saw at SXSW this year. Davis meets Maldonado about a week before she begins her prison sentence, and the movie takes its time getting to know her, filling in the back story of husband-from-hell Aaron and the couple's three sons through an assemblage of family photos and home videos. Furthermore, while you could read the Maldonado case as a Dreiserian American tragedy or a massive miscarriage of justice (and I vote for option B), Davis leaves the verdict up to you.

"Sex Positive" Maybe it took somebody with no investment in the sexual-culture wars of the 1980s, like 24-year-old filmmaker Daryl Wein, to rediscover a lightning-rod figure like safe-sex pioneer Richard Berkowitz and present him without prejudice. A one-time S/M hustler, Berkowitz and his friend Michael Callen, supported by controversial AIDS researcher Joseph Sonnabend, began urging gay men to avoid unprotected anal sex as early as 1982 -- and were treated as pariahs by the mainstream gay community. Berkowitz is a fascinating, prickly, decidedly unsaintly character, and Wein's film provides a fascinating and crucial slice of traumatic sexual history that's all but invisible to younger generations.

"Shot in Bombay" This fast-paced, immersive documentary from London-based American Liz Mermin (whose last film was the peculiar and compelling "Beauty Academy of Kabul") plunges you into the off-kilter chaos of Bollywood filmmaking, behind the scenes at an atrocious-looking action-adventure based on an infamous 1991 Mumbai shootout between cops and gangsters. The film's star, Sanjay Dutt -- a beloved Indian cinema icon run slightly to seed -- is himself under indictment on a weapons charge that's dragged through the courts for 13 years, and the crew spends more time with Dutt's double than with him in person. Mermin navigates between the film and the real-life crime story behind it, between Dutt's legal problems and his lengthy troubled-heartthrob career, with remarkable flexibility and sharp, dry humor. (Here's director Apoorva Lakhia, after every take, no matter how bad it is: "Cut! Mind-blowing! Let's move on!")

"We Are Wizards" I was fully expecting to find Josh Koury's documentary about the far reaches of Harry Potter fandom somewhere on the scale between mildly offputting and completely intolerable. Instead, it's a highly enjoyable illustration of how, even in the limited universe of pop culture, people create, refract and remix their own stories. Koury moves from the dueling pop-punk bands Harry and the Potters (good) and Draco and the Malfoys (evil, obviously enough) to teenage Potter Web-site entrepreneur Heather Lawver (who refused to bow before Warner Bros. and their attorneys, sparking a worldwide Potter-product boycott) to comic artist Brad Neely, whose "Wizard People, Dear Reader" offers an unauthorized, and inexpressibly strange, alternate soundtrack to the first "Harry Potter" film. I'm still not convinced that J.K. Rowling's books themselves are all that great. But in the face of this outburst of pluck, self-invention and unquenchable creativity, who really cares?

"Yeast" In truth, I almost walked out on "Yeast" after 20 minutes -- but in the end I'm grateful I stayed, pretty much. Director and star Mary Bronstein is married to Ronald Bronstein, whose movie "Frownland," a relentless, masterfully constructed study of an unbearable and profoundly damaged character, was among the 2007 discoveries at SXSW. "Yeast" isn't entirely the female-centric spawn of "Frownland" (in which Mary Bronstein played a supporting role), but there's a strong family relationship. Mary Bronstein plays a monstrous and manipulative young woman, simultaneously cruel and needy, who abuses and berates her roommate and her supposed best friend without mercy and then can't understand why they'll do anything to get away from her. After beginning in a deliberately disorienting hand-held style that may prove vomit-inducing to some viewers, "Yeast" gradually becomes more dispassionate and assured as it goes along. Like "Frownland," more an impressive and admirable film than an enjoyable one.

Oh, and let's hand out honorable mentions to Erik Nelson's Harlan Ellison biopic "Dreams With Sharp Teeth," which I covered yesterday, and Rachel Goslins' entertaining and provocative doc "'Bama Girl" (about an African-American homecoming-queen candidate at the University of Alabama), which just didn't quite fit.