Of war and cancer

Five years after Bush invaded Iraq, anti-Americanism has metastasized. But we can still beat it. 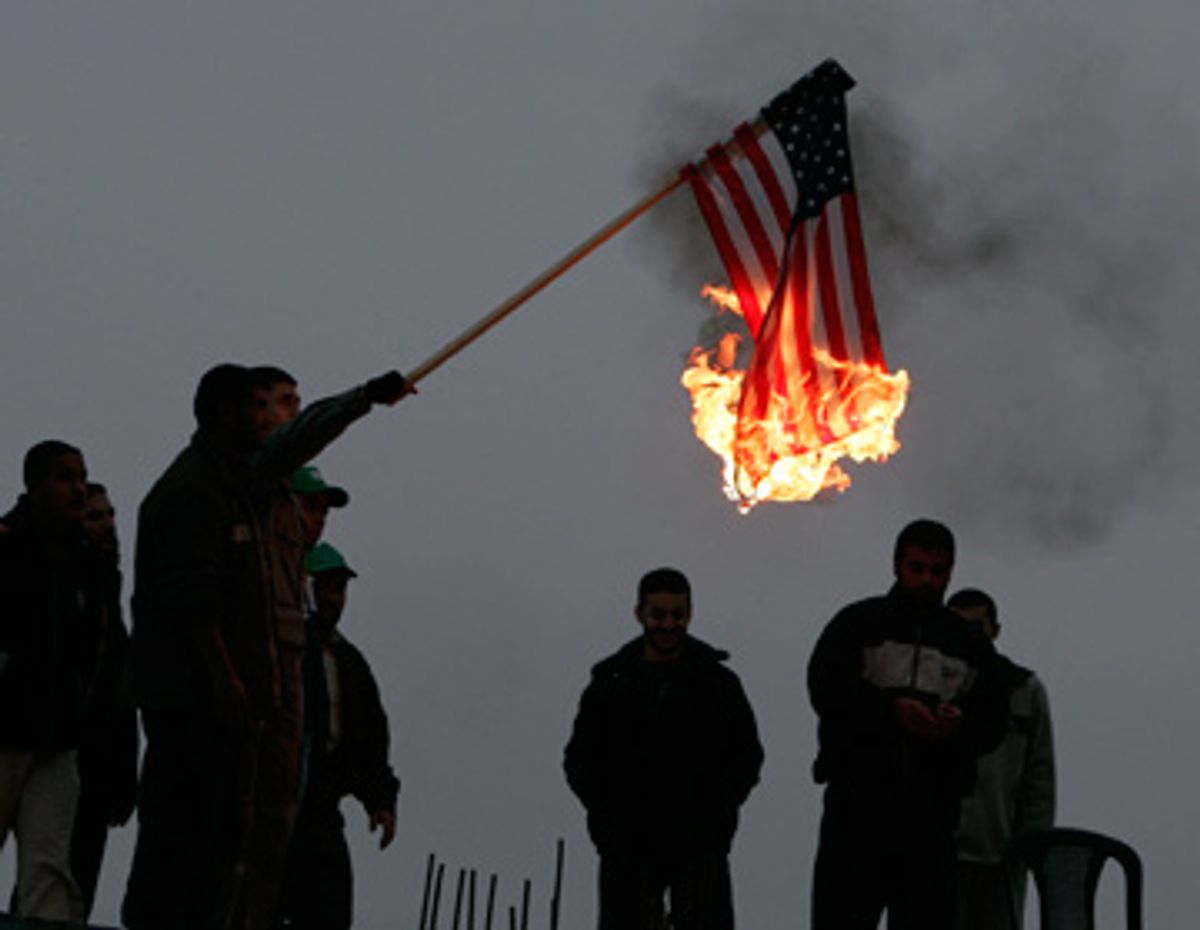 The Iraq war has been going on for five years now. Five years happens to be the length of time after which many cancers, if they have not recurred, are considered to be in permanent remission. As a cancer survivor, I remember those five years quite well. When they were over, I threw myself a little party -- kind of my "Mission Accomplished" moment.

I wish my country, and Iraq, and the Middle East, and the world, were in as good health as I am today.

Five years after George W. Bush decided to use America's "surgically precise" weaponry to operate on the entire Arab/Muslim world, the cancer of terrorism and anti-American hatred has metastasized. What was a Stage 1 disease, or 2 at worst, has turned into Stage 3 -- or maybe even Stage 4.

Bush's fatally flawed approach to "terror," treating it as a military problem that has nothing to do with U.S. policies, has led to more instability and violence, not less. As a new report from the Carnegie Endowment for International Peace notes, Bush's attempt to create a "new Middle East" by using force or the threat of force has backfired everywhere. Jihadist groups have multiplied. America's standing in the Arab/Muslim world is at an all-time low. Terror attacks are up everywhere -- in Iraq, in Afghanistan, in Europe, in Pakistan, in Indonesia. The Middle East is more volatile, divided and dangerous than ever. The crucial Israeli-Palestinian conflict, still the greatest cause of anti-Americanism in the region and one that Bush's neoconservative brain trust thought it could resolve in Israel's favor by smashing Iraq and putting a gun to the head of Iran and Syria, is at one of its most intractable points. Iran is in a vastly stronger strategic position. American allies like Saudi Arabia and Egypt remain stifled by corrupt and repressive regimes that are torn between their desire to placate Washington and their increasingly angry people. Lebanon is a powder keg. In Afghanistan, a resurgent Taliban threatens the Karzai regime's tenuous grasp on power, and America's NATO allies, scared off by the Iraq quagmire, refuse to commit troops. Pakistan's people have turned against Musharraf, the heavy-handed leader whom Bush has uncritically supported, leaving the U.S. no good options there.

Everywhere in the Arab/Muslim world, the truly good values America has to impart -- democracy, freedom, secularism, tolerance -- have been tainted by their association with Bush. It has become glaringly clear to people in the region that Bush's commitment to democracy depends on whether it results in the outcome he wants. For example, Bush and his supporters cheered loudly for Lebanon's "Cedar Revolution," when hundreds of thousands of Lebanese took to the streets to demand that Syria get out of Lebanon. But when the militant Shiite group Hezbollah turned out just as many Lebanese to denounce U.S. and Israeli meddling, the Bush administration's admiration for "people power" suddenly dried up. When the militant group Hamas won free and fair elections in the occupied territories, Bush's response was to connive with Mahmoud Abbas' Palestinian Authority to try to destroy it. When Bush realized that opening up Egypt's corrupt electoral system would empower the Muslim Brotherhood, he decided that the autocratic Hosni Mubarak wasn't so bad after all.

Unfortunately, this hypocrisy has weakened the most progressive players in the region, the Arab secularists and democrats who could lead the way to the internal reform their countries so desperately need. A despairing refrain among these embattled figures is, "Bush has given democracy a bad name."

And then there is Iraq. Forget the propaganda about the great success of the "surge." Bush's war turned it into a failed state, and although violence has subsided somewhat, it remains a horror show beyond belief. The brutal tyrant Saddam Hussein is gone, but hundreds of thousands of Iraqis, perhaps as many as a million, have died as a result of the war. More than 2 million people, of a population of 25 million, have fled the country. Basic services are abysmal: Iraqis, who must endure summer temperatures that are among the highest in the world, can expect only 10 hours of electricity a day. As the intrepid Patrick Cockburn reported for the Independent, Prime Minister Maliki cannot even venture half a mile outside the Green Zone to his Dawa Party headquarters without clearing the streets and flooding a neighborhood with heavily armed security personnel. A sectarian civil war of incredible brutality, one that misguided U.S. policies were largely responsible for, has scarred Iraqis' psyches to such a degree that no one can say whether reconciliation is still possible.

And just in case anyone has forgotten, Osama bin Laden is still at large.

If my surgeon had done his job the way Bush did his, he would have removed part of my liver -- a procedure justified, in the higher neocon quackdom, as "sending a message" to my other recalcitrant organs -- but left the Stage 3 tumor in my colon. And I would now be as dead as the almost 4,000 American troops whom Bush frivolously sent off to fight an unprovoked war.

Hard as it is to remember now, it didn't have to be this way. On this grim anniversary, as we face the daunting task of repairing what Bush has wrought, it's worth remembering that we could have taken a different road. After 9/11, the world was with America. People from Paris to Tehran poured into the streets to show human solidarity with the victims of the attacks. What if Bush had not made the bizarre decision to invade Iraq, an impoverished nation that was contained and posed no threat to America? What if he had instead made resolving the Israeli-Palestinian crisis, the real tumor in the Middle East, his top priority? What if he'd decided to work with our allies and negotiate with our enemies, instead of arrogantly trying to smash the world into submission?

Of course, there's no way to know exactly what would have happened. But America, and the world, would be in a far better place. If we had concentrated on catching bin Laden at Tora Bora, we could have dealt al-Qaida a fatal blow. If we had devoted some of the vast resources we've squandered in Iraq on Afghanistan, that miserable nation would be in a far more stable state. If we had dealt more evenhandedly with the Israeli- Palestinian issue, instead of always siding with Israel, that crucial conflict would be much closer to being resolved. If we had negotiated with Iran instead of threatening to attack it, the mullahs would be in a weaker position. And if we had never invaded Iraq, hundreds of thousands of Iraqis would still be alive today -- and jihadis around the world would be deprived of their biggest recruiting aid.

It is painful to contemplate what could have been. But it isn't a fruitless exercise. Because it isn't too late for America to change course. The cancer may have spread, but the patient is still alive.

I am optimistic enough to believe that the things that have made America a beacon of hope throughout the world haven't been completely destroyed, and that people everywhere are waiting for the real America to stand up again. The America whose farmboys and clerks and professors and waitresses defeated Hitler and Mussolini and Tojo, that rebuilt a world shattered by war. The America whose greatest leader, at the end of a terrible civil war, issued a mighty call for charity for all and malice toward none. The America whose vibrant democracy, friendly people, dynamic economy and jumping culture are still the marvel of the world. The melting pot America of whites and blacks and Latinos and Asians and every other race and ethnicity in the world, of Christians and Jews and Muslims and Hindus and Buddhists, of people from all walks of life from everywhere on this multitudinous planet. The pluralistic America that no more wants to impose a Pax Americana on the world than it wants to force all of its citizens to look, act or believe the same way. The America that is smart enough and compassionate enough to recognize when it has gone off course.

Bush was not the real America. He was a degraded offshoot who lacked the one indispensable American quality: common sense. He was devoid of the simple wisdom that comes from experience, the tough-minded ballast that Huckleberry Finn, that most acute observer of American character, called "sand." His swagger and John Wayne smirk were a pose, a pale imitation of genuine American courage.

But now Bush is leaving the stage, and it's time for the real America to shake him off and stand up.

First, we have to acknowledge that our unbalanced Middle Eastern policies, which long predate Bush, played a role in the 9/11 attacks. This notion is widely accepted by scholars and experts in the field. As the Carnegie Report notes, "Terrorism directed against the United States is not a phenomenon brought about by a blind and inexplicable hatred of the United States, but an unfortunate and certainly unacceptable response to the role the United States has played in the Middle East for decades."

Second, both justice and our national security require that we act to make fundamental changes in our Middle East policies. This means balancing our support for Israel's security with an understanding of the legitimate grievances of the Palestinians, and a real commitment to ending the 40-year-old Israeli occupation of their lands. It means dealing directly with Iran and Syria, both of which are capable of being rational actors. It means paying more than lip service to democracy, by accepting the results of elections even if we don't like them. It means bringing in the Arab/Muslim world, the U.N. and the international community to try to put Iraq back together again.

It won't be easy. The last five years of violent unilateralism and moral self-righteousness have not only spread the cancer of anti-Americanism throughout the world, they have demoralized and confused us at home.

But it isn't too late. It's been a bad five years, full of chemo and bad days and nausea, but we're still ticking. This is going to be a tough one to lick, but we've faced worse.

There's a slogan. Everyone who has faced down a deadly disease has probably mumbled some version of it to themselves some time or other, loudly or softly, with brass or in a prayer. It has been appropriated by someone for a completely different purpose, but he doesn't own it. And right now, as we prepare for a long, hard battle to bring back the country we thought we were and could still be, it feels like a banner to rally under.

No surrender. No defeat.