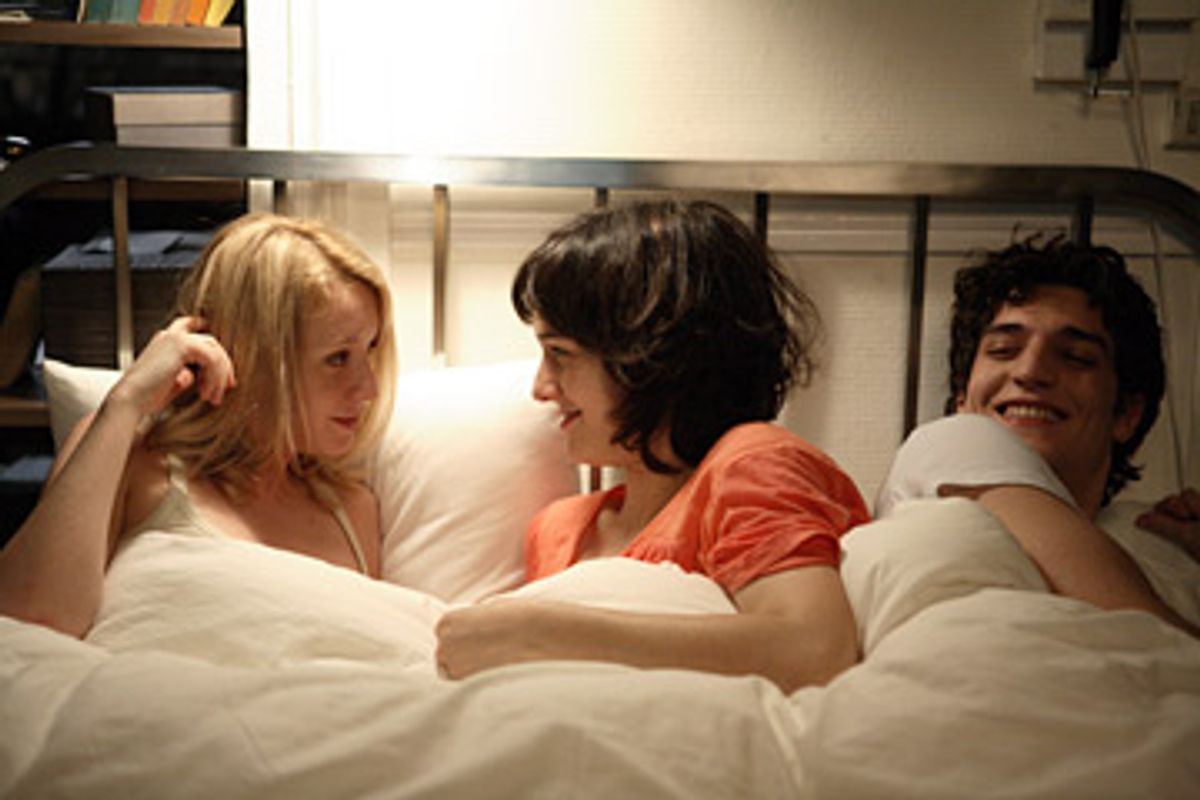 Ludivine Sagnier as Julie, Clotilde Hesme as Alice and Louis Garrel as Ismaël in "Love Songs."

Prowling the chilly, rain-swept streets of Paris like a disconsolate cat, pursued by at least four actual or potential lovers of various genders (one of them a ghost), Ismaël Benoliel, played by the startlingly handsome Louis Garrel, is a classic lonely hero of French cinema. To be specific, Ismaël belongs to the socially disconnected, emotionally damaged tradition of French New Wave protagonists. "Love Songs," the rapturous and compelling new film from 37-year-old writer-director Christophe Honoré that features Garrel amid a tremendous supporting cast, is part of an ongoing effort to reanimate the spirit of the New Wave in the context of a new century and a vastly different French society.

You could describe "Love Songs," in fact, as a blend of François Truffaut's wistful Parisian sentimentalism and Pedro Almodóvar's acrid polysexual comedy, which were never far apart to begin with (given the difference in climate and native temperament between France and Spain). But Honoré is also tapping into another French tradition, one he hinted at in his lovable and miscellaneous "Dans Paris," also starring Garrel. You see, "Love Songs" is a musical that blends young love, bedroom farce and tragedy in the bittersweet-chocolate vein of Jacques Demy's classic "Umbrellas of Cherbourg" (or, more precisely, in the vein of Olivier Ducastel and Jacques Martineau's underappreciated 1998 AIDS musical, "Jeanne and the Perfect Guy").

Built around 14 doleful, funny, dark, dance-floor-accented songs by French pop composer Alex Beaupain -- the movie was written to fit the songs, rather than the other way around -- "Love Songs" follows Ismaël's progress through a bumpy ménage à trois with blonde, high-strung Julie (Ludivine Sagnier of "Swimming Pool") and vivacious brunette Alice (Clotilde Hesme, who played alongside Garrel in "Regular Lovers"). As Alice sings to her two bedmates in one of Beaupain's best numbers, "Je suis le pont entre toi et toi", or "I am the bridge between you." It's clear that Ismaël and Julie are passionately in love but wrestling with the usual big questions about commitment and the future. Alice is an intriguing detour for both of them, and a mode of communication on the way to getting married or breaking up.

Honoré works fast and cheap on the margins of the French cinema mainstream; his four features so far haven't tackled hefty social issues like race or immigration, and with the exception of his 2004 incest drama "Ma Mère" they aren't sexually explicit. ("Love Songs" is remarkably chaste, given the subject matter: There's no on-screen nudity, let alone sex.) So he really hasn't been recognized at home as anything beyond a niche art-house director with a '60s obsession, and he has zero profile overseas. This inexpressibly tender and lovely picture suggests that he's developing into a major talent, one who can make the spirit of classic French movies come alive in a new world.

"Love Songs" opens March 21 at the IFC Center and Paris Theatre in New York, with other cities to follow. It will also be available on demand via IFC In Theaters on many cable-TV systems.