Republicans say that if Obama is the Democratic nominee they'll target his "inexperience" and "liberal" record. But that doesn't mean the dirty tricks aren't coming. 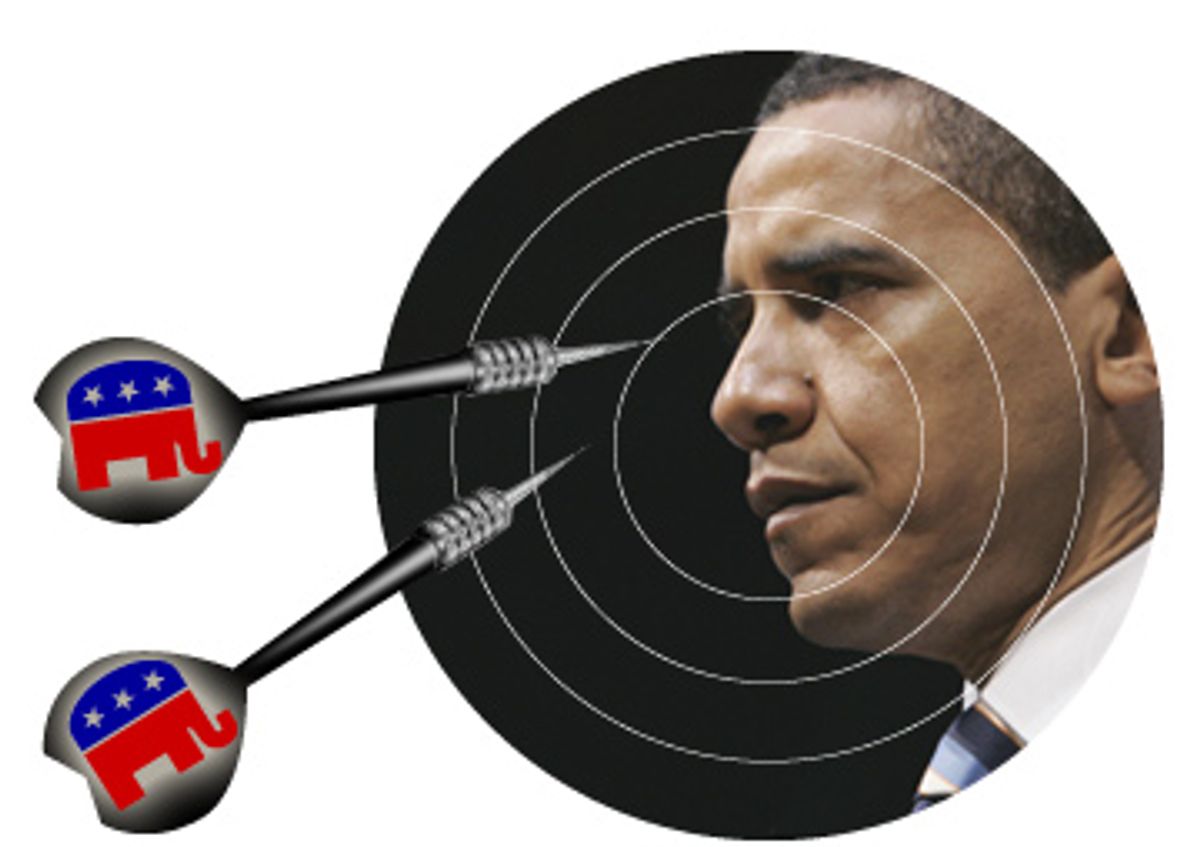 The Republican playbook for running against Barack Obama got a handy dry run this week. All of the outrage on right-wing talk radio, Fox News and conservative blogs over past incendiary comments from Obama's pastor, the Rev. Jeremiah Wright, fit perfectly into the plan the GOP and its allies are incubating for how to attack Obama if he wins the Democratic nomination for president. (The attack plan for demonizing Hillary Clinton, of course, is already well drawn, and many Republicans say they'd still rather face her.)

The emerging strategy -- at least according to leading Republican operatives who spoke on the record -- doesn't depend on reminding Americans of Obama's middle name, or on clumsy rhetoric from Clinton supporters such as Geraldine Ferraro who have helped to make race a divisive issue. Republicans say they'll try, first and foremost, to paint Obama as dangerously inexperienced -- a characterization of him that Clinton's own polling has found to resonate with many voters, and an attack that Clinton has already been using. Republicans say they'll also portray Obama as unacceptably liberal, using his record as a state and U.S. senator.

But there can be little doubt party operatives will also pick up on -- and let the Republican noise machine make controversies out of -- things like Wright's comments, which can raise uncomfortable questions about race or patriotism in voters' minds. Judging by past campaigns, the party will look for ways to benefit from the dirty work of unaffiliated operators while keeping its hands officially clean of it.

John McCain's campaign, officially, is aiming for the high ground. Aides sent around a memo last week warning Republicans away from "overheated rhetoric and personal attacks," both because McCain says he wants to run a respectful campaign and because those tactics "distract from the big differences between John McCain's vision for the future of our nation and the Democrats'.

Of course, McCain's position doesn't mean that surrogates like radio host Bill Cunningham (whom McCain condemned for playing up Obama's middle name at a campaign event) or Rep. Steve King (who said terrorists would be "dancing in the streets" if Obama won) won't proceed in that fashion anyway. In the 2004 election, more than anything that the Bush campaign put on the air, the ads that did the most lasting damage to John Kerry were the Swift Boat Veterans for Truth commercials, which Bush's official campaign had no connection with. There's nothing to stop a similar assault this year.

"Would we be able to restrain them? No," Sen. McCain told Salon last week in an interview. "I'm sure there would be Republicans that, if they were running attack ads against either Senator Obama or Senator Clinton, they would say, 'I don't care what McCain says, I'm an independent outfit.'"

Some Republican operatives say trying to push the idea that Obama is secretly Muslim (or otherwise playing up his foreign-sounding name) isn't just blatantly unfair, it's also ineffective. The party's polling and focus groups show that many voters see those attacks as out of bounds, and they wind up sympathizing with Obama because of them.

"We have to be really careful in terms of -- we as Republicans across the board -- bringing up issues that are fair game," said Colorado Republican Party chairman Dick Wadhams, one of the GOP's most aggressive strategists when it comes to turning voters against Democratic candidates. "All this other stuff, I do not think is appropriate, and I think it ultimately would backfire," he said. Wadhams ran Sen. John Thune's winning, cutthroat campaign against Tom Daschle in 2004, although he was forced to retreat from the GOP forefront when George Allen, a senatorial candidate Wadhams worked for in 2006, turned out to have some serious problems with racial issues.

What is fair game in the eyes of Wadhams, the Republican National Committee and McCain's own advisors, however, is asking whether Obama has the experience necessary to be president. The GOP will hammer away at Obama for his short tenure in the Senate, reminding voters that only four years ago he was in the Illinois Legislature while McCain was in his 21st year in Congress. The fact that Clinton managed to revive her campaign with a similar attack ahead of the Ohio and Texas primaries only proved to Republicans that it works.

Obama cruised through his 2004 Senate campaign without serious opposition in the general election, and Republicans say they don't think he has proved he can stand up to close scrutiny. "I don't care how big his rallies are and how eloquent and how hip he is, at some point he's going to have to go through the grinder, and I don't think anybody has any idea that he can do it," said Mark Salter, a close McCain advisor. Republican strategists think voters don't yet have a clear image in their minds of who Obama is -- and they're eager to help draw the picture for them. Only 19 percent of voters the RNC polled in January said they were "very familiar" with Obama's positions on issues.

"He does very well in an auditorium with 15,000 screaming liberal sycophants," Wadhams declared, "but whenever he's interviewed on a tough subject or following a defeat by Senator Clinton in some primary or caucus, I don't think he does very well."

Those "liberal sycophants" are another key part of the Republican plan.

For example, the American public will hear a lot about how National Journal ranked Obama the most liberal member of the Senate in its annual survey published this year, an assessment of voting records that is hard to refute without sounding wonky. Obama's Illinois Senate record might draw even more fire. The Barack Obama depicted in the Republican playbook voted for tax hike after tax hike, was staunchly pro-choice on abortion (even on votes that seem to have been engineered by the opposition to be politically damaging), didn't take a position on votes to toughen drug penalties and pushed to require undocumented immigrants to get driver's licenses.

That Barack Obama barely registers in the public consciousness now -- Clinton can't use those issues against him in the primaries because many Democrats might not object to them. But GOP strategists can't wait to tell all the independents and Republicans who have been voting for Obama this year how he is, well, basically another John Kerry. Or maybe Michael Dukakis. Take your pick.

"He's tried to give voters the impression that he transcends partisan politics, but his record is extremely liberal and overtly partisan," said Alex Conant, an RNC spokesman. "I think when you talk about wanting to reject old politics, [Obama's record] is the definition of old politics." For a candidate whose message is about moving the country past divisive political battles, that could be an effective line of attack. Even more than depicting him as a true liberal, Republicans want to turn Obama into just another politician, to blunt his charisma and post-partisan appeal.

Republicans' best chance to counter Obama's appeal to voters may come when gifts like Wright's incendiary rhetoric surface. Following a report on "Good Morning America" about Wright's past sermons, the reverend's comments became a fixture on Rush Limbaugh's show and on "Hannity & Colmes." Polling already shows Wright's most inflammatory remarks offend a lot of voters. Just imagine if Wright showed up again in an ad on television in October. "Those film clips are pretty devastating," Wadhams said with some relish. And Limbaugh, naturally, has already gone ballistic. "No country wants a president who is a member of a church with this kind of radicalism as its mainstream," he fumed on Monday.

Obama acknowledged, again, in his speech on race on Tuesday how close the two men have been for two decades; there's no question that Wright has been influential enough in Obama's life to merit some scrutiny. And talking about Wright means Republicans don't have to talk about race directly. Instead, they can just remind voters -- over and over again -- that Obama's minister sometimes strays onto radical rhetorical ground. If doing that makes people less comfortable with electing the first black president, so be it.

"Instead of distancing himself and moving past this moment, he sort of owns it now," Republican strategist Kevin Madden argued after Obama's speech. (Madden worked for Mitt Romney's campaign, which went through equally thorny contortions over religion.) "Barack Obama, before all this, was at a point where his appeal transcended race. He was somebody that voters -- white and black both -- looked at as a candidate not viewed through the prism of white or black. [Now] he has become that."

These kinds of attacks might be even more pernicious than obvious lies about Obama's religious background, which made their way around the country by e-mail last year (naturally, without a named source). But unlike refuting the charges in those e-mails that he attended madrassas as a child, Obama can't just shrug off the more sophisticated tactics as false.

Instead, he has to get voters to move past them -- a problem Obama has recognized. "We can play Reverend Wright's sermons on every channel, every day, and talk about them from now until the election, and make the only question in this campaign whether or not the American people think that I somehow believe or sympathize with his most offensive words," he said Tuesday. "We can do that. But if we do, I can tell you that in the next election, we'll be talking about some other distraction. And then another one. And then another one. And nothing will change."

But it's one thing to know what's coming and to condemn it. It's another to beat it back. Hillary Clinton has insisted all through the campaign that her own battles with the GOP in the 1990s taught her how to survive -- even thrive on -- nasty attacks. For Obama to secure the Democratic nomination, he may have to persuade party insiders that he can do the same thing.