The '08 race has revealed the weird science of the Democratic primary system -- and the true problem with the long Obama-Clinton battle. 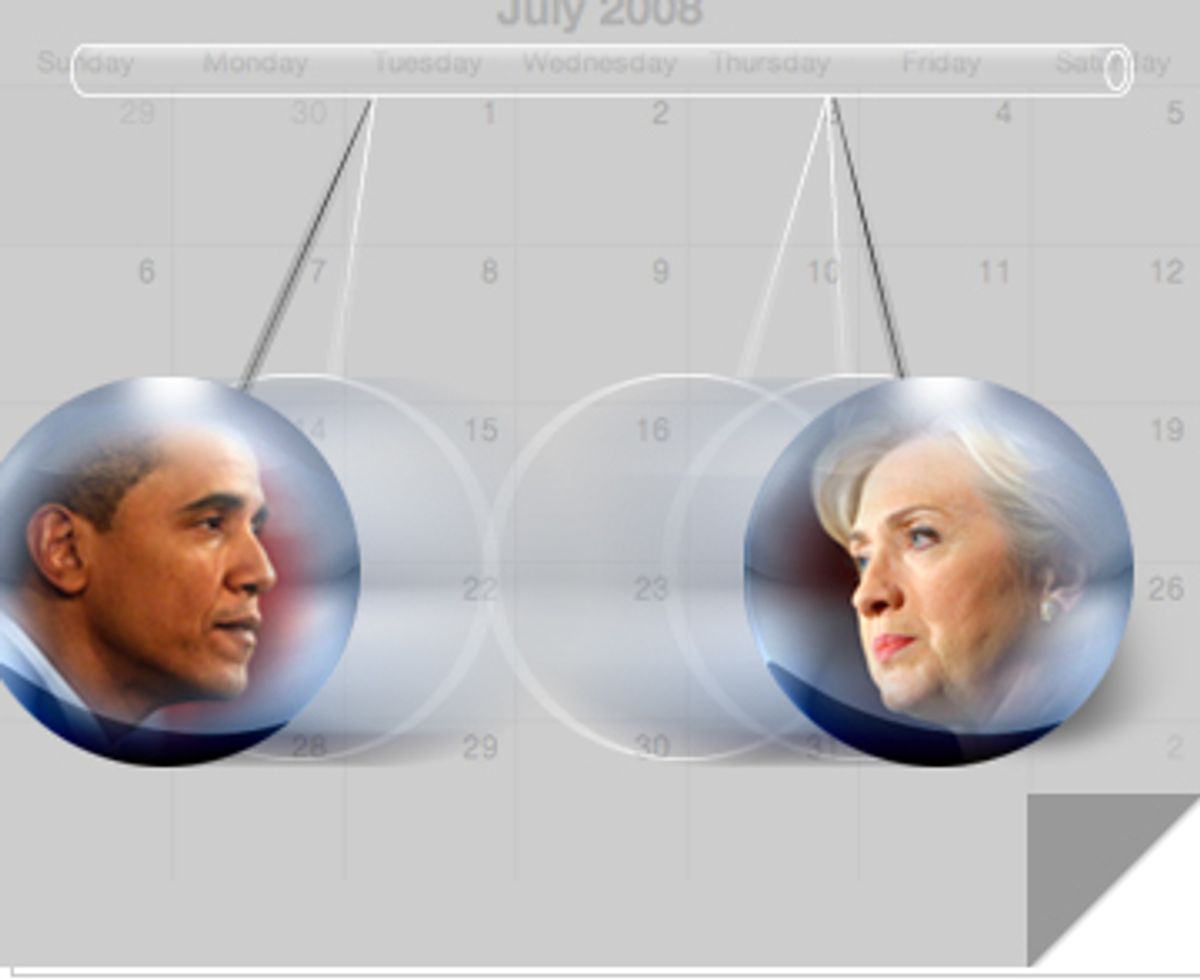 Forget buyer's remorse -- the real malady likely to be triggered by the never-ending Democratic presidential race is buyer's confusion. It has already been seven weeks since a majority of Democrats cast their votes in the Woozy Tuesday Feb. 5 primaries, and even longer in fast-forward states like Iowa and New Hampshire. Those voters picked their candidates back in the innocent days when Bear Stearns was regarded as a pillar of Wall Street and Eliot Spitzer a pillar of rectitude.

Sixteen years ago, the last time the Democrats won back the White House, fewer than half the delegates had been selected by the end of March, with big-state primaries in New York, Pennsylvania, Ohio and California still on the docket. This campaign year the Democrats are already down to seeds and stems with 82 percent of the delegates having been chosen by March 11. This simple arithmetical fact -- combined with the scheduling of the 2008 Democratic Convention six weeks later than in 1992 -- is what gives such an air of unreality to the final installments of the Barack Obama-Hillary Clinton soap opera.

With the chances to rerun the outlaw Michigan and Florida primaries now at the vanishing point, it may be time to inquire about a do-over for the rest of America. This is not an argument for Clinton, who otherwise probably has too far to go and too few remaining primaries to get there. But after a week punctuated by Obama's right-stuff response to wrong-way Rev. Jeremiah Wright and Clinton's document dump of today-tea-was-served White House schedules, Democrats are being barraged with new information about the candidates long after most of them have made a binding decision on a nominee. It is akin to being given a subscription to Consumer Reports the day after you bought a new car.

The marketing of the Democratic race is made to order for this era of narrow-casting and the long tail on the bell curve. Unless you live in one of the eight states left to vote (Pennsylvania, North Carolina, West Virginia, Kentucky, Indiana, South Dakota, Montana and Oregon) or are among the more than 300 or so undeclared superdelegates, your views no longer matter.

As a result, Bill Richardson's endorsement of Obama on Friday was not really designed to sway voters. In the hollers of West Virginia, the Hatfields and the McCoys had not been asking each other, "I wonder which way Richardson is going to jump." What Richardson's blessing signified was that an ambitious politician with close ties to Bill Clinton (they watched the Super Bowl together) decided that his self-interest would be enhanced by choosing Obama rather than Hillary. Small wonder that the Obama campaign chortled in a press release that since the Feb. 5 primaries, 62 superdelegates have endorsed their candidate while only two have opted for Clinton.

With little room to maneuver, the Clinton campaign is gamely trying to use the polls to argue that the former first lady is more electable than a first-term senator from Illinois. As Mark Penn, Clinton's pollster and chief strategist, argued in a memo to the press last Thursday, "The more that voters learn about Barack Obama, the more his ability to beat John McCain is declining compared to Hillary." By cherry-picking state polls and probably exaggerating the lasting significance of Obama's shaky past few weeks, Penn offers a blizzard of statistics to ice his preordained conclusion.

But claims like these are dubious nearly eight months before the November election -- no matter which candidate is making them. Mark Mellman, who was John Kerry's 2004 polllster but is neutral in the current presidential race, said, "A lot of things can happen between March and November. My own view is that either one of them would win in November because the fundamentals favor the Democrats. But you have no real way of knowing who would be stronger against McCain." Mellman dismisses the far-in-advance horse-race polls that purport to measure how Obama and Clinton would perform against the Republican nominee: "People are very mediocre predictors of their own future behavior."

Pollster Andy Kohut, the president of the nonpartisan Pew Research Center, is skeptical of claims that a slight downturn in Obama's national poll numbers reflects the onset of buyer's remorse. "I don't see any signs of it," Kohut said. He pointed to a CBS News Poll released last week that showed no significant change from February in the number of Democratic primary voters who would be "somewhat" or "very dissatisfied" if Obama won the nomination. "The way this ends, and to what extent it ends in what is seen as a fair way, will affect the way the Democratic voters look at these candidates," Kohut said. "That will help determine how much buyer's remorse -- or perhaps the reverse of it -- sets in following the end of the nominating-race season."

There is always an inherent risk when a presidential candidate tries to premise claims to the nomination on poll numbers. Back in 1968, Nelson Rockefeller, trailing badly in the Republican delegate race, loudly argued all the way to the Miami Convention that the national polls proved that he would be a better GOP candidate than Richard Nixon. That desperation gambit ended abruptly when the final Gallup Poll before the Republican balloting showed Nixon scoring better than Rockefeller in trial heats against Democrat Hubert Humphrey.

But it is also shaky to argue -- as many Obama partisans do passionately -- that the pledged delegate totals from the primaries and caucuses should override any independent decision making on the part of the 796 automatic superdelegates (mostly members of Congress and the Democratic National Committee) who will ultimately provide the winning candidate with the margin of victory. Most Democratic voters will have chosen between Clinton and Obama back in February -- and they could have changed their minds along the way. These votes were a valid expression of sentiment when they were cast, but they lose their potency as an expression of the pure popular will as they age. The gap between Super Tuesday and the Democratic convention (more than 200 days) is roughly double the time between the November election and the presidential inauguration. If the convention were really designed to be a rubber stamp of the primaries, why not vote right before the delegates arrive in Denver? What was the reason for such early voting? All the Democrats had a plane to catch?

In truth, there is little that is small-d democratic about the way that the Democratic Party chooses its nominee. In some states only registered Democrats can participate; in others, the party's primaries are open to all voters regardless of ideology, so even Rush Limbaugh's dittoheads could have their say. And which matters more in choosing a nominee, the Texas primary or the late-night Texas caucuses that were a cacophony of chaos?

Had Michigan and Florida worked hard and played by the (Democratic Party's) rules, it is likely that Hillary Clinton would be a lot closer to parity with Obama had these rogue states held valid primaries. This is not to argue (as the Clinton campaign has done with more loudness than logic) that the results of these outlaw January contests should be honored. Rather, Michigan and Florida serve as reminders of the built-in flaws in the Democrats' botched version of Decision 2008.

Politics is purported to be the art of the possible. But the only possible way of achieving clarity in this Democratic race for president is a clear-cut verdict from the final burst of primaries. If Obama holds his own in states like Indiana and North Carolina (both May 6), the race would be all but officially over. If Clinton, on the other hand, sweeps Pennsylvania (April 22) and follows up with solid victories on May 6, then the rush to judgment becomes a tiptoe on cat feet.

With more than five months to the Denver Convention, the problem for the Democrats remains the crazy-quilt schedule that caused far too many to vote too soon. That is the real buyer's remorse -- a front-loaded political calendar that has turned most partisan Democrats into now-irrelevant bystanders just when a real decision is needed.