If Clinton beats the odds and wins the Democratic nomination, Republicans will say she stole it. And then they'll try to give voters a 1990s flashback. 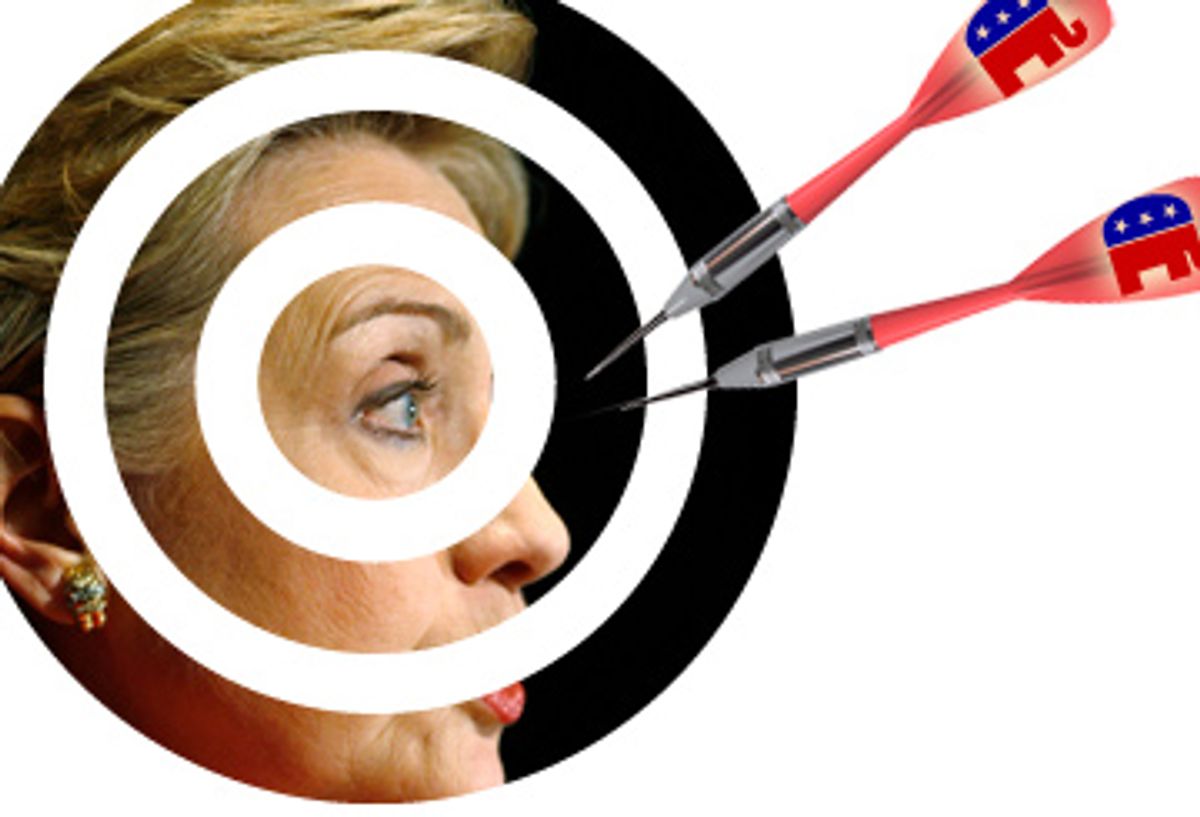 There was a time when simply hearing the phrase "Hillary Clinton" was enough to drive conservative Republicans more than a little mad. Think of former GOP Rep. Dan Burton of Indiana, shooting pumpkins in his backyard to prove Vince Foster was murdered by White House hit men. Or the $50 million Whitewater investigation, which dragged the country through six years of political turmoil but never produced enough evidence to file criminal charges. Or former Sen. Trent Lott, musing publicly that "maybe lightning will strike" Clinton before she could be sworn in to the Senate in 2001.

Of course, these days, with the delegate math in the Democratic presidential race tilted heavily in Barack Obama's favor, Clinton has drifted out of the GOP cross hairs. Republicans are digging deep into Obama's past now, ready to chip away at any warm feelings about him voters may still retain after a bruising primary. But a Clinton nomination, while a long shot, is still a possibility, and it wouldn't necessarily disappoint the people the woman herself dubbed, 10 years ago, the "vast right-wing conspiracy." The script for a John McCain-Hillary Clinton race is already written. The Republicans have been reading from it for more than a decade. All it would require for the 2008 contest is a little updating. Hint: They may never have to utter the word "Whitewater."

Republicans look at Obama and see someone who would be open to attacks because voters don't know him well enough. So do Clinton aides, who repeat over and over again on their daily press conference calls that Obama hasn't been vetted the way she has. But even in politics, there is such a thing as overexposure. Clinton may have precisely the opposite problem that Obama has.

"Hillary's very polarizing," one Republican consultant said. "There's no middle ground there." For 16 years, Clinton has been at the dead center of some of the country's most strident political battles, and most people seem to either love her or hate her. Stretching back a decade, her favorable ratings among voters nationwide have wobbled between the high 40s and the high 50s, while her unfavorable rating has hovered in the 40s since 2000. Republicans don't have much distance to cover to push that unfavorable figure above 50. Asked where Clinton might be vulnerable in the general election, GOP pollster Glen Bolger joked, "With voters."

Though many Democrats like and respect Clinton as a role model, an effective legislator and a fighter against a relentless GOP onslaught, the image Republicans would want in voters' minds this fall if she wins the nomination is far more sinister. They'll say Clinton will do or say anything to win, and that she can't be trusted (also, she'll raise your taxes). McCain's campaign will call her a liberal and paint her support for ending the war in Iraq as a surrender to terrorists (the same strategy they'd use against Obama). Clinton's problem is that many voters already see her in a negative light; there isn't much work Republicans would have to do to put her there.

Ironically, that might make Clinton immune to dirty tricks like the ones the Swift Boat Veterans for Truth pulled on John Kerry (or like the mud the GOP is already planning to throw about Obama's minister, the Rev. Jeremiah Wright). This is, after all, a candidate whose billing records as a private lawyer in Arkansas in the 1980s, the infamous lost-and-then-found Rose records, were subpoenaed, examined and even dusted for fingerprints by Republican investigators in Congress over a decade ago. When Clinton ran for reelection to her Senate seat two years ago, even the sleaziest GOP operatives basically left her alone, allowing her to cruise to victory without coming under heavy fire. But there isn't much out there voters haven't already heard about Clinton, or her husband; why bother trying to fight the battles over the White House travel office again?

In fact, even some of the GOP's longtime professional Clinton-haters say they wouldn't advise that. For one thing, those old scandals seem sort of dated. "Every time I read something where people bring something up [from the 1990s], I say, 'I'd forgotten that,'" said former Mitt Romney campaign consultant Barbara Comstock, who investigated both Clintons zealously in the 1990s while working for Dan Burton's House committee. "I did it and I forgot it." For another, Bill Clinton left the White House with his popularity intact, even after his antagonists tried -- and failed, resoundingly -- to remove him from office.

But just because the Republican National Committee wouldn't commission an ad about the drama of the Clinton years, that doesn't mean voters aren't already thinking about it anyway. Both Clintons are so well defined, after so many years in the spotlight, that attacks based on more current affairs can slip right into the image voters already have of them. So this week's mini-scandal, about whether Clinton did or didn't land under sniper fire at an airport in Bosnia 12 years ago, becomes just another episode where the truth doesn't quite match up with what voters are hearing from the candidate. Polls already show less than 50 percent of the electorate thinks Clinton is "honest and trustworthy." As Comstock put it, "You don't want to be adding more bullet points to the definition of 'Clintonian.'"

GOP polls and focus groups show "Clinton fatigue" is still a problem, especially among independents and moderate Republicans who might be willing to vote Democratic. "Even if they don't dislike her strongly, they're a little ... kind of wary of the Clintons, and they're looking for some sort of change," Bolger said. McCain, who's been in national politics for 25 years himself, might have trouble accusing Clinton of hanging around too long. As with Obama, McCain says he'd try to run a respectful campaign against Clinton. But he doesn't have to go negative to remind voters that they've already been through eight years of a Clinton administration. And there are plenty of people out there who don't necessarily want another one. Having the former president hanging around the edge of the campaign might not help. "You don't have to do anything with it -- it's just there in your face all the time," Comstock said. She then brought up the debacle of "Hillarycare"; the candidate's prime policy initiative while first lady was a failure. "The 'buy one, get one free' didn't work for them [back then], and it's not quite working for them this year, either."

The other line of attack Clinton faces if she does wrest the nomination from Obama is over how she does it. Colorado GOP chairman Dick Wadhams called it "stealing" the nomination, and he'd be happy to tell voters all about the process that put Clinton over the top. "If she wins, it's because these non-elected delegates are going to be countering what happened in primaries and caucuses around the nation," he said. "I think that would be very divisive for them." Other Republicans say polls show independents don't like the thought of superdelegates picking a nominee who trailed in the elected delegate count. "The party that created the whole open primary system and ended the deals behind closed doors and smoke-filled rooms is the one that's kind of relying on that after all," Bolger said.

And just as attacks about misrepresentations in her primary campaign remind voters -- subconsciously, without anyone having to draw an explicit line -- about previous allegations of Clinton lies, the picture of Clinton emerging from a disputed Democratic convention as the nominee thanks to a handful of party insiders would play into old images of a power-hungry couple, too. "It's just the Clintons being the Clintons," Comstock said. "The '90s were good for the Clintons, but they weren't good for Democrats. They survived personally, but everywhere else Republicans prevailed." That overstates the case a little -- Democrats gained ground in the 1998 midterms, after Republicans impeached Clinton. But that won't stop the GOP from accusing Clinton of cheating to get the nomination if she does.

Still, there is always the danger that Republicans will overreach if a Clinton is involved. (Take Citizens United Not Timid, an anti-Clinton group organized by longtime GOP sleazeball Roger Stone, which appears to have no purpose beyond selling T-shirts with its offensive acronym.) Conservatives have never been able to show much restraint in attacking either one of them, no matter how counterproductive it gets. There's little reason to think they've learned their lesson. If Clinton does pull off yet another family comeback, in a political career already dotted with them, her message to Republicans may well be (to quote a figure from a different political dynasty), "Bring it on."