On a bus tour through Pennsylvania, Obama tries to impress blue-collar white voters. He'll need them to keep the state close in April -- or to win it in November. 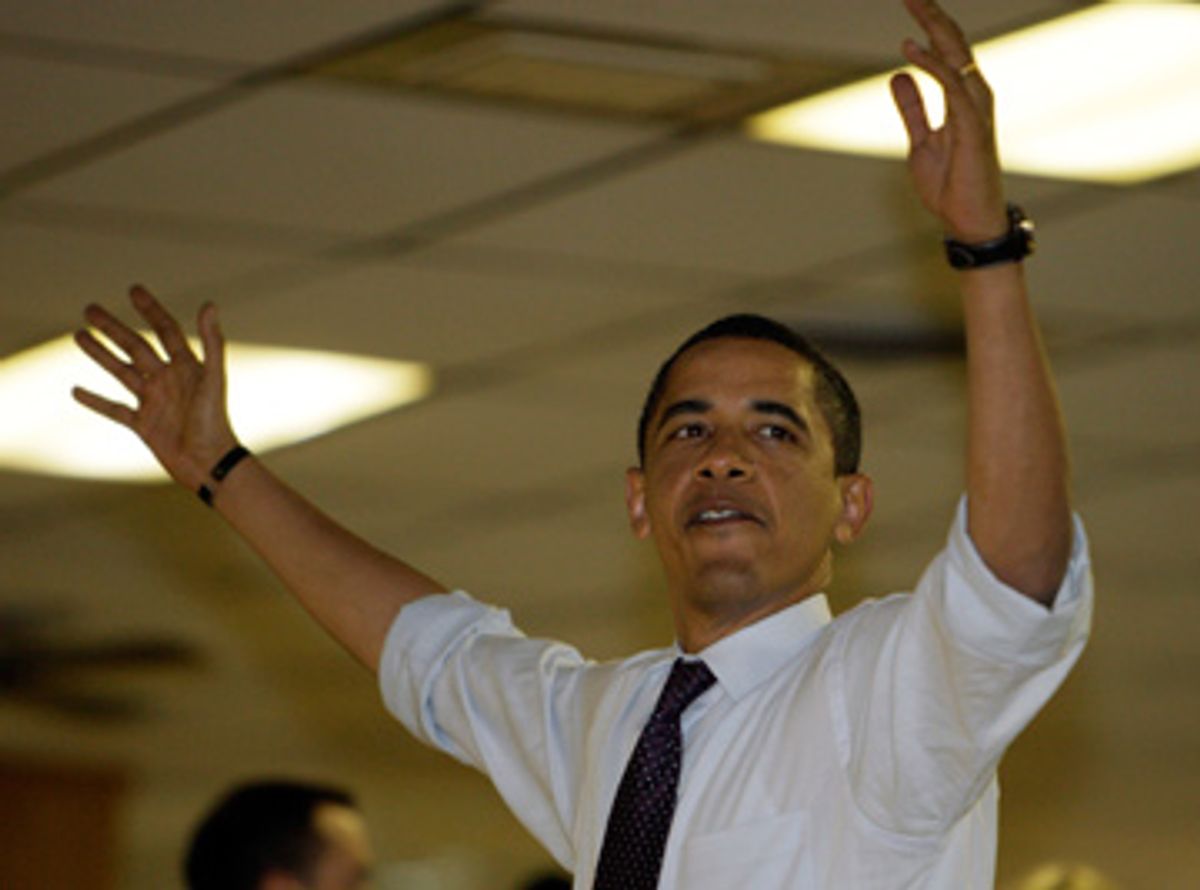 His sleeves rolled up but his tie still firmly knotted, Barack Obama picked up a shiny black bowling ball, strode confidently toward the lane and promptly hurled the ball straight into the right gutter. His second try missed right, too. It wasn't exactly a promising start to his first bowling trip in 30 years, on a campaign stop Saturday night. "Let me tell you something," he said, turning to the crowd of patrons -- and, he surely hoped, voters in next month's Democratic primary. "My economic plan is better than my bowling." "It has to be," a man standing nearby shot back.

But by the time Obama and Pennsylvania Sen. Bob Casey Jr. -- his newest, and most heavily trumpeted, supporter in the Keystone State -- had finished seven frames at Pleasant Valley Bowl, the Illinois Democrat's game had slowly, but steadily, improved. He kept his shots in the middle of the lane, though he rolled them without quite enough force to knock down all 10 pins at once. So what if Casey (who also hadn't bowled in years) wound up beating him? When Obama finally cleaned up a spare, he declared victory, changed out of his Velcro bowling shoes and hopped back on the bus that will carry him through Pennsylvania's small cities and towns until Wednesday.

"He has potential," said Roxanne Hart, 43, an Altoona resident who had invited Obama and Casey to join her lane. She was talking about his bowling; she had already decided what she thought of his politics. "I think he'd be a wonderful president."

Trailing Hillary Clinton by double digits in the latest Pennsylvania polls, Obama is just now embarking on a push to close the gap before the April 22 primary. On Friday, he launched a bus tour in Pittsburgh that will wind up in Philadelphia Wednesday -- with plenty of time in the vast parts of the state that Clinton advisor James Carville once famously declared "Alabama in between." If he struggles as much dealing with blue-collar voters here as he did with bowling, he could be in some trouble.

Heavy black turnout in the big cities could help Obama, but to pull off a surprise win, he'll need to hold his own in places like Altoona, where many voters are the working-class white Catholics who have remained fiercely loyal to Clinton throughout the primary season. Not coincidentally, that's also the strategy Obama (or Clinton) would need to beat John McCain in Pennsylvania in November. Even if he doesn't win the primary, Obama hopes to prove to Democratic superdelegates -- the one audience that's even more powerful than undecided voters in Pennsylvania and the other nine jurisdictions left to hold elections -- that he could keep the Keystone State blue in the fall, which either Democrat will have to do to win the White House.

So Obama is trading the raucous urban and campus rallies that have defined his campaign up to now for Q-and-A sessions in small-town high school gyms, interspersed with visits to steel mills, bowling allies, hot dog shops and dairy farms. (Well, mostly trading them -- a huge gathering at Penn State University Sunday, the only one of its kind planned for the bus trip, drew an estimated 22,000 "screaming liberal sycophants," as one prominent Republican has dubbed Obama crowds.) He's playing up his opposition to Washington lobbyists, saying the game wouldn't be so stacked against the people he's talking to if the rules were different, and painting Clinton as the candidate of the status quo. A new ad on Pennsylvania TV rails against gas prices, and his speeches call for bringing "more fairness" to the economy. And he's rolling around the state with ex-Pittsburgh Steelers like Jerome Bettis and Franco Harris, who are far more popular among key constituencies than any politician could dream of being.

Given enough time, his aides think, voters here will warm up to Obama. Look at Iowa, they say, where familiarity (and field organizing) persuaded an all-but-lily-white state to give Obama the campaign's first prize. Ohio, in the Obama campaign's narrative, doesn't prove much, even with demographics almost identical to those of western Pennsylvania, because he had to split time there with Texas in the two-week run-up to those primaries. "You know, we were having these huge rallies and it's just hard to get questions and have a lot of interaction," Obama said Saturday. "When we were having [a primary] a week ... you couldn't really take time for the retail politics that I enjoy and think helps people know me better. We can take a little more leisurely pace when we have six weeks to campaign in the state."

But will blue-collar workers really buy it? This is a candidate who went to a ritzy private high school in Hawaii before going on to Columbia University and Harvard Law School. Before he got to the Senate, he taught constitutional law at the University of Chicago. Meanwhile, he spent Friday night and Saturday morning in Johnstown, Pa., where only 8 percent of adults have a bachelor's degree. Obama carries himself with a hip, ironic kind of coolness, but it's not clear whether that will play as well in steel towns as it does in college towns. His style isn't quite your father's populism; more to the point, it's not Bob Casey's father's populism, either. (Watching NCAA basketball at a Johnstown sports bar Friday night, Obama was careful to make sure the Yuengling he was drinking wasn't "some designer beer," coining a new phrase in his eagerness to avoid elitism, and betraying his ignorance of cheap, tasty Pennsylvania lagers to boot.) The "short" speeches Obama gives at town halls to leave time for questions still run 35 minutes, and he still only takes questions from five or six voters before he leaves. (By comparison, McCain stays longer, giving shorter answers but more of them.) Even his experience as a community organizer in poor Chicago neighborhoods may not translate to the white working-class Democrats he's trying to sway now -- on the South Side, he had to worry about whether he was black enough.

Still, if Obama is going to break free of the demographic trap Clinton hopes to set for him here, Casey isn't a bad way to start. A pro-life Irish Catholic from Scranton, Casey appeals to exactly the same type of voters who loved his father, the late ex-Gov. Bob Casey Sr.: socially conservative, economically populist, working-class white ethnics. In most states, they're called Reagan Democrats. Here, as one Obama aide emphasized, "they're called Casey Democrats." The endorsement came out of the blue late last week, as Casey had said he'd remain neutral until after the primary. The campaign managed to keep it secret for a few days, until hours before Casey joined Obama to kick off the bus tour. Casey doesn't bring the kind of street-level organization that Gov. Ed Rendell, a Clinton backer, has, so no one expects voters to suddenly fall in line just because Casey says to do so. But Obama strategists think he might persuade people who haven't paid much attention to the race to take a look at their guy. Just as important, the campaign insists he will signal to other superdelegates that Obama could appeal to Casey Democrats after all, no matter what happens in the primary. Casey is as cautious as first-term senators get; if Obama was as weak here as Clinton says he is, the endorsement might not have happened now.

The Obama campaign's theory -- that the more you see him, the more you like him -- has seemed to hold true in earlier states. "I think that in and of itself, just his presence, will mean a lot," said Rick Gray, the mayor of Lancaster, Pa., in Amish country, where Obama's tour will stop Monday. Gray is on Obama's statewide steering committee (like Harris, the Steelers legend). "The agenda he's laid out for the next few days takes him right through the heart of Pennsylvania, and right where all the people are." At Altoona's Original Texas Hot Dogs, where the most expensive item on the menu -- a fish sandwich, in case you're curious -- costs $2.15, Obama seemed to stir the couple of dozen people who were sitting and eating when he walked in Saturday for an "off-the-record," campaign jargon for an unannounced, but still carefully planned, stop. "I haven't quite made up my mind, but after this, I think he's pretty down to earth," said Bob Burchfield, 71, a retired utility worker from nearby Clearfield County. On Friday, Obama swung by the Edgar Thompson Works in Braddock, the oldest working steel plant in the country, and seemed to have a shot at the workers' votes. "I think he's standing with us," said Bill Filus, the legislative director of United Steelworkers Local 1219M. He was still undecided, but open to Obama, depending on his trade policy. Filus didn't like NAFTA, so he didn't like Bill or Hillary Clinton much, but he did like both Caseys. "We've heard a lot of rhetoric over the years ... I want action, I want to see commitment."

Even so, Pennsylvania is an enormous state, with more than 4 million registered Democrats. If literally every person Obama personally meets between now and April 22 votes for him, it still won't make much difference in the final result. The bus tour is a sort of ersatz retail politics, designed more to get Obama on local TV as a regular guy (eating hot dogs, drinking beer, bowling) than to persuade people through one-on-one conversations as in Iowa or New Hampshire.

In the end, though, that's OK with Obama's aides. He may be behind in Pennsylvania, as Casey never failed to remind crowds over the weekend, declaring that the state, like Obama in the state, is an underdog. So what? He's still ahead in the polls that his Chicago HQ argues should count most -- the delegate tally. Winning Pennsylvania, in spite of Rendell, in spite of the years both Clintons have spent campaigning here, might knock Hillary out of the race. But with Clinton running out of room to make up ground, just keeping it close could set Obama up for another spare down the line.