Where in the world is Morgan Spurlock's 'stache? 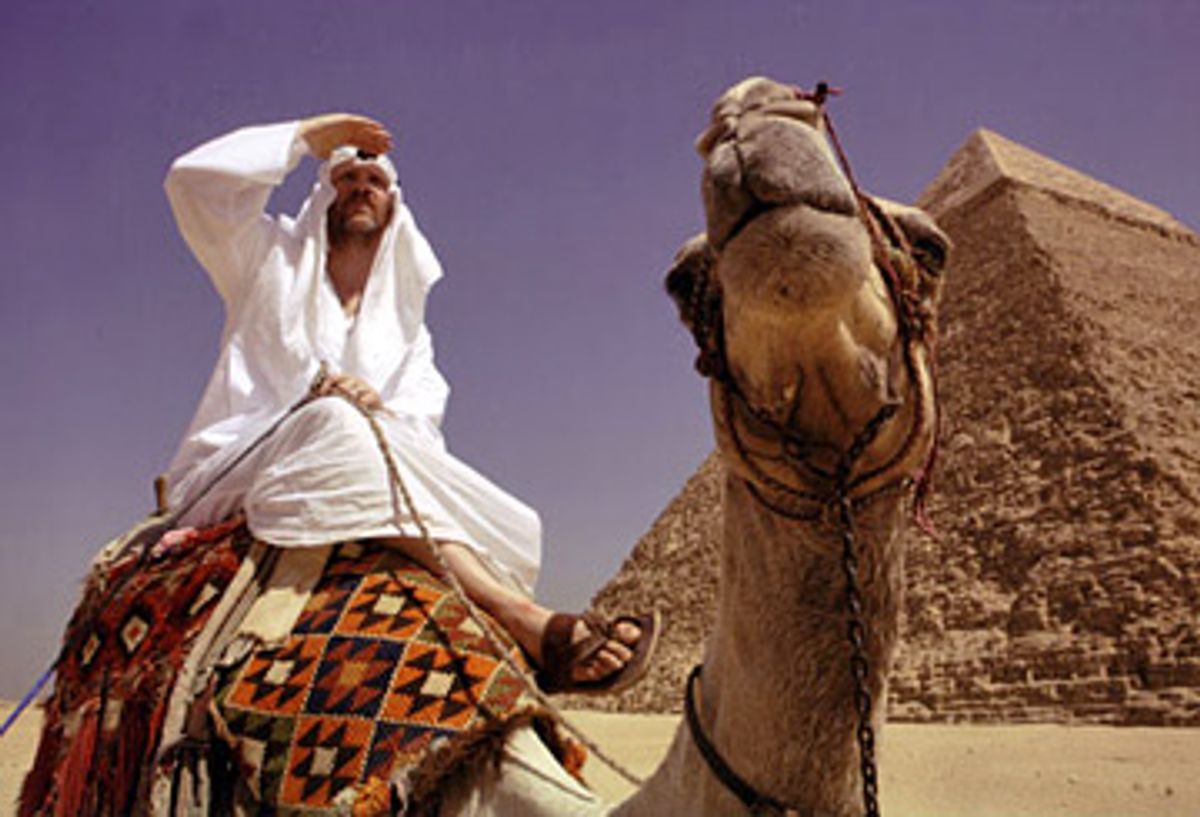 Morgan Spurlock searches for the world's most wanted man in "Where in the World is Osama Bin Laden?"

Morgan Spurlock is such a genial, good-natured guy that you can't resist him, even when his vehicle of self-delivery is as awkward and ass-backward as "Where in the World Is Osama bin Laden?", Spurlock's new documentary. Spurlock's likable-Joe persona (and his ever variable hipster-meathead facial hair) are both the method and the message of "Where in the World," in which the "Super Size Me" director travels to Egypt, Morocco, Israel, Saudi Arabia, Afghanistan, Pakistan and other contemporary fear-zones, purportedly in search of "the world's most dangerous man."

Most people in those places find Spurlock as appealing as we do, it seems. He swaps Erma Bombeck-style parenting gags with a Moroccan family in a dire shantytown outside Casablanca and a nomadic Afghan family who live in a United Nations tent they bought on the black market. He even cracks up a truly frightening Saudi imam who has just preached a sermon urging Allah to "make Palestine a graveyard for the Jews" and to "make Iraq a graveyard for the Christians." I'm not dismissing Spurlock's desire to find humor and humanity even in that guy; there's an insight at work there that, like so much of this film, hovers on the cusp between stupidity and profundity.

Of course we don't believe for a second that this dude with the affect of a '57 Chevy enthusiast, or maybe of that older guy in "Dazed and Confused" who still hung out with high school students, is seriously looking for Osama bin Laden. That's both a strength and a great weakness of "Where in the World," which tries a little too consciously to replicate the ingenious formula of "Super Size Me." In that film, Spurlock used a one-note joke or frat-boy stunt (eating nothing but McDonald's food for a month) as a way of opening up a profound and depressing truth: The food many Americans eat is literally killing us.

But the joke in "Super Size Me" was both funny and shocking, and Spurlock followed through on it. Suffering an ordeal of body, mind and spirit to rival the medieval saints, this one ordinary guy took on the world's most ubiquitous corporations. The joke in "Where in the World" -- one ordinary guy taking on the ultimate supervillain, I guess -- isn't as funny or as genuine. Spurlock's wife is pregnant with their first child as he undertakes his search, and his idea is to find the man who has made the world into such a terrifying place for innocent babes. First of all, Spurlock isn't going to get anywhere near Osama, and the humor involved in asking random civilians in Riyadh or Ramallah or Kabul about him quickly wears thin.

More important, Osama didn't make the world a more dangerous or evil place for Spurlock's kids and yours and mine, or at least not much more. He just made Americans batshit-crazy about it. (I lived through 9/11 in Manhattan and do not require a lecture on terrorism, thank you very much.) And as the film ruefully admits, wherever in the world Osama bin Laden is or isn't, he just isn't important anymore, if he ever was. Islamic terrorism has become a global idea or meme, and it wouldn't disappear if he was killed or captured. To most ordinary Muslims in most places, caught between the mistrust of the West and their own corrupt and despotic ruling class, Osama is an embarrassing irrelevance who has done them a tremendous disservice.

Beneath his shtick Spurlock actually isn't a dumbass, even if his film yo-yos from recycled Bush administration rhetoric at one end to we-are-the-world sentimentality on the other. The point he's striving for here is both simple and valid. If more Americans got out of our cubicle-to-couch cycles and went places, including the countries where we are told everyone hates us for our freedom, we'd find much more commonality than difference. We might begin to view the grand, mythic narratives that govern American foreign policy and domestic politics with some skepticism, or at least some perspective. Spurlock comes closest to showing his ideological hand in the only two episodes where he encounters overt hostility. Both are in countries defined as staunch American allies: One is in the ultra-consumerist, ultra-fundamentalist society of Saudi Arabia, and the other is in an Orthodox Jewish enclave of Jerusalem.

"Where in the World Is Osama bin Laden?" feels like two different movies working at cross-purposes, which may account for the hostile reviews it's been piling up. The second film, Spurlock's point of arrival, is the warm, engaging, Michael Moore-flavored Arab world travelogue I've been discussing. The first one is a mind-bendingly dumb, if occasionally amusing, series of pop-culture riffs on Osama himself, who appears as a clownish rapper (taunting the West with the MC Hammer dance to "Can't Touch This") and then as the villain of a video game, going mano-a-mano with mustachioed hero Morgan Spurlock, of course.

I can see that each of these movies might appeal to somebody, and I suppose Spurlock is betting that the combination can break "Where in the World" out of the cramped commercial ghetto to which all DAFURs -- documentaries about fucked-up reality -- are consigned. Who knows? If I was any good at judging audience taste, I'd have invested in "Juno." Spurlock seems like a terrific guy: I'd love to have a beer with him (to quote the American voter) and I wish him every success. But he's got to learn more than one joke. "Where in the World Is Osama bin Laden?" is now playing in New York, Los Angeles and other major cities, with wide national release to follow.