The former CNN news anchor speaks about his program's use of retired generals as war commentators and about his war coverage generally. 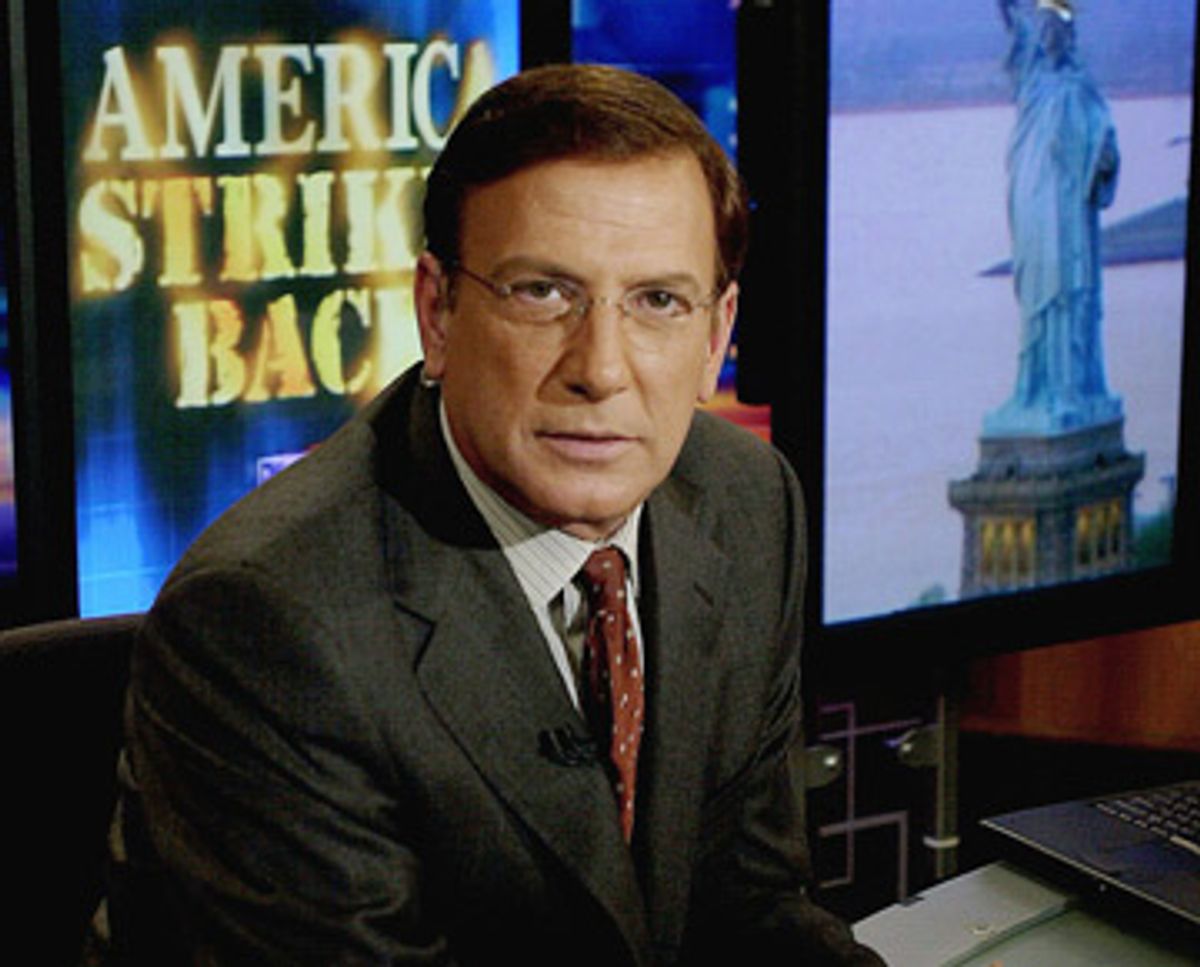 Yesterday, Democracy Now broadcast an excellent report on what ought to be (but isn't) the ongoing scandal revealed by the NYT concerning the establishment media's use of "military analysts" in the run-up to the Iraq war and after. The whole segment is worth watching or reading (transcript and video are here) -- retired Air Force Col. Sam Gardiner, for instance, opined that "when you put together the campaign that [Pentagon Communications official] Torie Clarke did with these three elements, you're very close to a violation of the law" which prohibits the use of military propaganda -- but I want to highlight one vital fact conclusively demonstrated by this segment.

The severe problems created by using retired U.S. Generals as military analysts to comment on American wars have long been brought to the attention of the establishment media -- long before Sunday's NYT story. Democracy Now's Amy Goodman had a rather contentious interview all the way back in 1999 with then-CNN anchor and vice-president Frank Sesno regarding the use of these retired Generals to comment (in an almost uniformly pro-Government/pro-war manner) on the Clinton administration's bombing campaign in Serbia (that interview transcript is included in the above link). Even back then, Goodman repeatedly asked CNN's executive why anti-war voices were excluded almost entirely from CNN's coverage of that war and whether CNN was concerned about the obvious conflicts and propaganda risks in "putting retired military generals on the payroll as military analysts."

Identically, in April, 2003, a couple of weeks after the invasion of Iraq, Democracy Now interviewed then-CNN anchor Aaron Brown about CNN's reliance on retired Generals as military analysts, the virtually complete exclusion of anti-war voices from its coverage, and the various problems which such behavior engenders. Senso and Brown were equally dismissive of these concerns, contending that the "retired Generals" were merely speaking about apolitical tactical questions rather than engaging in political advocacy about U.S. policy. Both were also completely dismissive of the more general concerns that were raised -- in 2003, Brown said: "I think the generals question, respectfully, is a colossal red herring" and said that, once a war began, there was no reason to hear from anti-war advocates:

JEREMY SCAHILL: Aaron, will you consider hiring a paid antiwar analyst for NewsNight?

AARON BROWN: I honestly don't think it's a particularly relevant question. I mean, it's not—it's—we're in a war. There's going to be times after the war when we're going to have to talk about how that—how the occupation is being run and whether it's being run appropriately by the right people, and in a fair and smart way, and what the implications are of an American occupation of an important Arab capital. And at that point, by and large, the generals go away because there's no war to cover. Or there's a different war to cover, a different kind of war to cover. And we'll look for a range of people to talk about those issues.

AARON BROWN: But again, no, because I think it's a red herring issue.

AMY GOODMAN: To have an antiwar analyst onboard, paid to be at your beck and call, like the generals?

I interviewed Brown this morning about all of these matters (link below). Before doing so, I spent several hours reading through transcripts of Aaron Brown's CNN shows on Iraq from January through May, 2003. The distinction he drew to defend CNN's heavy reliance on pro-government military analysts -- that they were there only to instruct viewers on tactical and military questions, not to engage in political advocacy -- is completely artificial. Of course the retired Generals continuously said things to promote support for the war.

In fact, at least two of the retired Generals the NYT article featured -- Gen. David Grange and Gen. Donald W. Shepperd -- were featured on several of Brown's shows. As was true for most of those "military analysts," they frequently insinuated all sorts of political (and invariably pro-war) "analysis" into their commentary. As but one example, Gen. Grange was a guest on Brown's CNN show on January 3, 2003 and began his appearance by singing the praises of the imminent invasion:

But I believe that to go ahead and remove that regime, to then temporarily occupy Iraq, to change it from a fascist regime to some type of democratic governance will then give us a geopolitical advantage in that region to change the status quo, which will affect Iran, it will affect the relationship between Israel and the Palestinians, it will affect the Hezbollah terrorist organizations.

And then, with the resources from Iraq, the oil, for example, will cause it to be able to transition very quickly and actually cause a big change, I think, in the Middle East.

That was pro-Government political advocacy in its purest form. It was virtually never rebutted by any guests and it was routinely spouted by these allegedly "independent" military analysts. The fact that, even now, Brown and other CNN officials depict these retired Generals as apolitical "military analysts" itself demonstrates how pernicious this practice was -- and continues to be.

Moreover, just on a common sense plane, the distinction between "tactical commentary" and "political advocacy" is totally artificial, since people who supported the war would, almost by definition, view the tactical challenges and risks as being far less significant than war opponents. If CNN's only interest -- as Brown claimed -- was to provide its viewers with expert views on military tactics, then why not hear from military experts who opposed the war and/or who were from countries where was opposition was common? It's just self-evident that flooding viewers with Pentagon-connected, pro-war "military analysts" is going to skew the coverage, even with regard to supposedly apolitical tactical commentary.

In fairness to Brown, his show was mildly more balanced and nuanced in its war commentary than virtually any other show on CNN or anywhere else in the establishment media. Still, the "war experts" whom he paraded across the screen with great regularity were almost uniformly pro-war -- Ken Pollack and Robert Kagan were frequent guests, for instance, and almost always opined unchallenged by any anti-war guest.

This is the central point I've been trying to emphasize since I first read the NYT expose. Many of the details that article revealed were new, but the conceptual journalistic problems of relying heavily on U.S. military sources -- the principal conceptual problem being that these media outlets were uncritically amplifying government claims, i.e., acting as propaganda arms for the Government -- were well known and they simply ignored them. Promoting the pro-war view was their principal mission, and there is simply no way to deny that when one goes back and looks at their coverage choices.

Brown, who now teaches journalism at the Walter Cronkite School of Journalism at Arizona State University, was receptive to some of these criticisms -- far more so than the standard establishment journalist -- and was defensive about many others. But I thought his responses were nonetheless interesting, instructive, and occasionally thoughtful. The interview I conducted with him this morning about these matters can be heard here.

UPDATE: In the current issue of The National Interest (May/June 2008), I have an article which examines a related issue: the pervasive wrongness of the pundit class and the complete lack of accountability they enjoy. It can be read here.

UPDATE II: As I noted yesterday, Norman Solomon produced an excellent documentary in 2007 -- entitled War Made Easy: How Presidents and Pundits Keep Spinning Us to Death -- which examined several issues relating to the Government/media's joint war propaganda, including the use of "military analysts." Solomon has now provided relevant video commentary from the documentary, as well as a written response to the NYT story, to C&L, which can be viewed and read here.

UPDATE III: From FreePress.net, detailing how the "military analyst" program functioned and action that can be taken (h/t sysprog):