Whose fault is the Clinton-Obama stalemate?

Hillary's missteps are legion, but both candidates are flesh and blood, and their squandered opportunities have prolonged the race. 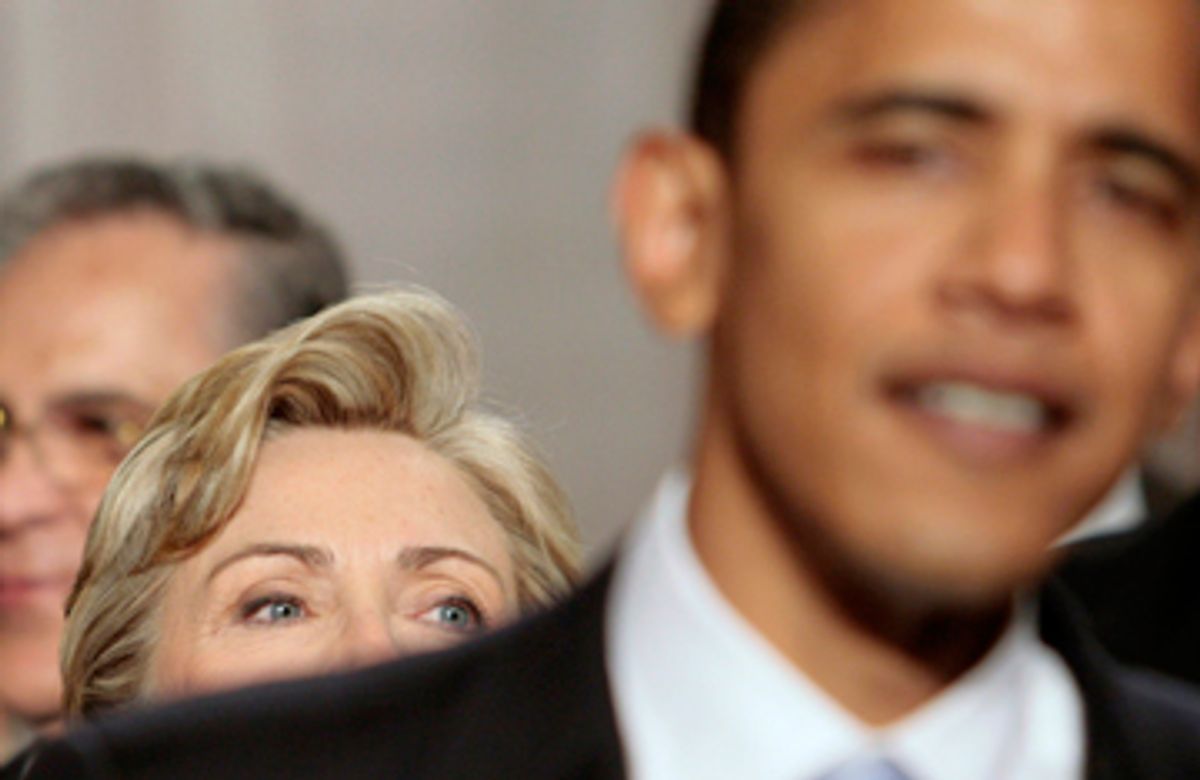 As we all -- press and partisans alike -- saddle up for the May 6 primaries in Indiana and North Carolina, you can almost hear the desperate cries from the posse: "Let's head them off at the impasse."

But why are the Democrats still stuck? Maybe, just maybe, the usual reasons for this demented deadlock of democracy do not go far enough. Maybe it is time to stop simply blaming the no-exit campaign on the Democrats' obsession with proportional representation; the creation and indecision of superdelegates; the shortage of party leaders with the stature and the moxie to resolve things; and the stubborn refusal of the Clintons to interpret a nearly double-digit victory in Pennsylvania as a message to quit the race.

All this is designed to raise a heretical notion: The fault just might lie with Barack Obama and Hillary Clinton themselves, since the two candidates have not given Democrats much reason to change their minds over the last few months.

Granted, this notion violates the revered tenets of conventional wisdom. The shouting-match tensions within the Clinton high command have been underscored by the ouster of campaign manager Patti Solis Doyle and the defrocking of mega-strategist Mark Penn. But the Obama campaign -- like any winning political operation -- is depicted as a veritable Mount Olympus, populated by geniuses and giants who never make a false step. In truth, the Barack Bombers, like their counterparts in Hillaryland, may be closer to mere mortals than political demigods.

No one can deny the potency of Obama's perpetual motion $1-million-a-day fundraising machine, nor his star-power capacity to fill the Grand Canyon, if necessary, with rapturous supporters. And, in case you have somehow failed to notice, Obama can also deliver a credible speech. But there is sometimes the sense that the candidate is carrying the campaign rather than the other way around. For example, exactly what benefits did Obama's better than 2-to-1 financial advantage on television buy him in Pennsylvania?

The internal response to any crisis -- from the flagging poll numbers in Iowa in the fall of 2007 to the furor surrounding Rev. Jeremiah Wright -- is for Obama to give a speech. But whether it was his address to the Jefferson-Jackson Day party dinner in Des Moines (outtakes from that speech were featured in most Obama TV ads before the caucuses) or his widely praised words about race and politics, soaring rhetoric can only carry you so far in a campaign. (Insert obligatory Adlai Stevenson comparison here.)

The problem that Obama has had with expanding his base in every primary since Wisconsin (Feb. 19) may boil down to the simple equation that either you get it (the young, the affluent and African-Americans) or you are tone-deaf (older voters, blue-collar Democrats, middle-class women and Hispanics). Trapped by the true-believer enthusiasm that the fledging Illinois senator arouses, the Obama campaign has become something of a Cool Kids Club. Either you are a full-fledged member (with the secret handshake and the decoder ring) or else you find yourself voting for a well-known, albeit flawed, alternative called Hillary Clinton.

Obama is the first insurgent candidate in memory who has not come up with a new issue to challenge the establishment favorite. (Clinton's 2002 vote to permit the Iraq war was part of the background of the campaign before Obama decided to run.) By predicating almost his entire campaign on inspiration and process (he can reform the broken system in Washington and Clinton cannot), Obama has deliberately forsaken bread-and-butter issues as a means of persuasion. Maybe a federal bowling-ball subsidy plan might have been derided as economic pandering, but it would have at least given Obama something new to talk about in the run-up to the Pennsylvania primary.

Listing the mistakes of the Clinton team should have been one of those tasks reserved for Hercules after he finished cleaning out the Augean stables. From the ever-changing slogans (a personal favorite: "Turn Up the Heat," which was briefly, very briefly, unveiled in Iowa) to its fiscal mismanagement and its failure to effectively organize in the February caucus states, the Clinton campaign has offered a Ph.D. program in "Missed Chances." In fact, with a minimum of competence, it is easy to envision how Clinton could have been running close to even in the delegate fight right now.

It remains baffling, for example, why Hillary insists on overhyping her foreign-policy experience as first lady (Bosnia, anyone?), but almost never mentions her legitimate national-security credentials, based on her five years of trips to combat zones as a member of the Senate Armed Services Committee. The best guess is that early on, based on polling, Clinton became convinced that the Armed Services Committee (on which she serves with John McCain and Joe Lieberman) sounds far too hawkish for Democratic audiences and should be airbrushed out of her résumé until the general election.

More than her wipeout in the February caucuses, Hillary's biggest losing streak has been in the spin room. The Clinton campaign has lost virtually every public argument since Iowa. For months, the Hillary spokesmen stubbornly insisted that the Denver Convention should seat the disputed Michigan and Florida delegations even though both states held primaries in flagrant violation of Democratic Party rules. Just in political terms this contention was absurd, since the only way that these pro-Hillary delegations would be seated would be if the Clinton forces had a majority. And, if they had a majority, they would not need the votes from these outlaw primaries.

By not promptly pushing for do-overs in Michigan (where Obama's name was not even on the ballot) and Florida, the Clinton campaign contributed to these states', in effect, being wiped off the Democratic map. Aside from New York and Arkansas, Florida is probably the state whose demographics (disproportionately older, female, Hispanic and Jewish) are most suited to Clinton. And Michigan, despite the large black vote in Detroit, is the epicenter of blue-collar woes.

With these two states eliminated from any serious discussion in the delegate arithmetic, the Obama campaign began to convincingly argue, starting in early February, that the race was virtually over since Clinton could not mathematically catch up in pledged delegates. Thus was born the debilitating image of Hillary the Selfish, who would rather destroy the party than bow to Obama's de facto victory.

Despite the weirdness of Texas holding a disorganized caucus on the night of its March 4 primary, and thereby giving a much-needed delegate boost to Obama, the Clinton public-relations team also failed to get anywhere with the fairness issue. In fact, about the only time the Clintonites successfully denounced caucus procedures was in Nevada, where they (more or less) won. Caucuses, which measure intensity, have come to be seen as valid measures of Obama's appeal. But superdelegates-- members of Congress and party officials who remain Clinton's only route to the nomination -- are regarded as the sort of anti-democratic creations that North Korea might embrace.

Despite all these hapless misadventures by the Clinton and (to a lesser extent) the Obama campaigns, there should be little chortling on the Republican side. For the ideal person to write a manual about how not to run for president is John McCain, whose mismanaged campaign left him on the side of the road, broke and politically homeless, in mid-2007. Maybe the McCain resurrection illustrates the most important lesson of all about presidential politics: It is better to be lucky than good.