He conquered the World Trade Center

"Man on Wire" and its daredevil star thrill Tribeca, but Mamet's "Redbelt" is a jiu-jitsu pratfall. Plus: Is Brecht still relevant? 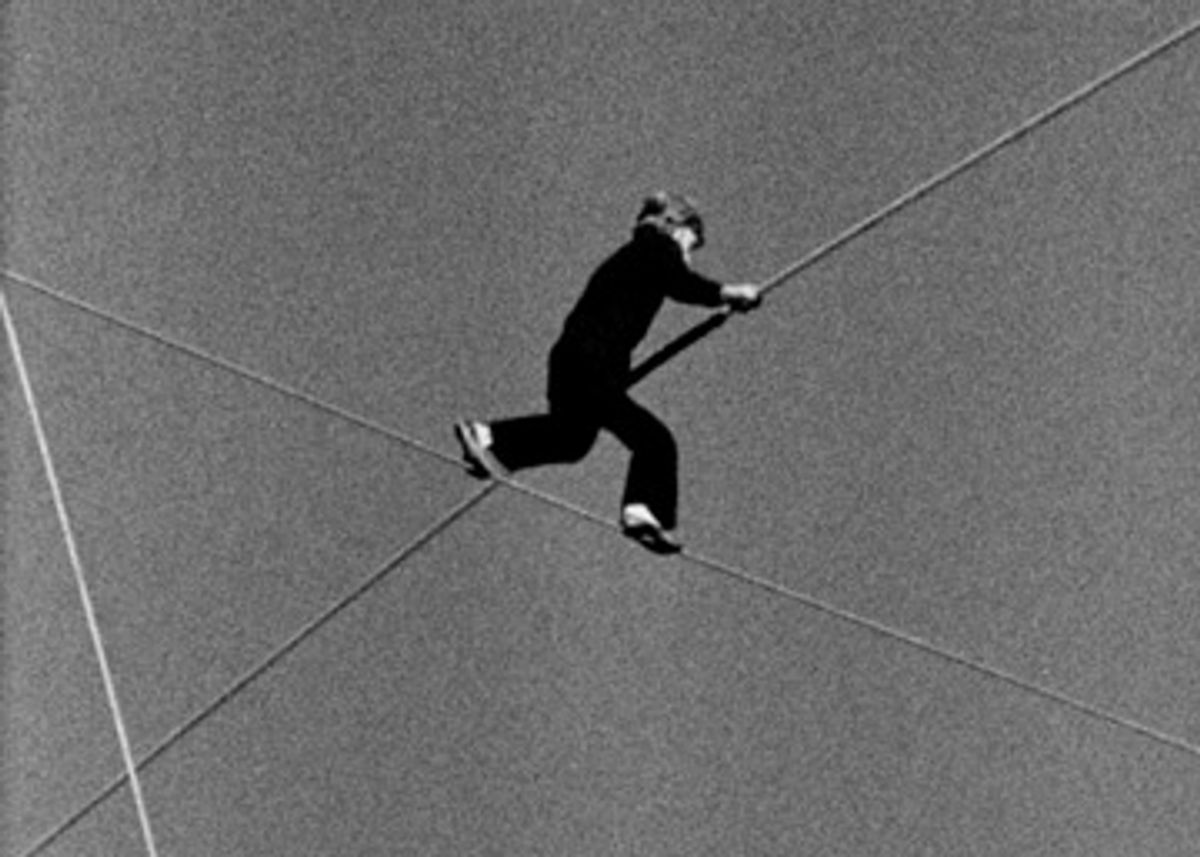 Just as the house lights went down at the New York premiere of James Marsh's remarkable documentary "Man on Wire" at the Tribeca Film Festival on Saturday night, the woman sitting next to me reached into her handbag and pulled out something small, white and wiggling. It was her toy poodle. I'm fairly certain that in two decades as a festivalgoer and four as a filmgoer, I've never sat next to a dog at the movies before. (The old Times Square theaters certainly hosted various forms of animal life, but all on a smaller scale.)

Fifi or Daisy or Nicola, or whatever her name was, was quiet and well-behaved, and she got to see what was probably the most exciting single event of Tribeca's opening weekend. (OK, I skipped the premiere of the Madonna-produced documentary about Malawi, "I Am Because We Are." But give me a break.) "Man on Wire" tells the amazing but true story of French wire-walker Philippe Petit's August 1974 conquest of the World Trade Center, a media sensation in its time and for obvious reasons a haunting memory today. For British-born director Marsh and for Petit, both New Yorkers of long standing, screening this film two or three miles north of a certain well-known hole in the ground was clearly a moment of high emotion.

"Man on Wire" will open in theaters this August, so I won't spend much time explaining it. In any case, you should see it for yourself; there's no way a review can adequately convey its complicated resonance, or its subtle poetic transformation. Let's just say that the story of how Petit and a small group of accomplices, after many months of planning, succeeded in smuggling themselves and nearly 1,000 pounds of equipment to the rooftops of both WTC towers, and then executing one of the most difficult and dangerous stunts imaginable, is itself amazing. (And yes, you can't help thinking about other people who devoted months of planning to the towers, with a different aim in mind.)

What's far more wonderful, though, is Petit himself, a compact, intensely charismatic little guy who seems to be part acrobat, part madman and part Zen master or medieval mystic. Petit's physical strength, balance and coordination are well beyond normal human capacity, but it's clear that what he loves about wirewalking, more than anything else, is the intense mental concentration, the absolute requirement that you stay focused on where you are right now in time and space.

Walking on a 3/4-inch steel cable a quarter-mile above the ground is unimaginable to nearly all of us, for so many good and obvious reasons. But once Petit stepped out on that wire, he clearly loved it. He was out there for 45 minutes. He crossed back and forth, from tower to tower, eight times. He lay on his back and contemplated passing seagulls and airplanes. (Seeing Petit on the wire and a jetliner in the background is distinctly unsettling.) He dropped to one knee and gave a salute. He sat down on the wire and looked down at the ground. If what Petit did was almost literally superhuman, it flowed from the most recognizable of human desires, the desire to leave the limitations of body and gravity behind, to rise above earthly concerns and float in the clouds, to inhabit impossible dreams.

Sgt. Charles Daniels of the Port Authority Police Department was among the cops sent to arrest Petit, and his comments express the pure wonder that Petit's daredevil act evoked in many who witnessed it: "I observed the tightrope 'dancer' -- because you couldn't call him a 'walker' -- approximately halfway between the two towers. And upon seeing us he started to smile and laugh and he started going into a dancing routine on the high wire ... When he got to the building we asked him to get off the high wire, but instead he turned around and ran back out into the middle ... He was bouncing up and down. His feet were actually leaving the wire and then he would resettle back on the wire again ... Unbelievable, really ... Everybody was spellbound in the watching of it."

That wonder survives, 34 years later. When Petit bounded to the stage of Tishman Auditorium in Greenwich Village after the screening -- looking only slightly older than he looked in 1974 -- the entire audience seemed to leap to its feet in one effortless motion. Petit was calm and unruffled; after the applause had died down, he quipped, "I believe what you say at a moment like this is, 'Thank you.'" Of course the response to "Man on Wire" has a lot to do with the ultimate fate of those buildings, 27 years after Petit's walk in the clouds. As Marsh observed, every viewer will bring that subtext to the film, although it is never mentioned. Marsh has done much more than document one man's unlikely accomplishment; he has restored those towers to us as symbols of joy and transcendence.

On Friday night, Tribeca premiered David Mamet's semi-awaited first foray into martial-arts film, "Redbelt," and my advice is this: Don't give up the day job, Dave. The whole thing with misanthropic plays that bit your middle-class audience in the ass -- that was working much better. Mamet turned up briefly onstage at the Tribeca Performing Arts Center to introduce the movie, and at age 60, with a full gray beard and translucent horn-rimmed spectacles, he now bears a totally unexpected resemblance to Allen Ginsberg. If you follow such things, you may have noticed that Mamet recently declared that his politics have diverged pretty far from, say, Allen Ginsberg's. But even I do not think it's fair to blame the badness of "Redbelt" on Republican ideology.

Mamet told us that "Redbelt" is meant as an homage to the spirit of Japanese samurai films and a tribute to the spirit of jiu-jitsu. Fine, and I get that, as far as it goes. Chiwetel Ejiofor is actually terrific as this film's noble samurai, Mike Terry, who runs a storefront martial-arts studio in a downscale neighborhood of an unnamed American city. Mike's a noble man in an ignoble world; he's got bills to pay, a hothead cop as his protégé and family connections to the Brazilian mob. He's never been interested in the "mixed martial arts" competitions produced for TV, until late-night encounters with a neurotic female lawyer (Cathy Cahlin Ryan) and a boozed-up action star (Tim Allen) lead him in several unexpected directions.

Sounds OK so far, right? But Mamet's trademark artificial, mutual-incomprehension dialogue and con-game plotting are ineptly matched to the action genre (and feel stale in any case), while the jiu-jitsu scenes are so incoherently shot and edited you can't tell if the fight choreography is any good or not. Characters drop into the story and disappear again; neither Mike's wife (Alice Braga) nor his cop buddy (Max Martini) nor Ryan's attorney hangs around long enough to become significant. The accidental shooting that sets the plot in motion is an utterly ludicrous device, or at least I thought so until the final fight scene in which Mike must prove his honor, which might seem far-fetched on a pay-per-view wrestling broadcast. Perhaps Mamet believes he's turning his talent toward populist vehicles, but this uneasy, weird movie won't please any segment of the audience. "Redbelt" reminds me of the old French joke about English shoes; it's an action movie made by someone who has heard them described, but never actually seen one.

Moving from one famous playwright, and one political extreme, to another, we come to one of Tribeca's central niches: the kind of New York-centric film that's likely to play almost nowhere else, or at least that will only play to audiences who wish to bask in reflected light from the glow of New York self-approbation. That's a harsh light in which to appraise the Sunday-night premiere of "Theater of War," John Walter's graceful and often fascinating documentary about Bertolt Brecht and his influential 1939 antiwar play "Mother Courage and Her Children," which was produced by the Public Theater in 2006 in a new translation by Tony Kushner. But Brecht would appreciate the irony here, in fact: The problem with Walter's film is not Walter's film itself, but rather the fact that it will hardly be seen by anyone likely to disagree with its views about Brecht, about the importance of radical art, about the continuing validity of Marxist modes of analysis, and so on.

Actually, there's a great deal to be said about Brecht's life and work that isn't in "Theater of War," which perhaps, again, is not precisely the filmmaker's fault. How and why did Brecht's plays, so carefully constructed to combine popular forms and avant-garde techniques, become the exclusive province of the left-wing intelligentsia? Is his influence on the film world purely a question of a bagful of facile formal tricks or something more profound? (It strikes me, for instance, that Brecht's desire to divorce the audience from the action and compel rational reflection, rather than draw the audience into the story and compel catharsis, marks an unresolved division in the history of dramatic art that still troubles us today.) Given Brecht's courageous artistic defiance of Nazism and McCarthyism, how do we understand his accommodation with the postwar regime in East Germany?

Still, OK, let's be fair. For those interested in the continuing relevance of theater in a society dominated by momentary electronic impulses, in the responsibility of artists in wartime and in the greatest anti-capitalist, anti-government, antiwar and anti-romantic playwright of the 20th century, Walter's cool, capable, stimulating exploration is a must. The scenes of star Meryl Streep, director George C. Wolfe and Kushner rehearsing "Mother Courage" are tremendous, as are Walter's wry, Brechtian digressions into the backstage work of the costumers and prop-makers. None of which stops me from suspecting that if Brecht were alive today he'd be working in reality TV or producing viral video.