As the sea ice melts, a toxic stew of mercury and synthetic chemicals is seeping into the Arctic food web, harming the area's people. We may be next. 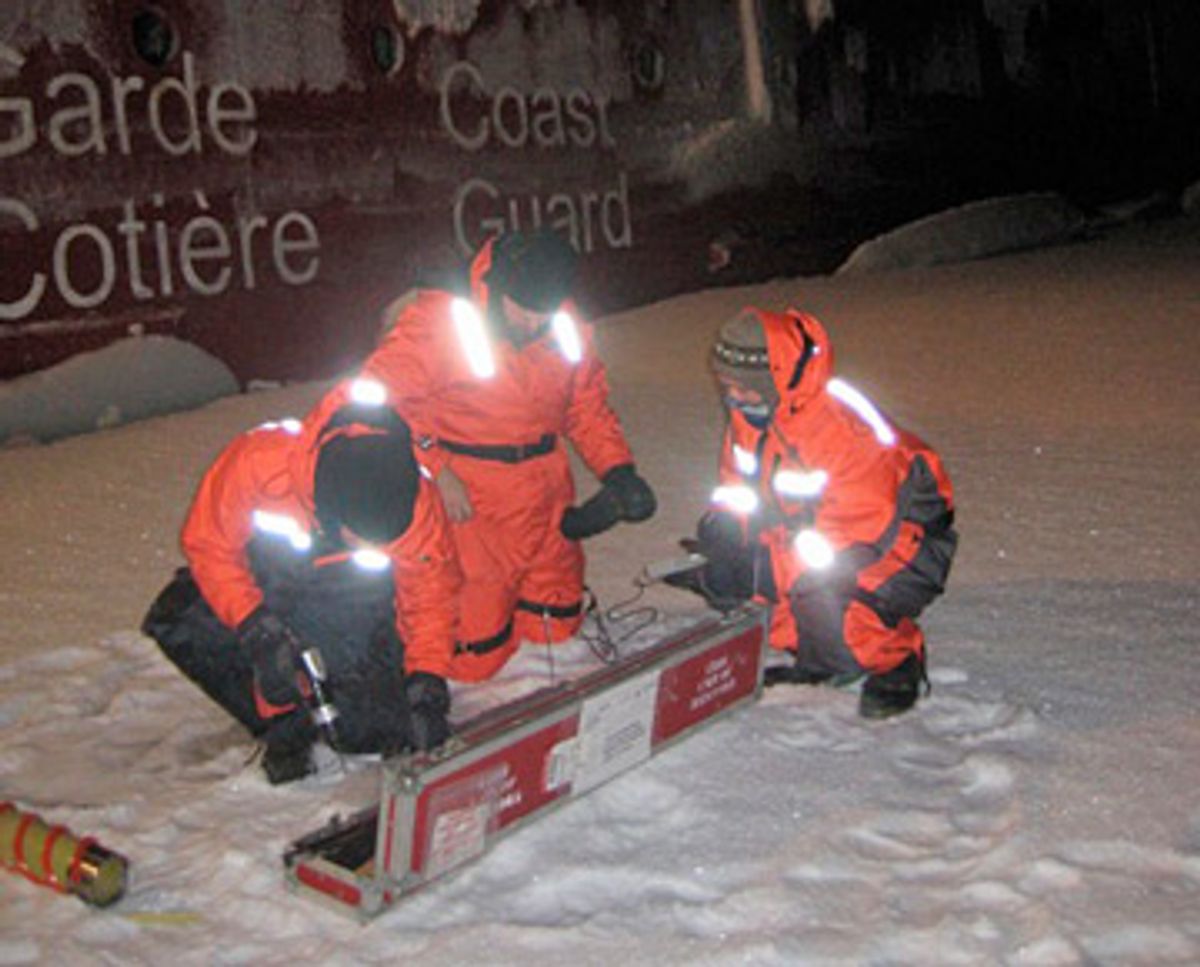 Over 300 miles north of the Arctic Circle, in the polar dark of a December morning, University of Manitoba Ph.D. student Jesse Carrie is out on the frozen Beaufort Sea, collecting ice samples to measure for mercury and pesticides. Lowered by crane from the deck of the icebreaking research vessel the CCGS Amundsen, and accompanied by a rifle bearer who keeps watch for polar bears, Carrie extracts ice cores and vials of frigid water. Carrie is part of a $40 million International Polar Year scientific expedition, the first ever to spend the winter moving through sea ice north of the Arctic Circle. The expedition's labor-intensive work is essential to understanding the impacts of global warming.

As the Amundsen cuts through ice across the top of the globe, Carrie and his fellow researchers are uncovering evidence of a disturbing fallout of climate change. They are finding toxic contaminants, some at remarkably high levels, accumulating in this remote and visually pristine environment. Although there are no industrial sources in the Arctic, residents of the Far North have some of the world's highest levels of mercury exposure, some well above what the World Health Organization considers safe. High levels of mercury -- a powerful neurotoxin -- are being found in Arctic marine wildlife, including ringed seals and beluga whales, both staples of the traditional Northern diet. Levels in Arctic beluga have increased markedly in recent years.

When coal is burned in power plants in the U.S., China and elsewhere, mercury is released into the atmosphere. Airborne, mercury can travel great distances before settling to the ground, or into lakes, rivers and oceans. Air and ocean currents, propelled by weather patterns and storm systems, sweep the mercury north. But the recent increases in Arctic mercury outpace and cannot be explained by smokestack emissions alone, says Gary A. Stern, a senior scientist with Canada's Department of Fisheries and Oceans, professor at the University of Manitoba and co-leader of the Amundsen expedition. Rather, signs point to global warming and other disruptive impacts of climate change.

As temperatures rise, causing sea ice, permafrost and snow to melt, the mercury that had been frozen in place is now being released, causing exposure up and down the food web. "Climate change alters exposure in the north and increases the system's vulnerability," says Robie Macdonald, a research scientist with Canada's Department of Fisheries and Oceans.

Yet the Arctic researchers are routinely recording a lot more than mercury. They are seeing synthetic chemicals such as the brominated flame retardants known as PBDE's (used in upholstery, textiles and plastics), as well as perfluorinated and chlorine compounds. And while long banned in many countries, lingering amounts of DDT and PCBs continue to turn up in people and animals in the Far North. Of concern due to their persistence and ability to accumulate in plant and animal tissue -- particularly the fat prevalent in Arctic animals -- these chemicals are also known to disrupt the endocrine hormones that regulate reproduction and metabolism. Some are considered carcinogens.

Alaskan polar bears, for instance, have some of the highest levels yet found in Arctic mammals of hexachlorohexane (HCH), a pesticide used to kill fungi on food crops. Carrie's ice samples, collected hundreds of miles from any agricultural sites, contain HCH. Polar bears also have some of the highest recorded levels of perfluorinated compounds, chemicals used in waterproofing and in fire and stain retardants. Indigenous people in both the Canadian and Greenland Arctic have some of the world's highest exposures to these persistent pollutants.

In the summer of 2007, Arctic sea ice reached a record low. Scientists monitoring the 2008 winter ice pack suspect this year's summer ice may also be remarkably low. As David Barber, Canada Research Chair in Arctic system science at the University of Manitoba, puts it, "Well over a million years of all ecosystems evolved to take advantage of this ice cover." With markedly less substantial sea ice cover, the hemispheric system is being thrown off balance, prompting changes that are increasing the load of contaminants in the Arctic.

As Stern explains, increased snowmelt, runoff and erosion in the Mackenzie River Basin are also now washing naturally occurring mercury into the Beaufort Sea. At the same time, disappearing sea ice leaves more water exposed to sunlight, increasing the growth of marine microorganisms and tiny plants like algae. This accelerates the process that turns mercury into its highly toxic form called methylmercury, which accumulates in marine mammals and fish traditionally eaten by residents of the Arctic. "These changes are happening much faster than anticipated," Stern says one morning on the Amundsen.

Decreasing sea ice is changing other dynamics of the Arctic ecosystem. Seasonal climate changes are pushing some animals farther to find food and prompting some to alter what and when they eat. "With climate shift changing availability of ocean nutrients, some birds that used to fly 50 miles to eat now have to fly 100," says Macdonald. "This means storing more fat, magnifying -- or concentrating -- the contents of the fat, resulting in stress to both birds and their chicks." Because fat cells serve as a reservoir for many contaminants, when broken down to release energy, the toxics are also released, exposing animals from within.

In addition, says Macdonald, "Migrating fish bring with them the contaminants they've hoovered up in the ocean. When the fish spawn, they release the contaminants." Similarly, fish-eating birds can take up these pollutants that they then excrete. It's possible, he says, that animals themselves might be adding to the transport of contaminants.

"The food web is quite important in terms of where contaminants are found," says Derek Muir, a senior scientist in aquatic ecosystems research with Environment Canada. Warmer temperatures and shorter ice seasons -- in lakes as well as the Arctic Ocean -- could alter what happens at the bottom of the food web in ways that affect how contaminants move up the food ladder, he explains. "Warming," says Muir, "could deliver more contaminants up the food chain to top predators, and result in high levels of contaminants in very remote areas."

Because top predators are important traditional food for Arctic people, humans are at the top of the food web. "There is absolutely no doubt of exposure of pollutants with harmful effects to some groups," says Eric Dewailly, professor of social and preventive medicine at Laval University, who works with the International Network for Circumpolar Health Research. There are local sources for some metals and pollutants, but most of the persistent organic pollutants in the Arctic come "100 percent from the outside," he says. Dewailly notes that because people are exposed to mixtures of contaminants, it's hard to isolate the precise impact of a single one. However, studies are now being conducted in Canadian Arctic communities to investigate links between contaminants and cardiovascular, neurological, reproductive and immune system problems.

Climate change is having another hazardous effect on indigenous people. Warming temperatures have caused changes in ice conditions and migration patterns that determine where people hunt and fish. In some northern communities, these changes have begun to push people toward greater dependence on supermarket food, which in remote Arctic villages can be extremely limited.

Research by Grace Egeland, Canada Research Chair in nutrition and health at McGill University, shows that traditional Arctic foods tend to provide more protein, vitamins and minerals than typically available local market food, which is usually higher in carbohydrates, fat and sugar. "These people are feeling so many pressures of transition that they're now at risk," says Egeland of the Arctic's indigenous communities. "There's a human right to food without elevated contaminants," says Egeland. "Based on what we know now, why wait to count the adverse events. Why wait until it's too late?"

But what kind of action should be taken? Can the brakes be put on the cascading impacts of climate change? "If we could slow it down we would," says Barber of the shrinking sea ice. "But we can't do that now; there's too much inertia in the system."

Can we reduce the impact of the pollutants? "We can control persistent organic pollutants," says Muir. It's well documented that when hazardous chemicals -- including mercury -- are taken out of use, environmental levels decrease. And if affected populations are sufficiently healthy, they will recover.

Yet the key to controlling these pollutants, says Muir, is knowing which are persistent, toxic, likely to climb the food web and travel long distances. Muir explains that of the 30,000 or so chemicals now in wide commercial use, only about 4 percent are routinely monitored. Environmental and health impacts of about 75 percent of them have not been studied at all. Meanwhile, these invisible substances are moving to and through the Arctic. And what happens in the Far North, says Stern, may well presage what's to come farther south. "It's the canary in the coal mine," he says.