10 to watch from Tribeca

A hot Swedish girlfriend (who's undead), a Spanish math thriller, getting high with Ben Kingsley and the rest of the best from NYC's spring fest. 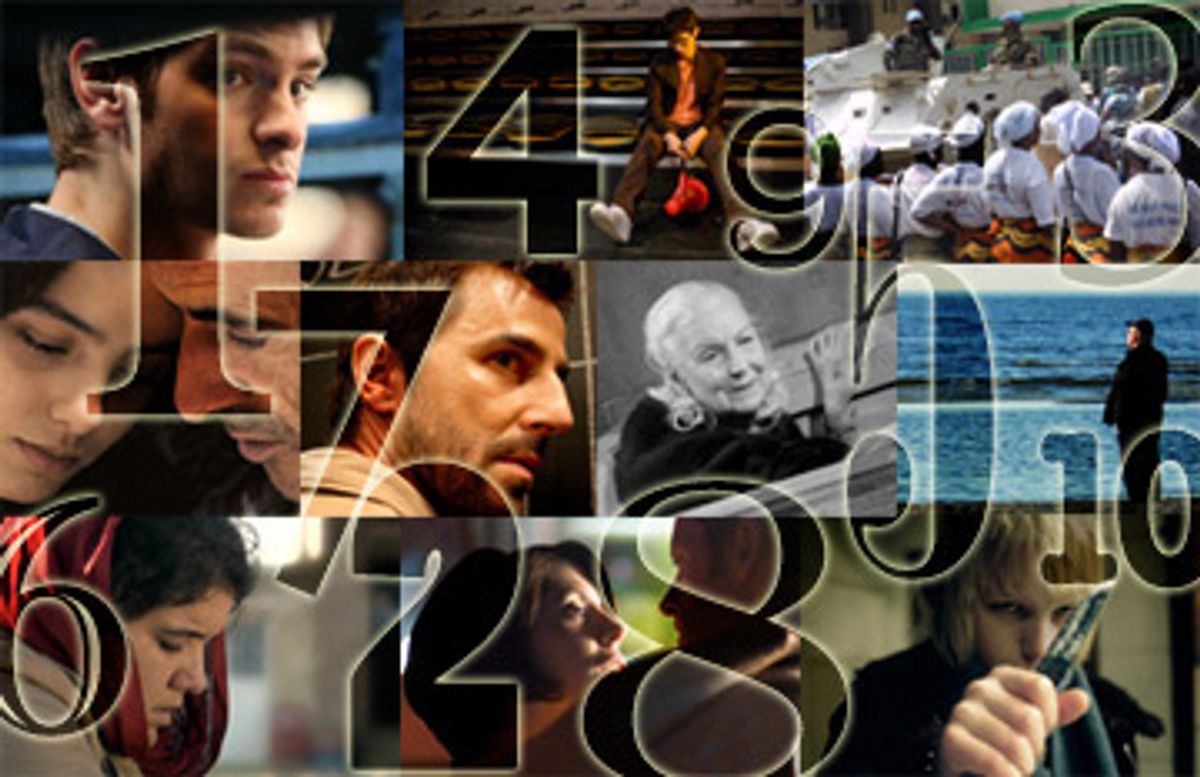 Spring has been on the cool and gloomy side in New York this year, and the Tribeca Film Festival, Gotham's annual flower show for the indie-film trade, has been downsized and shorn of at least some of its self-appointed glitz and glamour. That's mostly a good thing. About the festival, I mean; we cave-creatures of the Northeast could stand a little sunshine right about now.

Of course this year's stripped-down Tribeca had nothing to do with the weather, and only a little to do with the perilous state of the economy. But it felt like a leaner, meaner film festival suited for an era of recession, with its tendency toward celeb-effluvia dampened. We got inside out of the wind and drizzle, we sat in unassuming little theaters with our fellow citizens and we watched movies, many of them invigorating, challenging and even, perish the thought, difficult. Hey, if they made us forget about Hillary Clinton and Barack Obama for a couple of hours at a time, then -- as we say in these parts -- it was a mitzvah.

This year's Tribeca movies didn't offer many life-changing moments or aesthetic breakthroughs, but at least we were spared the massively-hyped premieres of mind-meltingly mediocre films, attended by C-list celebrities, that have plagued this festival in the past. (Even David Mamet's misbegotten martial-arts drama "Redbelt" does not belong in that category.) Tribeca in 2008 gave us a stronger, far more grounded roster, mainly comprising American premieres of noteworthy foreign films and New York showcases for American indies that have built some buzz at other festivals. (I don't think any of the 10 films on my list below were Tribeca world premieres.)

If that's the niche Tribeca's going to occupy in the film-festival ecosphere, at last it's a niche that makes sense. It may not be the niche that founders Robert De Niro and Jane Rosenthal want to occupy, but that's a different question. As Howard Feinstein of IndieWIRE has observed recently, Tribeca has finally become a market festival, but it isn't much like Berlin or Cannes or Toronto. It's a market where IFC scoops up foreign films at discount prices, and where bargain-basement DVD deals are struck between struggling indie producers and struggling indie distributors.

I will gaze into my crystal ball right now and assure you that Tribeca did not premiere next year's big Oscar-sweeping triumph. But at least arguably, Tribeca screened the year's best films made in Britain, France and Sweden; at least two documentaries that will win multiple awards and draw loving audiences; a thriller that could be the latest Spanish-language hit; at least one American indie that's headed for cult status; and the latest work by the cinematic poet laureate of Winnipeg, Manitoba.

I'm betting -- no, I'm nearly certain -- that these 10 films will all be released by the end of the year. For a few that may mean they go straight to DVD, but let's hope not. The weird science of the marketplace right now dictates that even "specialty" films whose economic future lies in home video need a quick look-see in theaters (mostly so people like me will write about them, and people like you will read it). Where I know something about distribution plans, I've mentioned them.

"Boy A" Ambitious both as to structure and theme, and riveting in mood, Irish-born director John Crowley's "Boy A" follows a young man named Jack (Andrew Garfield) as he begins a new life in the English city of Manchester. Gradually we pick up the pieces: Jack has spent many years in prison for a terrible crime he committed as a child, and now must try to become a functioning member of adult society, albeit one with no work experience and an off-limits past. Garfield is tremendous as the uncertain young man trying to cope in a world he doesn't understand, and Scottish actor Peter Mullan is even better as his parole officer. This premiered last fall at Toronto and has played several other festivals, but generated its biggest audience buzz at Tribeca. Likely to see theatrical release in the United States this summer.

"Eden" This unassuming but powerful drama about a crumbling marriage in a small Irish town hasn't been picked up for U.S. release, as far as I know, but that's likely to change. Eileen Walsh won the Tribeca best-actress award for her riveting performance as Breda, a young wife and mother starved for love, sex and attention whose husband, Billy (Aidan Kelly), spends every night in the pub boozing with his mates and eyeing the young lovelies. Based on Eugene O'Brien's play and directed by Declan Recks, this is a heartbreaking portrait of a newly affluent society (no dour priests or shawl-wrapped women to be seen!) experiencing a midlife crisis. From the producers of "Once."

"Fermat's Room" I haven't seen this reportedly intriguing puzzle-thriller from the Spanish writing-directing team of Luis Piedrahita and Rodrigo Sopeña, but it quickly became one of Tribeca's audience-pleasers, and IFC promptly snapped it up for its customary combination of theatrical and pay-per-view release. Four mathematicians who don't know each other are summoned to a secret room to solve an unsolved problem (my math-minded friends tell me it's called Goldbach's conjecture). But the room is itself a trap, wouldn't you know, and the real problem they face is that of who's trying to kill them and how they can stop it.

"Let the Right One In" Like a lot of second-tier film festivals, Tribeca is arguably a better venue for genre films than for mainstream, serious-minded indies, and there's no better example than Swedish director Tomas Alfredson's teenage-vampire film, which won the festival's grand prize for narrative features. "Let the Right One In," adapted by writer John Ajvide Lindqvist from his own novel, is no heedless splatterfest, mind you; like so many vampire movies, it's an allegory. Our hero is teen outcast Oskar (Kåre Hedebrant), who may find some measure of redemption and acceptance through his hot, if rather strange, new girlfriend Eli (Lina Leandersson). So what if she's hundreds of years old and has a familiar who must bring her fresh blood every so often? To say more would be unfair. No U.S. theatrical release has been announced; I just hope the distributors are smart enough not to go straight to DVD with this one.

"Man on Wire" I've already raved about James Marsh's delightful and finally transcendent documentary about Philippe Petit, the wire-walker who took a 45-minute stroll between the towers of New York's World Trade Center in 1974. "Man on Wire" was in no way a Tribeca discovery; it premiered at Sundance and was widely acclaimed there as one of the year's best docs. But its New York premiere was, for me, the single electrifying, only-in-Manhattan moment Tribeca had to offer this year. (Theatrical release will follow in August.)

"My Marlon and Brando" An immensely likable heroine, an irresistible true-life love story, and a slow-motion Kafkaesque travelogue through the dusty Kurdish borderlands between Turkey, Iran and Iraq go with the puzzling title of Turkish director Hüseyin Karabey's intimate docudrama, which isn't quite like anything else you'll see this year (or ever). The lovers are Turkish actress Ayça Damgaci, a zaftig, outspoken, opinionated hellion, and Iraqi Kurd actor Hama Ali Kahn, a former heartthrob (once Iraqi TV's Superman) now in late middle age. (They're playing themselves, but Karabey's film also has fictional elements.) Separated by the closed Turkey-Iraq border as the 2003 war begins, the two send each other letters and videotapes in hilariously fractured English, and Damgaci embarks on a foolish and dangerous mission to defy both George Bush and Islamic militants and find her man.

"My Winnipeg" Canadian director Guy Maddin's approach to filmmaking borders on crackpot territory -- he makes black-and-white silents with narration and music, more or less as if the technology were permanently frozen in the late 1920s -- but the man himself is amazingly normal and productive, having churned out more than 30 features, shorts and documentaries in a 20-year career. "My Winnipeg" doesn't break much new ground for Maddin, continuing in the quasi-psycho-autobiographical vein of "Brand Upon the Brain!" (there is once again a character named Guy Maddin, and the real Maddin narrates the film), but this tongue-in-cheek "docu-fantasia" about the hold his snowbound Manitoba hometown has over him is weird, winning and hilarious. (Will be released by IFC later this year.)

"Pray the Devil Back to Hell" Tribeca's top documentary prize went to Gini Reticker's appealing film about the unusual coalition of Christian and Muslim women in Liberia whose dedicated, grass-roots activism helped bring down the corrupt dictatorship of Charles Taylor and return the nation to democracy. Given that last year's doc prize at Tribeca went to Alex Gibney's harrowing "Taxi to the Dark Side," which went on to win an Oscar, Reticker's inspirational tale is bound to get a close look from people in the business. More important, Tribeca screenings were packed, and audiences seemed delighted to find a serious, well-made film with an uplifting ending.

"The Secret of the Grain" It became a conversation I heard several times at Tribeca: "How did you feel about the couscous movie?" Some viewers lost patience with the extended family-dinner scenes in Tunisian-French director Abdellatif Kechiche's 150-minute saga about a family of North African immigrants and their children. For others, Kechiche's rigorous attention to the daily rituals of life were a fully absorbing experience, and "The Secret of the Grain" is a masterpiece by the successor to Ozu. (I'm pretty close to the latter camp, personally, but we'll talk about that later.) Fine performances by Habib Houfares as an aging patriarch and Hafsia Herzi as his mistress' French-born daughter anchor a rich ensemble of characters. You'll soon get to make up your own mind; despite the evident difficulties of marketing a film this long with Arab-European subject matter, IFC had acquired U.S. rights to "Secret of the Grain" before its first Tribeca screening was over.

"The Wackness" Writer-director Jonathan Levine's coming-of-age tale set in mid-'90s, Giuliani-era Manhattan came out of Sundance already marked as a potential indie hit. But every Tribeca screening was packed and boisterous, and the picture's hometown mojo was clearly explosive. In case you've avoided the hype until now, this is the movie with Josh Peck as a teenage drug dealer and Ben Kingsley as his shrink (and his best customer). Olivia Thirlby is the love interest, with supporting roles for Famke Janssen, Mary-Kate Olsen and Method Man. Yeah, it's that kind of movie, but I'll save the commentary for another time. Sony Pictures Classics will release in July.