A pivotal day for the Democrats?

As Indiana and North Carolina head to the polls, a couple of predictions: The delegate endgame will change -- and nobody can be sure what's next. 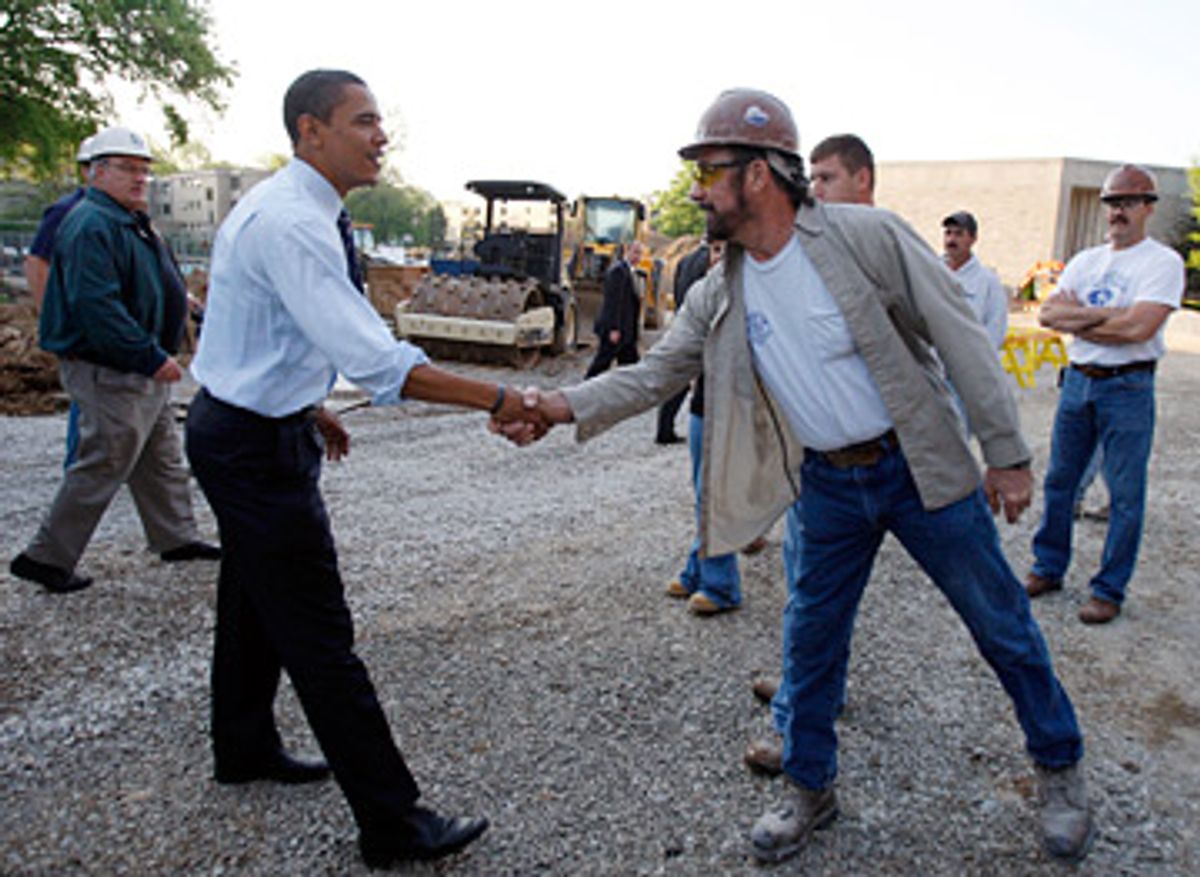 The Monday lunch rush was beginning to ebb at Shapiro's Delicatessen -- the 103-year-old Hoosier temple to you-only-live-once dietary habits -- but the aroma of politics lingered in the air along with whiffs of corned beef and sauerkraut. At the Formica table where fourth-generation owner Brian Shapiro presided, the talk was of indecision between Barack Obama and Hillary Clinton in Tuesday's primary. "This is a state that hates change," Shapiro said, speaking of Indiana generally, though there might be an embedded message here for change-agent Barack Obama. "We'd sooner pull teeth than let change happen."

(We interrupt the flow of this article for a disclaimer required by all USDA-certified journalism schools: The author, aka Walter Shapiro, has no known family connections with Brian Shapiro or Shapiro's Deli, but he did purchase a souvenir cap and T-shirt emblazoned with the name of the noshery.)

Political conversations in Indiana currently, like the one at Shapiro's, are all predicated on a common assumption -- that the choices voters make in the primary matter. They do not regard Indiana's first meaningful Democratic presidential contest in 40 years as a rigged wrestling match where the outcome was preordained long before they bought their tickets. Their outlook is in contrast to the rigid numerical determinists like Slate's Tim Noah who believe that the curtain should be dropped on Hillary Clinton's fairy-tale dreams of nomination. An exasperated Obama aide sounded the same note over the weekend when he asked, "Why do the media keep pretending that the race has not been decided?"

The simplest answer is that this is a political season that should encourage humility in jumping ahead of the story line to proclaim the obvious conclusion. Think of John McCain's miraculous resurrection and the cloak of inevitability that was once draped around Clinton's own shoulders. (Modesty normally would prevent citing a certain prescient Oct. 16, 2007, Salon article titled "How Hillary Could Tank.") In fact, the safest wager in politics is probably to bet the mortgage money against the Conventional Wisdom.

What if Clinton won Indiana and came close to an upset victory in North Carolina tomorrow? What if she swept West Virginia (May 13) and racked a huge margin in Kentucky (May 20) while running even in Oregon (also May 20)? In Monday's New York Times Rhodes Cook plays with some of these scenarios to suggest how Clinton could emerge June 3 as the ultimate popular-vote winner in the primaries, even without counting Puerto Rico or the disputed contests in Michigan and Florida.

Another factor that the hit-the-road-Hillary fanciers forget is that the magic number of 2,025 delegates for a majority was not handed down on stone tablets to the Democratic National Committee. That number was derived after eliminating the 366 delegates from Michigan and Florida because those states held January primaries in defiance of DNC rules on scheduling. But there is an appeal pending before the DNC's Rules and Bylaw Committee to restore the 51 superdelegates from Michigan and Florida. If that is approved -- even if there is no other resolution to the Michigan and Florida fracas -- the number for nomination would jump to 2,051.

The point here is neither to reward Michigan and Florida for jumping the queue by holding outlaw primaries nor to accept the Clinton campaign's absurd claims that the results from these two states should be ratified without question. But it defies reason (of course, we are talking about the Democrats) that there will not be some negotiated settlement to the Florida and Michigan mess, which would raise the number of delegates required for a majority. So here is a surefire prediction: The number flashing on the TV screens when the nominee goes over the top at the Denver convention will not be 2,025.

But there is a larger question: Would the Democratic Party nominate Barack Obama if most delegates to the convention concluded that he would be a significantly weaker candidate than Hillary Clinton in the general election? While Clinton partisans may parse poll data to reach that conclusion, there is no current evidence that would convince a neutral Democrat that Obama is a synonym for Mondale. But what if Clinton roared through the remaining dribs-and-drabs on the primary calendar? What if the conviction began to set in among Democrats that Obama cannot win in November, even as he was on the verge of wrapping up the nomination based mostly on delegates that he acquired in January and February?

The answer to these what-if questions may well be "Obama forever -- and damn the consequences." Even though, in theory, all convention delegates are free agents (elected delegates are as free from legal constraint as superdelegates in terms of changing their allegiance), there will be a built-in timidity to challenge the purported verdict of the voters. There are also the obvious electoral fears about how the rejection of Obama at the convention would be received by African-American and younger voters. But, despite these considerations, the Democrats -- unable to imagine life with a Republican in the White House for four more years -- might at that point abandon Obama as too much of a dice-roll presidential candidate for a party on the brink.

Make no mistake: Obama remains the odds-on favorite for the nomination. And at the moment, Clinton too looks like a problematic general-election candidate based on her negative attributes in the polls. But we are not yet at the gimme-putt phase of the Democratic contest. It is not a media conspiracy that the Democratic nomination is still up for grabs. Instead, as we await the last major primary night of the 2008 season, it is a reflection of that awkward thing called reality to argue that Obama is still a few rounds away from being crowned champion.