Clinton: "I am in this race"

Protesters disrupt her fundraiser, money is dwindling -- and undecided superdelegates tell Salon they see the end in sight. But Hillary Clinton powers on. 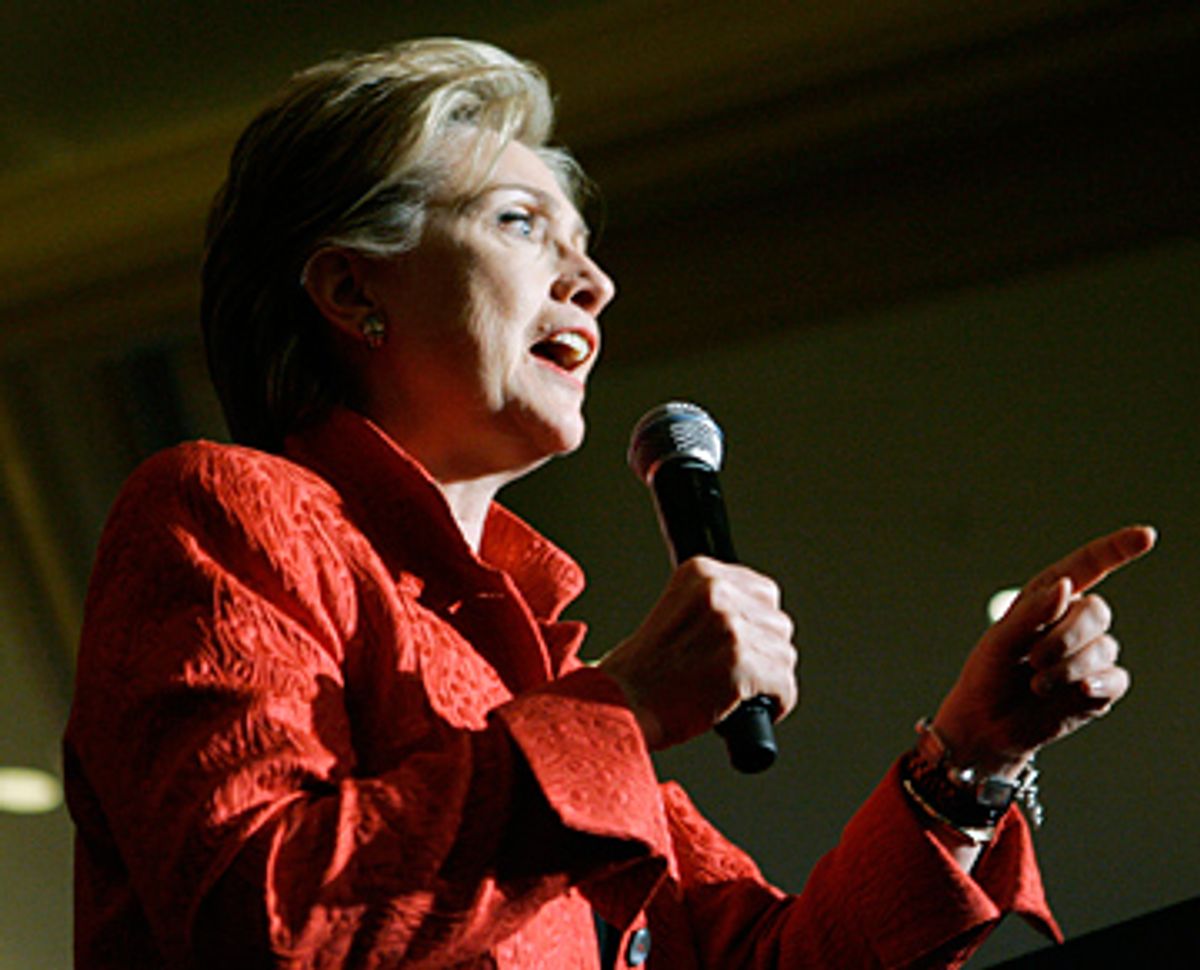 Before Hillary Clinton could even begin her speech at a $1 million fundraiser in a packed hotel ballroom here Wednesday night, a protester stood up on a table in front of her, waving a banner demanding that she apologize for promising to "obliterate" Iran if one day it nuked Israel.

You know you're having a bad week if you can't even guarantee a friendly crowd by charging $250 (and up) to hear you speak. But Clinton barely blinked as the Secret Service and hotel security dragged the man out of the room. "Well, I certainly hope he didn't step on any of the cookies," she said. When a woman stood up a few minutes later flashing peace signs with both hands and yelling about Iran, Clinton still wasn't fazed. "I hope they paid to come," she said.

A day after Clinton was routed in North Carolina's primary by Barack Obama, and barely eked out an Indiana victory to balance it, nothing could make her flinch as she dug in and promised that the never-ending campaign would continue. Not the delegate count, despite her being only a few contests shy of mathematical elimination from winning a majority of pledged delegates at the Democratic Convention. Not the media, which was eager to declare Obama the nominee after Clinton missed her last real chance to cut into his lead on Tuesday night. Not the defection of some prominent supporters and the steady trickle of uncommitted superdelegates to Obama on Wednesday.

Instead, Clinton and her campaign chugged along -- focusing on the next contest in West Virginia on Tuesday -- and insisting, as they have for months, that she's not only a viable candidate for president, but she's the best one. Clinton even added campaign events to her schedule Wednesday, logging a few hundred more miles on the trail to demonstrate her refusal to quit. Aides sent an e-mail at 3:42 a.m., only a few hours after most networks had declared her the winner in Indiana, announcing that Clinton would join her daughter, Chelsea, at a rally in West Virginia. "I'm staying in this race until there's a nominee, and I obviously am going to work as hard as I can to become that nominee," she said after the rally. "It's still early."

By almost all measures, that is not really the case. And perhaps most dangerous for Clinton now is the fact that a number of superdelegates -- whom she needs to win over in large numbers to have any chance to emerge the victor -- are losing patience. West Virginia Democratic Party chairman Nick Casey told Salon in a phone interview Wednesday that he wouldn't be surprised if Clinton pulled the plug on her campaign before Tuesday. Some of his colleagues in other states sounded ready for things to wrap up, too. "We can pretty much see what the primary outcome will most likely yield," Don Bivens, the Arizona Democratic Party chairman, said in an e-mail. Bivens has been neutral so far, but said he might endorse sooner than he had planned to before this week. Sen. Dianne Feinstein of California, a Clinton supporter, said she wanted to hear how Clinton planned to continue the race without causing "negative dividends."

Not every uncommitted superdelegate feels that way. In Oregon, which votes May 20 (and where Obama's campaign expects him to clinch a majority of the pledged delegates), party chairwoman Meredith Wood Smith would like to see the race go on a little while longer -- say, maybe another two weeks? "I'd like to see the campaign go through May 20, because we have folks so excited out here," she said. "This is the first time in 40 years this state gets to play."

There are only six primaries left, and they'll award 217 delegates -- meaning more than 93 percent of the pledged delegates to the convention have already been won. Because the Democrats award delegates proportionally, Clinton would have to win the remaining contests with margins over 90 percent (practically impossible) to catch Obama. And the massive turnout behind Obama's big win in North Carolina means Clinton might still trail him in the popular vote even if the disputed election tallies in Michigan and Florida are counted. There may be months left before the convention, but even some of Clinton's most dogged supporters said Wednesday that the race is likely to be wrapped up in June, not long after the final primary.

Nevertheless, Clinton stayed in full "damn the torpedoes" mode Wednesday. "I am in this race," she said. "I am staying in this race."

Her supporters were right behind her. "If the Democrats nominate Hillary Clinton, she'll beat John McCain and we'll take back the White House," said Ricki Lieberman, a New Yorker who has been traveling around the country volunteering for Clinton since before the Iowa caucuses. "If the Democrats nominate Barack Obama, then we know we'll lose." Lieberman couldn't say exactly what process would let Clinton emerge with the nomination, but she was certain her logic was compelling, and that was the bottom line. "If people stop and think a minute, then she has an excellent chance."

One thing that could force Clinton out before the voting ends is her bleak financial situation. Campaign aides admitted Wednesday (after trying to dodge the question while the Indiana and North Carolina results were still unknown) that she had loaned another $6.4 million over the last few weeks. That included $425,000 on the day before the election, presumably because some bills came due for her share of the televised back-and-forth with Obama over a proposed gas tax holiday.

The fundraiser Wednesday raised some much-needed cash, but many of Clinton's reliable donors have already given the maximum that federal law allows them to give. That she's even still in the race at all now is mostly due to Internet fundraising. Though Obama has raised far more money, both overall and in small online contributions, Clinton's supporters chipped in $15 million online in March and $30 million online in February. April figures aren't available yet, but aides say Clinton raised $10 million the day after the Pennsylvania primary alone. While many of the Democratic Party's influential bloggers and passionate online activists support Obama, Clinton would have already gone broke if not for her own Internet support. (One of the ironies of this year's campaign is that the Web -- which helped Obama topple Clinton when she was the front-runner -- is now keeping her campaign afloat.)

Regardless of money concerns, Clinton and her closest aides and allies are staying focused on the near-term game. When her daughter, Chelsea, was asked at the fundraiser whether she planned a White House wedding (if she gets married, and if Clinton wins), she laughed nervously. "I don't know when a wedding would take place, and I certainly can't see past next Tuesday in West Virginia," Chelsea said.

Playing it a day at a time, focusing only on staying alive through the next contest, has worked for the Clinton campaign for weeks. But sooner rather than later they may look up and see that time is fast running out.