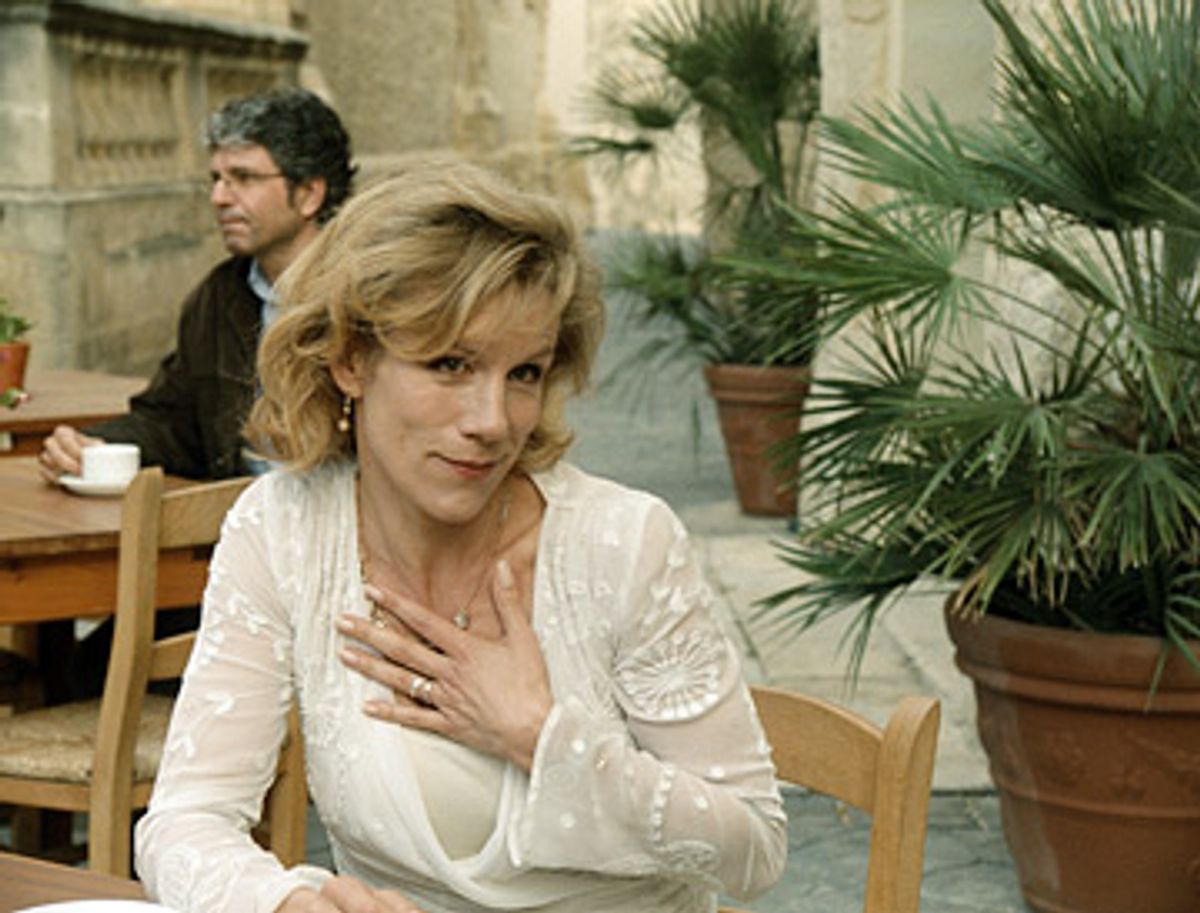 Julia (Juliet Stevenson) at a Malta café in "A Previous Engagement."

"A Previous Engagement" begins with such an aggressive onslaught of madcap farce, painful '60s singer-songwriter pop and picturesque Maltese scenery that I nearly bailed out after six or seven minutes. The only reason I didn't turned out to be an awfully good one: horsey, gawky English character actress Juliet Stevenson as a vacationing married woman who scrutinizes herself in the mirror and utters the film's first word of dialogue: "Fuck!"

I'm not big on those Pauline Kael-style encomiums to great actors in mediocre material, but that's exactly what we've got here. Stevenson is so incandescent -- so funny, so vulnerable, so awkwardly sexy -- in her role here as Julia Reynolds, a married woman from Seattle who's returned to Malta to fulfill a 25-year-old promise to meet her former lover, that she lifts writer-director Joan Carr-Wiggin's ordinary middle-aged rom-com above all its abundant clichés. (Stevenson's long and varied career goes back to playing Antigone for British TV in the early '80s; more recently, she's appeared in "Bend It Like Beckham," "Nicholas Nickleby" and "Being Julia.") Every scene Stevenson is in she commands, even more so because she plays Julia as a woman adrift in a sea of yearning and uncertainty, a bottomless fount of stammered double-takes, deer-in-headlights epiphanies and enraged zingers. Every time she says "fuck" -- and she says it a lot -- it's really funny. I have no idea why.

Julia has dragged her jigsaw puzzle-loving, insurance executive husband, Jack (Daniel Stern), along for a two-week vacation in a Mediterranean villa, neglecting to mention that her real agenda involves a long-planned reconnoiter with Alex Belmont (veteran Turkish-French actor Tchéky Karyo), the Continental dreamboat ex-revolutionary she left behind a quarter-century earlier. Karyo certainly looks the part of virile, gray-haired sex-lion, but he can't keep up with Stevenson as a comic force, and the fact that he's playing a nonspecific Euro-lover-man literary lefty called Alex Belmont tells you exactly what universe this movie inhabits (i.e., a more cultured sub-universe of the Lifetime Movie Channel, whither this film is surely bound).

The jokes about Julia's lame-ass husband and equally lame-ass adult daughters are broad, and her romantic predicament is beyond screwball comedy and well into goofball. She and Alex end up hiding under the bed with her whole family in the room; she and Jack end up in a cocktail foursome where they pretend not to be married, en route to going home with other people. As silly as the plot is -- and as grating as that boomer-lounge-music soundtrack gets -- "A Previous Engagement" got under my skin. Perhaps you've noticed that there aren't many parts like this lying around for actresses over 50, and Stevenson by-God gets her fangs into this one, imbuing Julia with a ferocious blend of anxiety, sexual longing and wiry, tensile strength. If any significant population of adult women get to see this movie, she's going to have a second career as a cult leader in front of her.

Furthermore, as the film progresses Stevenson seems less like a scene-stealing diva and more like a source of heat and light for the other actors. As if basking in her glow, both Stern and the wooden Karyo seem to warm up as the story progresses, and Derek Riddell (as a stoical hotel desk clerk) and Valerie Mahaffey (as a vivacious redhead divorcée) offer delicious moments of comic counterpoint. There's gratuitous semi-sexy salsa dancing towards the end of the movie, and a final, semi-coherent switchback that arrives when Julia gets high on the beach with a random punk kid who's young enough to be her son. Still, hey, there are plenty of self-help prescriptions dumber than that one.

"A Previous Engagement" opens May 9 in New York and Los Angeles, with wider release to follow.