Building a road from Bollywood to dullsville

How can a gorgeous-looking movie about an adulterous interracial affair in 1930s India be so boring? Plus: The amazing Juliet Stevenson, sex symbol at age 51. 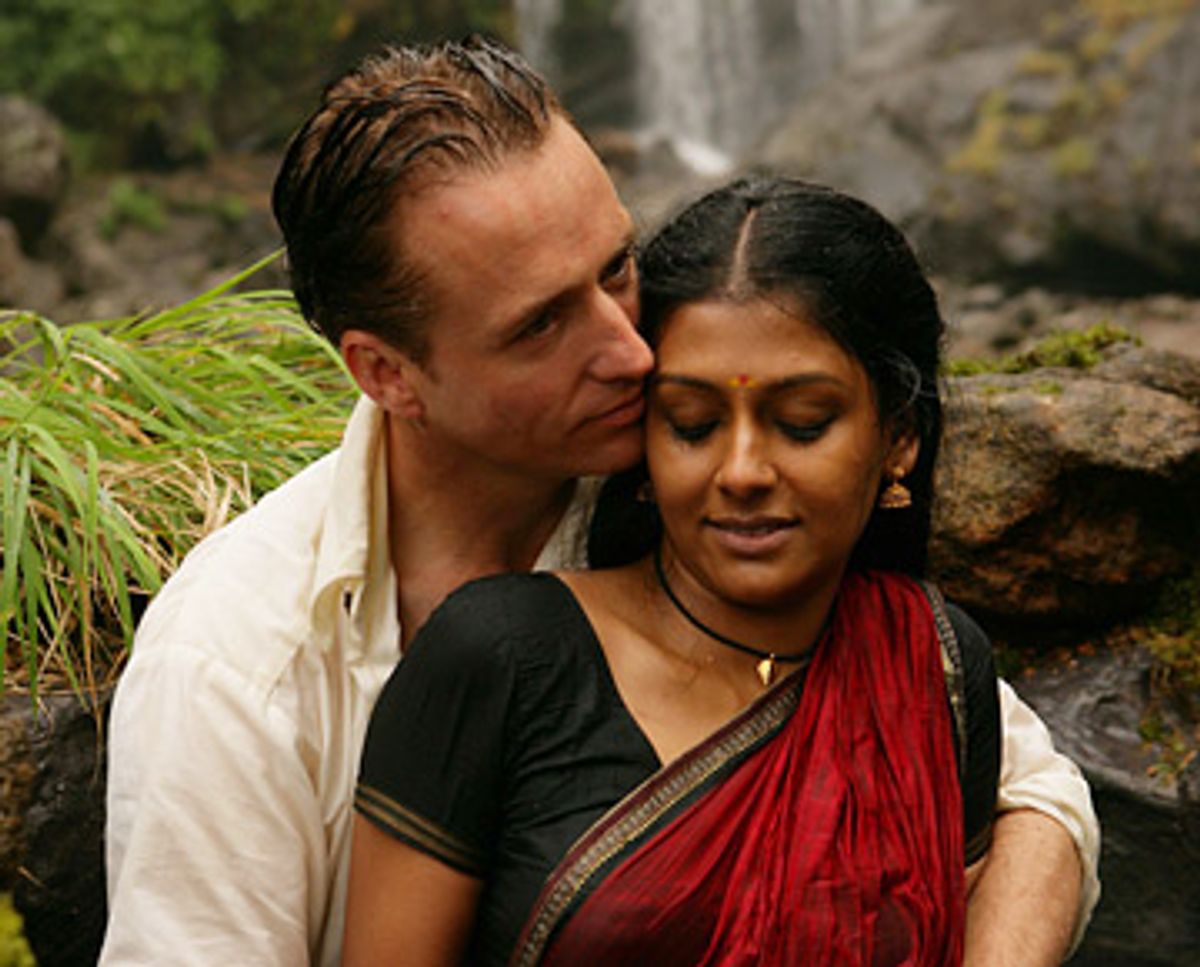 Linus Roache and Nandita Das in "Before The Rains."

It must have sounded like a good idea to somebody, sometime, to hire an actual Indian filmmaker -- Santosh Sivan, director of 1999's "The Terrorist" and the 2001 historical epic "Asoka the Great" -- to make one of those English-people-in-hot-weather, Merchant Ivory-style costume potboilers set in India. What we get instead in Sivan's "Before the Rains" is a perfectly matched combo of Western exoticism at its most dull-witted and Bollywood filmmaking at its most superficial. The story sounds great, on paper: It's got interracial romance and betrayal, political and ethnic violence, and a faint feminist undercurrent. But the resulting movie is so pretty and so utterly lifeless you can almost smell the embalming fluid coming off the screen.

"Before the Rains" actually is a Merchant Ivory production, but I don't know what the hell that means, given that Ismail Merchant died in 2005 and James Ivory had nothing to do with making this movie. What I can tell you is that the genuine articles, meaning such quasi-imperialist Merchant Ivory classics as "Shakespeare-Wallah," "Bombay Talkie" and "Heat and Dust," look like the collected works of Welles and Renoir compared to the confectionery boredom of "Before the Rains." (I'll come out of the closet right now and admit to liking quite a few of the Merchant-Ivory-Ruth Prawer Jhabvala collaborations, and if that gets me kicked out of the film-snob cult as a middlebrow, so be it.)

In what ought to be the picture's star turn, Linus Roache plays an arrogant British spice baron named Henry Moores, whose foolhardy attempt to build a road through the mountains of southern India is matched by his adulterous affair with Sajani (Nandita Das), a beautiful Indian servant married to an abusive villager. It's the late 1930s, and Moores' road-building campaign, like his sexual adventure, is going to run head-on into India's burgeoning independence movement and rising anti-British sentiment. Das is charming in a highly circumscribed role, but Roache appears monumentally bored by the material, drifting through Sivan's lovely and meaningless frames like a guy following his girlfriend through the mall.

When Moores' wife (Jennifer Ehle) comes back from a long trip to England, the unexpressed sexual tensions within the triangle briefly threaten to bring the movie to life. But Sivan never misses an opportunity to draw your attention away from the characters to his meticulous, picturesque images of mountain and jungle, river and village. It's conventional to compare this kind of movie to National Geographic, but that magazine's photography hasn't looked this artificial since at least the 1960s. During the chaste, concealed-by-vegetation love scenes between Moores and Sajani, I kept waiting for a giant bottle of cologne to float past in the foreground, perhaps carried by locals in loincloths and body paint. When the affair is discovered everything goes to hell, of course, but I remember the phony gorgeousness and tasteful world-music soundtrack much better than the story. If a white person had directed this movie, it would be deemed neocolonialist claptrap.

"Before the Rains" opens May 9 in New York and Los Angeles; May 16 in Boston, Chicago, Dallas, Denver, Philadelphia, Pittsburgh, San Diego, San Francisco, Washington and San Jose, Calif.; and May 23 in Atlanta, Detroit, Houston, Indianapolis and St. Louis, with more cities to follow.

Beyond The Multiplex India Movies