"What Happens in Vegas" 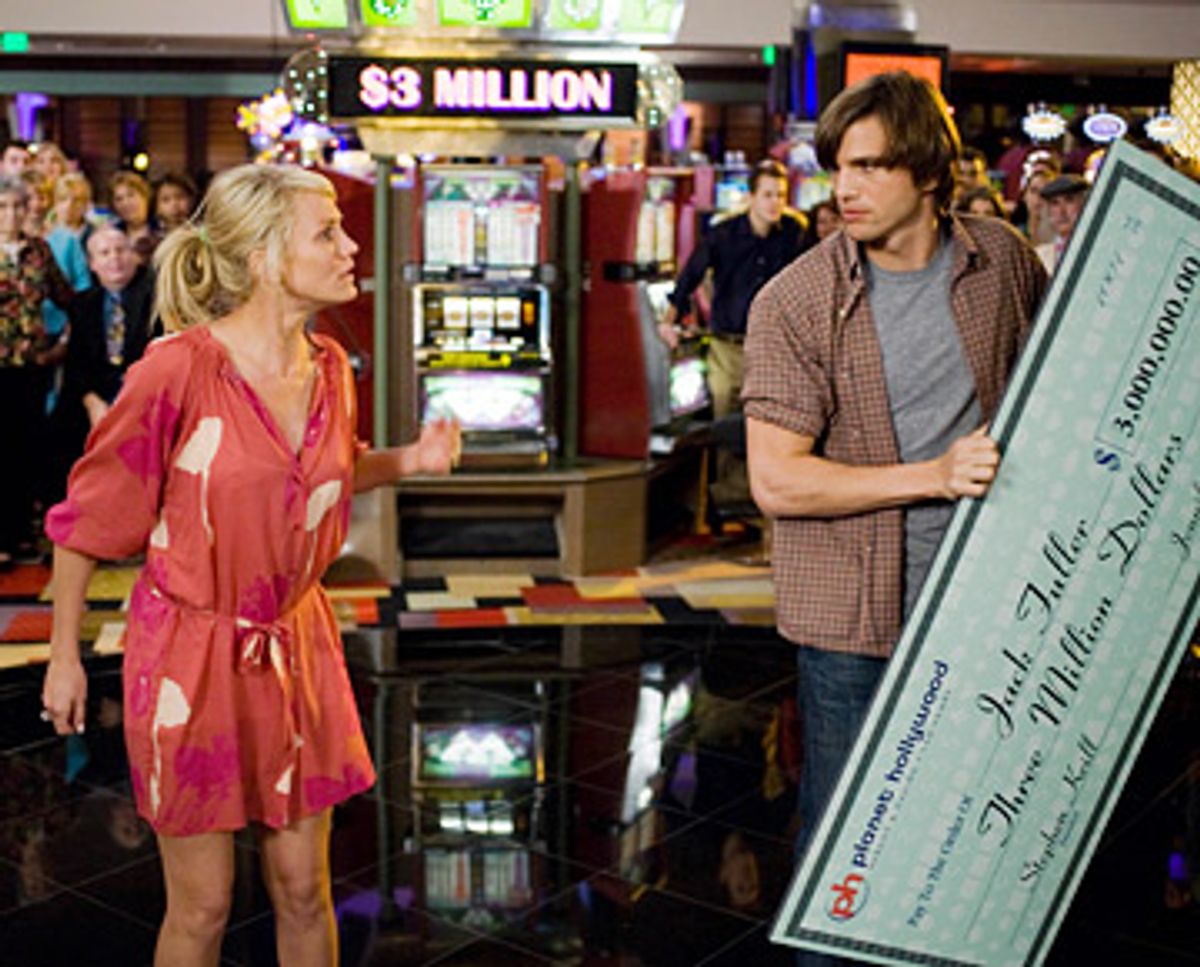 Ah, Vegas -- the geographic manifestation of the collective id. It's the turpitude-soaked, neon-lit supporting star of countless films, from "Swingers" to "Ocean's 11" to "Showgirls." You want easy storytelling shorthand for drunken mistake-making? Just drop your protagonists off somewhere around the Bellagio, and the thing practically writes itself. Despite a script credited to Dana Fox, "What Happens in Vegas," in fact, may very well have written itself. With its stockpile of amicable, unchallenging characters, easily resolved situations and sitcomic one-liners, it certainly doesn't appear to have sprung from anything resembling the human imagination.

Jack (Ashton Kutcher) is a slovenly Brooklyn layabout. Joy (Cameron Diaz), meanwhile, is a Wall Street trader who works 80 hours a week and "makes plans to make plans." Early in the film, Jack is canned from his carpentry job by his own dad (Treat Williams) and Joy is dumped by her fiancé (Jason Sudeikis) in front of all their friends, prompting both to beeline to Sin City for some healing Cirque du Soliel and Big Gulp-size libations.

When a computer mix-up puts them in the same room (a plot device pioneered by "The Love Boat"), they wind up sharing an evening of such unbridled revelry that Joy awakens the next day with a dice-shaped souvenir ring wrapped around her most symbolically significant finger. After an awkward, hung-over breakfast, Jack and Joy tensely agree on their mutual unsuitability, and part ways. But first, Jack impulsively plunks Joy's quarter in a slot machine, prompting a $3 million windfall and a dispute over the winnings. And what other outcome could the Hollywood-manufactured justice system devise but to have a judge sentence the bickering newlyweds to six months of "hard marriage," forcing them to try to work it out as husband and wife?

What follows, of course, is yet another battle royale of the sexes, wherein Jack and Joy scheme, steal, seduce and gross each other out in their attempts to make somebody fold first, all while slowly growing ever more beguiled. When Diaz and Kutcher are racing each other down the street or drunk-dancing as their characters pratfall in love, they have an easy, clowny chemistry that almost passes for pleasurable. The two are well-matched physical comedians. Where the film falls apart is just about everywhere else.

While Kutcher is reliably believable as a rumpled yet fun-loving slacker, Diaz is considerably less convincing as a steely, MBA-enhanced powerhouse. She may have the jittery energy of a woman who's a stranger to sleep, but with her giggly hair flips, smeary lip gloss and neon-bright micro skirts, she looks more like a party girl staggering home at dawn than a would-be titan of the stock market.

The supporting players all perform adequately in their thanklessly underwritten roles. Lake Bell, as Joy's wisecracking, anger-prone best friend, channels Amanda Peet to an eerie extent, while Rob Corddry, as Jack's buddy and lawyer, manages to incite giggles with each well-timed arch of the eyebrow but can't redeem his one-note doofball chracter. The rest of the characters are similarly archetypal, with names seemingly dreamed up by a team of 11-year-old boys: Dennis Miller is Judge Whopper; Queen Latifah is a marriage counselor named Twitchell; and Dennis Farina, as Joy's sexist, slave-driving boss, is Richard Banger. Really.

What disappoints most about "What Happens in Vegas" is how Harlequin Romance treacly it is. When they're not peeing in the sink or pummeling each other with fruit, Jack and Joy let their guards down enough to spout epiphanies about love and risk. They've both been, in their own ways, disastrously disappointed in their careers and their relationships, which leads them to make skin-crawling admissions about their own feelings of inadequacy -- and worse, to repeat them.

Considering this movie alongside last winter's "27 Dresses and the recent "Made of Honor," it would seem that, while America may be headed to food and gas shortages, we do not lack for wedding-based romantic comedies. Is there truly that great a need for tales involving commitment-phobic quasi-bad boys tamed to walk down the aisle? I'm all for romance: If it involves Ashton Kutcher taking his shirt off, a lot, so much the better. But a comedy that deals in Dr. Phil-level admissions that "if you stop betting, you never have to lose" is a movie that reaches near-nuclear levels of ickiness.

That our dueling, ridiculously good-looking leads will eventually discover that they're perfect for each other is a fait accompli before the first frame. The inevitability of a comedy's trajectory can be a big part of the fun. Had "What Happens in Vegas" allowed itself to embrace a little more of its namesake city's loose, sloppy zeal for bad taste and good times, it might well have been more appealing. As it is, it's too restrained, too often -- too eager to gallop toward postcard sunsets on the beach when tequila shooters and lap dances are what the moment calls for. You'd think the combination of Diaz, Kutcher and Vegas would be good for at least a little sexy, silly fun. But don't bet on it.