If she hasn't already quit, it's hard to envision Clinton continuing her unwinnable -- even with Florida and Michigan -- battle beyond June 4. 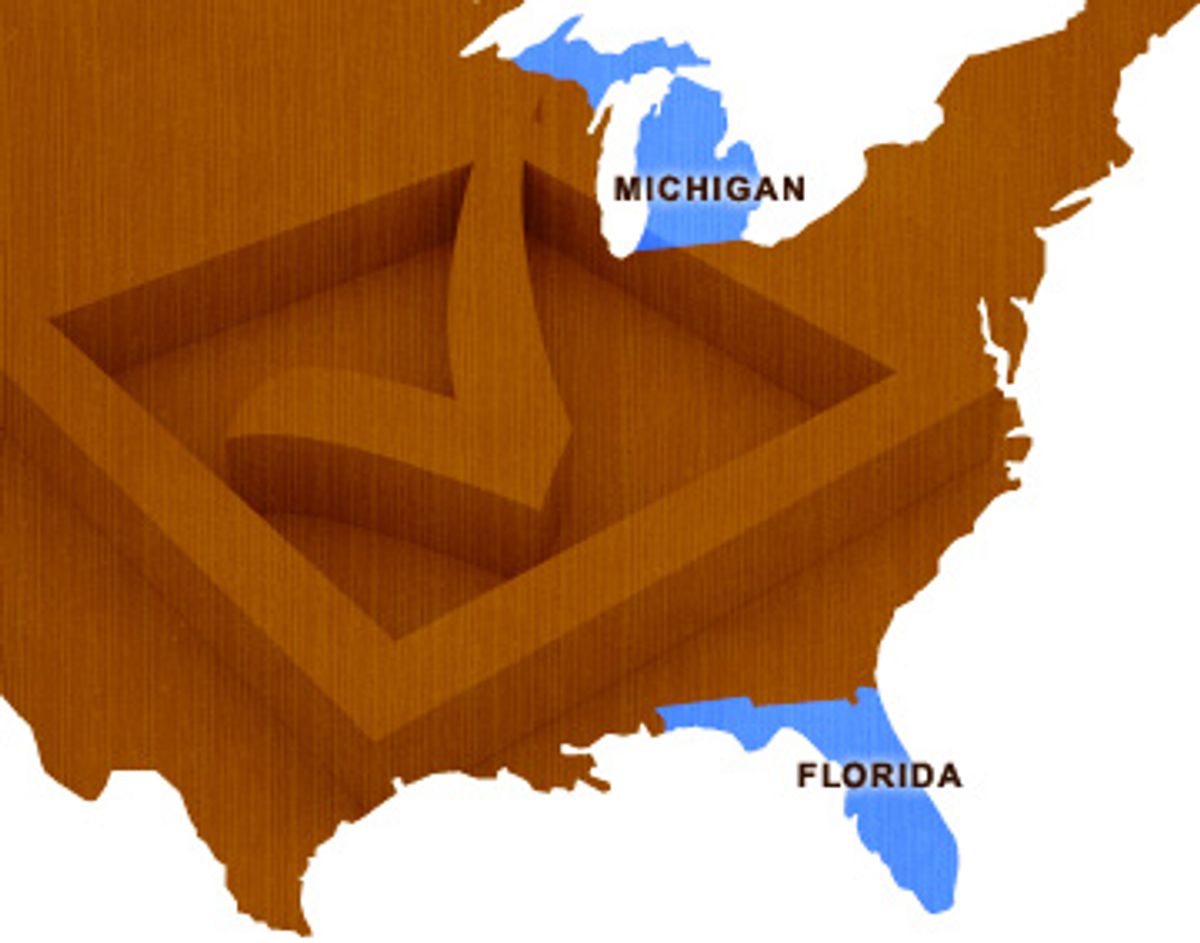 Despite evidence to the contrary, Hillary and Bill Clinton do indeed know the meaning of the word "quit." The problem is that they exclusively define it (courtesy of Webster's Third International Dictionary) as "any of various small passerine birds chiefly of the West Indies." So if Hillary is asked any ornithological questions during the run-up to the June 1 Puerto Rican primary, she will happily talk about quits. Otherwise, the topic is off the table -- at least for the moment.

The New York senator has obviously reached the death-with-dignity phase of her 2008 ambitions. Normally in presidential politics three types of shortages drive a candidate out of a hopeless race -- a lack of press coverage, money and prominent supporters willing to keep on spinning and sowing. But, as Barack Obama is learning with each passing day, none of the usual rules apply while waiting for Hillary to hoist the white flag.

The Clintons on the downslide remain a riveting psychodrama, so the press pack is unlikely to abandon them to speculate about President Obama's would-be secretary of agriculture. Having already invested (or squandered) $11 million on the campaign, Hillary and her ne'er-do-well husband have another $98 million to go before they tap out. And after eight years in the White House, the Clintons have acquired enough loyalists like campaign chairman Terry McAuliffe (who appeared Sunday on "Meet the Press" and "Face the Nation") to dutifully go through the motions on her behalf on national television.

So what will it take for Obama to finally be allowed to celebrate the triumph of hope over experience?

Clinton's dreamscape has been reduced to the kind of defy-the-odds optimism of hardcore lottery-ticket investors who actually believe the TV ads that claim, "All you need is a dollar and dream." In all likelihood, the only thing that could possibly save Clinton at this point is an out-of-nowhere Obama scandal like the revelation that his minister before Jeremiah Wright was Jerry Falwell. The best argument that McAuliffe could muster on "Meet the Press" was: "By the end of this process, I believe we will be ahead in the popular vote. I believe that within the delegates it will be within 100."

The popular vote argument is plausible, albeit with a bit of ignore-this-but-count-that finagling. If you include the results from the queue-jumping Florida primary but ignore Michigan (where Obama was not on the ballot), Clinton is currently behind in the popular vote from the primaries by 441,000. A landslide for Hillary in Puerto Rico -- coupled with high turnout (2 million voters cast ballots for governor in 2004) -- could by itself undermine Obama's popular-vote claims. Of course, a wrangle over the symbolic significance of toting up the primary vote from an island that is not permitted to vote for president in November could cause problems for a party that already is facing fault lines over race and gender.

But the delegate count is what creates Mission Impossible. The math is more daunting for Clinton than it is for a high-schooler who has slept through calculus class all year and has belatedly decided to crack open the textbook the night before the final exam. Most media scorecards give Obama about a 170-delegate lead with flocks of superdelegates signing on before the boarding doors close for takeoff. Even the most optimistic Hillary scenario of landslide 2-to-1 victories in West Virginia (May 13), Kentucky (May 20) and Puerto Rico -- coupled with even splits in Oregon (May 20), South Dakota (June 3) and Montana (ditto) -- would narrow Obama's lead by just 46 delegates, according to the Slate delegate counter.

The Clinton campaign has been arguing for months that the outlaw January primaries in Michigan and Florida -- both conducted in defiance of Democratic National Committee rules -- should count. Imagine, for the sake of argument, that the Clinton team employs magical powers to cloud minds when the DNC's Rules and Bylaws Committee convenes May 31. Even then, if the DNC implausibly dropped all its sanctions, Clinton would gain a 56-delegate advantage, 38 from Florida and 18 from Michigan.

That is right. If all the stars align for Hillary, if the DNC -- despite expectations -- rushes to do her bidding, she would still come out of the primaries about 70 delegates behind Obama. By the way, that is not a best-case forecast -- that is more like a Beverly Hillbillies hit-oil-in-your-backyard scenario. Even if (ha!) all that were to happen (and the new number for nomination were 2,209), Clinton would still have to corral more than 60 percent of the remaining 300 up-for-grabs superdelegates (including those from Michigan and Florida) to win the nomination by one vote.

While everyone outside the Clinton family (and that is making impossible-to-verify assumptions about Chelsea) knows how the Democratic donnybrook will end, almost no one has a confident theory about when it will end. Part of the uncertainty reflects the enduring mystery that has animated that academic discipline called Hillary Studies for the last 15 years: What motivates her? Is it ambition, pride, feminism, vindication, public service or ideology? Or is it some combination of all of them? Here is how the what-does-Clinton-want questions might play out against the dwindling days on the Democratic calendar.

May 13: The West Virginia primary Tuesday night represents Clinton's first opportunity to go out on a high note with the audience singing the title tune. This could be her biggest primary victory since Feb. 5 when she carried her semi-home state of Arkansas with 70 percent of the vote. A surprise announcement after the returns come in would instantly transform Clinton's image from a defy-reality dead-ender to a gracious loser. If money matters to the Clintons (and despite Bill's buck-racking that remains a questionable proposition), a quick exit would allow the Obama campaign to step in to erase Hillary's campaign debts, which could be as much as $20 million. There is an easy way to do this without taking a penny from the Democrats' efforts against John McCain. And that would be for Obama to urge his high-roller donors who have "maxed out" (that is, given the legal limit of $2,300 to the Illinois senator for the primaries) to do the same for Clinton, which would be permissible until the Democratic Convention.

May 20: The Kentucky and Oregon primaries represent the moment when the Obama campaign calculates that it will have won a majority of all the delegates awarded in primaries and caucuses, regardless of what happens in the three final contests in Puerto Rico, South Dakota and Montana. Yet Clinton, with an expected victory in Kentucky, could make a coast-to-coast claim of her own: A voter could now drive from New York to California along a contiguous band of states that Hillary has carried. Admittedly, it is a small boast compared to being the nominee of the Democratic Party, but losers often take what they can get. With West Virginia and Kentucky presumably in the Clinton column, this is the moment when she probably could make the most persuasive electoral case that Obama needs her on the ticket as his running mate as a lure to blue-collar voters. If she decides that this is her consolation prize (and there is no evidence that she has reached that conclusion), there would be nothing left to prove by sticking around to, like as not, lose South Dakota and Montana.

May 21-May 30: The biggest election remaining on the Democratic calendar will be the DNC vote on appeals from Michigan and Florida. The rules committee is torn between two warring imperatives -- first, that these are states that the Democrats need to win in November, and second, that the party leaders in Michigan and Florida should be punished for violating the unequivocal rules about the order of the primaries. A draconian decision may well cost the Democrats electoral votes against McCain, but a permissive ruling would definitely undermine the party's authority over future primaries. A Clinton withdrawal would simplify everything for the DNC since they no longer would have to worry about placating both campaigns. Several compromises have been floated (a 69-to-59 vote edge for Clinton in Michigan, giving all the delegates from both states a half-vote each). But the punishment that the rules committee secretly favors is to take away all superdelegates (54) from both states, since it is elected officials like Michigan's Sen. Carl Levin and Gov. Jennifer Granholm, along with Sen. Bill Nelson from Florida, who encouraged these outlaw primaries.

June 4 and beyond: June 4 -- the day after the Montana and South Dakota primaries -- is apt to trigger an Oklahoma Land Rush of superdelegates to Obama. In the current political climate, it is hard to envision Hillary Clinton, that unyielding symbol of determination, continuing her unwinnable battle through June 5 -- let alone taking it all the way to the Denver convention.