California's marriage ruling -- what it means and what it doesn't mean

One can easily anticipate the myths and falsehoods soon to be spouted about this landmark ruling. 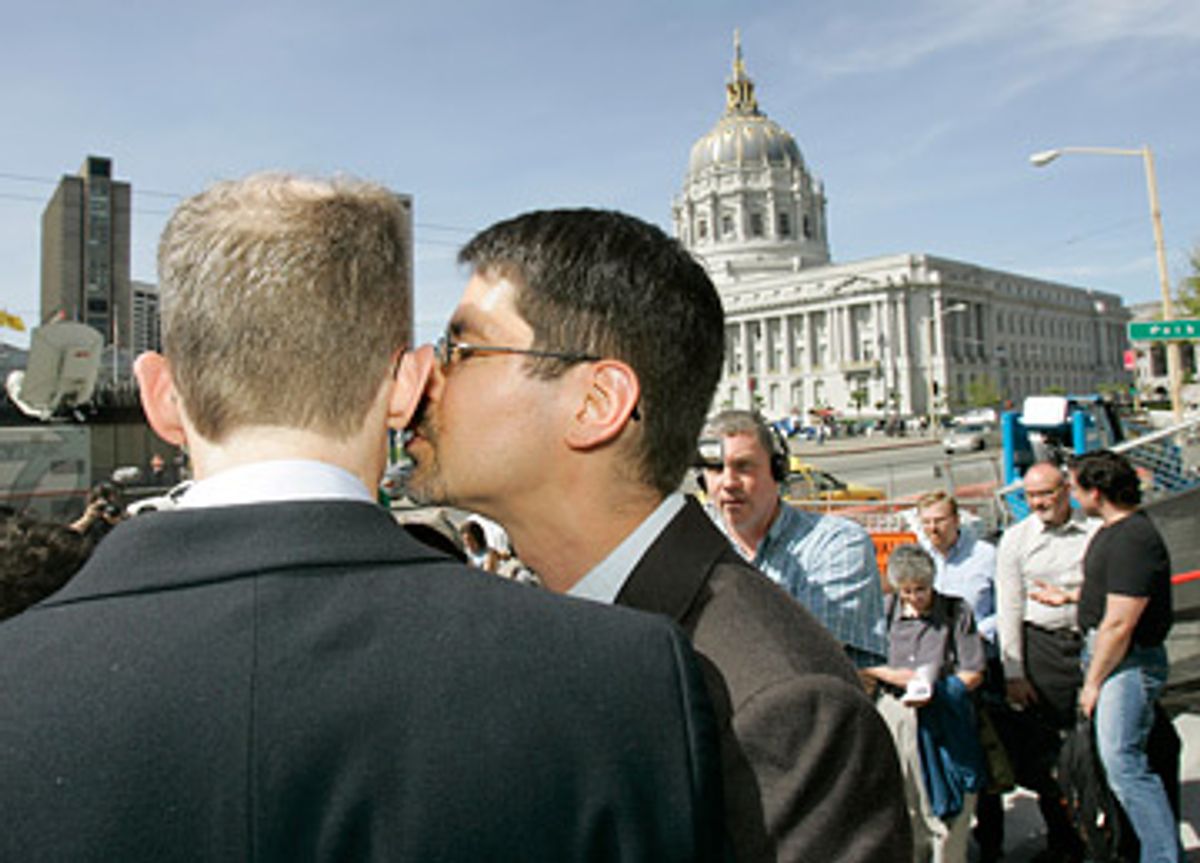 In a landmark ruling (.pdf) certain to spark far-reaching political and legal consequences, the California Supreme Court today ruled, by a 4-3 vote, that it is unconstitutional to exclude same-sex couples from the legal institution of "marriage," even if such couples are granted the right to enter into "domestic partnerships" or "civil unions" which provide most, or even all, of the same rights as "marriage." The Court is comprised of six out of seven Republican-appointed judges. The ruling had nothing to do with the U.S. Constitution, but instead was based on the California State Constitution's guarantee of the "right to marry" and its guarantee of "equal protection" under the law.

Critically, the Court emphasized at the outset that its ruling had nothing to do with the political views of the judges with regard to gay marriage, but rather, was based solely on its legal analysis of past precedent interpreting the relevant provisions of the state Constitution (emphasis in original):

[O]ur task in this proceeding is not to decide whether we believe, as a matter of policy, that the officially recognized relationship of a same-sex couple should be designated a marriage rather than a domestic partnership, but instead only to determine whether the difference in official names of the relationships violates the California Constitution.

Only after exhaustively analyzing California judicial precedent on these constitutional questions -- over the course of 121 pages -- did the Court conclude that the state statute "limiting the designation of a marriage to a union 'between a man and a woman' is unconstitutional and must be stricken from the statute, and that the remaining statutory language must be understood as making the designation of marriage available to both opposite-sex and same-sex couples." The ruling, in effect, compels state and local officials to begin issuing marriage licenses to same-sex and opposite-sex couples equally.

The crux of the Court's ruling is grounded in what it called "the right of two adults who share a loving relationship to join together to establish an officially recognized family of their own -- and, if the couple chooses, to raise children within that family." That right "constitutes a vitally important attribute of the fundamental interest in liberty and personal autonomy that the California Constitution secures to all persons." The Court rejected a "separate-but-equal" arrangement for same-sex and opposite-sex couples -- where only the latter can enter into "marriage" -- because:

Given the controversial nature of this ruling, there are certain to be all sorts of myths being spouted by pundits and various advocates who object to the outcome here. Thus, it is vital to note:

(1) No rational person can criticize the Court's decision here without having at least a basic understanding of the governing California precedents. Anyone who condemns this ruling without having that understanding will be demonstrating a profound ignorance of -- and contempt for -- how the law works.

As the Court made clear, whether someone believes that "marriage" should include same-sex couples is completely irrelevant. It is equally irrelevant whether one believes that the U.S. Constitution can be read to require same-sex marriages. There is one issue, and only one issue, that matters here: are the provisions of the California State Constitution, in light of how they have been interpreted by that state's Supreme Court in prior decisions, violated by the exclusion of same-sex couples from the legal institution of "marriage"?

(2) Equally misinformed will be anyone arguing that this is some sort of an example of judges "overriding" the democratic will of the people. The people of California, through their representatives in the State legislature, twice approved a bill to provide for the inclusion of same-sex couples in their "marriage" laws, but both times, the bill was vetoed by California Gov. Arnold Schwarzenegger, who said when he vetoed it that he believed "it is up to the state Supreme Court" to decide the issue.

Polls have found substantial support for gay marriage in California, with dramatic trends toward favoring gay marriage. While there was a referendum passed in 2000 limiting marriage only to opposite-sex couples, five years later (in 2005), California's state legislature became the first in the country to enact a same-sex marriage law without a court order compelling them to do so. Thus, even leaving aside constitutional guarantees (which, in a constitutional republic, trump public opinion), today's ruling is consistent with that state's democratic processes and public opinion, not a subversion of it.

(3) Numerous states have already adopted laws declaring that they will not recognize same-sex marriages from other states. Moreover, the Defense of Marriage Act makes clear that states are not required to do so. Thus, those states which wish to continue to deny basic marriage rights to their gay citizens will be free to continue to do so. Today's ruling applies only to California.

(4) The Court did not rule that California must allow same-sex couples the right to enter into "marriage." It merely ruled that if the state allows opposite-sex couples to do so, then same-sex couples must be treated equally. The Court explicitly left open the possibility that the state could distinguish between "marriage" (as a religious institution) and "civil unions" (as a secular institution) -- i.e., that California law could leave the definition of "marriage" to religious institutions and only offer and recognize "civil unions" for legal purposes -- provided that it treated opposite-sex and same-sex couples equally. The key legal issue is equal treatment by the State as a secular matter, not defining "marriage" for religious purposes.

(5) Each time there is a court decision recognizing the constitutional rights of gay couples, all sorts of hysterical political commentary ensues. In October, 2006 -- right before the midterm elections -- the New Jersey State Supreme Court unanimously ruled that its Constitution requires same-sex couples to be given the same set of marital rights and privileges granted to opposite-sex married couples (though it ruled, by a 4-3 vote, that it need not be called "marriage").

As I noted at the time, all sorts of pundits and right-wing hacks shrilly predicted that the New Jersey gay rights ruling would lead to a major voter backlash that would mobilize social conservatives and destroy the Democrats' chances for victory in the midterm elections. Needless to say, for reasons I pointed to at the time, nothing of the sort happened. Our national elections are simply not determined by a decision by the state of California -- or New Jersey, Vermont or Massachusetts -- to extend equal rights to their gay citizens.

I respect the Court's decision and as Governor, I will uphold its ruling. Also, as I have said in the past, I will not support an amendment to the constitution that would overturn this state Supreme Court ruling.

There had already been efforts underway by California Republicans to amend the State Constitution to exclude same-sex couples from "marriage." Gov. Schwarzenegger already vowed, and made clear again, that he would oppose not support such a referendum.

UPDATE II: Salon's Alex Koppelman has numerous updates on reaction to the decision from everyone from San Francisco Mayor Gavin Newsom to various "pro-family" groups.

UPDATE IV: Just to underscore how exaggerated is the significance of gay marriage as a political weapon, here is a 2006 fear-mongering ad run in Arizona -- featuring John McCain -- urging Arizonans to amend their constitution to ban same-sex marriage (h/t Hot Air's Allahpundit, whose analysis of today's ruling is (one must acknowledge) actually quite good, because he bothered to read the decision before opining):

Despite scare-mongering ads of that sort, conservative/libertarian Arizona voters became the first to reject a state-wide ban on same-sex marriage, reflecting the fact that exploitation of this issue is far less politically potent than it once was. And, of course, the 2006 New Jersey Supreme Court ruling weeks before the midterm elections did nothing to help the GOP stave off crushing defeat.

UPDATE V: Just to clarify in response to a couple of comments here and elsewhere: nothing in what I wrote states or suggests that one needs to be a "legal scholar," an "expert" or even a lawyer to form a reasoned opinion about the court's ruling. I don't believe that to be true, and have made that point before:

This doesn't mean that only lawyers or constitutional law experts can form opinions about the court's actions. Anyone can read the judicial opinion, then go read the precedents on this provision, and inform themselves about what the [California] State Constitution does or does not guarantee. But -- as is true for any other topic -- a basic understanding of the relevant issues, so plainly lacking in all of these overnight experts, is required to be capable of anything more than baseless demagoguery.

The point is that whoever wants to make a reasoned argument about the court's ruling must -- by definition -- familiarize themselves with the relevant issues, and there is only one relevant issue here: does the California State Constitution bar the law in question? The way our government and system of laws were created, judges have no discretion if the answer to that question is "yes." They're required to strike down the law. As Alexander Hamilton put it in Federalist No. 78, regarding the duties of the federal judiciary: "wherever a particular statute contravenes the Constitution, it will be the duty of the judicial tribunals to adhere to the latter and disregard the former."

It's self-evident that there's no way rationally to assess whether the Court acted correctly if one doesn't bother to find out anything about the California State Constitution and the precedent interpreting and applying it. Anyone who seeks to opine about the propriety of the court's ruling without doing that basic work is simply expressing an opinion about whether they like the outcome as a policy matter, i.e., is being guided by the defining attribute of so-called "judicial activism" (ignoring relevant law in favor of outcome preferences).