Clint, Angelina and the movie with no name

Eastwood and his pregnant star bring their moody 1920s L.A. thriller to Cannes. But what's it called? 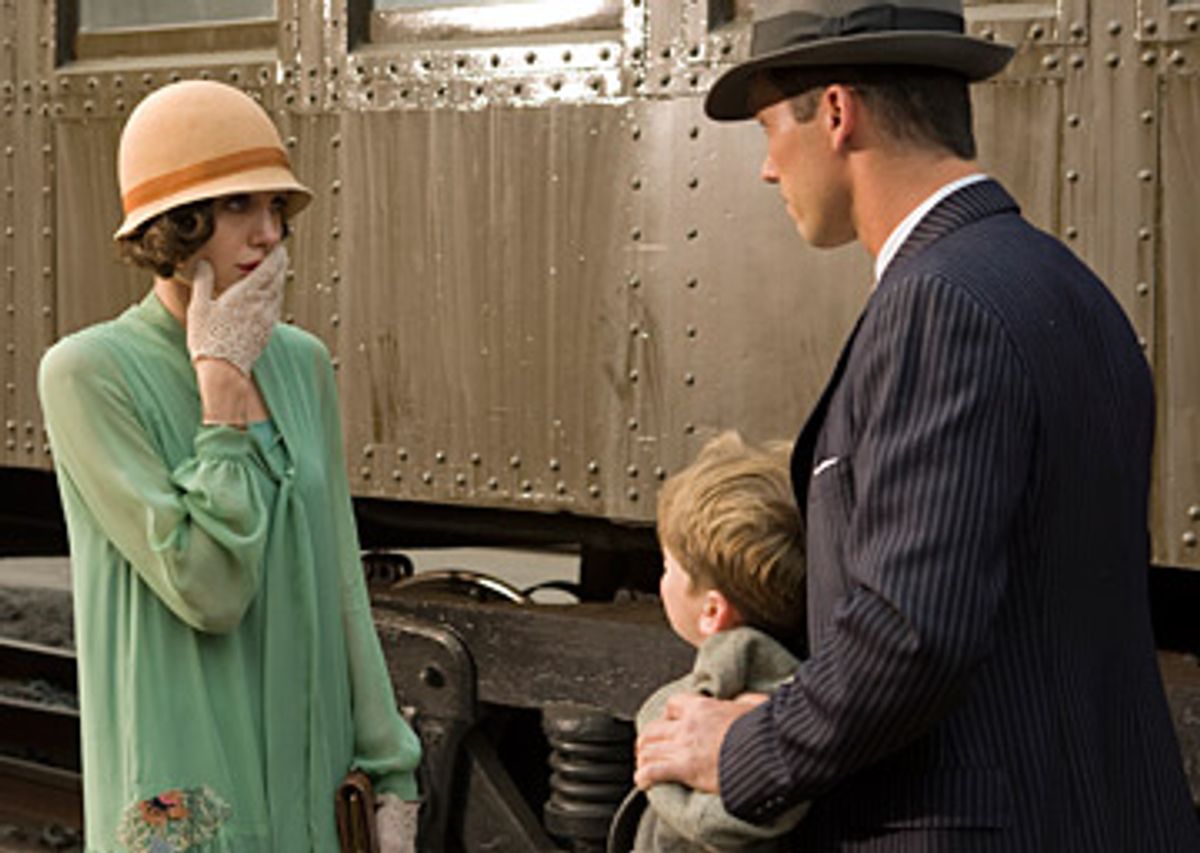 CANNES, France -- Here's the real question about Clint Eastwood's moody, murky 1920s thriller, almost two and a half hours long, which stars Angelina Jolie as a woman who has her 9-year-old son kidnapped and then a different child "returned" to her: What the hell is it called? Eastwood and his crew apparently scrambled to get the picture completed for its premiere; it was not expected to be a competition entry and probably won't open in the United States until November. (Indeed, after seeing that premiere I would argue that it's not quite finished now.) But along the way they evidently neglected to decide on a title.

For weeks the film has been listed in official festival materials under the title "Changeling," but a few days ago that title began to evaporate, almost as mysteriously as young Walter Collins does in the movie. It screened on Tuesday morning in the Grand Théâtre Lumière under the French title "L'échange," with no English translation given. That means "the exchange" -- there's no clear French equivalent to the word "changeling" -- and as the post-screening press conference was breaking up, host Henri Béhar said to Eastwood in tones of puzzlement, "We were all assured in writing that the title in English was now 'The Exchange.'"

Breaking out one of his trademark sphinx-like smiles -- the mouth smiles, but the eyes don't -- Eastwood replied, "It's in writing, but is it the truth?" We all laughed, he got up and left the room, and we were stuck with a movie with no name, made by the Man With No Name.

Whatever it winds up being called, "L'Ex-Changeling" got a warm reception from the press this morning. Whether that really reflects the film's inherent qualities, or just the experience of observing two prodigious stars of different eras collaborate on a major Hollywood project that wasn't made for morons, is open to debate. For anybody who's ever felt passionate about the movies, it was impossible to resist the spectacle of Eastwood, looking both dapper and weatherbeaten in an elegant cream-colored suit, strolling slowly through a rooftop garden here with the gloriously pregnant Jolie on his arm. It was of course the impersonation of casualness and spontaneity rather than the real thing; they were walking through a forest of photographers on their way to the press conference. But the appearance of being at one's ease while maximally exposed to public scrutiny is the essence of stardom.

Once they had made their way into the press room, Jolie was asked why she decided to make another film about a woman who suffers a terrible loss, so soon after "A Mighty Heart" (which premiered here last year). "When I read the script, I couldn't put it down, but I didn't want to do it," she said. "I didn't want to go through those emotions, I didn't want to experience this story for months. But when I knew Clint was doing it -- well, I would do anything he was working on, and I knew he would help me get through it. When a scene got delicate, or very emotional, we would get to it and get through it quickly, with very clear direction."

This is what actors always say about Eastwood. They love working with him because, as you'd expect, he's a pro's pro. He works quickly, he's decisive, he doesn't do many takes. Eastwood explained his approach to directing emotionally charged material: "I want to catch the actors before they've had a chance to think about it. I just want them to live it. I just do it the way I like to be directed, which is very decisively. I've worked with directors who experiment, who want to try a lot of different things, who can't decide what they want. I'd rather have a straight point of view and move through the story."

That assumes, of course, that a "straight point of view" is the right way to tell every kind of story. Eastwood is at his best as a director, I think, with relatively straightforward genre material where questions of timing, pace and construction are paramount. He has made westerns, whodunits, war movies and even comedies, but J. Michael Straczynski's script for this film, which sticks very close to the almost unbelievable facts of a real 1928 kidnapping case and its aftermath, is not quite any of those things.

This story is episodic, ungainly and highly ambiguous. Its message is not entirely clear and its central mystery remains unsolved. I suspect Straczynski saw something in this material that was closer to "Chinatown" than to "Mystic River," and while Eastwood has made some excellent films he is not an idiosyncratic visionary after the Roman Polanski fashion. "L'Ex-Changeling," at least as seen here in what may not be its final form, has passages of great emotional power and big blocks of formulaic explanation and exposition. It meticulously re-creates the Los Angeles of another era, and then washes it in a gray-blue light that makes the picture's tragic events seem dim and distant.

Possibly to conceal her pregnancy, Jolie plays beleaguered working-class heroine Christine Collins in a series of unflattering flapper-style outfits that make her seem overly skinny and attenuated even before her son disappears. A telephone-company supervisor in charge of numerous Los Angeles operators -- she wears roller skates to get from one end of the immense switchboard to the other -- Christine comes home from work one evening to find that Walter has vanished, his toys untouched and his sandwich in the fridge uneaten.

These early scenes are quick and matter-of-fact, and serve largely to illustrate how vulnerable and powerless an unmarried woman of the 1920s was when faced with officialdom. At first the cops aren't much interested in Walter's whereabouts, but after five months they produce a boy, apparently abandoned in rural Illinois, who says he is Walter Collins and provides Christine's home address as his own. He is brought back to L.A. by train and reunited with her -- except that she immediately announces he isn't Walter.

Most of the movie, by far, is about the beyond-Kafka universe Christine is plunged into while trying to convince an increasingly hostile roster of male authorities that some dreadful mistake has occurred. It's not fair to give away any more plot of a movie you won't see for five months, but a few observations will suffice. The film isn't much about what actually happened to Walter, since that question remains an unsettling subplot that intersects with one of the first sensational serial-killer stories of the 20th century.

But it's only partly about the element Eastwood and Straczynski focus on most clearly, that being one lonely woman's courageous Erin Brockovich-style struggle against a corrupt bureaucracy determined to protect itself at all costs. This movie without a name is also about more amorphous things, like the inevitability and unacceptability of loss and the slippery nature of truth. Jolie's Christine keeps being promised the truth about Walter, by cops only interested in protecting their power and privilege, by a sympathetic minister (John Malkovich) using her to wage war on city hall, by a convicted killer whose own grasp on reality is tenuous at best. She's never going to know what the real deal is with the real Walter and the impostor Walter, and neither are we.

Asked why his recent films have appeared to be about the elusiveness of truth, Eastwood smiled his most charming smile, as if he were delighted with the question, and then eluded it himself. "Most stories, if they're intriguing enough to be worth telling, are trying to get at the truth," he said. "For an actor, telling the truth is the most important thing."

Eastwood further admitted that this tale of dastardly behavior by Los Angeles police 80 years ago may strike people as reflecting more recent events, but carefully avoided expressing anything close to a controversial opinion. "It seems like every two or three decades, the police department and the political structure in Los Angeles goes through some kind of revolution or crisis," he said. "This was one of those periods. There's a period of corruption, followed by some kind of house-cleaning."

That was how it went with Clint. He was friendly and at ease. He laughed easily and he made us laugh. His answers all seemed reasonably forthcoming in the moment, but when I looked over my notes I realized he had adroitly steered clear of anything that smacked of intellectual analysis. When an Eastern European journalist asked a perfectly reasonable question about whether the film was meant to demonstrate the power of democracy to correct its flaws, he moved his granite gaze around the room and asked mildly: "Can anybody decipher that?"

In fact, Eastwood's most expansive, philosophical moment came when asked why he didn't insist that his films be shown at Cannes outside the competition, as big-name Hollywood directors generally do. (Steven Spielberg and Woody Allen have already done it this year.) "If you do that, you're acting like you're somehow above it," he said. "Well, I'm not above it. You go and you let it happen." He admitted that when he was Palme d'Or jury president in 1994, the winner had not necessarily been his favorite film. (Intriguingly, the Palme went to "Pulp Fiction" that year.) "Sometimes good films win, and sometimes not-so-good films win. It's like that at the Academy Awards and anywhere else. What happens happens, and I hope people like the film."

It was left to Angelina Jolie to make obligatory comments about how this nameless movie "is symbolic of events all over the globe, where people are oppressed and fighting for their rights," and to share a brief reminiscence of her late mother.

Her own experience of motherhood was the basis of her performance, Jolie said, but because of the social environment of 1920s America, "Christine couldn't respond the way I would respond. I'm a very outspoken woman, but my mother was very quiet and restrained. A lion with her children, but shy with her voice as a woman. Playing Christine felt like spending time with my mother. It was very healing, very nice."

Beyond The Multiplex Movies Thrillers