Psycho Christians and the media

Why the press gives McCain a pass for consorting with batshit holy men, but condemns Obama to talk-show hell for the same sin. 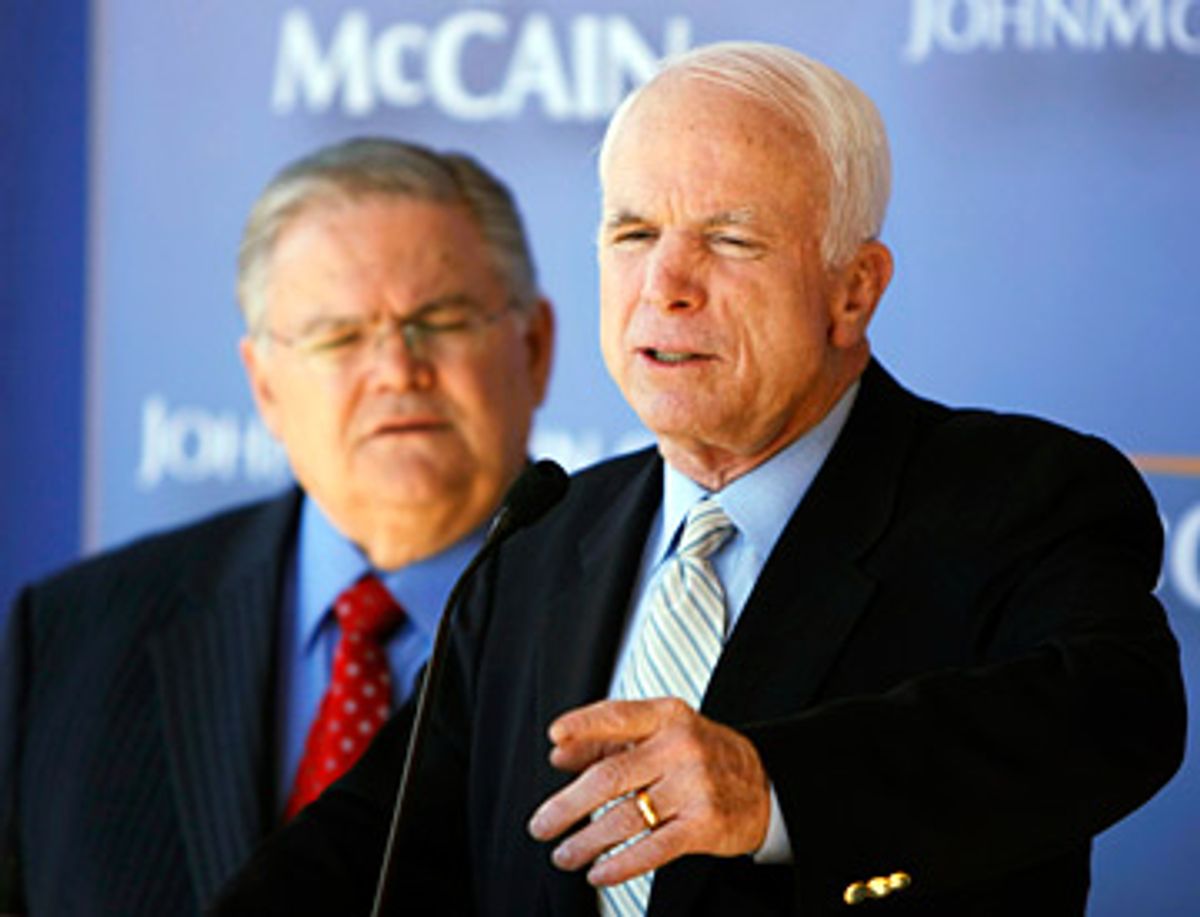 John McCain has some seriously screwed-up holy men surrounding him. First, there's the Rev. John Hagee, a hate-monger and certifiable loon who believes that Hurricane Katrina was God's judgment on New Orleans for planning a gay parade, calls Catholicism a "false cult system" that conspired with Hitler to exterminate the Jews, and believes that America's divine duty is to destroy Iran. Then there's the Rev. Rod Parsley, who garnishes his bigoted theology by calling Islam "the greatest religious enemy of our civilization and the world" and saying that Muhammad was "a mouthpiece of a conspiracy of spiritual evil."

These psycho Christians make Robert Mitchum's sociopathic traveling preacher in "The Night of the Hunter" (the guy with "love" tattooed on one hand and "hate" on the other) look like St. Francis of Assisi. They are undiluted bigots who espouse beliefs just as twisted as those promulgated by the Rev. Louis Farrakhan -- and far more toxic and extreme than those held by Rev. Jeremiah Wright.

Yet, as many media critics have noted, no major-network interviewer is demanding that McCain denounce Hagee or Parsley, as Tim Russert infamously demanded again and again that Obama do of Farrakhan during a prime-time debate. No cable channel is ranting 24/7 about McCain's failure to disavow these extremist bigots, and speculating that his ties to Hagee and Parsley could cost him the election. Considering that McCain desperately needs Hagee and Parsley to deliver votes in key states like Ohio, this is no small matter.

It's true that neither Hagee nor Parsley was McCain's pastor and personal spiritual advisor, as Wright was for Obama. Obama's personal relationship with Wright raised more legitimate questions than were raised by McCain's actively seeking Hagee's endorsement. But especially during the second, more serious outburst of Wright-hysteria, after Wright went off the reservation at the National Press Club, it was obvious that the story had really shifted to Wright, not Obama. The brouhaha was a media ritual, in which Obama was required to sacrifice an unseemly political ally as a kind of campaign station of the cross. Obama had already given his now-famous speech about race in Philadelphia, and no one seriously believed that he shared Wright's views. In any case, even if Hagee and Parsley had been McCain's pastors, it's hard to imagine that the media would have attacked him as relentlessly as it has attacked Obama over Wright and Farrakhan.

The media's double standard is all about deference to perceived mainstream norms, and tiptoeing around the Christian right. Despite their cartoonish views, the media treats Hagee and Parsley as quasi-mainstream figures, which makes McCain's relationship with them non-newsworthy. The dirty little secret of mainstream American journalism is that it operates within invisible constraints that conform to some imagined Middle American consensus. The issue isn't that journalists share Hagee and Parsley's views so much as that they know that they are widely held, which makes them reluctant to acknowledge how truly outrageous they are. After years of nodding at the whacked-out likes of Jerry Falwell and Pat Robertson, the media has, to borrow Daniel Patrick Moynihan's famous phrase, defined right-wing religious deviancy down. More or less "orthodox" Christian-right insanity, of the sort espoused by Hagee and Parsley, is familiar and normal, whereas black-church radicalism, with its ties to left-wing liberation theology, is not. In 2000, 45 percent of the population told Gallup they were either born-again or evangelical Christians.

The question of "newsworthiness" is one of the blind spots of conventional journalism. Since right-wing religious leaders have been endorsing conservative Republican candidates for decades (Moral Majority founder Jerry Falwell endorsed Ronald Reagan; Pat Robertson endorsed Rudy Giuliani; a small church in North Carolina kicked out members who voted for John Kerry), when another one does it, it's a dog-bites-man story. Mainstream editors and reporters pose as hard-bitten realists, but they are in fact reluctant to deviate from pack thinking. For the media to suddenly go after McCain on Hagee as hard as it has gone after Obama on Farrakhan and Wright would represent, in their eyes, a "controversial" rejection of the way things have always been done.

This echo-chamber effect, in which a story is a story because it has been a story before, highlights the critical importance of precedent. From the beginning, the media didn't go hard after extreme figures on the religious right because those extreme figures have major constituencies. The taboo against criticizing Christianity also plays a crucial role: Extreme, even demented beliefs are seen as untouchable so long as they are part of what is seen as mainstream evangelical Christianity. Of course this taboo does not extend to criticizing left-wing Christianity, à la Wright. If some public figure said that the earthquake in China was caused by the wrath of Zeus, who was offended because women's rights had reduced the number of compliant virgins available for him to deflower, any politician who consorted with him would be forced to repudiate him. But Jerry Falwell, Pat Robertson, John Hagee and other such figures have said essentially the same thing and gotten a pass. Afraid of coming across as arrogant elitists who don't understand or respect the faith of "real" Americans, the media has pulled its punches on the Christian right for years.

Patriotism and Islamophobia also contribute to the blank check handed to the religious right. Hagee and Parsley may be barking mad, but they wave the flag and denounce Islam. In the age of George W. Bush, that qualifies them as solidly in the American mainstream.

In fact, the media's failure to subject Hagee and Parsley to the same scrutiny that they have given to Wright and Farrakhan is closely related to its colossal failures in covering Bush's "war on terror." The media failed in the run-up to the war in Iraq in large part because, under the patriotic pressure of 9/11, it followed the wartime norm of swallowing the administration line. Its shortcomings with Hagee and Parsley reflect the same internalized self-censorship.

One could argue that neither McCain nor Obama should be subjected to this "gotcha" game in which the media demands that a candidate prove his character and values by publicly excommunicating a problematic political ally. But the fact is that political news coverage today is driven by sensationalism, and candidates are subjected to simplistic tests, and that's not going to change. So if Obama is forced to answer for Wright's off-the-wall black nationalist Christianity, it's only fair that McCain should be forced to answer for Hagee's even more off-the-wall Christian right looniness as well.

Yet the coverage has been anything but fair -- not just because of the media's fear of going after nutty Christians, but because everything about Obama is unprecedented and therefore "sensational." He's not only the first-ever black presidential front-runner, but the first to confront a loose-cannon black pastor who said, "God damn America." It bleeds! It leads! Tear up the front page! Call in the pundits to opine! By contrast, McCain's mealy-mouthed half-criticisms of Hagee's outrageous statements, and Hagee's transparently disingenuous apology for attacking Catholics, are so familiar as to be sleep-inducing. There's practically nothing that McCain can say or do that can make news the way that Obama does just by walking down the street.

By incessantly attacking Obama as strange and scary, which is certain to be his strategy, McCain will be tapping into this already existing media bias toward sensationalism. His and Bush's outrageous charges that Obama is an "appeaser" are intended to play into this, and much worse is sure to be coming (get ready for a revival of "he's a Muslim" smears from proxies who can be disavowed). Whether the press will be able to find the backbone to reveal the cynical emptiness of those charges, and bring aggressive scrutiny even to the old, familiar, patriotic, war-supporting, flag-waving ethos represented by McCain, may go a long way toward determining who our next president is.