America finally gets it right, and the best man wins! 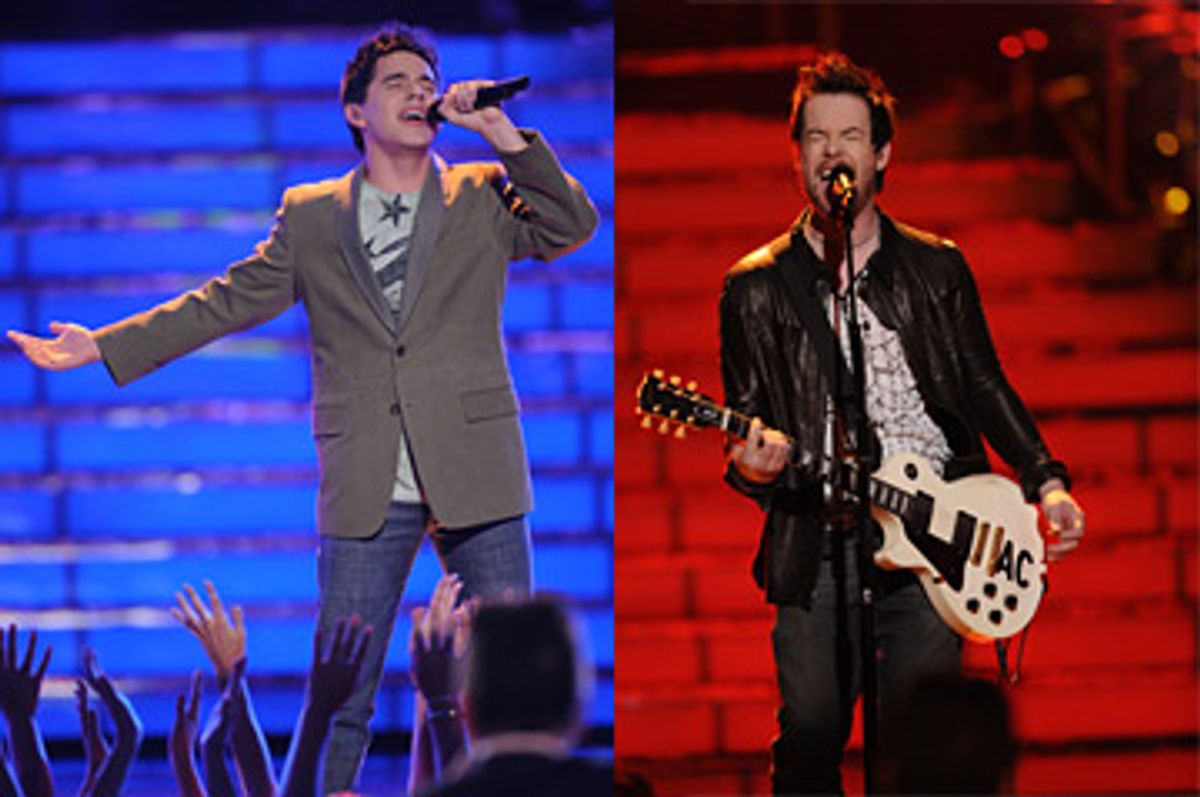 Sometimes the snow comes down in June. Sometimes the sun goes 'round the moon. And sometimes -- every once in a while -- the people who vote for "American Idol" get it right.

On Wednesday night, they got it right. They anointed the smartest, most intriguing, most authoritative performer this program has seen in many a season, and in the same stroke, they made a case for "American Idol's" relevance, at a time when it was seriously in doubt.

Things weren't supposed to play out this way. The crown was supposed to go to a sweet, underage, daddy-whipped crooner from Utah. And, to judge from the last few months of press clippings, we were supposed to put "American Idol" firmly behind us. Ratings are down. Fans are grumpy. The fix is in, the formula's tired, the audience is aging. It's time to get real. It's time to get rid of Randy. (Well, actually, that's true.) It's time to get rid of Paula, who binds her breasts the way Chinese women used to bind their feet and who says things like "I look at you up on that stage, and you're standing in your truth." It's time to dispense with the whole charade that winning this show boils down to anything more than having fans who can hit "redial" a million quadrillion times on their enV cellphones.

And until Wednesday night, who was I to argue? When there were so many arguments in the opponent's corner? When the show's been taking so many uppercuts and left hooks and right crosses from so many comers?

Sorry, I was swept away by the boxing metaphors of Tuesday night's episode, which began with an announcer assuring us that we were watching "the fight of the century ... so let's get ready to rumble!" M.C. Ryan Seacrest (remember when he was goofy?) continued the overkill with "the biggest showdown in American history! ... Tonight they go head-to-head for three rounds!"

Maybe you thought you'd wandered into "American Gladiator"? No, it was just David Cook, 25-year-old bartender from "the outskirts of Kansas City," and David Archuleta, 17-year-old android from "the foothills of Salt Lake City." Any illusion that this was really an exercise in pugilism evaporated the moment Archuleta tripped coltishly down the staircase of L.A.'s NOKIA Theatre in his silken boxing robe, his every mincing step proclaiming: "Daddy, I'm doing my best!"

And when Simon Cowell, staying manfully on message, snarled, "You've got to hate your opponent," Archuleta reacted like Ferdinand the Bull. "This guy's awesome," he said, goo-goo-eyeing big-brother Cook, who replied in kind: "You've been one of the most consistently nice people."

For all the efforts to pump testosterone into the show (Jim Lampley, arguably America's most annoying sportscaster, was dragged out for color commentary) "American Idol" has seemed almost perversely intent, over the course of its seventh season, on proving that its true audience is grandmothers and granddaughters. Why else would David Archuleta have been the presumptive favorite from the moment he fluttered his calfling lashes? His inability to make one song sound different from the next, his patent helplessness in the face of rhythm, his Frommer's-guide approach to adult sexuality ("Sweet Caroline," "And So It Goes") -- these limitations, far from undermining his chances, merely raised him higher in the audience's estimation.

And then came David Cook.

Let me start by saying this. The only goose bumps "American Idol" afforded me this past season came when Cook mangled a piece of pop confectionery into something bitter and scalding and virtually unrecognizable. Michael Jackson's "Billie Jean," Lionel Richie's "Hello," Mariah Carey's "You'll Always Be My Baby" ... who would have guessed these songs could ever sound dangerous? And yet that's exactly the transformation Cook pulled off, thanks to his deconstructive sensibilities and his innate musical intelligence (and the example of rock iconoclasts like Chris Cornell).

The only time Cook foundered artistically was when he did "the right thing": a Bono-channeling "I Still Haven't Found What I'm Looking For" from Tuesday night's episode; a perfectly nice and perfectly dreary rendition of "The Music of the Night" from "The Phantom of the Opera." Cook understood early on that danger, true danger, does not win "American Idol." Not when the season's "mentors" are the likes of Dolly Parton, Andrew Lloyd Webber and Neil fucking Diamond. Not when the guy choosing the songs for the climactic showdown is cryptkeeper Clive Davis, looking more and more like something that stands between Indiana Jones and his treasure. Not when the singer's "prize" for reaching the last round is a generic piece of musical tripe that can be reduced to "If you have the dream, then take this moment because it's the time of your life." (I still remember the tragic gaze of last year's runner-up, beat-boxer Blake Lewis, as he squirmed into his ballad-hairshirt.)

"American Idol" is pitched very much to the "heartland," by which I don't mean geography but a mushy cultural middle, where striving merges with blandness to produce something that smells like ambition but is its complete opposite. This is a show, generally, that rewards you for sounding like somebody you've been hearing all your life.

And in fact, Wednesday night's variety-show capper was full of those voices. Ladies and gentlemen: George Michael! Bryan Adams! ZZ Top! Graham Nash! The poor Idolettes, when they weren't forced to pay homage to their elders, were cavorting in rigidly choreographed formations that reminded a friend of mine of "The Brady Bunch Variety Hour." (Only Amanda Overmyer, blues-rock Hoosier nurse, seemed to understand she was being humiliated.)

This is all a roundabout way of saying that 2008 should have been David Archuleta's year. He has the most unforced vocal technique since -- excuse me while I dry-heave -- Josh Groban. He is sweet and milky and blackhead-free, and he is utterly inhuman, like something you'd encounter on Disney's "Small World" ride. (Paddle! Paddle!) "Archu-Dee-Two," one blogger has called him, and I would have to agree, except that I can't help envisioning a time when Archuleta breaks out of the workshop and goes on a rampage through the surrounding countryside, hot-wiring cars and breaking kneecaps, with Miley Cyrus in tow. To quote the title of his favorite song: "Imagine."

But here's the thing. I can call "American Idol" every word in the lexicon: cheap, corrupt, meretricious. I can wonder why so many of the contestants go so flat in their lower registers. (Where is Randy with his "pitchy" wand?) I can ask myself if any amount of money can justify those Ford ads, into which the Idolettes are impressed like so many Fritz Langian robo-workers. But, as God is my witness, I was watching Wednesday night, praying that David Cook might be granted a reprieve -- and he was. And as he dissolved in sobs, a few tears sprang to my eyes, too. I realized that one of the things fueling my season-long vigil -- one of the reasons I still watch this show after so many years -- is the possibility that my generation might still have a say in our pop culture. David Cook is young enough to be my son, but he makes music for grown-ups, and we grown-ups need music even more than the wheatlike children who sway in front of every "American Idol" stage. At least for today, the U2 song no longer applies. We've found what we're looking for.