In Iowa, Obama reaches toward victory

Back in the state where his remarkable run began -- also a critical battleground this fall -- Barack Obama focused on a showdown with John McCain. 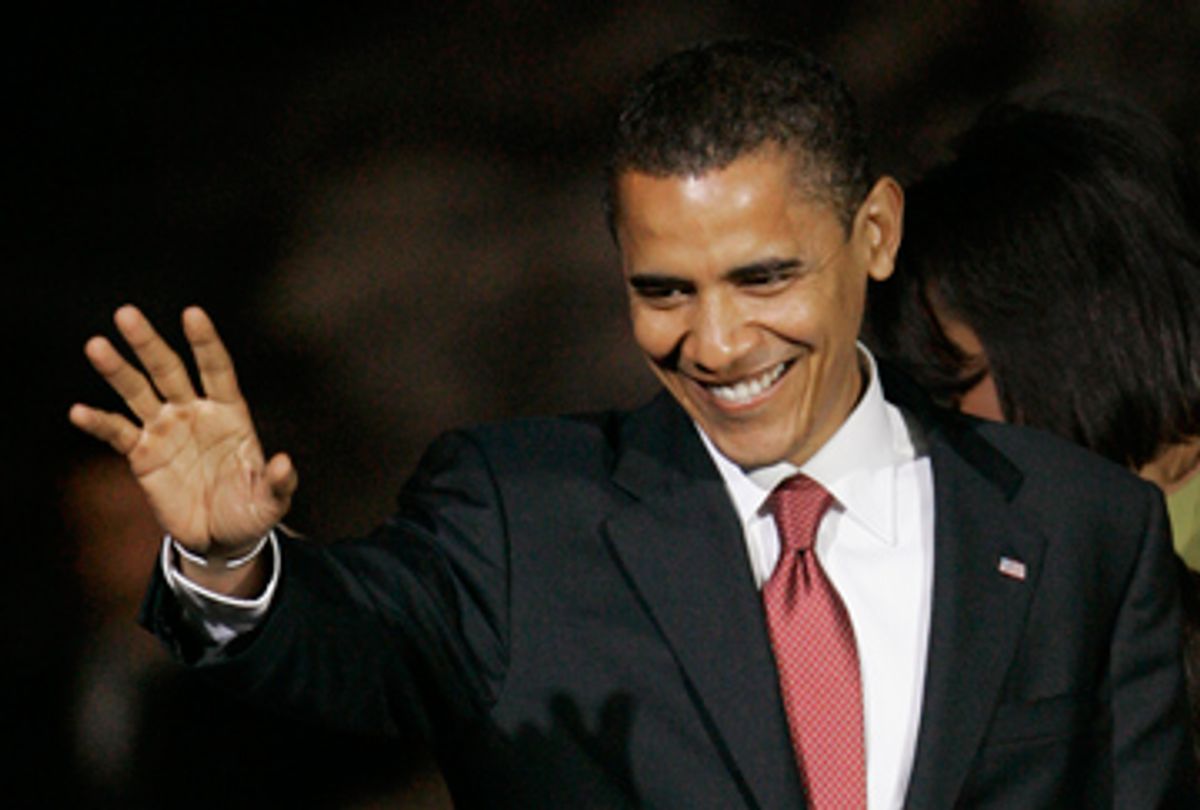 Technically, Barack Obama's aides didn't call the rally here Tuesday night a victory party, but you'd be hard-pressed to figure out another name for it. There were thousands of slogan-chanting Iowans, standing in the shadows of their state's gold-domed Capitol. There were huge American flags waving over downtown streets closed to traffic. There was even a live band -- Faculty Lounge, "Des Moines' premium eight-piece, teacher-friendly, horn-driven, multi-hyphenated funk machine," playing a warm-up set that would have fit in just fine at a wedding, bar mitzvah or high school reunion. (They opened with "Superfreak," just as Hillary Clinton was speaking at her own rally in Louisville, Ky., and closed with "Good Times.")

After Obama himself took the stage, at first accompanied by his wife and daughters, he delivered a stemwinder of a speech that tiptoed up to declaring victory at last in the Democrats' protracted primary campaign -- only to stop just short of it. But there was no mistaking the symbolic purpose of the setting. "Tonight, in the fullness of spring, with the help of those who stood up from Portland to Louisville, we have returned to Iowa with a majority of delegates elected by the American people, and you have put us within reach of the Democratic nomination for president of the United States," Obama said, to a long roar from the crowd. "While our primary has been long and hard-fought, the hardest and most important part of our journey still lies ahead."

With a big win in Oregon's primary, and sidestepping a big loss in Kentucky's vote, Obama ended the night with -- exactly as he said -- a majority of pledged delegates for this summer's Democratic convention (assuming, that is, that Michigan and Florida's contested delegations aren't included). What kept the party in Des Moines from truly cutting loose is the inconvenient fact that that achievement doesn't actually entitle Obama to, well, much of anything official. He'll still need to win over a few dozen of the remaining undeclared superdelegates, plus rack up more pledged delegates in the last three primaries, before he locks up the nomination -- though it's all but certain that he will, and probably within the next couple of weeks.

But by forgoing an election night rally in Oregon and returning to Iowa -- the state that not only made him the party's front-runner but that will also be a key battleground in the general election against John McCain -- Obama made clear that he's moving on to the race that culminates in November. Al Gore won Iowa in 2000, and John Kerry lost it in 2004. Many analysts believe the state will be a must-win for Obama, and his own team knows its importance. "It's a red state we're going to turn blue," spokesman Bill Burton told Salon, when asked why the rally was held here Tuesday night.

And Obama's speech was, without a doubt, a general election speech. "The same question that first led us to Iowa 15 months ago is the one that has brought us back here tonight; it is the one we will debate from Washington to Florida, from New Hampshire to New Mexico," he said, ticking off no fewer than four potential swing states. "The question of whether this country, at this moment, will keep doing what we've been doing for four more years, or whether we will take that different path -- it is more of the same versus change. It is the past versus the future."

To the extent Obama mentioned Clinton at all, it was to congratulate her on a race well run -- an act of graciousness made easier because it's a race Obama's team clearly feels he has won. "The road here has been long, and that is partly because we've traveled it with one of the most formidable candidates to ever run for this office," he said. "No matter how this primary ends, Senator Clinton has shattered myths and broken barriers and changed the America in which my daughters and yours will come of age."

Still, the fact that he held Tuesday's big rally in a state that voted months ago rankled Clinton's backers. "Premature victory laps and false declarations of victory are unwarranted," Clinton strategist Howard Wolfson wrote in a stung-sounding memo to the press Monday. "Declaring mission accomplished does not make it so." Clinton is not, evidently, going away easily -- she raised $22 million in April (Obama raised $31 million), and she promised once again on Tuesday night that she'd keep going. "This is one of the closest races for a party's nomination in modern history," Clinton told supporters at her Kentucky rally. "We're winning the popular vote and I'm more determined than ever to see that every vote is cast and every ballot counted." (Her math is somewhat dubious, of course; she's winning the popular vote only if all of her votes from Michigan -- where Obama wasn't on the ballot -- are counted toward the total, while none of the hundreds of thousands who voted for "uncommitted" there, by her calculation, would go toward Obama's tally.)

But as far as Obama was concerned, Clinton was no longer the issue anyway. Iowa was. His aides invited former backers of John Edwards, who finished second in the Iowa caucuses and endorsed Obama last week, to meet Obama before the event. The state's Democratic Party chairman, Scott Brennan, announced his support as well. Obama hadn't been back to the state since winning the caucuses Jan. 3, but he still seemed to carry the kind of rock-star aura that he had early in the race, before the campaign turned into a 50-state slog and before he started losing contests to Clinton. Supporters were lined up around the corner to get into the rally well before Obama's plane even flew in from Chicago, and they pressed up against the stage when he finished to try to shake his hand.

McCain, meanwhile, barely campaigned in Iowa last year and has only a skeletal organization in place here. He has hired a former Mitt Romney strategist to run his Iowa operation in the fall. Obama's returning here effectively to launch his general election campaign won't hurt Obama among Hawkeye State voters, Republicans acknowledged. "That's a big deal, and that's going to garner a lot of attention -- probably the most for anything political since the caucuses," Tim Albrecht, another former Romney aide who now runs an anti-Obama group based in Des Moines, told Salon.

This week may, truly, mark the beginning of the fall campaign. From Iowa, Obama will head to Florida, for his first-ever public stop in the state. Already, Obama and McCain, and their surrogates, snipe at each other every hour in the press. But before moving on, Obama looked back over the long primary race as a way of looking forward.

"Fifteen months ago, in the depths of winter, it was in this great state where we took the first steps of an unlikely journey to change America," he told the voters who first put him on the road to the general election. "The skeptics predicted we wouldn't get very far. The cynics dismissed us as a lot of hype and a little too much hope. And by the fall, the pundits in Washington had all but counted us out," he said. "But the people of Iowa had a different idea."

The people of Iowa helped get Barack Obama to where he is now, the all but certain Democratic nominee. Tuesday night, he showed them he knows he'll need their help again to make him the next president.