The new math in Florida and Michigan

After a day of wrangling in Washington, the magic number for the Democratic presidential nomination is now 2,118, and Hillary Clinton nets 24 largely symbolic votes. 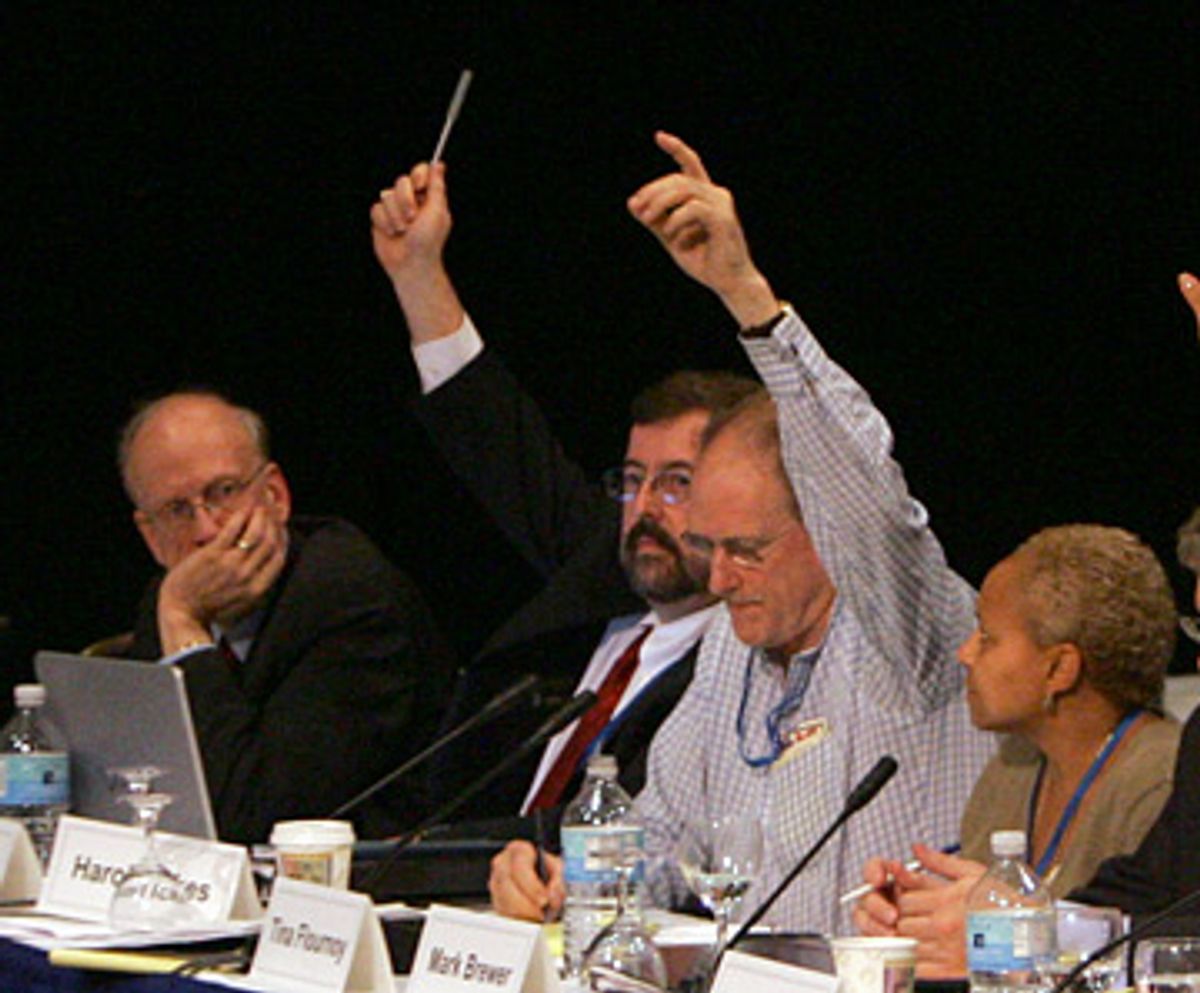 Even by Parisian standards, it was a late and long lunch break, ending after 6 p.m. Saturday. But during this closed-door, three-hour interlude in their all-day meeting, the Rules and Bylaws Committee of the Democratic Party finally agreed on a compromise for seating the Michigan and Florida delegations at the Denver convention. Both states lost half their convention votes as punishment for holding queue-jumping January primaries in defiance of party dictates. But Saturday's accord ending the Florida dispute was approved by the 30-member committee unanimously, while only eight Hillary Clinton die-hards opposed the intellectually ungainly, but politically astute, Michigan settlement.

If there was a winner, it was probably the Democratic Party, which can now concentrate on winning Florida and Michigan (44 electoral votes between them) in November without worrying unduly about lasting scars from the primary fight. Seating Michigan and Florida allowed Clinton to cut Barack Obama's still substantial national delegate lead by 24 votes, while slightly moving the goal posts by raising the number of delegates needed for a confetti-drop convention majority to 2,118. As for Obama -- the cusp-of-victory candidate -- 24 convention votes seemed an affordable price to pay for party harmony, especially since Clinton had won the outlaw Jan. 29 Florida primary in a 50-to-33 percent landslide.

Florida -- a state where more than 1.7 million Democrats voted and all the presidential candidates were on the primary ballot -- was comparatively easy for the rules committee to unravel, even though the Clinton team was nominally holding out for dropping all penalties. In phone conversations Wednesday night, the rules committee hammered out a compromise that was ratified at Saturday's meeting: The primary results would be considered valid, with Clinton receiving 105 delegates and Obama 67, but each Florida delegate will only cast half a vote in Denver, meaning Clinton's 38-delegate advantage would translate into only 19 additional votes. But Michigan was the muddle, since Obama took his name off the Jan. 15 primary ballot, many Democrats either stayed home or crossed over to vote in the hotly contested Republican primary, and Clinton beat a vague entity called "Uncommitted" by a 55-to-40 percent margin.

Even though they privately nurtured few illusions that in Michigan they could escape the half-vote penalty exacted on Florida, the Clinton forces did hope that the state's delegation would be seated based on the primary results, which would net Clinton nine convention votes (18 flesh-and-blood delegates). They also had dreams of prevailing on an arcane, but conceivably significant, point: depriving Obama of any veto power over the delegates on the Michigan "Uncommitted" slate. Democratic rules buttressed the Clinton arguments over Michigan, since there is an overwhelming bias toward accepting primary results as valid and the "Uncommitted" option is, bizarrely enough, treated as if it were an actual candidate.

But politics is ultimately about votes, and Clinton -- even though she had 13 supporters on the rules committee -- did not have them. When the committee took test votes over lunch (and holdouts like Donna Brazile, Al Gore's 2000 campaign manager, finally chose sides), there was a surprising 14-to-13 majority for evenly dividing the Michigan delegation between Obama and Clinton. (The co-chairs of the committee, Alexis Herman and James Roosevelt, only vote in case of ties, while Mark Brewer, the Michigan party chairman, could not vote on matters affecting his state). Such a split-the-difference verdict in Michigan would have been the most generous possible outcome for Obama, since even the state party's own compromise proposal gave Clinton a five-vote (10-delegate) edge.

But the Obama supporters also recognized that overturning the results of the Michigan primary by a one-vote margin in the rules committee would be a Pyrrhic victory. Brewer warned his colleagues during the luncheon that such a result would ruin the Democratic Party in Michigan, since the Clinton supporters would be enraged over the sellout. Desperate to salvage anything from the wreckage, five Clinton supporters on the committee (Don Fowler, Mame Reilly, Elaine Kamarck, Michael Steed and Alice Huffman) belatedly embraced the compromise floated by Brewer and the Michigan party that awarded Clinton a 10-delegate edge. This required a bit of intellectual backtracking since during the earlier public session, Fowler, Reilly and Kamarck had all critiqued the Michigan proposal as arbitrary and irrational in its arithmetic that trimmed Clinton's 73-to-55 delegate margin from the primary to a 69-59 Clinton-Obama split.

When the committee turned its attention to Michigan during the one-hour evening session, Reilly, who would have run fellow Virginian Mark Warner's putative 2008 presidential campaign, introduced the compromise proposal. Fowler, the former national chairman of the Democratic Party and the patriarch of the rules committee, offered a public apology to Harold Ickes, an unbending Clinton supporter. The resolution, Fowler said, "does not represent the first choice of my candidate, Senator Hillary Clinton. But I think [it is] in the best interest of the party." Then he added, "But I say this to my good friend Harold Ickes -- I respect and love you."

Ickes -- deputy chief of staff in the Clinton White House and one of the great rules mavens of the Democratic Party since the 1960s -- had come back from the three-hour break looking distraught as he silently paced back and forth before the committee reconvened. Confronted with the apostasy of the Clinton defectors, Ickes thundered before the Michigan vote, "This motion will hijack, remove, four delegates won by Hillary Clinton. This body of 30 individuals has decided that they're going to substitute their judgment for 600,000 [Michigan] voters."

After the committee adjourned, Steed, a former DNC official, explained the logic behind the compromise in an interview, saying, "Our goal was what could be done to unify the party. The only unity proposal on the table was the Michigan proposal, so we accepted it." Kamarck, a former top Gore aide, put it simply, "It was the only answer."

In theory, Saturday's rules committee Michigan decision can be appealed to a new body -- the convention's Credentials Committee, when it comes into existence in July. Ickes, in fact, raised just that specter in his final remarks on the Michigan vote and the Clinton acolytes in the audience chanted, "Denver! Denver!" But, in reality, a formal challenge of Saturday's decision can only be brought by a Michigan convention delegate, not by the Clinton campaign itself. The odds are prodigious that -- under almost any scenario -- the four votes that Clinton theoretically lost in the rules committee will not matter by Denver.

Despite the marathon cable TV coverage and the breathless sense of showdown, Saturday's rules committee meeting was never really about Obama vs. Clinton. Rather, it was designed to paper over the Michigan and Florida disputes, while, at the same time, underscoring that states that hold illegally scheduled primaries will be penalized. Those accomplishments will probably matter far more than Clinton's Saturday bounty of 24 delegates.