Although she won Puerto Rico easily, Clinton seemed to be campaigning in an alternate reality, as hopes for the nomination slipped away. 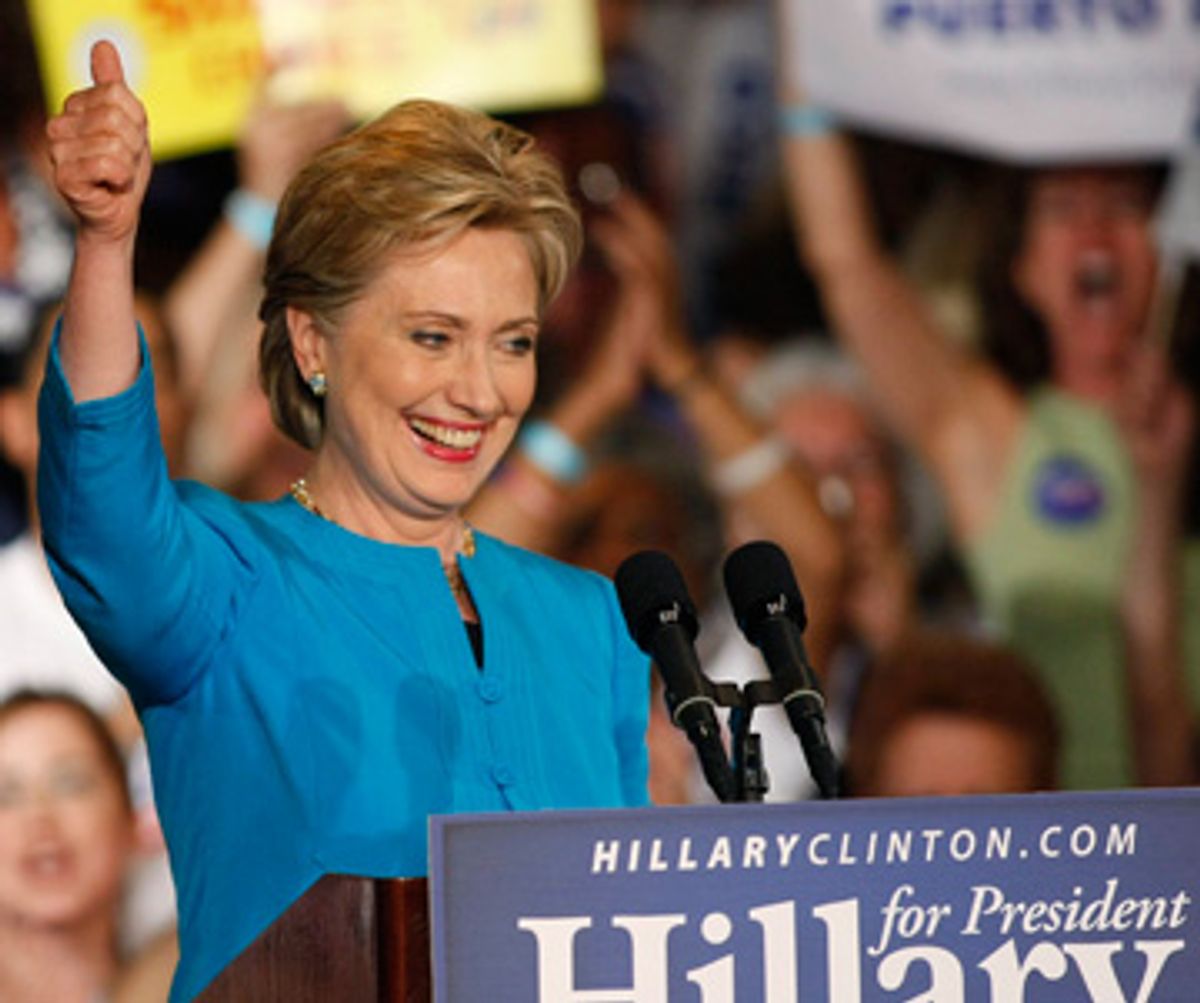 By the time the deal that probably finally sealed Hillary Clinton's political fate was reached in Washington early Saturday evening, she was far from the problems of delegates, superdelegates, half-delegates or anything of the sort. Geographically, of course, she was 1,500 miles away from the Democrats' Rules and Bylaws Committee meeting, but in spirit, she might as well have been on another planet.

For six hours Saturday, as her close advisors battled in a D.C. hotel ballroom to salvage some vague hope of rounding up enough delegates to stop Barack Obama from emerging as the Democratic nominee for president, Clinton hung out on the back of a souped-up pickup truck, chugging along at 20 miles per hour through the streets of San Juan's suburbs. She was just a few yards behind a semi loaded with several dozen giant speakers, blaring campaign slogans and theme songs loud enough to set off car alarms just by driving by. It was her final get-out-the-vote gambit in Puerto Rico, a full-on caravana, just like the local politicians do (and, as an announcer kept shouting over the P.A. system at Puerto Rican voters, "the way you would want" her to campaign). The legendary salsero Willie Colón sang, over and over again: "34 years of experience" -- the sound truck blasting the minute-long song nearly 50 times an hour, while occasionally switching to a reggaeton campaign anthem or a different salsa tune. "In any emergency, I'm going with Hillary, for her conviction and eloquence." It was catchier in Spanish, at least the first 100 times you heard it.

The effort, and all the other love Clinton threw Puerto Rico's way before the election -- including two trips in the last week and plenty of visits from Bill and Chelsea -- paid off: Clinton won the commonwealth's primary Sunday by a margin of 68-32, beating Obama handily and taking a majority of its 55 delegates to the convention. "I have four words for you," Clinton said Sunday afternoon, bidding the island farewell at a victory party. "Te quiero Puerto Rico!" ("I love you, Puerto Rico!")

But turnout among the island's residents, who don't often get excited about national politics, was so low that the win gave Clinton only a small bump in the overall popular vote -- which was the entire rationale for all of her time and energy here. Aides knew by the time they landed in San Juan Friday night (two hours late for a rally in a downtown plaza) that the treasure-trove of votes they once thought they'd find here wasn't likely to materialize. But the final vote total was even less than they'd expected.

So as her procedural hopes dimmed in Washington, and her popular-vote hopes were lowered in Puerto Rico, Clinton's final island sojourn blurred into a wistful alternate reality, one in which she was cruising toward the presidency instead of facing a near-certain end to her campaign in the coming days. At a stop at a hospital in Caguas, the first questioner addressed her as "President Clinton." Listening to the announcer on the caravana, you might not even realize there was another candidate on the ballot. "Puerto Ricans, this is your next and certain president!" the loudspeakers insisted, as if repeating it often enough -- and loudly enough -- might make it true. "This is the president for all Puerto Ricans!" In her brief speeches Friday night and Saturday, Clinton duly recited promises to decide Puerto Rico's status by the end of her (by now probably imaginary) first term in the Oval Office, and her supporters duly cheered them. It wasn't the first time the commonwealth's residents helped indulge a tourist's wishes to leave her problems back on the mainland, and it won't be the last.

To Clinton and her supporters, of course, the win in Puerto Rico was just one more piece of evidence in her favor that, frustratingly, the media and the superdelegates (which the Clinton team prefers to call "automatic delegates" for some reason) keep ignoring. Exit polls in state after state showed that she won the Latino vote; campaign chairman Terry McAuliffe said Sunday afternoon that Puerto Rico just showed, again, her strength among that key voting bloc.

And Clinton went ahead and declared herself the winner of the national popular vote Sunday, based in part on the Puerto Rico results and in part on the primaries she won in Michigan and Florida, which the Democratic National Committee recognized, in some fashion, at Saturday's meeting. "We are winning the popular vote, now there can be no doubt," she said. "The people have spoken, and you have chosen your candidate."

But most major presidential candidates wouldn't have spent six hours dancing to Willie Colón on the back of a pickup truck near the end of a close national campaign that they still thought they could win. This couldn't possibly have been the most efficient use of Hillary Clinton's time, unless she had nothing better to do than try for a few more votes in a primary where she was already virtually guaranteed a victory.

The trip to Puerto Rico -- following so closely after one on Memorial Day weekend -- could almost be labeled a working vacation for loyal staffers who may soon be out of a job. One press aide, usually deskbound in Arlington, Va., suddenly turned up in San Juan to help shuttle reporters on and off buses. Another let her battery-drained BlackBerry sit uselessly for most of the drive Saturday, plugging it in only when actually reading and replying to e-mail became more appealing than listening to "Hillary Clinton Para Presidenta," yet again. If you got past the ear-splitting volume and the mind-numbing repetition, the Saturday afternoon caravan was a leisurely meander through the suburbs in the tropics, with little for anyone on the Clinton payroll to do -- and little for Clinton to do, for that matter -- besides smile and wave at potential voters on the side of the road.

And at least one person in the campaign's enormous entourage seemed to enjoy herself. "I was so happy to be standing up in the pickup truck, waving at all of the people on the streets and in the cars who were driving by," Clinton said Saturday night, speaking at a service at Congregación Mita, a massive evangelical church (with a few unconventional beliefs) in Hato Rey, just outside the capital. "It was the most fun I think I've ever had campaigning anywhere."

If polls in South Dakota and Montana are any guide, Puerto Rico may prove to have been the site of Clinton's final victory speech of the campaign. She flew from San Juan to Sioux Falls, S.D., Sunday night, aiming to fight on to the end back on the mainland. But by Tuesday night, Clinton's Puerto Rican holiday may feel more distant, and the cold reality of returning from a vacation may sting even more than usual.